Channel One Russia is delivering 12 hours of live sports content to viewers back home, and its production philosophy is unique this year: a production gallery that is integrating commercials and other elements here in Tokyo and sending a complete show back home. It is also the first Olympic broadcaster to use EVS IPD-VIA. 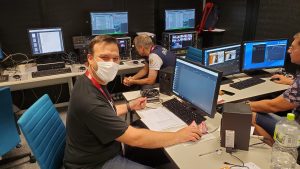 Olivier Dwelshauvers is overseeing EVS operations for Russia’s Channel One, including the Olympics debut of the EVS IPD-VIA.

EVS IPD-VIA is an asset-management system using web-based HTML5 applications and virtualized machines to allow the Channel One team to collaborate and produce from any device anywhere.

Two EVS PAM suites are in use with IPD-VIA, providing the applications needed for live-media-content browsing, control, edit, and playout.

“The editors edit in low resolution,” Dwelshauvers explains, “and then an EVS plug-in renders in high resolution and gives the team here access, or they can send it to Moscow for contribution to news or sports.”

It also provides access to the OBS Content+, and he notes that the team has 20 record channels for recording the live paths but can also dive into Content+ for action that might have been missed. “They can send what they want to their own system,” he adds.

Although many broadcasters in Tokyo adapted their plans from last year, Channel One remained steady. The EVS IPD-VIA would have been part of its plans if the Games had been held in 2020, and having the production-control room onsite allows the team at home to remain focused on local news and sports.