Dave Mazza, NBC Sports Group and NBC Olympics, SVP and CTO, says that following the PyeongChang Winter Games in 2018 the team had one goal: to make the move to IP, UHD and HDR? Initially HDR would take a back seat, primarily existing in a shadow cut of the HD show. But then the pandemic came, delaying the Summer Games, and closing the development gap with the 2022 Beijing Games. 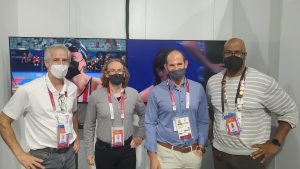 “When we realized that we only had six months between the Tokyo closing ceremony and the Beijing opening ceremony we realized that whatever we did here we would have to do there and that would mean missing out on HDR,” says Mazza. “So, we said, let’s pretend IP was already a raging success and also focus on UHD and HDR.”

The result is a massive effort at the IBC in Tokyo and back home in Stamford around 1080p and HDR production for primetime, golf coverage, and Olympic Channel linear content. It also required new developments to serve both HDR and SDR viewers without compromise.

First, OBS committed to producing every event in UHD and HDR. Mazza credits OBS for undertaking the Herculean effort to find 65 UHD flypacks & mobile units, let alone get them to Tokyo.

“I don’t know how they did it and got all of that working in true 4K HDR,” says Mazza. “But,  our 1080P HDR production layer would not have been possible if OBS had not made the shift to HDR.   And intermixing the OBS cams with our 1080P cameras is very seamless.”

Many of the Olympic productions involve a mix of OBS UHD feeds as well as NBC unilateral cameras. It’s up to Chip Adams, NBC Olympics, VP, Venue Engineering, and the teams at each venue to bring all this together. For example at Athletics the team takes UHD HDR split feeds from OBS convert them to 1080p HDR and integrate them into NBC’s unilateral camera’s running in 1080p HDR.

“That’s a pretty easy transition because it is just resolution, there are no look up tables (LUTs) needed,” says Adams. “We also take the OBS high speed cameras as 1080p SDR and [convert] them to HDR where we normalize them as HLG along with everything else. So that’s been very successful as working in one format is a lot easier than working in three. The NBC Tokyo trucks, flypacks, and edits are primarily working in 1080P HDR”

At the Tokyo IBC, NBC’s workflow requires taking the 4K HDR feed from OBS and down converting it to 1080p as the plant is built for 1080p HDR. NBC also sends a 1080i SDR signal to the broadcast center back in Stamford as the Stamford plant is in the process of transitioning  1080p HDR capable, but not there yet.

“Due to the many production enhancements, the sheer quantity of feeds to the USA (221 feed to the States and 101 coming back to Tokyo), and replay and super mo servers, file based workflows, RF links, etc. it was not feasible for us to do 4K at the scale of an Olympics.”

So, NBC elected to not reduce the overall storytelling ability simply for the sake of a resolution number.

“The overall picture quality through the entire chain is not only about resolution,” says Mazza. “We felt we could achieve a bigger win with the 1080p HDR, and the better HEVC compression, without having to compromise or reduce any of our production storytelling abilities. We have all the extra accoutrements that our Production teams wanted, and we think our audience expects. And we have at a stunning new level of picture and audio quality for a massively large scale sporting event.” 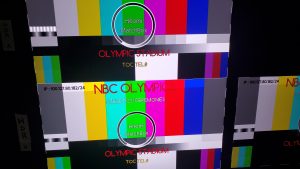 A look at the new test pattern NBC developed for its HDR needs.

NBC also had to create a production process that made it straightforward and easy for the production team to create content that did not have to be compromised for either HDR or SDR. The result was not only a new test pattern and color measurement process that enabled the creation of a set of Look Up Tables (LUTs) the enabled the artistic intent to transition between formats. Subsequently NBCU made these LUTs available to the entire industry to continue to spur collaboration and interoperability.

Michael Drazin, NBC Sports, director of production, engineering, and technology, says part of NBC’s philosophy is that while HDR gives additional color and dynamic range anything originating from SDR should present in the HDR space perfectly.

“A lot of our commercial content and anything that was created in SDR should map precisely in our HDR world,” he says. “And that’s why you see the consistency between our HDR and SDR deliverables, except in HDR, where you see all the additional dynamic range and color.”

Drazin adds that it was also important to make sure that from a workflow standpoint HDR was straightforward for the team to execute.

“It had to work the way we expect it to, from shading cameras to the editors…through graphics and augmented reality systems,” he says. “Using the NBCU LUTs the team is able to maintain the artistic intent throughout the entire process.” he adds. “Its been exciting to see the creative team transition to working in HDR and taking advantage of its new capabilities.”

One big goal was to have storytellers focused on the story, not the ultimate deliverable which could be HDR or SDR depending on which control room it is being delivered to. For example, a project may originally be due to air in HDR but then bumped to an SDR network. The production team wants to make sure the editor doesn’t need to get involved in that conversion process. Drazin says Darryl Jefferson, VP Post Production & Digital Workflow, NBC Sports & Olympics, and his team created a predictive system so that creatives could see how a change in HDR would impact SDR and vice versa.

“They can protect both deliverables at the same time and I think that is one of the most important operational things we’ve learned,” he says.

Adds Jefferson: “An editor’s base level might be HDR but in transit to Stamford it can be transformed to SDR so the team in Stamford can just pick it up and put it into a show. Everything is deterministic and we’ve done as much as we can so that everything is done for the end user and it’s in the right flavor.”

Mazza says that depending on what folder the content is put in the team knows where it’s headed and can then apply the look up table or up and down conversion.

The 1080p HDR production workflows were only part of the process as NBC also had to figure out how to deliver 4K HDR coverage to viewers including the local affiliates ability to roll their local breaks. The live 4K HDR coverage of the NBC Olympics primetime show would not have been possible without a way to localize it for NBC viewers back home.

“It will be a while before TV stations are able to fully broadcast in 4K HDR,” says Clarence Hau, NBCU, SVP, Operations and Technology. “In partnership with our NBC affiliates we undertook a major effort on a new NBC distribution system that seamlessly integrates local commercials into the NBC Olympics programming.” The one-year delay provided the time for NBC to figure out how to integrate each station’s local HD signal, together with the 4K HDR signal so local commercials are viewed by both audiences – a first for a domestic broadcast network. NBC was able to get this new system deployed at 52 stations in time for the Tokyo Olympics, translating to about 70% of the national market (look for a future report detailing those efforts).

The work that NBC has put in to deliver a 4K HDR service gives plenty of those who own a UHD HDR-capable set a reason to tune in. But watching 4K HDR content can be confusing (think of HD viewers believing they were watching HD when they were really watching stretch SD). Mazza says if you are at home watching the 4K HDR service there are some clues to know if you are dialed in properly.

First, if there is not an NBC bug in the upper right corner that says 4K HDR than it is not the 4K HDR service. And if the picture does not look like what you expect then you may need to dive deep into some TV settings as different providers are delivering in different formats and if the wrong format is used quality issues will arise.  NBCU and Comcast have chosen to distribute in PQ (aka HDR10) and many providers have followed suit.

If HDR10 is the incoming signal, and it looks very washed out or flat, your TV set is probably not set to HDR.

“It should automatically set itself, but it is ‘early days’ and sometimes the flags do not make it properly thru the STBs, receivers, soundbars, and TVs,” says Mazza. “The TV should present an indication that it’s in HDR. On the other hand, I believe that DirectTV emits HLG and, in that case, if your picture is under saturated, it is probably set to SDR, when it should be on HLG. If it’s way over saturated and very bright its probably set to HDR10.  Unfortunately, it is very easy to get wrong.”

The Olympics has provided arguably the widest variety of 4K HDR content to date in the world and Mazza says the outdoor events have benefitted the most from the move to UHD and HDR.

“The contrast in cumulus clouds in a sunny sky are different from the blurry blob of white in SDR,” he says. “And then the speculars in swimming or the shiny outfits in gymnastics are stunning in UHD, HDR, this makes it to the audience with the improvements with HEVC.

HDR brings to life the artistry in Opening Ceremony, it’s provides the audience the feeling of being outside for Athletics and beach volleyball when its combined with immersive audio.” (see article with NBC’s Karl Malone)

The process has not been an easy one, but it is indicative of the kind of innovation that an event like the Olympics and its stakeholders embrace.

“It’s a really complicated show, but we’re very happy with how the pictures look, the immersive audio sounds and we couldn’t be doing it without a whole lot of very hard working and talented people and innovation between both the NBC and OBS teams,” says Mazza.