Live From Tokyo Olympics: Chip Adams on Venue Operations and the Move to Fiber

NBC Olympics venue operations are always challenged by everything from weather to venue changes and even little things like traveling from the IBC to venues and from venue to venue. This year, those challenges expanded a bit with the arrival of UHD, HDR, and immersive audio. But, fortunately, some changes on the OBS front made those new challenges easier to deal with. 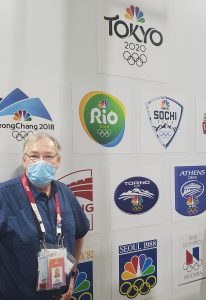 “The biggest infrastructure change has been to our benefit, and that is OBS moving the delivery of audio and video splits to fiber,” says Chip Adams, NBC Olympics, VP, venue engineering. “That has been very helpful: in the past, we’ve always struggled with where the trucks are parked in relationship to the OBS TOC, where we pick up the host-provided signals, and the problems that come with trying to move TV signals long distances over coax.”

The fiber infrastructure allows OBS to deliver 12-Gbps 4K camera signals optically and provides flexibility where the signals can be terminated.

The various NBC venue teams bring together the OBS signals along with NBC’s unilateral signals. NBC built venue conversion kits that take the optical fiber signal from OBS, convert it to electrical, and use a Grass Valley Miranda XIP signal processor to turn the 12-Gbps UHD feed into a 1080p 3G signal.

“We’ve also made the move to HDR at several venues,” Adams notes. “The signals that aren’t HDR, like the super-slo-mo splits and high-speed cameras, come over as 1080p SDR. Once [the signal is] converted to electrical 3 Gbps, we run it through a Cobalt processor or AJA FS-HDR converter to do the LUT conversion to get it to 1080p HDR we’re working with in the truck.”

NBC unilateral cameras, meanwhile, are on SMPTE hybrid fiber. If the cable distance is outside the operation range of SMPTE cable, the broadcaster uses SHEDS with fiber.

There has been plenty of pivoting at the Olympics, given the pandemic and one of the biggest pivots has been around the mixed zone, where reporters interview athletes.

“A traditional mixed zone is a 2-meter-sq. box where you have the reporter, cameraperson, A2, stage manager, PA, etc., supporting the interview,” says Adams. “It has changed in that now we can have only two people — the cameraperson and the reporter — in the mixed zone due to COVID countermeasures. This puts more responsibility on the cameraperson and reporter to have the shot framed, have their earpiece in, mic ready, and be all set for the interview. Also, the athletes are separated from the reporter by 8 ft. This poses a challenge when trying to frame the reporter for the questions and then zooming to the athlete for the response, and we try to frame the shot with the reporter asking the question and then zoom in. Trying to get that shot was difficult, but we worked through it.”

A production addition at the venues that may stick around is the Friends & Family effort that allowed U.S. athletes to see and talk with family members from the mixed zone.

“LTN helped us put together a Microsoft Teams-like call that we could route back into monitors in the mixed zone,” says Adams. “We give the athletes a throw-away earpiece to hear the return audio. I think that’s going to stick around as it brings people in and involves you with the story of the athlete and their families and [allows you to] participate in those joyous moments.”

Historically, one of the big concerns in the run-up to the Olympics is the readiness of the venues. Given the pandemic-related delay, those concerns were nonexistent.

“The Japanese did a fabulous job getting the venues ready,” says Adams. “The biggest challenge was some of the cable paths, but, as far as having the platforms ready, they were done a year ago. They also didn’t change too many things inside the venues. “

The only changes needed were some of the camera positions as the expected backdrop of crowds have been replaced by empty seats.

“Some of the shots that we had envisioned looked pretty empty without the fans,” explains Adams. “There were some last-minute camera changes to minimize the lack of crowds.”

The Tokyo Games have given the broader industry a preview of a future where the challenge will be to manage a variety of deliverable formats, such as UHD HDR, 1080p SDR, 1080i SDR, etc. For example, at the Hilton, where the primetime set is located, signals are shared between the Today show and NBC Olympics.

“We had two different sets of deliverables,” he says, “and we had to be careful about doing 1080p HDR for primetime and then giving the Today show 1080i. All the signals came back to the IBC at 1080p, and then we converted it here to 1080i before sending it to 30 Rock. We also had a 1080i copy at the Hilton that we would feed as a backup. It is really about understanding the deliverables and what people are expecting and what their infrastructure can handle.

“It has been a challenge on a lot of levels,” he continues, “but I’m very fortunate to have a great bunch of guys and gals that work for us as technical managers and maintenance people at the venues. The core group of Tom Perley, Doug McGee, Levi Phillippe, and Mike Drazen designs the workflows, prepares the equipment, deploys the systems, and supports the technicians onsite and are fabulous. With the support of our Field Shop operation of Billy Gahagan, Dave Person, Rick Ulmer, and Ilan Hamburg, they are tireless in their support getting the equipment out the door and installed in the venues. It’s a total team effort.”