With U.S. Olympics fans and athletes, friends, and families unable to attend the games in Tokyo NBC Olympics is doing the next best thing with watch parties designed to fill that void. “The bottom line is if Americans can’t travel to Tokyo, we intend to bring America to Tokyo,” says Molly Solomon, NBC Olympics, executive producer and president, NBC Olympics Production and executive producer, Golf Channel.

“We’ve been making plans to connect the U.S. athletes to their relatives back home and inject reactions and energy into the broadcast by integrating watch parties from the U.S.,” she says. “We’re treating friends and family, as we call it, like a sports venue in our strategic planning. The coordination of cameras each evening in primetime is rolling out with a team of athletes, bookers and technical support in Tokyo and stateside.”

The largest footprint will be at Universal Resorts in Orlando, FL where NBC Olympics, alongside the USOPC, are putting together a two-week long watch party in primetime where family members of Team USA will attend and be able to watch coverage and cheer for their loved ones together.

“We’re going to have a reporter there, Kerith Burke, and the ability to connect relatives with athletes,” she says. “We’re hoping for some chants, some spontaneous chants of ‘USA, USA!’ to erupt each evening each day as these invested fans band together and support their loved ones.”

She also says Olympian’s relatives have reached out to NBC. BMX world champion Hannah Roberts’ father is hosting a watch party on a big screen in an outdoor park in Buchanan, MI. 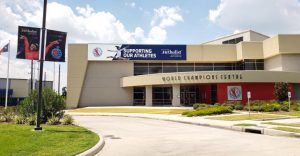 Simone Biles home gym in Spring, Texas, will be home to a watch party that will be part of the NBC Olympics broadcast.

“We’re also excited about two watch parties that Simone Biles’ gym in Spring, Texas where they’re creating an event for budding gymnasts who train there,” she says. “All of the budding gymnasts will spend the night, and then wake up the next morning and watch the women’s team final and the women’s all around. It’s really exciting stuff.”

“We believe there’s an opportunity to bring viewers closer to the action than ever,” she says. “And for sports like swimming, gymnastics, track, basketball, or beach volleyball, you’re going to hear the sounds of the games like you’ve never heard them before. From the thrashing and splashing in the pool to those intimate conversations between competitors and coaches.”

She points to gymnastics and the distinctive intricacies of each apparatus as an example of an event where the audio experience will take things to a new level for viewers at home. And the 2018 PyeongChang games offered a glimpse of what the broadcasts will sound like.

“When you look back at the downhill, the women’s downhill and the super G races in PyeongChang where we showcased Lindsey Vonn in that start house, and viewers could very clearly hear her breathing as she prepared for her runs,” he says. “It was incredibly dramatic, and we plan to access those kinds of sounds and moments in Tokyo.”

“We’re told that some of the sports venues may experiment with ambient crowd noise to generate atmosphere for the athletes,” she says. “That will be a work in progress, and you’ll hear that on the mix that NBC uses.”

With 339 distinct events, all which Solomon says have a different cadence and pace, it is impossible to be authentic and reflect the spirit and sound of each event.

“For example, in the breaststroke races, knowing that fans whistle during those races, we didn’t want to create an inauthentic experience,” she says. “We’ve pivoted to know that we’ve got access to all of these fields-of-play microphones. So, we really feel like we can enhance the sounds of the Games. But you will also hear any crowd presence that is being injected into the venue. You’ll hear it as the athletes hear it.”