Here’s something to ponder: Why is Galileo called Galileo? Other great astronomers and scientists are known by their last names: Copernicus, Kepler, Newton, etc. Tycho Brahe is known by his first name, but he was Danish, and that was their style at the time. Galileo’s compatriots were known by their last names, but he wasn’t. Why? And what (if anything) does it have to do with the technology of our industry?

This week, the National Academy of Television Arts & Sciences will be presenting its 63rd-annual Technology & Engineering Emmy Awards. Eight technologies will be honored. One is frequently called the Bloom Mobile (left), or, in the Academy’s language, “Development of Integrated, Deployable Systems for Live Reporting from Remote Environments.” Statues for it will be awarded to journalist David Bloom (posthumously), NBC, and MTN Satellite communications.

That was by no means the first time the Academy found satellite-related technology to be Emmy-worthy. In 2011, HBO and Elmer Musser got awards for satellite-transmitter identification; in 2010, the Metropolitan Opera won for the technology (including satellite delivery) of its global cinemacasts. PanAmSat and DirecTV were honored with 2006 awards, AT&T for the first intercontinental satellite transmission with a 2005 award, DirecTV and EchoStar for their spot-beam work with 2004 awards, etc., all the way back to 1966 awards to Hughes Aircraft and Comsat for the Early Bird satellite (right).

Early Bird (or Intelsat-1) wasn’t the first satellite. It wasn’t even the first artificial satellite (that was Sputnik, a model of which is shown at left,) or even the first commercial communications satellite to carry television signals (Telstar, right). Sputnik was launched in 1957 and Telstar in 1962. Early Bird wasn’t launched until 1965, by which time “live via satellite” was already a well-known phrase on TV.

Telstar was the reason for the 2005 AT&T award (the Academy sometimes takes a long time to get around to its awards; the statues for the 1940-41 work of the first National Television System Committee, or NTSC — not even the second one, which standardized NTSC color — were presented in 2010). If Telstar laid the groundwork, however, why (other than its name) did Early Bird get the earlier award?

It’s because of the orbit that Early Bird was placed in, a geostationary orbit. If a satellite is put into an orbit of 35,786 km (22,236 mi) above mean sea level (a geosynchronous orbit), then it will take it about 23 hours 56 minutes and 4 seconds to complete a trip around the planet, the same amount of time it takes the earth to spin on its axis. If the orbit is over the equator and heading east, therefore, the object in orbit will appear to be at a fixed position in the sky (a geostationary orbit). 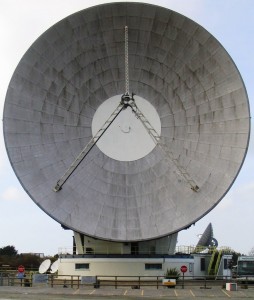 What’s so special about a geostationary orbit? Consider Arthur (left). Arthur was the first antenna at the Goonhilly Satellite Earth Station in Cornwall, England. It was named for the Camelot king, whose legendary castle was not far away (other dishes there include Merlin, Guinevere, and Lancelot). Arthur was built in 1962, for use with Telstar. Arthur is 25.9 meters (85 feet) in diameter and weighs 1.118 gigagrams (more than 1,232 tons). Telstar, unfortunately, did not have a geostationary orbit, so Arthur, all 1,232+ tons of him, had to move to track the satellite across the sky. Not only was moving such a big dish an extraordinary task, but, even with the movement, the satellite connection was possible only during that portion of the orbit when the satellite could be “seen” by both the transmitting and receiving antennas (about 20 minutes for a transatlantic hop). 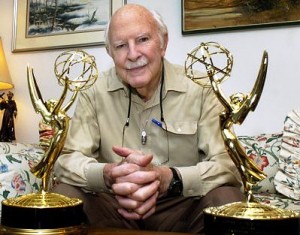 Merlin, at 32 meters (105 feet) in diameter, is even bigger, but, by the time it was put into service, geostationary satellites had eliminated the need for tracking and made full-time satellite communications possible. Not only home satellite TV but also modern cable TV might not have been possible without that orbit. In fact, when the Academy honored Hubert Schlafly (right) for multichannel cable-TV technology in 1992, part of the reason was Schlafly’s nationwide geostationary-satellite reception testing in the early 1970s (the second statue shown was for his work on the through-the-lens prompter).

Early Bird was the first commercial geostationary communications satellite, but Syncom-3 beat it by a year and actually carried television coverage of the 1964 Olympic Games live from Tokyo to North America (Syncom-1 was lost, and Syncom-2’s orbit wasn’t equatorial, so antenna tracking was required). And where did the idea of having an earth-synchronized communications satellite come from? John Pierce, a satellite engineer working at Bell Labs, lectured on the subject in 1954 (published in 1955), but the Academy chose to honor in 1982 even earlier work by a different satellite-related Arthur, Arthur C. Clarke.

Probably best known as the author of 2001: A Space Odyssey, Clarke was a radar specialist during World War II and, even before the war was over, wrote a letter, on behalf of the British Interplanetary Society, to Wireless World magazine (published in February 1945). It was called “Peacetime Uses for V2,” a reference to the German attack rockets, and it contained the following sentences. “An ‘artificial satellite’ at the correct distance from the earth would make one revolution every 24 hours; i.e., it would remain stationary above the same spot and would be within optical range of nearly half the earth’s surface. Three repeater stations, 120 degrees apart in the correct orbit, could give television and microwave coverage to the entire planet.”

In the October 1945 issue of the same periodical, he published a highly detailed, illustrated, four-page paper called “Extra-Terrestrial Relays: Can Rocket Stations Give World-wide Radio Coverage?” A portion of Figure 3 from the paper is shown above. Thanks to that paper, the geostationary orbit is sometimes referred to as “the Clarke orbit.” But he wasn’t the first, either.

Clarke’s paper cites, as its third reference, Das Problem der Befahrung des Weltraums (The Problem of Space Travel), by Hermann Noordung. Noordung was the pseudonym for Herman Potočnik, a rocket scientist who died in 1929. The referenced book, though Clarke’s paper didn’t cite the date, was published in 1928, and it describes not only the geostationary orbit but also communications between something parked there and the ground. The “something” was likely to be a large, spinning, circular space station of the sort seen in the movie 2001: A Space Odyssey. A portion of an illustration from the book is shown below. Note the dish at “top” (nominally actually the earth-facing bottom).

Although Potočnik might have been the first to describe communication between an object in geostationary orbit and the earth, he was by no means the first to describe the orbit itself. In 1895, for example, Konstantin Tsiolkovsky, a Russian scientist, proposed a means of moving things to a “castle” in a geostationary orbit via something now called a space elevator. The idea came to him when he saw the slightly older Eiffel Tower. Although no space elevator has yet been achieved, neither has the concept been rejected. At right is an illustration of NASA’s conception of the idea (click on it for a larger view).

If the geostationary orbit has been known since the 19th century, just how old is it? Well, that space has existed as long as the earth has — about 4.5 billion years, by the latest reckoning (and, although there’s not as much data about it, it appears that our oldest satellite, the moon, is almost as old). So, perhaps the question should be rephrased. How long ago might someone have come up with the distance of a geostationary orbit?

The idea that orbital duration is tied to orbital distance may be found in Johannes Kepler’s third law of planetary motion. And where did that idea come from? The answer involves a false nose, a suppressed need to urinate, a trial for witchcraft, and the reason Galileo is called Galileo. 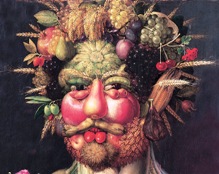 It begins at the court of the Holy Roman Emperor, Rudolph II. He’s shown at left as the Roman god of plant growth, Vertumnus, in a portion of a painting by Giuseppe Arcimboldo around 1591. Arcimboldo was not only the imperial painter but was also entertainment director and fountain designer. A fellow imperial fountain designer was Cornelis Drebbel, who built what is probably the first navigable submarine (possibly with rebreather air supply) and an air-conditioning system. The court also included the poet Elizabeth Jane Weston, the medical doctor and botanist Carolus Clusius, and (among others) the aforementioned Tycho and Kepler.

Tycho, the last of the great naked-eye astronomers, is shown at right in an image of a statue in a Ripley’s Believe It or Not museum, where he’s called “The Man with the Golden Nose” (like the gunfighter Tim Strawn in the movie Cat Ballou, he lost his real nose in a duel). He was working for Rudolph on a data book about the orbits of celestial objects with Kepler as his assistant, but his nose wasn’t the only strange aspect of his life. His pet moose, for example, died from a fall down a flight of stairs after drinking too much beer. Tycho, too, might have had a death associated with drinking. At an imperial banquet, he reportedly resisted an urge to urinate and might have died as a result (others have recently suggested mercury poisoning). In any case, Kepler took over the task of completing the Rudolphine Tables.

Based on that work, Kepler published Astronomia Nova (the New Astronomy) in 1609, crediting both Rudolph and Tycho on the title page (left). The highly regarded book contains the first two of Kepler’s three laws of planetary motion: that objects move in elliptical orbits, with the object they’re orbiting at one focus of the ellipse (providing tremendous support to the idea of a sun-centered universe) and that a line connecting the orbital body to the body being orbited sweeps equal areas of the ellipse in equal times.

Those are important scientific laws, but they do not suggest a geostationary satellite orbit. That is suggested in Kepler’s third law. Kepler published eight more books by 1618, but not one of them hinted at the third law. And then there was his mother’s trial for witchcraft.

Kepler undertook his mother’s defense, which meant a long trip from his home to the site of the trial. So he took along something to read, a book on musicology and music theory, published in 1581. That book so influenced Kepler that he wrote and published another book, Harmonices Mundi (The Harmonies of the World), in 1619, before the trial was finished. It contains the third law of planetary motion, the one that makes the calculation of a geostationary orbit possible. It also offers appreciation to the author of the 1581 book for helping to shape Kepler’s thoughts. 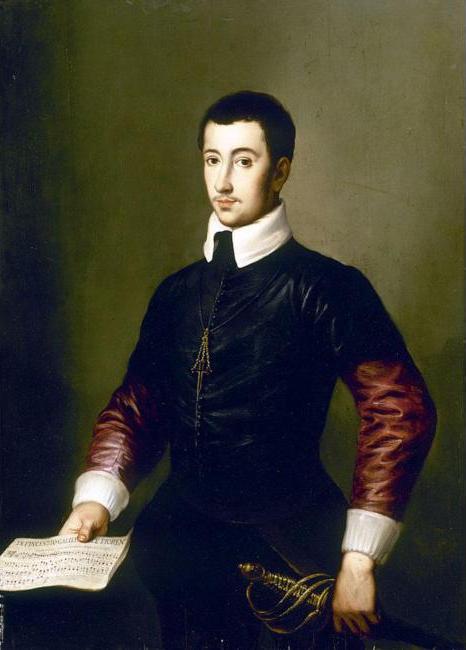 That author also helped shape the thinking of another famous scientist, Galileo, whom he taught the importance of experimentation. “It appears to me that those who rely simply on the weight of authority to prove any assertion, without searching out the arguments to support it, act absurdly.” He also taught Galileo to play the lute, a practice that served the scientist well when he studied acceleration due to gravity by rolling objects down an inclined plane equipped with bumps like the frets on a lute’s neck; Galileo used the sounds of the objects hitting the bumps to determine their velocities. And the author of that 1581 book was responsible for our calling Galileo Galileo in two senses.

That’s why Galileo is called Galileo and what it has to do with our industry. Now you know.