The 100th running of the Indianapolis 500 (May 29, 11 a.m. ET, ESPN), annually one of ESPN’s largest and most complex television productions, will sport a microphone complement worthy of the iconic race’s century mark. ESPN will deploy a total of 287 mics covering the track, the cars, and the talent; 235 of those will be used for sound effects, the most ever laid out for a motorsport event. The remaining 52 mics will be split evenly between on-air talent and 26 of the 33 competing in the race. There will also be three onboard cameras in each of 12 of the cars. 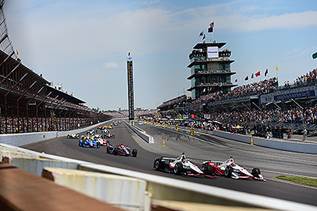 The massive microphone deployment matches an equally sizable camera complement for the production: 100 cameras, one for each year the race has been run. Four uplinks and 16 transmission paths will be used, and 170,000 ft. of fiber cable will connect the equipment. Some 200 people will be part of the production.

There will also be plenty of announce and package audio. For the telecast, lead announcer Allen Bestwick will be joined in the booth by former series drivers Scott Goodyear and Eddie Cheever providing analysis. The announce team will also include pit reporters Jon Beekhuis, Rick DeBruhl, and Dr. Jerry Punch. SportsCenter anchor Lindsay Czarniak will host the pre-race show from the Speedway’s Pagoda. “Legends of the Speedway,” a roundtable discussion with the only four-time winners of the Indianapolis 500 — A.J. Foyt, Al Unser, and Rick Mears — will be moderated by Bestwick. And SportsCenter will have an expanded presence at Indianapolis Motor Speedway.

Audio Flexibility
According to Kevin Cleary, specialist, remote production operations, ESPN, the flexibility of the Calrec consoles aboard NEP’s SS21 triad of remote-production trucks enables managing the many audio-input sources.

“We have Calrec’s Hydra network used throughout the track,” he says. “That and the consoles allow us to manage that much audio. When you have that much glass [a reference to cameras] around the track, it translates into a heck of a lot of microphones. The channel counts have become massive as the shows become more complex.”

For this year’s race, A1 Denis Ryan and submixer Steve Urick will reprise their roles from NEP SS21, Ryan working from the B unit and Urick in the C unit. The A unit will handle production and graphics; the B unit will also house EVS operations.

Some of the new locations for effects microphones for this race include those accompanying four cameras over the top of the pits. Mics will also be placed at the feet of the gunners performing the 21-gun salute before the race, picking up the sound of the shell casings hitting the ground. (Seven cannons each firing three times help keep that area compact.)

“There’s a lot of nuanced sound for this event,” Cleary says, adding that other audio sources will include a direct feed from a DJ for live music during the preshow events.

Helping manage all the sound effects is a trick devised by Urick: he’ll build a bed of ambient sound, comprising some effects and crowd sources, that will serve as a consistent foundation for much of the race but is generic enough that key effects sounds can cut through it easily. Those sources are grouped and routed through an Ernie Ball volume pedal (the kind typically used by guitarists in rock bands) tucked under the console and set to the fully on position most of the time. When the director calls for a quick cut to the interior of a car, Urick is able to instantly attenuate that foundational track, subliminally adding to the shift in perspective that transports the viewer sharply from the grandstand into the cockpit.

This year, the Iconix “grass cams” return to the show. These are loaded with Electro-Voice 635A dynamic microphones (a change from last year’s AKG C535s), which Cleary says can better withstand the pounding they get as the cars pass over (and sometimes run over) them. Positioned inside turns 1 and 3, the grass cams are paired with Sennheiser SK250 transmitters. These and other wireless microphones, including the team and driver audio, are supplied by Broadcast Sports Inc. (BSI).

The Indianapolis 500 has been produced in discrete 5.1 surround almost as long as the network has used that format, which vividly enhances the Doppler effect of cars approaching and passing key points along the track, such as the four turns. It also reinforces the authenticity of the in-car scenes.

“When we go to the in-car shots and the sound wraps around you, you really feel like you’re in that car,” Cleary says. “Motorsports are especially good for surround, and the Indy 500 translates so well in 5.1. This is what the word immersive really means.”