Ease of use, better sound quality, and reliability: A new study by Sennheiser and Millward Brown reveals these to be the top three unmet demands of managers running remote conferences. Sennheiser’s TeamConnect Wireless brings to an end the age of conference-call frustrations, delivering unmatched ease of use and excellent sound quality in a portable system for up to 24 participants. 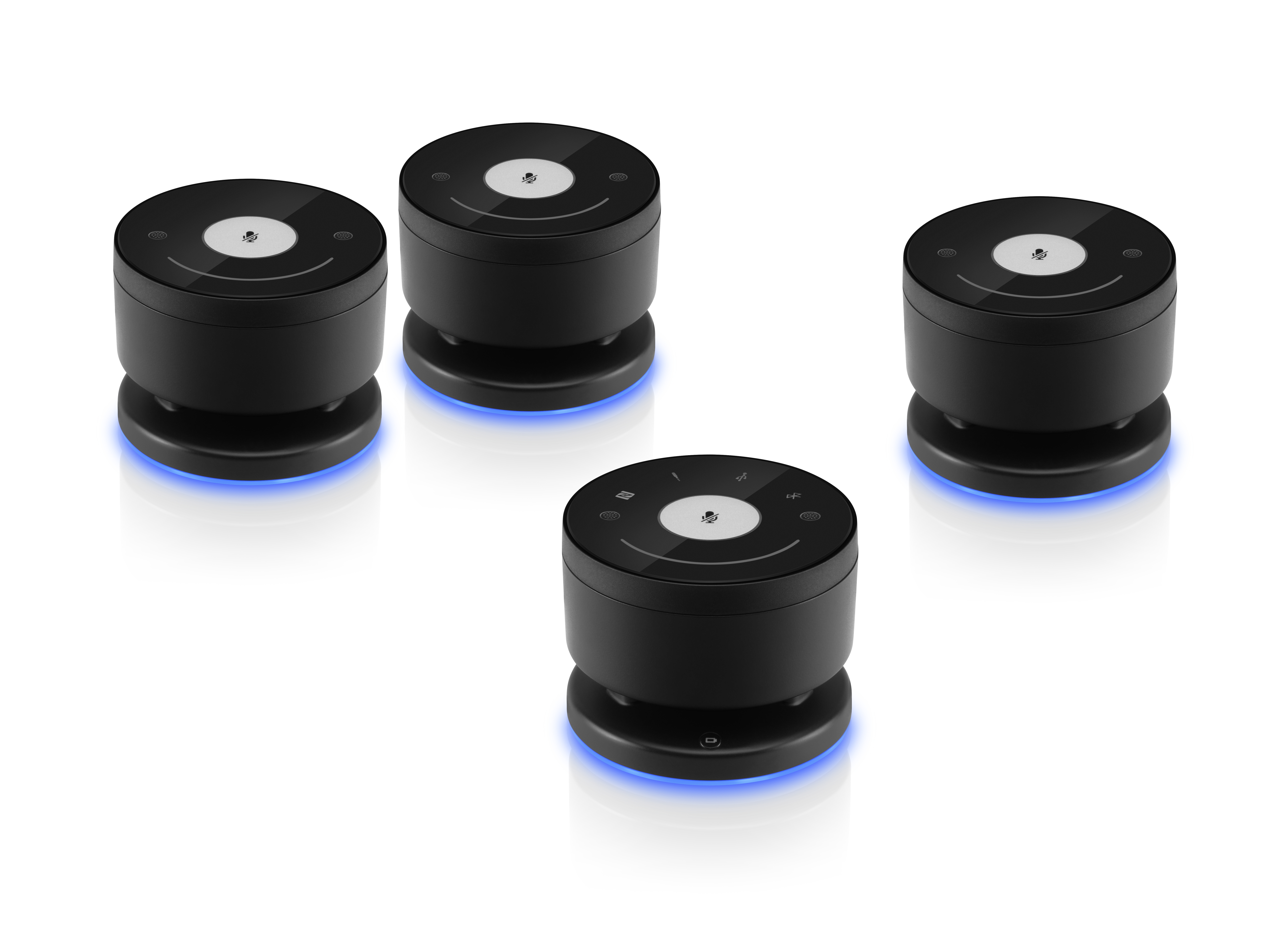 At InfoComm 2016 (booth C10908), the audio specialist will be expanding its new wireless conferencing system with an alternative charging base for permanent meeting rooms. Alongside the current carry-case option for ad hoc meetings, the TeamConnect Wireless family now offers the ideal wireless conferencing solution to meet the needs of today’s businesses.

As companies work increasingly flexibly across multiple locations and geographies, the conference call has become an essential stage for business achievement. Today’s meetings can happen anywhere. With teams often spread across many locations, it’s mission-critical to successfully bring people together, because only a connected team can perform to its full potential. Even so, too often, conferences don’t run smoothly, hampered by technical challenges or offering poor sound quality that makes it difficult for participants to be understood.

This has a direct impact on business performance: a study by Sennheiser and Millward Brown released in January has revealed that successful companies have strong internal connections and run a higher frequency of meetings, while lower performers meet less often. The study also discovered that barriers in sound quality and usability of meeting technology leads to lower frequency of meetings, with managers demanding that future solutions should be reliable, offering better sound quality and intuitive ease of use.

TeamConnect Wireless from Sennheiser is the cure for these business pain points, offering a high-performing portable conference solution for up to 24 people that can be used by anyone anywhere. It provides unmatched ease of use, speed of setup, and cutting-edge connectivity that fits seamlessly into the independent, “bring-your-own-device” ethos of the most fast-moving and flexible of modern workplaces — all with the audio specialist’s trademark high-quality audio.

The stylish portable solution is made up of four units: one master and three satellites. The units are wirelessly linked by a DECT connection and provide a flexible system that can be set up in virtually any room or table arrangement.

Connect smart devices, computers, or landlines
TeamConnect Wireless offers peerless connectivity options, making any device immediately capable of establishing a professional-quality conference call in seconds. Users can quickly connect their own Bluetooth smart device or computer wirelessly, with NFC simplifying pairing with compatible devices. Wired connections are also possible via USB — ideal for web or video conferencing via a computer — or 3.5-mm jack cable, enabling it to readily fit into a broad range of hardware setups.

Control everything at a touch
The system brings a new level of usability to conferencing that makes it easy for anyone to operate with minimal instruction, eliminating the need for technical support. When slid from the case, the four units automatically power up and link together. The intuitive, touch-sensitive control panel on the master unit allows connection of devices and control calls; the satellite units have touch controls for muting or adjusting volume. TeamConnect Wireless supports multiple simultaneous audio channels, so additional callers can be joined to an existing conference by just connecting another device. TeamConnect Wireless is optimized for IP solutions, which includes Skype for Business, Cisco Jabber, Webex, and Go-To-Meeting.

Sounds great, looks beautiful
With setup taking no time at all, TeamConnect Wireless sets the stage for a brilliant meeting. As a Sennheiser product, it delivers excellent acoustic clarity and speech intelligibility, which allows natural conversation and improved meeting productivity.

Alongside leading-edge functionality, TeamConnect Wireless is designed to be at home in even the most prestigious office environments. Use of premium materials, such as glass and aluminum, makes the system tough enough to be taken anywhere, while conveying an unmistakable business-class elegance — a fact recognized when it was named a Best of the Best product at the prestigious Red Dot Design Award 2016.

With its innovative design and sound features, TeamConnect Wireless embodies Sennheiser’s ambition to make the future of audio technology tangible to customers. Niemann explains how the new product aligns to Sennheiser’s overall company vision “Shape the Future of Audio”: “With TeamConnect Wireless, Sennheiser has boldly staked out its leadership in professional conferencing. It is the simplest and fastest way to set up professional-quality conferences, no matter the user, device, room, or table setup, providing brilliant sound for easier communication and more-successful meetings. This is truly the future of audio in today’s workplace.”

Offering very high-quality audio with utterly unobtrusive design, TeamConnect Ceiling provides the perfect solution for meeting spaces where cables, holes for installation, or table microphones are undesirable for either aesthetic or practical purposes. Just one SpeechLine Ceiling microphone can cover as much as 60 sq. meters, making it ideal for medium or large conference rooms. The system can be easily expanded with additional microphones. Installation, configuration, and everyday use require minimum effort, and the cable-free, tethered design ensures that the system is protected from wear and tear.

TeamConnect Ceiling is an expansion of the conferencing system the company launched in 2014. The solution also comprises a central-unit CU1 offering an interface for network integration, SpeechLine microphones, and active loudspeakers. Thanks to three optional installation variants, the high-quality Unified Communication solution is easily integrated into every existing room infrastructure, making it the optimal tool for professional remote-conferencing applications.

The fixed SpeechLine microphone can be mounted either onto or nearly invisibly flush with the ceiling itself. TeamConnect Ceiling is designed to fit within the space of a standard 600-mm2 (2-ft.) ceiling panel, making it easier to install discreetly. Intuitive colored LED lights indicate when the system is muted or in operation complete the overall subtle impression.

Sennheiser’s new ceiling microphone frees users from the limitations of table-mounted mics, offering greater flexibility and ensuring great sound quality through innovative beamforming technology that automatically focuses on whichever person within a range of 60 sq. meters is speaking. No matter how dynamic the speaker, TeamConnect Ceiling offers excellent speech clarity, so participants can feel free to sit, stand, or move around.

“We are delighted to present another conferencing solution within our Sennheiser TeamConnect family,” says Jens Werner, portfolio manager, business communication, Sennheiser. “TeamConnect Ceiling draws on Sennheiser’s 70 years of audio expertise to deliver excellent audio quality in an innovative design. It is very easy to use, virtually invisible when installed, and provides unsurpassed positioning flexibility for business conferences.”

MobileConnect
MobileConnect provides live audio streaming to mobile devices for the very first time. The universal system uses a WiFi connection to stream lip-sync audio content to the user’s smartphone, which has an app that instantly converts it into a mobile receiver. Applications are unlimited: whether it is in a theater, a museum, a university auditorium, or a company, MobileConnect can be quickly and easily installed and is also cost-efficient in use. Thanks to its almost latency-free transmission of audio content, MobileConnect is aimed primarily at assistive-listening and audio-description applications, but the solution can also be used for simultaneous interpretation.

MobileConnect consists of a streaming server providing the audio stream over WiFi, which users can connect to via the MobileConnect app on their own smartphone. The selected audio data are transferred to the device via the new free MobileConnect multichannel app, enabling users to play the content conveniently through headphones. Applications are unlimited: whether it is in a university, theater, museum, or conference center, MobileConnect can be quickly and easily installed and can offer a cost-effective way to complement digital signage or offer assistive listening. This user-friendliness of the system is not just for end users: MobileConnect can be installed in a few easy steps for rapid deployment.

“The start of 2016 will see major changes for MobileConnect. Installations in Germany, the UK, and the U.S. have demonstrated the enthusiasm our customers have for this product and shown that we can go even further,” says Xenios C. Maroudas, portfolio manager, business communication, Sennheiser. “We have dramatically reworked and optimized the design of the MobileConnect app, placing even more easy-to-use functionality into the hands of users to open up an even broader range of applications.”

Launched in February, Sennheiser’s new MobileConnect app version takes the immediacy and functionality of the service to new levels. Users can now access the Personal Hearing Assistant straight from the channel screen, and the user interface of the Personal Hearing Assistant has been optimized for even greater user-friendliness. The MobileConnect app interface is now available in German, English, French, and Spanish.

“With MobileConnect, we gave our customers an innovative real-time streaming-based technology that was built around the bring-your-own-device ethos,” says Maroudas. “This solution lets end users easily receive audio content on a device they already know. It’s as easy as downloading the free MobileConnect app to their smartphone. At the same time, event organizers are no longer faced with the cost of providing, renting, and maintaining the audio devices.”

But cost-efficient application is not the only feature that makes MobileConnect interesting for integrators, companies, or event organizers: “Additional features such as assistive listening in theaters, the provision of an audio track for silent screens in airport waiting lounges, or simultaneous interpreting for public performances mean that MobileConnect enables our customers to upgrade and expand their range of possibilities,” Maroudas adds.

Furthermore, the MobileConnect innovative streaming solution offers universal application. It can even be used in situations when audio transmission has been impossible or only very limited, he explains: “It opens up completely new opportunities in the field of digital signage as well as in many areas of assistive listening.” Systems houses and integrators can not only offer existing customers an innovative solution for familiar scenarios but also acquire completely new customers.

Sennheiser’s MobileConnect has already seen two years of successfully deployment since its initial pilot projects in 2014. It has been installed in several theaters, such as Deutsches Schauspielhaus or the Ernst Deutsch Theater, both in Hamburg, Germany. Alongside these deployments, the company also launched the CinemaConnect app, which works on the same technical principals as MobileConnect but is designed for use in cinemas. CinemaConnect provides audio description and assistive listening in cinemas, offering inclusive solutions for cinemagoers who have a visual or hearing impairment. The CinemaConnect solution has been in use in the Abaton cinema in Hamburg since May 2014.