Just prior to the start of the 2016 season, the University of Kansas unveiled the result of a multimillion-dollar upgrade to its football locker rooms. Located on the first floor of the Anderson Family Football Complex — adjacent to Memorial Stadium on the school’s Lawrence, KS, campus — the locker room now features custom UHD LED displays atop each player’s locker, made possible by Neoti. 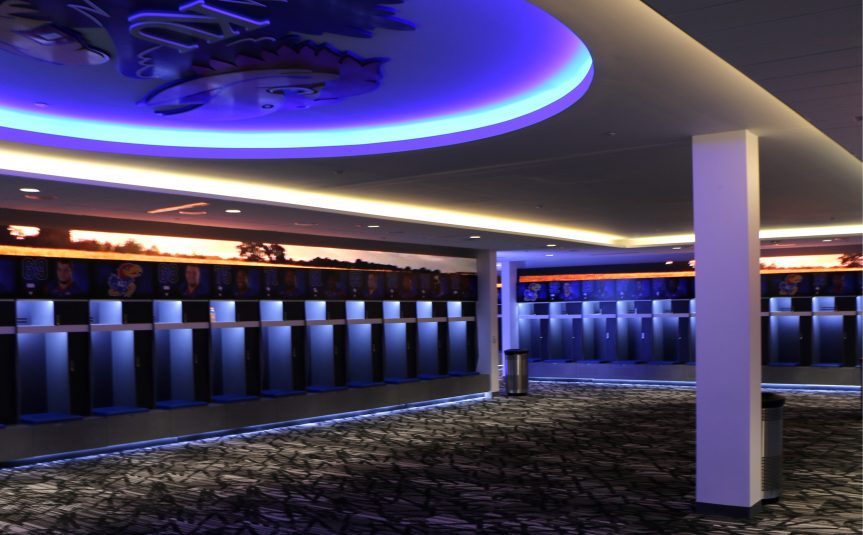 “I’ve never seen anything like this to this extent, because it is a seamless LED videoboard that wraps around the entire locker room,” says Jeff Love, director, football technology, University of Kansas. “It’s very cool. We didn’t have anything even remotely close to this beforehand.”

According to Love, the team was looking for a video solution that could be sectioned off and used to personalize each player’s locker or run as a single display, surrounding the room with streaming video of a Kansas wheat field, for example, or a drone flyover of the campus.

“We change [the displays] to relate to the situation,” he explains. “For spring football, we had a couple guys who are playing in the NFL come back , and we were able to put their Kansas highlights on these boards as they were walking in and touring the new locker room. Day to day, it’s to motivate the players and for recruiting.”

In order to replicate the Jayhawks’ vision, Neoti created a custom bracket system and collaborated with Coleder to manufacture a custom wiring system. The team produces video content on a laptop using Adobe After Effects and Premier, playing it off two media servers, each with six 4K-capable outputs.

KU’s Brad Nachtigal, associate athletics director, operation/capital projects, and Brad Bieker, IT manager for athletics, spearheaded the project for KU from the beginning; Love joined KU in July — near the end of the project — and worked with Neoti Project Manager Aaron Kipfer to build the content that would play out on the displays.

“The system itself is laid out in sections and different regions with different pixel resolution, and [I worked with Jeff Love to] define where we wanted these sections to be,” says Kipfer. “Then, [I helped] him create templates for creating this content. … We prebuilt for him all of the templates and all of the initial pieces of content — he provided the actual files, but we prebuilt and set up everything for him — so that, on day one, they had content up and running.”

In total, KU athletics raised more than $2 million to overhaul the locker rooms inside the Anderson Family Football Complex, which was built in 2008. The revamped room also features an upgraded lighting system, sound system, and new players lounge.

“We’ve got a really family-driven environment here, and so we wanted something to give [players] a home base, if you will,” says Love. “These LED screens were kind of the finishing touches of that, so, when you walk in, the wow factor is there.”