AES Meets NAB in NYC, and Everyone’s a Winner

The first co-located AES Show and NAB Show, whose dates overlapped on Oct. 18 and 19, turned out largely and, to some, unexpectedly well.

The NAB New York 2017 event, which occupied one of two adjacent halls on the main level of Manhattan’s Javits Center, was the blended outcome of two other media-technology shows that had used that space and those times, CCW and SatCom, which NAB acquired in 2014. The broadcasters organization fashioned them into a venue to showcase the latest in digital editing, motion graphics, HD technologies, and more, focused on content-creation needs. 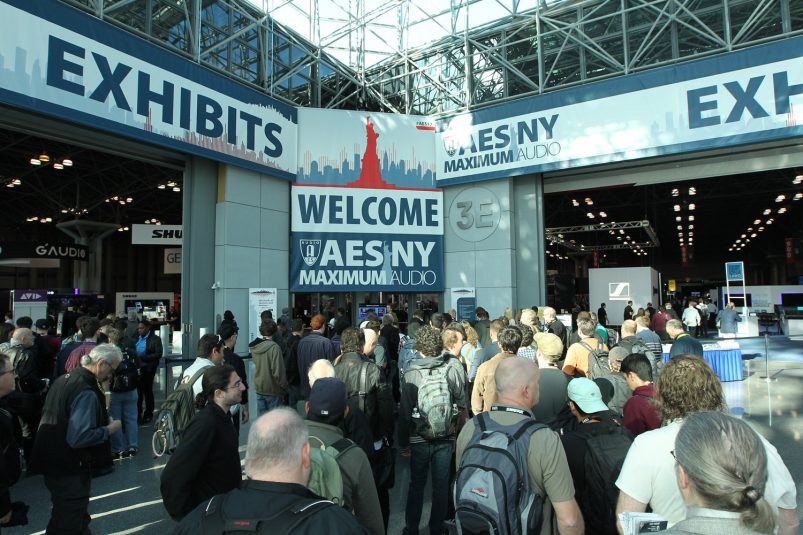 Registrations for the AES New York 2017 Show were up from last year’s attendance.

Next door was the AES New York 2017 Show. The annual confab of the Audio Engineering Society’s event focused on professional audio equipment and related matters. The show, historically focused on music production, had been losing traction for years: for the first time, the number of exhibitors slipped below 300 in 2015, as attendee numbers fell from 20,000 in 2005 to more than 18,000 in both 2013 and 2015 and to 13,000 last year. (This year’s attendee numbers have not been released yet, but registrations were reported as 15,563.)

This year’s co-location with the unified NAB event saw the AES Show draw both increased combined numbers and optimism, at least partly as a result of some of the gravitational pull of the larger NAB New York event. The word synergy was heard often on the AES show floor.

“This has been like a little, local [Society of Broadcast Engineers] meeting,” said Vinnie Macri, product marketing manager, Clear-Com, which along with a handful of other audio-centric companies — including SSL, Riedel, and Lawo —maintained a small stand on the NAB side of the Javits. “It’s a great way to get more focus on audio from the broadcast perspective. Plus, there are a lot of really good sessions around audio here, and more of them. And it’s New York, where we have a lot of broadcast-centric customers.”

Noted Colleen Goodsir, director, sales and marketing, at wireless-microphone-system manufacturer Zaxcom, which usually exhibits at both shows. “It feels like an AES show, only better. It’s a lot busier than the [previous AES Show], which is a good thing.”

Lawo Director, Marketing and Communications, Andreas Hilmer liked the increased floor traffic that the co-located shows brought to the audio side. However, he said, he would prefer that it be held in a single large hall because “the distinctions between audio and video are less than they used to be.”

Others appreciated the separation. Sennheiser Director of U.S. Spectrum Affairs Joe Ciaudelli liked the much larger (and main-level) space that the AES Show occupied this year vs. the harder-to-reach lower-level space of the past, as well as the increased attendee traffic between both halls. “It’s been an extremely positive show,” he said.

The organizations have jointly announced that they will reprise the merged expo next year, Oct. 17-20, 2018, again at the Javits Center.

A few companies may take advantage of the bifurcated exhibition next year. Chris Fichera, partner and VP, Group One Ltd., which markets both DiGiCo consoles and Blue Sky monitors in the U.S., said the haul between the halls would make a perfect demonstration of signal transport over IP. “Hey, if we have to work with two separate halls,” said Fichera, whose DiGiCo brand shares ownership with broadcast-console manufacturer Calrec, “we might as well leverage it.”

Panel Coverage
The combined show offered the AES some room to prepare an extensive conference program. Although much of that is still focused on music production (and, in recent years, on live sound production as well), elements of the program were of significant interest to broadcast-audio professionals.

Most notable among these panels was Wednesday’s look at the still-changing RF repack, by a panel comprising Mark Brunner of Shure, Sennheiser’s Ciaudelli, Jackie Green of Alteros, and moderator  Karl Winkler of Lectrosonics. The good news: access to more RF bands than initially anticipated, in the form of “alternate” bands, and an array of new products that let users access a much wider range of spectrum, from 500 MHz past 5 GHz. The not-so-good news: buyers of the vacated 600 MHz spectrum have already begun lighting up their new RF real estate, most notably (in the New York metro area) T-Mobile, which had a booth at the show to sign up new consumers. (As evident elsewhere at the show, T-Mobile did make an appreciated effort to alert at least a few networks that it was about to activate new spectrum.) The advice consensus from the panel: scan early and scan often, to avoid interference potential, and move into the new RF bands ASAP.

“People are beginning now to realize that they can’t just stay in the TV bands anymore,” Green told the audience.

The DTV Audio Group met on Oct. 20, and at the top of the agenda was the Oct. 19 announcement of AES’s Audio Guidelines for Over-the-Top Television and Video Streaming (AGOTTVS). The guidelines are focused on managing the loudness and loudness range of program and interstitial content distributed OTT and by online video distributors (OVDs) to maintain and improve the sonic integrity and listening experience across multiple devices.

A network executive noted that these guidelines “put more emphasis on future performance than in the past” and that more testing of loudness issues in the OTT and streaming environments is planned. DTVAG Executive Director Roger Charlesworth pointed out that the AGOTTVS guidelines will put an even greater emphasis on metadata collection and analytics. The overall lesson is that “mobile devices can now show up anywhere anytime,” said one attendee.

The proliferation of sources and distribution modalities, from Netflix over the internet to Hulu through 5G, will mean that loudness will become less predictable than ever. That will only become even more complex as the industry moves into an immersive audio environment, noted a representative of a cable network. As he spoke, Amber Alerts began to squawk over putatively muted smartphones throughout the room, underscoring how managing volume in a multipoint media landscape will be an interesting game of whack-a-mole. “In the future,” said one presenter, “we’ll have to keep in the DSP and AV profiles of each type of device and network when we develop content.”