Selected events are being produced in 8K HDR

OBS and NHK are once again working together to create 8K content at an Olympic Games, but, this year, for the first time ever, HDR is a big part of the production, with the chosen events produced in 8K HDR. 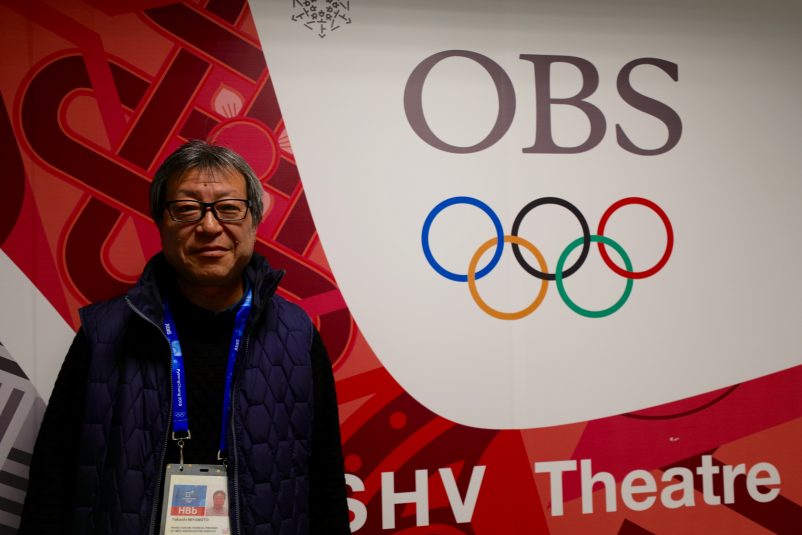 OBS’s Takashi Miyamoto at the 8K Super Hi-Vision Theatre located in the IBC and featuring a 350-in. screen

“In the Rio Games, we had a minimum of four and up to seven cameras for each event,” says Takashi Miyamoto, technical manager, broadcast engineering, OBS. “This time, we have up to 10 cameras, including a 120-fps camera for slow-motion replay. And everything is in HDR. That is a big change.”

There are four NHK trucks in PyeongChang working on the 8K productions, two handling the video production and the other two the 22.2-channel audio mix.

“In Rio,” says Miyamoto, “we placed several unilateral mics in the venues, in addition to receiving the mic splits from OBS. In these Games, we have increased the number of our own mics to further enhance the surround system. The surround mics for 22.2 surround sound are placed at a height that is different from an ordinary production.”

The 8K coverage so far has been highlighted by the Opening Ceremony, figure skating, short-track speed skating, and ski jumping, with snowboard big air still to come. The figure-skating and short-track production has a mixture of Ikegami and Sony cameras as well as a proprietary 8K 120-fps camera from NHK STRL (Science & Technology Research Laboratories) that is used for slow-motion replay.

The production at figure skating and short track, for example, includes Ikegami SHK-810 8K cameras, two Sony HDC-4800 cameras in 4K for high-speed recording (upconverted to 8K), and the NHK STRL camera system. Having a mix of cameras has introduced the same color-matching challenge found on any production.

The production at another venue, ski jumping, is using Sony UHC8300 8K cameras and a Sony server for replay needs. In addition, Sony HDC-4800 cameras are used for slow-motion playback.

One of the challenges was not only to create 8K HDR content but also to make it backwards-compatible so that it could be downconverted to 4K SDR and ultimately delivered to consumers around the world as 4K SDR. The team is using the HLG (hybrid log gamma) HDR standard developed by NHK and the BBC.

“In the OB trucks, the camera shaders are looking at SDR as well as HDR monitors to maintain the quality and keep the compatibility between SDR and HDR,” says Miyamoto. “So, when we convert from HDR to SDR, we carefully select the parameters in consultation with the OB-van engineers and the OBS tech team.”

The 8K HDR content is viewable at the IBC in a Super Hi-Vision 8K Theatre that has a 350-in. Panasonic projection system. Four 4K projectors each deliver one-quarter of the 8K image. In Japan, NHK is delivering the 8K content to five public viewing sites and is also transmitting live via satellite for UHD test broadcasting. In December, it will launch two channels dedicated to 4K and 8K, and delivery of Super Hi-Vision content via satellite is expected to be available to consumers by the end of the