LAPD Connects With The Community Through Live Streaming

The Los Angeles Police Department is one of the largest law enforcement agencies in the U.S., serving over 4 million residents. Live streaming has become a huge component of the department’s communications strategy for emergency response and community relations initiatives. LiveU Solo has become an integral part of the LAPD’s live streaming toolkit, and the unit was purchased by the department through a generous grant by the William H. Parker Los Angeles Police Foundation. 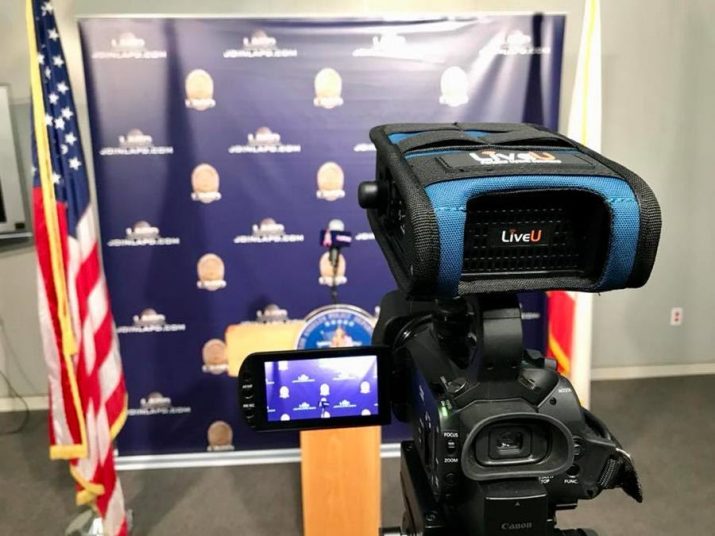 The LAPD had been dabbling in live technology to cover press conferences during emergencies such as brush fires, but found that they couldn’t rely on a cell phone alone to stream the breaking news without losing the feed – especially in rural environments where cell service was scarce.

Sergeant Hector Guzman and his team within the social media unit of the media relations division were tasked with finding an affordable and reliable solution to enable Facebook Live streams from anywhere. The team ran LiveU and two other competitive solutions through their paces and LiveU Solo was selected for its ease of use.

“Customer support was also a key factor in our decision process. From the sales rep who provided a demo unit and guided us through the establishment of the Solo portal to the 24/7 phone support, the level of service and support has been outstanding,” says Guzman.

“What we liked most about the LiveU Solo was that we could train someone within a few minutes and then send them off. It was truly plug-and-play.”

The department’s biggest motivation for implementing a portable live streaming solution was the ability to get people out there and cover events beyond the use of a cell phone. During a mass incident, when the city’s unified command is deployed, there’s a need to put out messages to the public quickly and bandwidth is a crucial component.

“It’s important to get information out to the community and a reliable, high-quality stream makes it possible,” Guzman says.

“Local public safety agencies (police and fire) have relied on our Live U Solo streams when they have been unable to acquire a quality feed via the use of a cell phone only.”

The department has live streamed the World Police and Fire Games, community outreach events, press conferences, and media briefings during critical incidents such as an officer-involved shooting.