Attendance at major-league games has been challenged in recent years, with at least some of the blame laid at the doorstep of sports broadcasting and its range of glossy technology features, such as super-slo-mo and multichannel audio, which have deepened viewer engagement. Both the NFL and MLB in their recent and upcoming seasons have adjusted rules and regulations to speed up play, even as the stadiums look for games and other content, like the Kiss Cam, to put up on the big screens to hold fans’ attention. 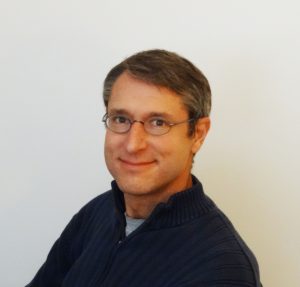 Virtex’s Jeff Green: “You’re playing [games on Virtex Arena] while surrounded by the natural enthusiastic sound of the crowd. That might be more exciting than hearing it on television.”

Virtex, a San Francisco Bay Area startup, thinks it has a better solution. Its Arena app lets fans in the stands look through their devices and see the actual field of play before them, through the devices’ cameras, letting them play animated hit and pitch games in ballparks and toss and catch games on gridirons that Virtex has digitally modeled, including MLB stadiums in New York, Chicago, San Francisco, Boston, and St. Louis. Users can compete against each other in these mini games, and the app adjusts to their spot in the stadium. CEO Jeff Green sat down with SVG to talk about fan engagement through VR.

Broadcast sports now delivers a very high-quality experience, and it’s only getting better. In recent years, sports venues have been trying to get those fans back in the stands. How does Virtex Arena fit into that scenario?

Virtex Arena is a mobile app through which fans can see each stadium they’re at from the point of view of where in the venue they’re seated. They enter their section and row numbers and can see the field from the point of view of that seat. The experience is unique to the stadium they’re in. Then, they can compete on the game against anyone and everyone on the app in the stadium: their friends and everyone else. We give them a 20-second-or-so notice that an [in-app] game is about to start, and the games last a minute or so, so they’re designed to be played on the natural breaks in a game, such as between innings or during the two-minute warning.

Which venues have you modeled so far?

Among them are the [San Francisco] Giants’ AT&T Park, the Cubs’ Wrigley Field, and Yankee Stadium. 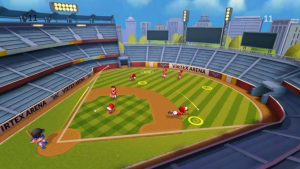 Virtex Arena app allows users to compete with other fans in a particular stadium.

Are the teams or stadiums involved?
The Giants were aware we were doing this. The teams don’t need to be, since it’s like Pokémon, a VR overlay of reality.

What teams and leagues have you spoken with, and what have their reactions been?
We can’t discuss specific teams at this point, but the ones we have spoken with have been interested. The benefits are increased fan engagement at the game, during the slow points in between play. It can help draw fans to the stadium and keep them there longer: for instance, when there’s an especially lopsided score that might otherwise tempt them to leave early. We’ll have multiple virtual events planned to occur during the actual event through the app.

What are the benefits for the teams and leagues?
Arena is a way to bring more sponsorships into the game. The teams don’t have to manage but [do] participate in [them]. It’s also virtual real estate they can make available to their sponsors. The teams can promote the [virtual] games to their fans and can show them on their own video screens.

You deployed a beta version of the game at the Super Bowl, using the actual venues as the sets, so to speak, of the game. Does that present any legal complications?
No. We’re not involving the resources of any team, just using their [in-venue] network, just as Facebook and any other app do. And Arena uses less bandwidth than Facebook.

How integral do you think AR can become with sports? Can it be a bridge between live and broadcast sports?
Absolutely. They’re taking steps to improve the [flow of the] game, but there will always be natural breaks in play, and this is a way they can use those for fan engagement. Stadiums already do that with games and puzzles on the big screens, like having the crowd guess which cup on the screen a ball is under, and the crowds get into it. We see this app as the next level of that. And you’re playing while surrounded by the natural enthusiastic sound of the crowd. That might be more exciting than hearing it on television.