The audio in sports venues has become a more important market for sound-system manufacturers in recent years. It’s certainly more lucrative: as the overall costs of arenas and stadiums spiral upwards, so does the percentage of capital costs allotted for sound and video. However, this burgeoning market does not come without challenges.

Noting that integrators are being asked to make sports venues more adaptable to more types of entertainment, T.J. Smith, president of loudspeaker manufacturer EAW, cites the Oklahoma City Thunder’s Chesapeake Energy Arena. An EAW Anya adaptive-array system, installed there in late 2016, uses software to adjust coverage, digitally reconfiguring the system to deliver immersive game-night programming and then to switch, via presets, to coverage patterns for concerts and other uses of the venue. At the push of a button, venue operators can switch from a basketball setup to a monster-truck–rally configuration. 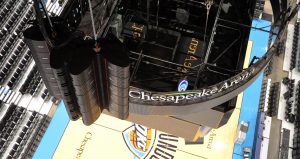 “In the past, they’d have to literally raise and lower the system to reconfigure it,” Smith explains. “They were able to get significant operational cost savings from this.”

Other large-scale trends also are at work in sports venues. Mike Hedden, president/CEO at Danley Sound Labs, whose Jericho systems are deployed in the new Atlanta Falcons’ Mercedes-Benz Stadium and, this coming season, will fill the Georgia Bulldogs’ 93,000-seat Sanford Stadium in Athens, says the growing integration of massive video scoreboards and sound systems reflects a major trend in sports-venue design.

“The new videoboard is 33% larger than the previous board,” says Hedden. “So we are doubling the horsepower in the loudspeakers, subwoofers, and amplifiers. It will be as good as it gets in stadium audio.”

Integration of massive A/V systems is a way to keep both audio and video operationally harmonious in venues, as well as to manage costs, says Hedden, but he’s also concerned that expertise in each category might become compromised when they are dealt with as a single system. “Not every integration company necessarily has complete expertise in each area, and manufacturers usually don’t have as much knowledge in one area as they do in the others. This becomes a bigger issue as the scale of the combined systems increases.”

The Laws of Physics
John Monitto
, director, business development, at Meyer Sound, whose 178-loudspeaker LEO system was installed at Detroit’s Ford Field last year, expresses some concern that, with large-scale integration of sound and video, the relative speeds of sound and light begin to reveal problems. 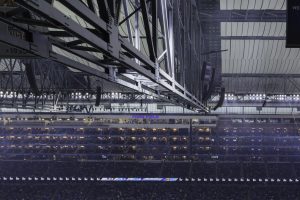 “As screens become bigger and resolution becomes higher,” he explains, “lip-sync is more important and becomes harder to achieve with point-source sound systems,” the type of system designs often found in the largest college football stadiums. Spoken dialog on screens will reach ears disconcertingly behind moving lips on the screens. “The solution,” he says, “is distributed-sound systems.”

Another growing concern is how to extend the dynamic range of sound systems to ensure that they can clearly and intelligibly convey speech over increasingly loud crowd and music noise. Monitto is part of an initiative under way by AVIXA (formerly Infocomm) that’s examining how best to achieve optimal peak-to-average levels for speech in these environments without having front-of-house mixers constantly ride console faders, which can produce uneven level outcomes or overuse compression, often not keeping up with frequent and sudden changes in overall level at sports events.

“Understanding peak-to-average is critical for this,” he says. “You’ll often have sound mixers who may work only a dozen games in a season and get in the habit of using or overusing compression to ride levels, particularly on new digital consoles that have compression built in. That can result in speech getting squashed and harder to understand. We have to develop new standards around this as stadiums continue to get louder.”

Monitto also notes the audio that accompanies the content played on venue video screens, which he says can vary widely in relative volume levels and is subject to few industry standards.

(The issue echoes what broadcast audio faced with widely varying audio levels on the air. That issue led to the CALM Act, signed into law in 2010 and fully implemented five years later, which standardized and regulated sound levels for commercials.)

As a lengthening list of sports venues poised to open or on the drawing board — including the Los Angeles FC’s 22,000-seat Banc of California Stadium this year, the 70,000-seat L.A. Rams’ City of Champions Stadium in 2019, and a 65,000-seat NFL Raiders/UNLV Rebels stadium in Las Vegas in the very near future — sound systems will both increase in power and add the flexibility needed to accommodate a wide array of uses.