The Pangdemonium Theatre Company, which performed at the Singapore Drama Centre Theatre, has rented a Clear-Com FreeSpeak II wireless intercom system to ensure accurate and timely communication during live theatrical performances throughout the entire theatrical complex, from the back of house to the front of house. 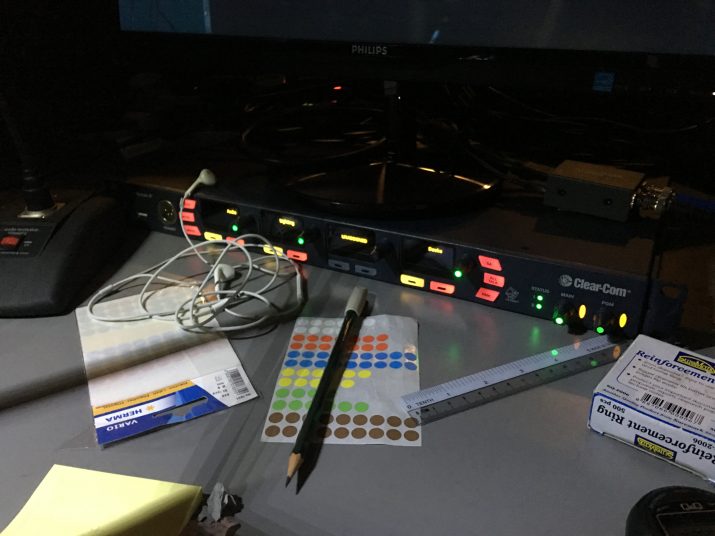 Founded in 2010 by Adrian and Tracie Pang, Pangdemonium’s mission is to tell stories that are challenging, inspiring, relevant, accessible, and above all, of the highest artistic, entertainment and production value. The company also actively nurtures new talent by creating opportunities for aspiring artists and technical practitioners to work in a professional and nurturing environment.

“Communication at the Singapore Drama Centre was seamless,” says Adrian Pang, co-artistic director of Pangdemonium Theatre Company. “The intercom system was crystal clear, even with a full house of people with wireless devices. The Clear-Com’s FreeSpeak II definitely delivered.”

The FreeSpeak II system allowed Pangdemonium to wirelessly and quickly pair its beltpacks to the base station and create isolated groups to keep communications as efficient as possible.

“On our production of Fun Home, we had multiple moving wagons requiring coordination of the stage crew with cues coming from front of house,” says Tracie Pang, co-artistic director of Pangdemonium Theatre Company. “We were able to create ‘groups’ so the stage crew could communicate with each other and solve issues in real time, without interrupting the Stage Manager’s cue-calling flow. It’s excellent that we had coverage in all areas of the theatre, from backstage to dressing rooms to the control booth and spotter’s gallery.”

FreeSpeak II operates in multiple worldwide, license-free frequency bands: 1.897-1.933GHz and 2.4GHz. This wireless intercom system is designed for extensive communication in large-scale operations and has the ability to maintain a strong and continuous wireless connection across an expansive coverage area while providing crystal-clear digital audio.

“The best thing is that the belt packs are easy to use and quick to pair with the base station, and the 18 hours of standby time is great,” says Tracie Pang. “We had crystal clear audio and could connect the FreeSpeak II system to the venue’s existing Clear-Com 2-wire partyline intercom with no issues.”

As the person that relies on the intercom system the most, the stage manager is the ultimate authority on whether a system truly meets the needs of a production.

“The comms on Fun Home were great,” says Cat Andrade, stage manager for Fun Home. “With the Clear-Com system, we never had a problem with sound. You could always hear other people clearly without fiddling with the levels. The packs were streamlined and not at all bulky. It was great that we could put the God mic through the comms too; much easier than having a handheld mic and trying to juggle all those things. Plus, I could call ‘hold’ and ‘stops’ a lot faster. The headsets were also lightweight and comfortable. I would definitely encourage the use of Clear-Com FreeSpeak II system for future shows.”