ESPN’s NBA Draft coverage last night offered up a first as the network produced two simultaneous telecasts: the traditional telecast shown on ESPN from Barclays Center in Brooklyn, and a show emanating from ESPN’s South Street Seaport Studios, The Jump: NBA Draft Special, seen on ESPN2. And for Twitter fans, a special show called On The Clock, featuring analysis and reaction during the first round. 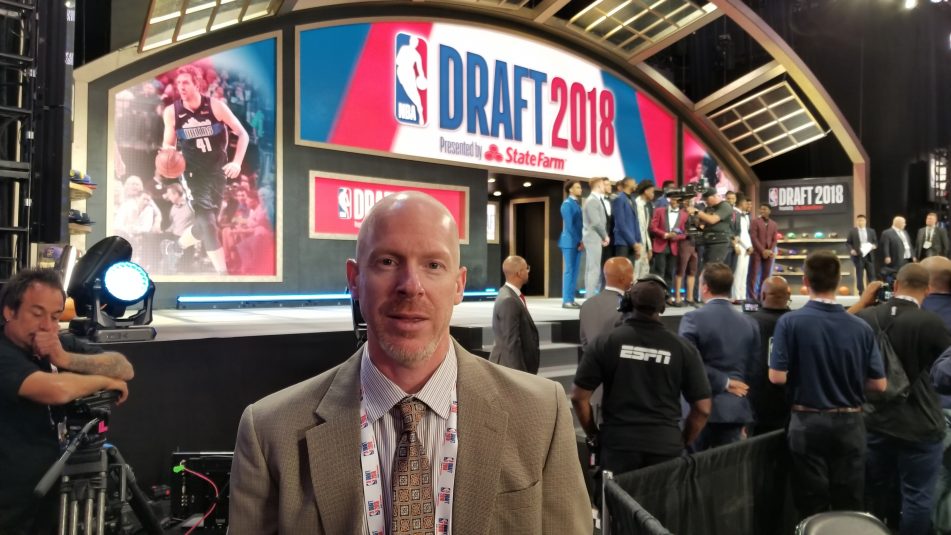 John O’Connor of NBA TV led the network’s efforts at the NBA Draft as it was on site for the second consecutive year.

Patty Mattero, ESPN, operations manager, says that Game Creek Video’s Victory production truck was at the center of the coverage, along with an Avid edit suite where support staff and a producer created content on site. Last year was Mattero’s first working with the NBA on the event, and this year, she says the relationships she has built over the past 12 months are making a difference.

“It’s a great working environment for collaboration on all current and future projects, as well as mutual goals,” she says.

It also marks a second opportunity to oversee operations at the same venue, something Mattero says is always an advantage for planning logistical components and the production set up. But ESPN isn’t sitting back from a creative standpoint.

“We always try for a ‘fresh look’ or new approach to make the show more interesting and engaging,” she says. “[Figuring out] how we can make things better while creating efficiencies is always a good goal to have, whether we start with a clean slate or return to the same venue year after year.”

From a production standpoint, one fresh change is that two stage locations have been consolidated into one, with the main set now incorporating the touchscreen that was on the second stage last year. A second RF handheld and an RF Steadicam systems have been added, as well as several Marshall POVs and a couple of Qball tabletop cameras.

NBA TV was also on hand for the second year in a row, and John O’Connor, VP, executive producer of content for NBA TV, says the team was looking to build on last year with an expanded social team that operated out of the NEP TS2B unit (O’Connor and the main production team were in NEP’s TS2A unit).

“For the NBA Finals, our social team was in Atlanta and that worked great, but this operation is so big and important that we need to have the people on site,” he says. “There are a lot of moving parts, and it is safer this way as everyone knows what is going on. The social team is in their own truck producing their own broadcast with tweets and reaction.”