All six of ESPN’s productions at the MLB All-Star festivities in Washington D.C., including Monday’s Home Run Derby, were run out of NEP’s EN1 mobile units (A, B, C, and D) with three separate production spaces serving the various entities. 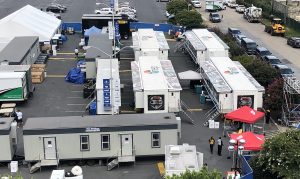 “Certainly the Grass Valley Kayenne K Frame [switcher] allows us to have multiple control rooms and share resources, and that’s what EN1 is really designed for –sharing resources between multiple shows,” says EN1 EIC Bruce Hogenboom. “It’s really easy for one camera to be swung from one show to another in just a moment or two. So, it’s shows like this that really let EN1 shine.”

While ESPN’s show was bigger than ever at All-Star this year in D.C., NEP’s long history with ESPN at All-Star and the Home Run Derby allowed the engineering team to build on the proven model its utilized in years past.

“This is definitely a very big, complex [show], but we’ve gotten used to that and we’ve got a good team in place that is handling all of the interconnection to the building and to Fox and Major League Baseball and everything else,” says Hogenboom.