After a move from Los Angeles to Madison, WI, prior to last year’s event, the CrossFit Games production operation has continued to grow prodigiously. The “Woodstock of Fitness” has grown from a production comprising 35 crew members working out of a single mobile unit just six years ago to one of the largest live productions on the annual sports calendar: more than 10 NEP mobile units, a crew of more than 300, and 50-plus cameras. Add in the fact that the CrossFit competitions change from year to year, and it becomes clear just how challenging the event can be for the production team. 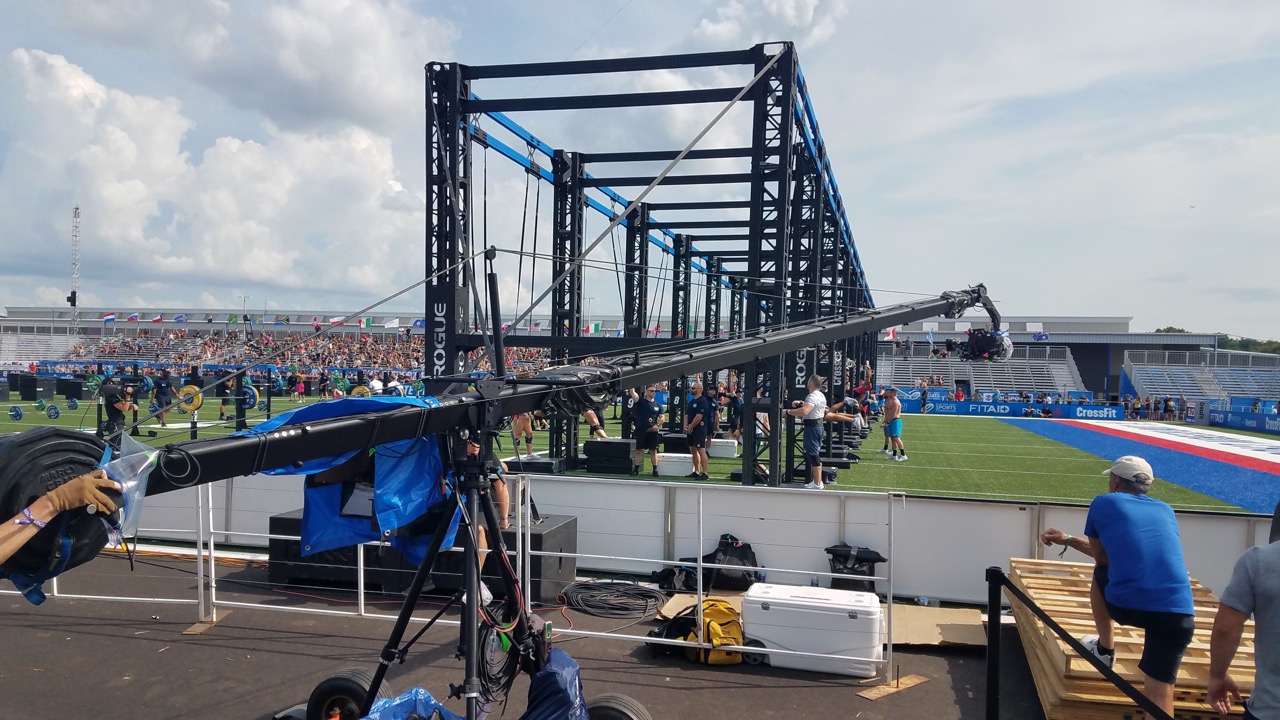 A total of 56 cameras – including two jibs – are on hand to serve this year’s CrossFit Games production in Madison, WI

“Last year was a huge undertaking, and it would be difficult to get much bigger,” says Senior Coordinating Producer Joe Novello. “The complexity comes from the events dreamed up by the director of the CrossFit Games, Dave Castro. Very rarely is the same event repeated. Imagine if, when you showed up at a football game, the goalposts were on the sidelines. Every year, the events evolve; the field of play and the rules may change. But the goal always remains the same: to crown the Fittest on Earth. This year, there are some ingenious competitions that will test not only the athletes but the limits of the facilities and production team as well.”

This year’s CrossFit Games — Aug. 1-5 at the Alliant Energy Center in Madison — are being streamed on Facebook, CBSSports.com, and the CBS Sports App and televised live on CBS (one-hour live look-ins on Saturday and Sunday plus a recap show) with a daily highlights show on CBS Sports Network.

NEP Bigger Than Ever in Madison 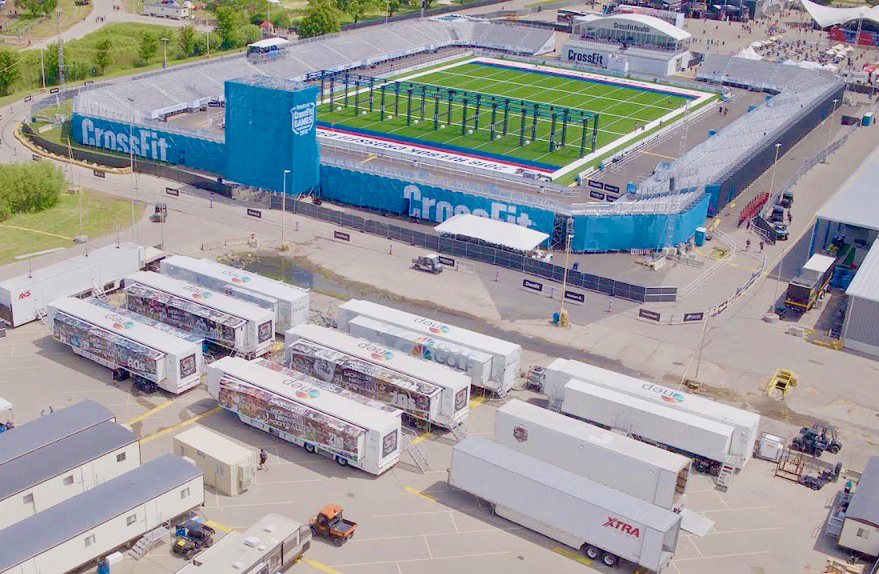 NEP is providing more than 10 total mobile units for the CrossFit Game in Madison, WI

“To run all this simultaneously, a tightly integrated system is essential,” says Novello. “NEP is and has been an integral partner in growing and developing coverage of the Games over the years.”

The move to Madison in 2017 resulted in NEP’s doubling the size of its technological footprint onsite with more trucks, video screens, equipment, and NEP engineering support.

“The biggest challenge is logistics. Our tech team uses Google Docs, [which are] basically living documents [and] constantly updated,” says Peter Kimball, senior account manager, NEP Broadcast Services, US Mobile Units. “Honoring the CrossFit traditions while creatively covering and showing the incredible passion and commitment of the athletes is our biggest goal. Our clients expect and encourage us to enjoy and experience the world of CrossFit. It’s not just a job but a longtime friendship.” 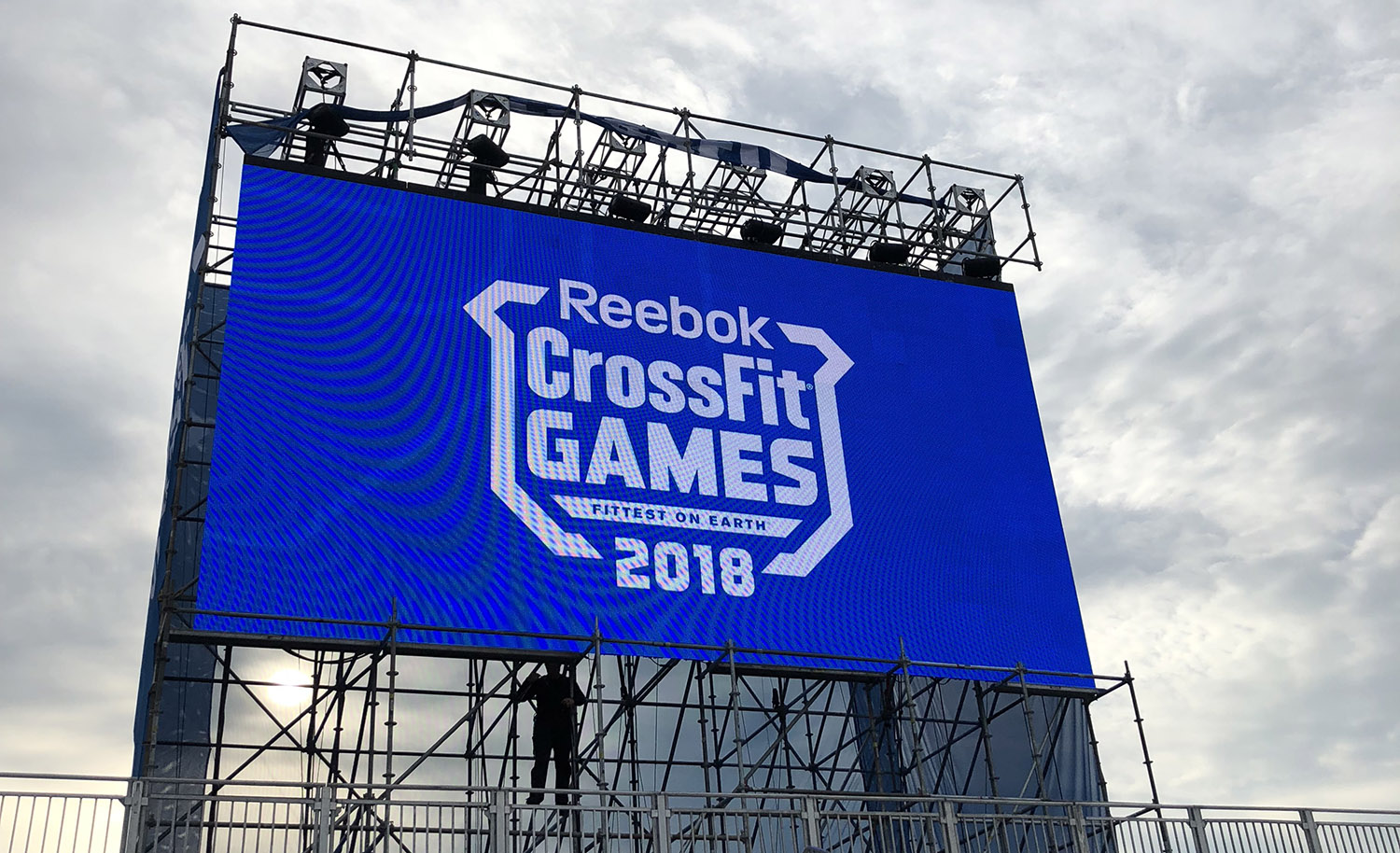 CrossFit works with NEP’s Faber Audiovisuals to manage the video-board production at Alliant Energy Center. SMT, which is CrossFit’s scoring partner, also provides a wealth of presentation options for the boards as well.

In addition to NEP, CrossFit has its own live-streaming team onsite and handles in-house production for the videoboards at Alliant Energy Center. SMT, which is CrossFit’s scoring partner, provides a wealth of presentation options for the boards as well.

CrossFit has used TVU Networks bonded-cellular and IP systems for several years for point-to-point transmission. This year, CBS Digital also used a TVU system to take in streams from the CrossFit Regionals earlier this summer. That success led to a similar partnership for the Games, with CBS Digital receiving all the live competitions on two streams via TVU receivers.

As CrossFit Games’ Footprint Grows, So Does the Live Production

The Games themselves have expanded and become more complex. The production team is tasked with covering multiple venues throughout Alliant Energy Center, primarily The Coliseum and North Park Stadium. This year, the stadium has been expanded to 10,000 people (nearly 50% more than for the 2017 edition) and has added a new videoboard. 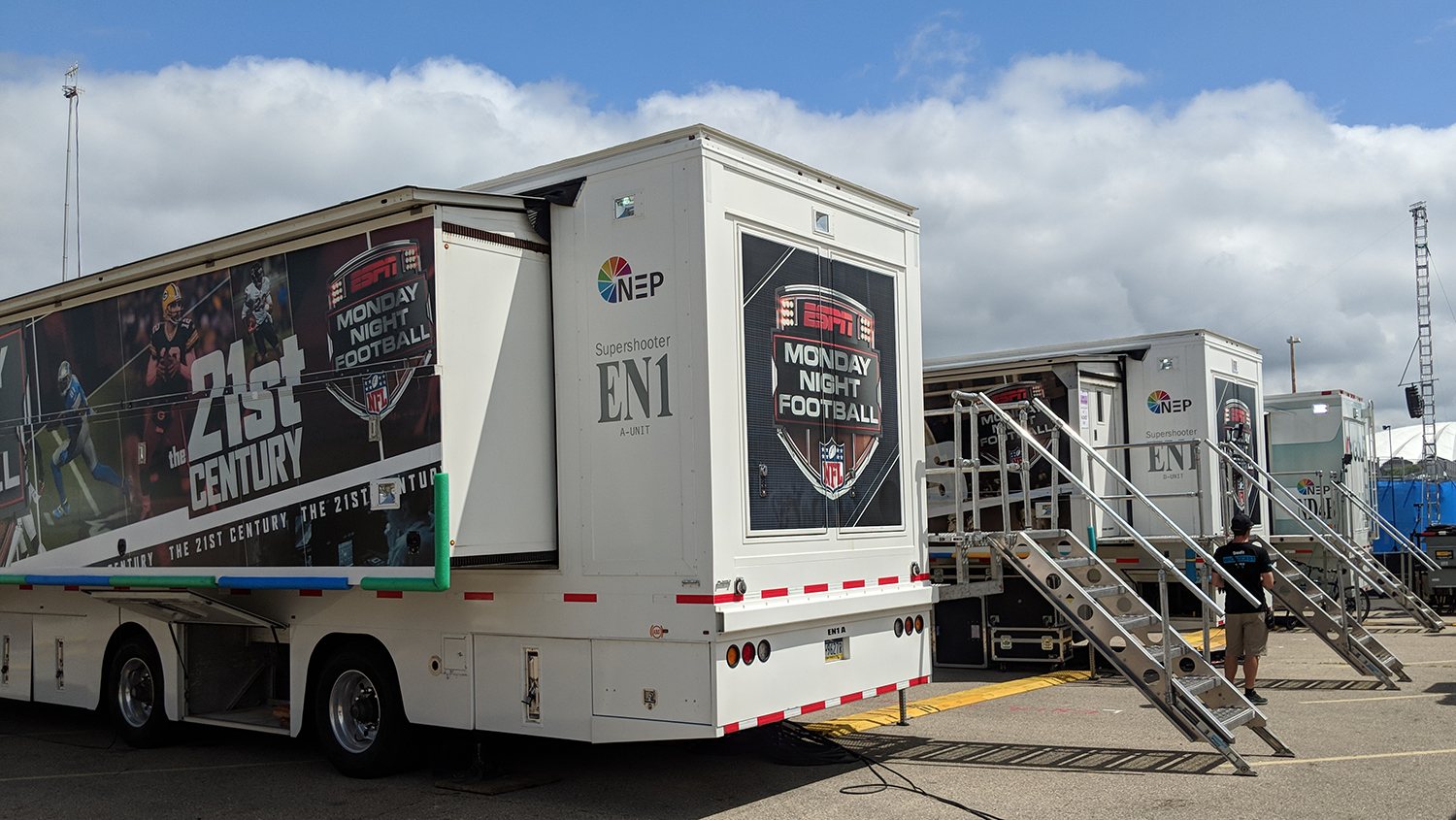 “Ultimately, the CrossFit Games are a test of fitness. To do this effectively, it’s necessary that the events and schedules change — sometimes year-to-year, sometimes they evolve right up to 3,2,1, Go,” says Novello. “So we’ve built a system that is highly flexible, able to adapt to change rapidly. Distribution of updated information can be one of the biggest challenges.”

Novello and company are covering not just the Coliseum and North Park Stadium, however, since many events take place outside the venues and can extend beyond the Alliant Energy Center. To cover this complex of competitions, the technical team has laid out more than 200 miles of single-mode fiber throughout the area. 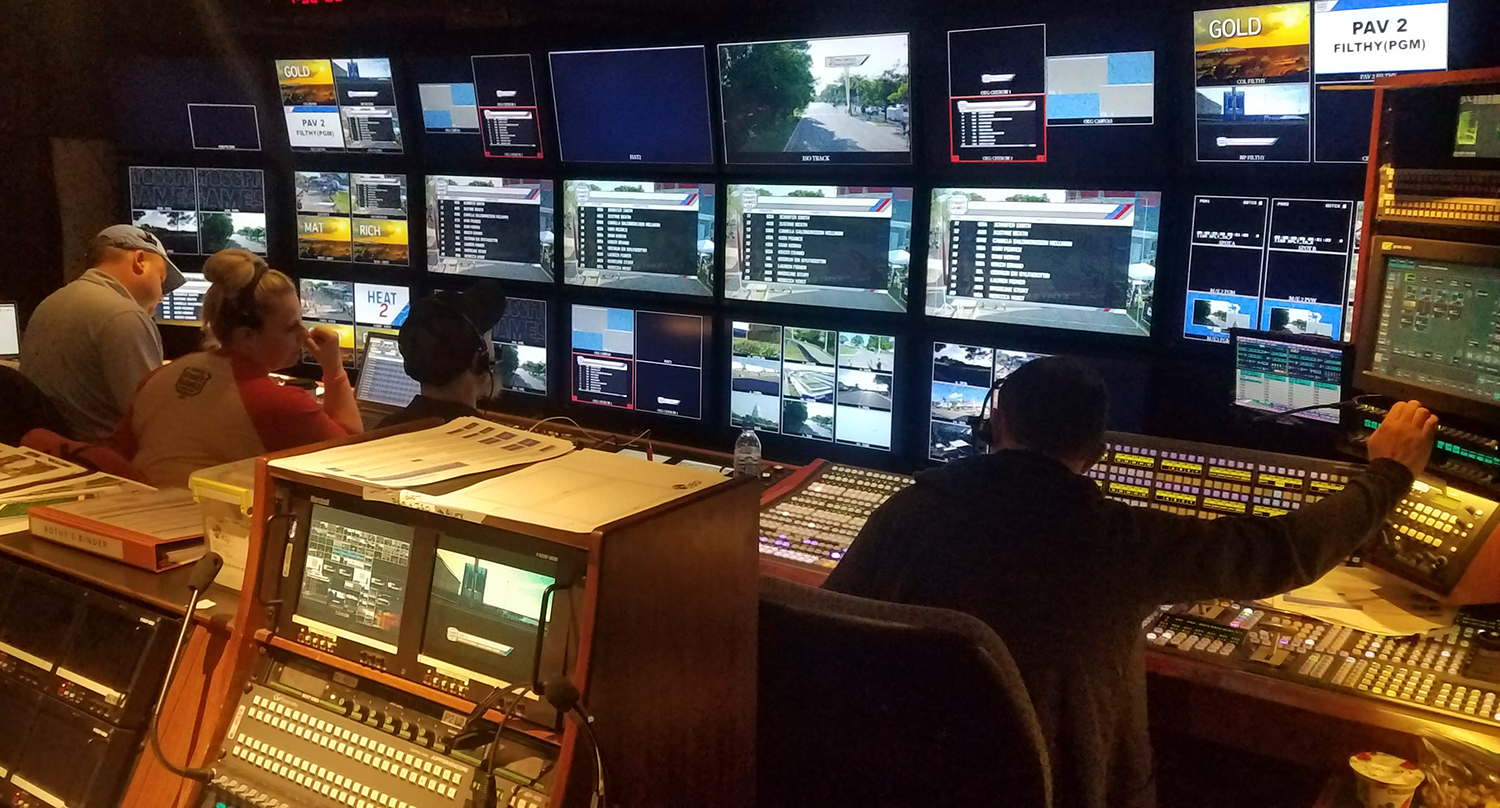 The CrossFit Games production is housed in NEP’s EN1 and ND3 mobile units.

To manage the cavalcade of operational changes that the team must deal with — often right up to the start of competition — Senior Technical Manager Eddie Sheridan has created a digital technical book distributed to more than 30 tablets carried by tech managers and project leads.

“Eddie Sheridan has done an incredible job,” says Novello. “His tech book is a masterpiece of planning. Without that level of detail, the setup would be impossible. And Eddie has created a new model perfectly suited to our ever changing needs. He has created a tech book that is a living document. Any changes that are made — and there are plenty — get entered into the doc and all others get the updates immediately. It’s an elegant solution to keeping up with the challenges of the CrossFit Games.” 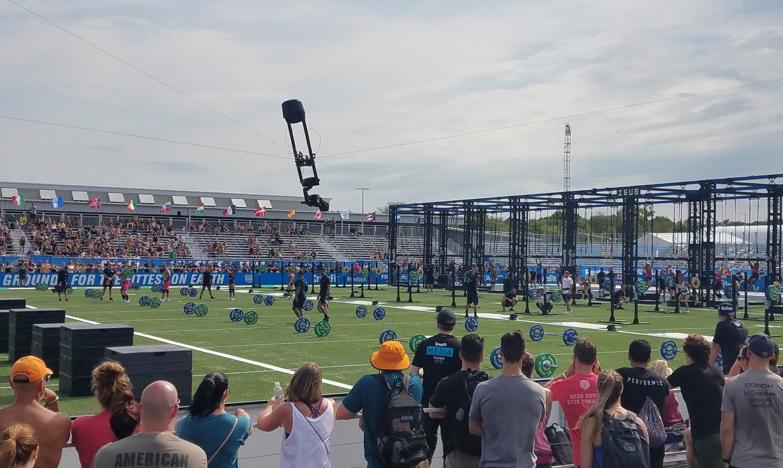 A SpiderCam aerial camera system is being deployed for coverage at the CrossFit Games.

On the audio side, the CrossFit Games show is deploying 24 stick mics and headsets and 56 shotgun mics. Six Calrec audio consoles are networked to both Hydra2 and Dante networks.

“The challenge,” says Novello, “is to manage venue-to-venue and campus-wide distribution to more than four live venues and eight transmission paths. There are 70 different distribution channels in the system to ensure that any channel can be delivered throughout the system. Managing a smooth integration of broadcast with the in-venue music and entertainment experience is ultimate goal.”