ESPN’s Monday Night Football Gets a New Angle on Analysis: From 10 Ft. Up

The ‘Booger Mobile’ offers a refreshed look on the classic broadcast

It’s all about new perspectives for ESPN’s 2018 Monday Night Football season. A new broadcast crew comprising play-by-play announcer Joe Tessitore and two analysts, Jason Witten and Booger McFarland, will join seven-year MNF veteran sideline reporter Lisa Salters and offer new takes on the action. And McFarland’s perspective might be the freshest in all of the NFL: he will spend games on the “Booger Mobile,” an analyst position located about 10 ft. above the field on a camera sideline cart.

That out-of-the-box (and booth) thinking made its debut last week for Thursday night’s preseason matchup between the New York Jets and Washington Redskins. Tessitore and Witten were located in a new broadcast booth, McFarland was 10 ft. up on the cart, and Salters was on the sidelines. 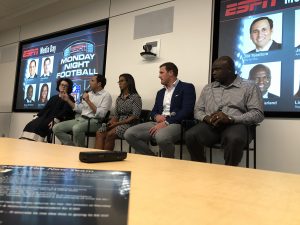 McFarland’s vantage point provides another layer to ESPN’s broadcast by allowing him to see the action from a unique angle for an analyst. In addition, the cart can travel from end zone to end zone and follow the progression of every series, positioning him next to the line of scrimmage.

“This dynamic of having the field-level, hovering analyst is already showing us new dynamics that I think we’re going to be really pleased with,” says Tessitore.

The technology involved is simple yet complex, given that it will be zipping up and down the sideline. A monitor on the platform is divided into a quad split, allowing McFarland to see the televised broadcast; feeds of individual cameras, such as SkyCam; stats and team lineups; and a feed of Tessitore and Witten in the booth (they can also see him via monitor).

“During our rehearsals [in Bristol, Dallas, and New York],” says Jay Rothman, VP, production/MNF producer, ESPN, “we actually put Booger in a separate room with cameras shooting him and cameras shooting Joe and Witten, feeding them to each other and [allowing them to see] each other at all times. To avoid clunkiness and to keep the dialogue smooth, Booger controls the opening and closing of his own mic.”

McFarland believes that the new rig will create a new form of storytelling around an NFL game and enhance the broadcast as a whole: “If I’m at home watching a basketball game or soccer game, it’s more entertaining and more attractive when you have a conversation going on. That’s ultimately the atmosphere that we’re going to try and create.” 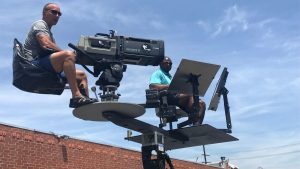 The Booger Mobile, currently a 10-ft. platform mounted on the same sideline cart as the game camera, is tried out by producer Jay Rothman (left) and analyst Booger McFarland. Photo: Los Angeles Times

As the season rolls along, the cart will have to adjust and adapt to the different environments in individual stadiums. On Thursday night, McFarland was mounted on the same cart as the cart camera covering the game, but the team will also experiment with his having his own cart.

“I was confident that [our setup] would pass the test with the NFL, and it did [in our debut],” Rothman reports. “We also have the ability in those stadiums where there are low game cameras to simply put Booger on the far side of the field.”

NEP’s EN1 production fleet will once again be at the center of ESPN’s production efforts, providing a home for Rothman and the rest of the production team to deliver for NFL fans.

Before the team begins the regular-season schedule in Oakland on Sept. 10, the team ponders the path that lies ahead.