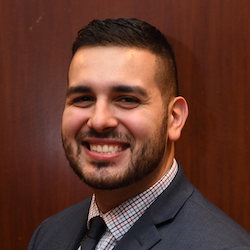 Kristian Hernández is currently the Senior Editor of Sports Video Group. In his role, he is responsible for covering team-based and in-venue productions and various other sports technology topics within the industry. In addition, he is the program director for the annual SVG Venue Summit and SVG Teams Summit. Before joining SVG, Hernández served as co-founder of CHC-TV, the first student-run television studio at Chestnut Hill College in Philadelphia, PA. While at CHC, Hernández produced a daily sports show named “On the Hill with Hernández” — covering all men’s and women’s athletics for the college. Also, Hernández spearheaded the college's newspaper, "The Griffin", as its Sports Editor. Hernández graduated with a BA in Communications. Born in Brooklyn, NY, he currently lives in Queens, NY.

SVG’s Remote Production Forum headed out west to dive deep into the increased role of at-home production models within the last two years. At the Luxe Sunset Boulevard Hotel in Los Angeles, the one-day event on September 21 saw executives from all facets of the industry come together to share ideas about how remote workflows […]  More

In the home stretch of the 2022 MLB regular season, the Toronto Blue Jays are one of three Wild Card teams in the American League. With half of their remaining 12 games to be played at Rogers Centre, the club expects an extra boost of adrenaline not only from the home crowd but also from […]  More

SEC on CBS, in its penultimate season, will wow at-home viewers once more with a pair of innovations. Beginning with tomorrow’s Penn State vs. Auburn matchup in Jordan-Hare Stadium at 3:30 p.m. ET, the coverage will deploy C360’s new wired Pylon Cams with pan-tilt-zoom control in 4K, and augmented-reality (AR) virtual graphics.  More

The Las Vegas Aces are one win away from clinching the franchise’s first WNBA title. Facing off against the Connecticut Sun, also vying for their first championship, Sin City could clinch a three-game sweep in Connecticut tonight at 9 p.m. ET on ESPN. From start to finish, the network has been with the league to […]  More

CBS Sports will once again showcase the NFL’s best in seven games this Sunday. With top AFC teams on its stacked schedule, the broadcaster will further enhance on-air technologies while also deploying new ones, improving the critically acclaimed RomoVision and introducing wired Pylon Cams from C360.  More

Broadcast Management Group (BMG) is continuing to expand its efforts in the sports-video–production industry by bringing in fresh new faces. One of its newest additions is Executive Producer, Sports Production, Graham Taylor. The Emmy Award-winning sports and events producer has spent much of the past two decades covering the National Hockey League and Major League […]  More

The lights of Broadway don’t shine any brighter than those at USTA Billie Jean King National Tennis Center during the US Open. For fans attending the two-week spectacle in Flushing, NY, the United States Tennis Association is at the controls of a thrilling in-venue experience with the support of top-of-the-line technology and key partners.  More

As the calendar flips to fall, Fox Sports kicks into high gear with a full slate of college-football broadcasts. Beginning with the broadcast of Nebraska vs. Northwestern in the Aer Lingus College Football Classic at Dublin’s Aviva Stadium on Aug. 27 and the start of the Big Noon Saturday schedule with tonight’s Penn State–Purdue matchup […]  More

After three long years, the Little League Baseball World Series has returned to its traditional format of international teams in Volunteer Stadium and domestic squads in Howard J. Lamade Stadium in Williamsport, PA. For coverage of the tourney, ESPN has implemented some notable changes in production strategy: a return to the 1080p format, a realigned […]  More

Lucas Oil Stadium, the 14-year-old home of the Indianapolis Colts and host to many professional and collegiate sports championships, will boast a different look for the upcoming 2022-23 NFL season. After an offseason of renovations, the venue has an entirely new LED interface with new main videoboards, ribbon boards, ticker boards within the club level, […]  More