NFL Network will serve as exclusive broadcaster for this Sunday’s Philadelphia Eagles–Jacksonville Jaguars matchup from London’s Wembley Stadium, and the network is pulling out all the stops, including shifting marquee NFL GameDay Morning on-air personalities Rich Eisen, Michael Irvin, Steve Mariucci, and Kurt Warner from the studio to the booth for the first time to call the game.

Leading up to the Sunday broadcast, NFL Network is producing its Good Morning Football studio show at Westminster Live Studios in London all week. In addition, the NFL GameDay Kickoff pregame show will be live from Wembley prior to Sunday’s game. Both Good Morning Football and NFL GameDay Kickoff are at-home productions based in a control room at NFL Films’ Mount Laurel, NJ, production facility, a model that has become standard for NFL Media at big events like the Super Bowl and NFL Draft. 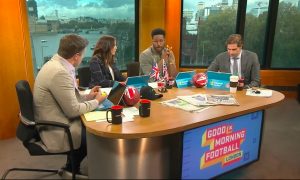 “Whether it’s shows at the London Game, the Super Bowl, or the Draft, we have a very strong comfort level by now with [the at-home model] — both the production team and the operations team,” says Dave Shaw, VP, production, NFL Media. “We did that heavy lift over a year ago when we set the style up and hired full-time operations and engineering teams at NFL Films, and it’s been a great fit ever since.”

The London locale isn’t the only big migration scheduled for Good Morning Football, which will move into a studio at SNY’s 4 World Trade Center production facility next month.

Just over a year ago, NFL Network moved Good Morning Football from its stage at the CBS Broadcast Center into a brand-new studio at the NFL Experience in Times Square. NFL Media opted to run the studio out of a control room at NFL Films headquarters in Mount Laurel.

“We were looking to grow our operation at NFL Films so we could make it not only a production facility for [Good Morning Football] but also have it [serve] as a good disaster-recovery [facility] for us if something were ever to happen in L.A.,” says Shaw. “We also wanted to expand our programming at NFL Films, so we did a big upgrade. It can have multiple sets, and we constructed it [to] handle more if we decide to go in that direction. We also hired full-time staff in NFL Films that are doing a great job.”

However, with the NFL Experience (which was operated by Cirque de Soleil) closing its doors at the end of this month, NFL Media was once again in search of a new home

“We knew we wanted to keep the show in New York, so we did our due diligence and went around looking at all the stages and studios available,” says Shaw. “We had all sorts of potential concepts, ideas, where we might do this show, and the SNY studio ended up being the best option.” 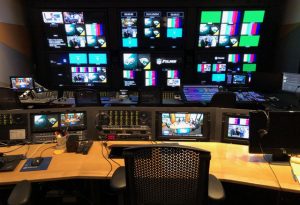 The SNY production facility, which opened about 18 months ago, has been connected to NFL Films’ existing Good Morning Football control room at Mount Laurel. Since the show airs in the morning and SNY’s shows don’t begin production until the afternoon, there will be no overlap in scheduling for the NYC studio.

“It’s a beautiful facility,” says Shaw. “[SNY VP, Operations,] Bill Clarke and [VP, Engineering,] Alex Blanding have done a really great job. Kudos to the team at SNY for reacting in such a short time and working with [NFL Media VP, Engineering,] Bruce Goldfeder and our engineering team.”

With the plans for Good Morning Football to head to London for a full week of shows leading up to Sunday’s Eagles-Jags game, the stars aligned for a simultaneous relocation of the studio. After this week’s London shows, Good Morning Football will head to a studio at Mount Laurel next week before officially launching at SNY on Monday, Nov. 5.

“We knew we were going [to produce the show from London] leading up to our London game and a week-long promotional [effort],” says Shaw. “So we saw that as a really great opportunity for us to dismantle the Times Square [studio] and set it up in SNY while they’re in London.”

Since Fox Sports is overseeing primary production operations for the game itself, NFL Media is focusing on the NFL GameDay Kickoff pregame show, which will also be an at-home production based in NFL Films’ Mount Laurel facility. Halftime and postgame coverage will originate from NFL Films’ studio in Mount Laurel.

“Because we have [connectivity from] London set up all week with Good Morning Football going into NFL Films,” says Shaw, “we just decided to send our pregame production team to Mount Laurel, where they’re going to be producing the pregame show. In terms of the game itself, as always, we’ll be working closely together with Brad Cheney and Mike Davies [and their operations] team at Fox, who are handling the game production. It’s been a really great relationship.” 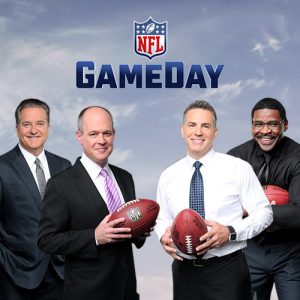 Marquee NFL GameDay Morning on-air personalities (from left) Rich Eisen, Steve Mariucci, Kurt Warner, and Michael Irvin will shift from the studio to the booth for the first time to call this Sunday’s Eagles-Jags game in London.

Although Fox won’t be producing the game for its own air, there will be no reduced production complement at Wembley: Fox will roll out a top-level show for NFL Network’s exclusive broadcast.

“We have SkyCam; we have a very standard network complement of cameras and hardware and the usual graphic complements,” says NFL Network /Fox Sports game producer Mark Teitelman, who has worked with Eisen and company on NFL Network’s NFL Combine coverage. “If you were just watching visually, you would hopefully see the kind of production you’re used to seeing on Sundays.”

The Booth: NFL Network Is Confident There’s Room for All
The four-man booth for Sunday’s game marks the first time Eisen, Mariucci, and Irvin have called an NFL game (Warner has called a pair of NFL games on NBC and serves as Westwood One’s radio color analyst on Monday Night Football and the Super Bowl). Following rehearsals during the preseason and the Rams-Vikings Thursday Night Football game on Sept. 27, NFL Network is confident that the four-man booth will be successful this weekend.

“I keep referring to the cadence and the dance in the booth as we were going through the rehearsal process. Rich [Eisen] said, ‘Wow, it was better than I thought it would be, earlier than I thought it would be,’” says Mike Muriano, VP/executive producer, studio and remote content, NFL Network. “I think that speaks to the chemistry between not only the four guys in the booth but also with Mark [Teitelman].”

Joining the broadcast team are Melissa Stark, making her first appearance as a sideline reporter since 2002 as a member of ABC’s Monday Night Football broadcast team, and Peter Schrager, who will provide news from the sidelines.

SVG Director of Digital Brandon Costa contributed to this report.