Behind the Scenes at the EA Broadcast Center: Inside the New Esports Home of Madden NFL, FIFA, and More

When Electronic Arts opened the EA Broadcast Studio at its headquarters in Redwood City, CA, the videogame publisher’s growing esports operation got a dedicated in-house production studio. The facility, which debuted with the Madden NFL 19 Challenge in mid March, will serve as the year-round home to esports competitions for EA titles like Madden NFL 19 and FIFA 19, which have previously been held at third-party venues. 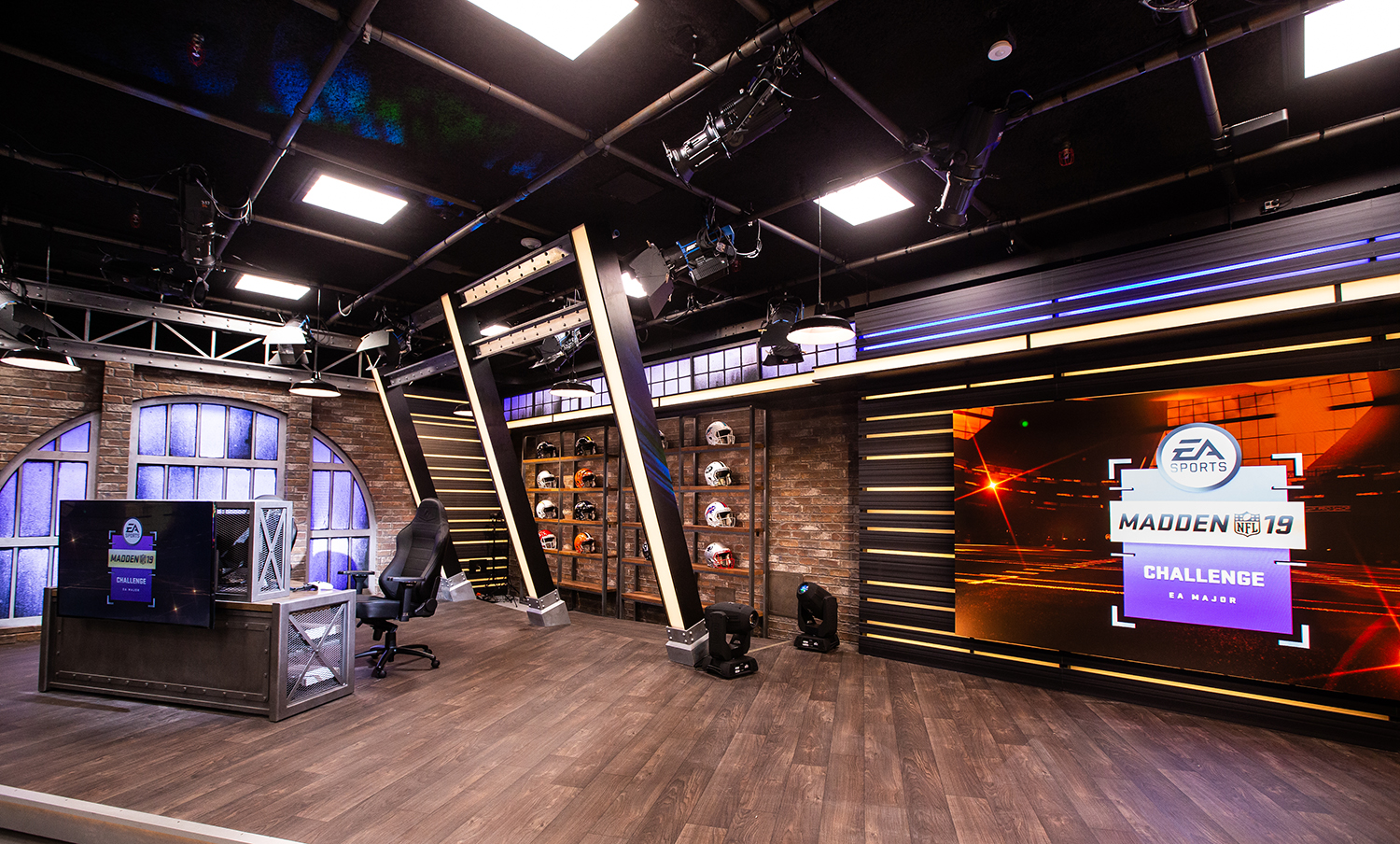 Inside the new EA Broadcast Center, which launched during the Madden NFL 19 Challenge earlier this month.

“EA is invested for the long haul in competitive gaming, so we were able to make the decision to [build an in-house studio] based on the span of several years as opposed to just one season,” says Joseph Lynch, head of broadcast, EA Sports. “We decided it would be a smarter investment financially to build our own place and not have to reinvent the wheel every time we went on the road. But, more important, we can actually focus on the storytelling now and how to make every single show better, rather than being consumed with logistics every time we go out on the road.” 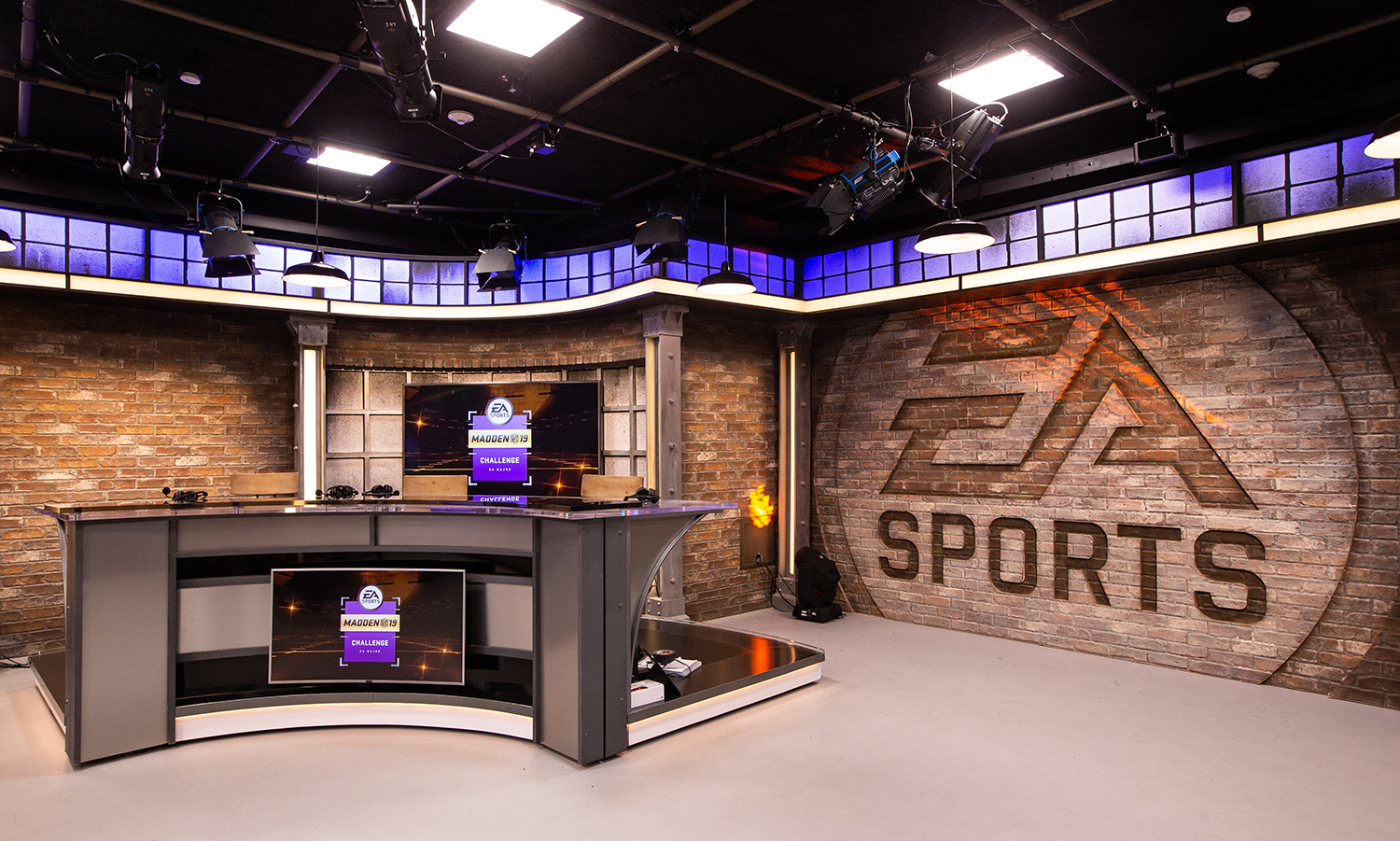 “We were able to get this done on a really short timeline, which is a testament to how passionate our crews, contractors, production-management team, vendors, and integrator are,” says Lynch. “We worked with ASG because we knew they were a smaller sort of boutique shop and we really liked that personal relationship.  We knew that we had somebody that we could grow and build a relationship with over time. They worked hard to deliver in a short time and put together a beautiful [facility].” 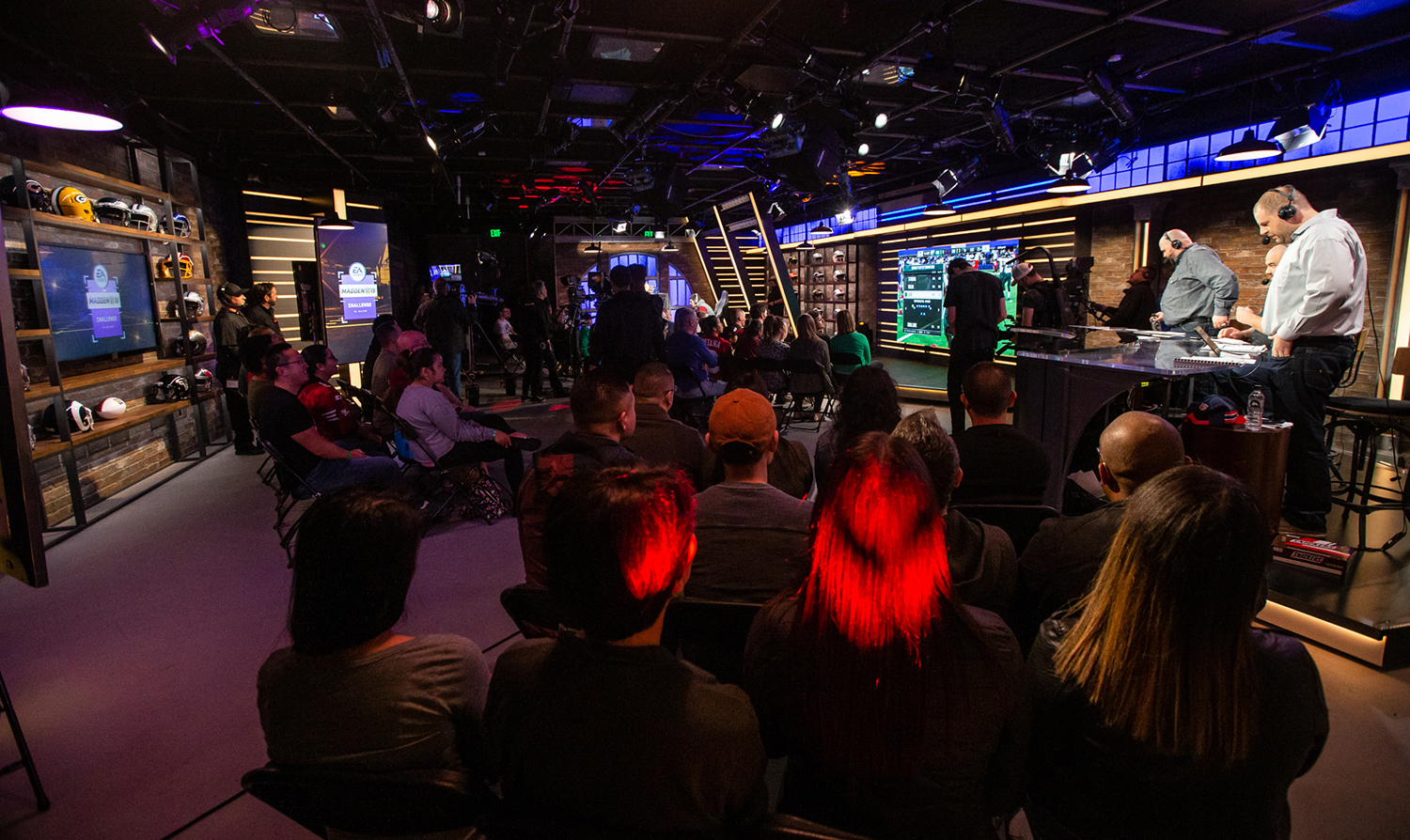 At the heart of Studio 209 is a massive 133-in., 1.5-mm Samsung LED wall that can display customized elements to match the EA game being featured.

“We don’t have a ton of footage, so we designed it in a 360 environment in order to be able to shoot in any direction,” says Lynch. “We may be doing Madden one day and then, at the end of the day, do something else for FIFA or any other title. All we have to do is change out the look and graphics on the monitors and the lighting pattern, and we’ve moved to a brand-new game with a totally different look and feel. It gives us a lot of versatility.” 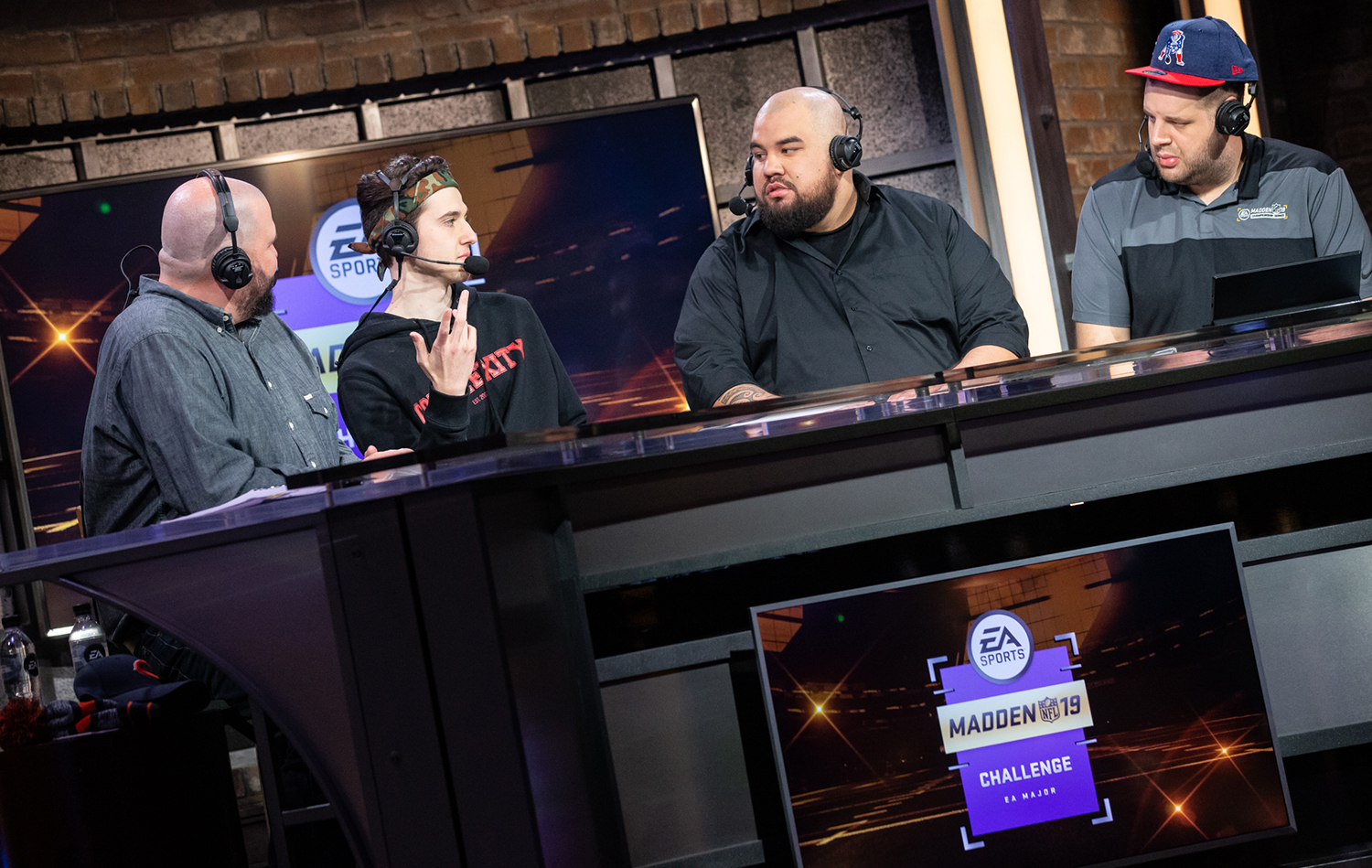 The caster desk features built-in gameplay monitors, allowing analysts to look through a clear desktop to watch the in-game playout. During the Madden NFL 19 Challenge, host/play-by-play caller Scott Cole had one gameplay monitor, and analyst/game designer RG had two monitors: one to monitor gameplay and a multiviewer to watch individual players’ screens as they pick plays.

“As the players are going through their playbooks and picking their plays, RG gets a sense of what they’re doing, which helps him tell the story better,” says Lynch. “it’s a great tool that gives him more information to educate the audience.”

RG also has a FingerWorks ReVu touchscreen system at his disposal to analyze Madden gameplay. The telestration system can be accessed via a 65-in. touchscreen on the south wall of the studio, as well as via a Microsoft Surface 4 tablet at the desk

Players’ Lounge: Hangout for Players, Aspirational Space for Fans
Designed to mimic a New York City loft, the Players’ Lounge is outfitted with four Panasonic AW-UE150KPJ PTZ robotic cameras and three Shure MXA910B ceiling-array microphones to capture exchanges among players. Only players (no non-competing friends or family) are allowed in the Players’ Lounge, which features monitors to allow them to watch their fellow competitors in action. 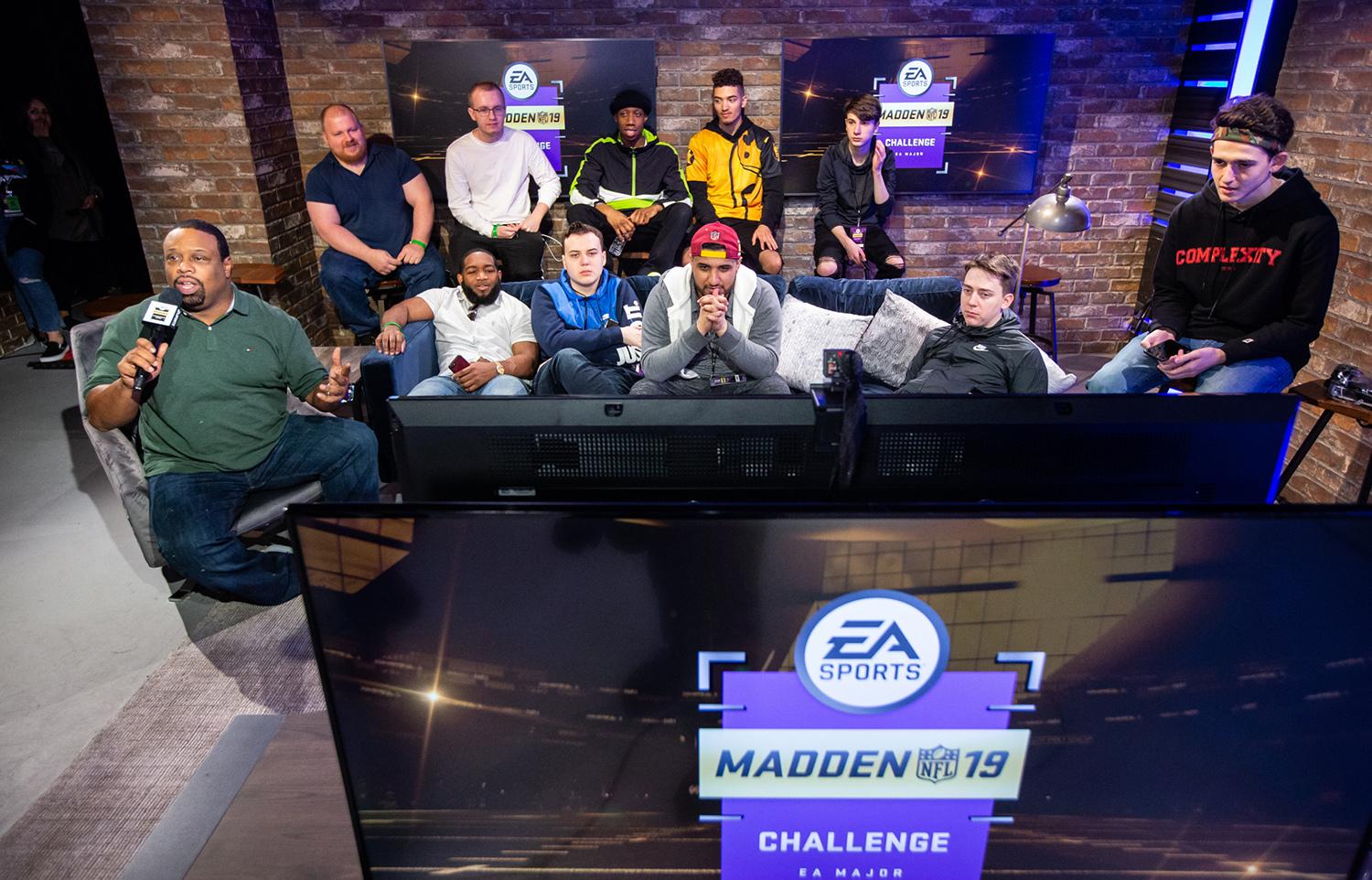 The EA Players’ Lounge features monitors to allow them to watch their fellow competitors in action.

“We didn’t want the Players’ Lounge to be a traditional studio setup. We wanted it to be more of an informal hangout area for players to spend time off of gameplay,” says Lynch. “We talk a lot here at EA about making stars of all our players, but most of the screen time they get is when they’re just sitting there playing. That is great because you learn how amazing they are and see their emotions during gameplay, but we were lacking the real-life moments that show who these players really are. So we designed the room as a place for them to strategize, talk trash, and socialize with the other players just like they would hang out with their friends.” 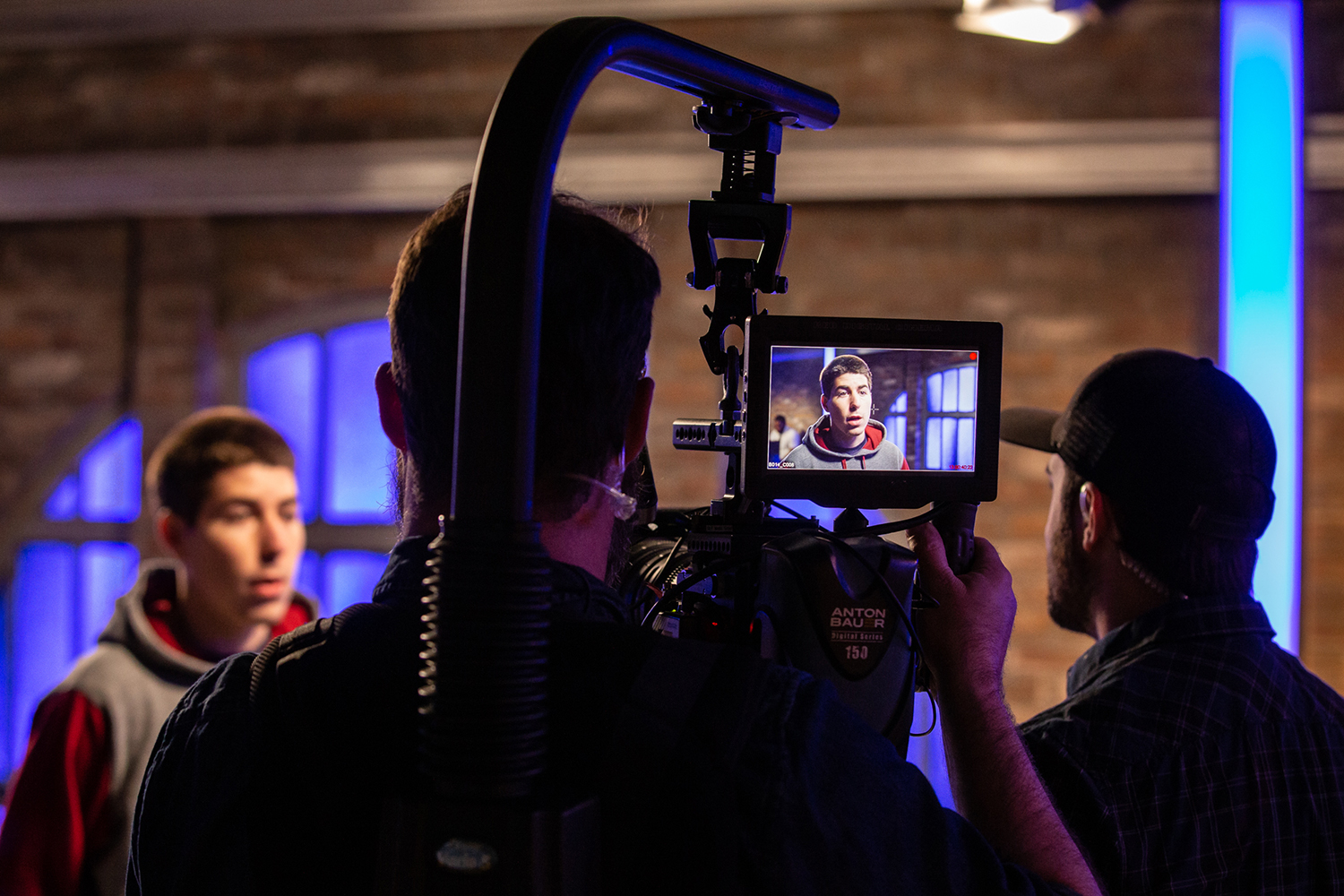 Camera feeds from the Players’ Lounge can be integrated live into the show or played back via EVS depending on the situation. A dedicated producer in the control room monitors the Players’ Lounge at all times and is in constant communication with EA’s EVS replay operator.

The Players’ Lounge concept debuted during the Madden NFL 19 Club Championship in February (for which EA built a temporary studio in Redwood City) and received positive reviews from fans onsite and watching online.

“The whole concept is to be as out of the way and fly-on-the-wall as possible so we can get the real conversations out of players,” says Lynch. “We’re also trying to create this aspirational space that makes viewers at home want to come and hang out and meet all of their favorite players. I think we’ve done that; I’m really happy with the way that worked out.” 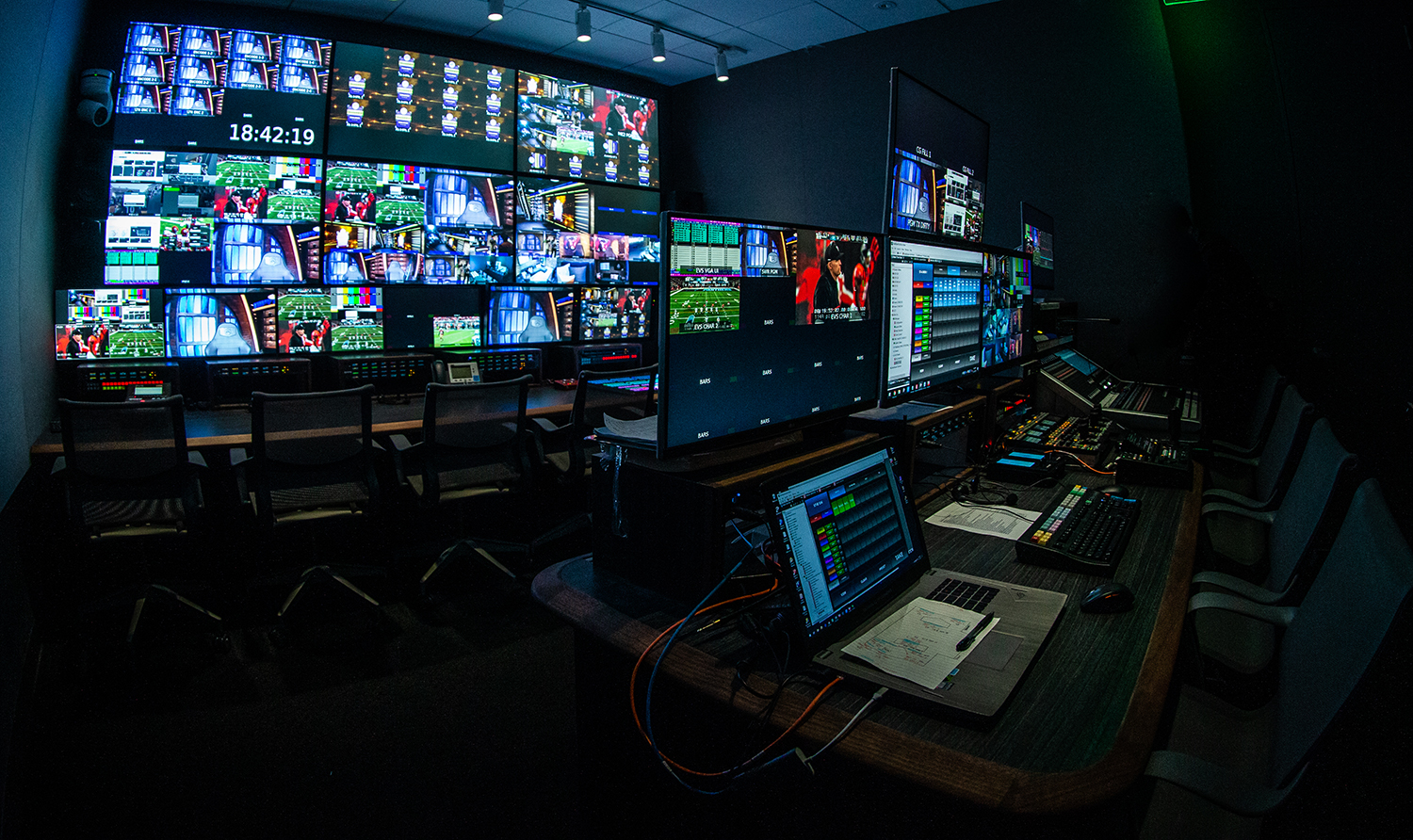 The audio room is built around a Calrec Brio 36-dual-fader console (128×128) and is heavy on Dante IP connectivity. For comms, EA relies on a Riedel Artist 128 matrix mainframe and Clear-Com FreeSpeak II 1.9 GHz four-channel wireless base station (with 10 beltpacks).

The control room is located one floor below the primary data center for EA’s Redwood City campus. With that in mind, Smetham worked closely with the company’s IT department to allocate rack space in the existing data center rather than having to build a machine room for the control room. 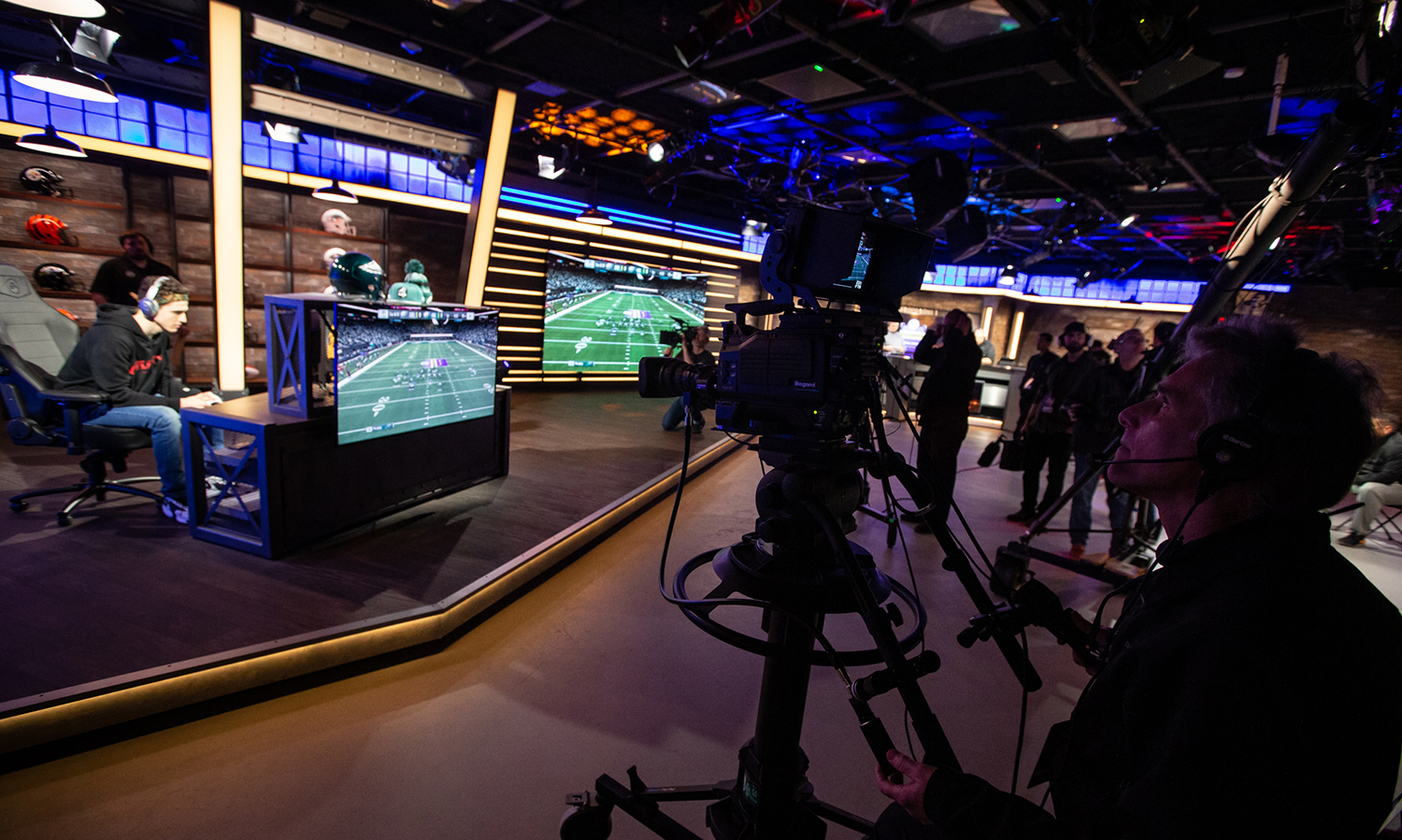 “We were able to put all of the infrastructure and servers in our existing data center on the floor above. So, from an expansion standpoint, we can add almost anything we want in the future,” says Lynch. “Some of the shows we do are a lot more complicated than others, so we may need to scale up or down. We’ll bring in more equipment for some of the larger Madden shows, but some of the weekly content doesn’t require all that. We have the ability to accordion out the operation when we need to.”

EA is also preparing for a potential 4K future: the 1080p control room can be easily upgraded to 4K.

“We didn’t specifically go 4K on everything from day one, but all of the equipment is 4K-ready,” notes Lynch. “We just wanted to futureproof ourselves. Now we can upgrade everything to 4K when we deem the time is right.”

Construction and integration for the EA Broadcast Center was completed in just three months (Dec. 10 to March 10).

With that in mind, the company added 500 TB of Quantum QXS active storage and 1 PB of StorNext AEL6 offline tape storage to serve its growing content-creation operation.

“The amount of content that we’re creating in competitive gaming is a new universe in terms of volume compared with what we’ve been doing up until this point,” says Lynch. “So we built out [the infrastructure] here to serve not only the live-competition needs but all our content-creation needs year-round.”

Next-Gen Tech: AR, Eye-Tracking
EA has erected an AR seamless green screen at the broadcast center and plans to create a cavalcade of “fun and unique content” both during gameplay and for shoulder programming, according to Lynch. 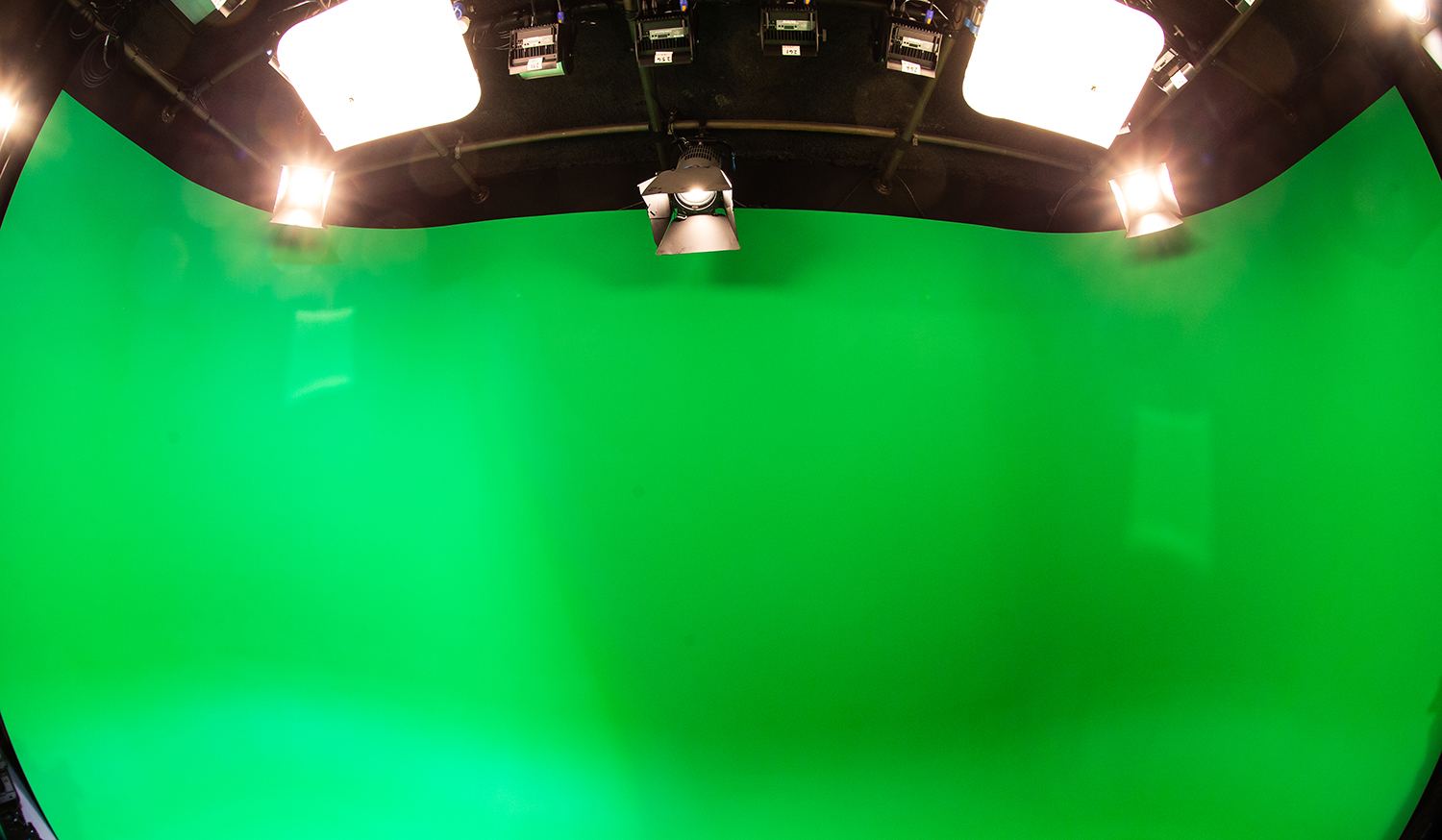 In addition, eye-tracking technology — which pinpoints where players are looking on the screen during gameplay to provide deeper analysis — was installed following opening weekend, and the EA production team is looking to roll it out for the Madden Bowl April 25-27.

“We’ve put in a lot of infrastructure that we can test out and discover the best ways to use these technologies,” Lynch explains. “We’ve got a few other, very cool technologies that we’re in early conversations about with our vendors, and we’re already beta-testing a lot of exciting stuff in the studio. Our main goal is to innovate and find new ways to tell the story and make stars of all our players.”