Sennheiser has been involved in a number of recent projects, including Canada’s La Cité Collégiale, Dobbs Stanford Corporation, and St. John’s University. 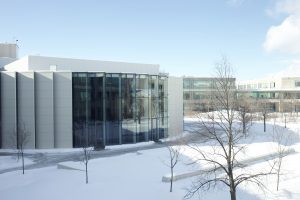 As one of the leading applied arts and technology colleges in Canada, La Cité Collégiale, located in the nation’s capital, prides itself on its innovative, forward-thinking approach. This initiative is extremely apparent in its recently opened Excentricité education facility — a $30 million, 34,000-square-foot technology pavilion officially opened in September 2018 featuring a variety of spaces, including a bistro, gym and 4,000-square-foot immersive theater-esque space boasting 360-degree sound and video.

The 360-degree theater in Excentricité, dubbed The Studio, seats 1,200 people and is used for conferences, live music performances and play productions. Patrick Roy of systems integrator group CBCI Telecom has collaborated with La Cité a variety of times in the past and spec’d the entire Excentricité project. He selected Sennheiser’s Digital 6000 wireless system for its ability to eliminate feedback, its wide dynamic range and its Dante connectivity — a key feature for The Studio. Staying true to its roots, Dante is the future of audio networking and was a key component for La Cité when designing its audio system.

“The Studio features a complete digital system over network with a Dante board,” Roy explained. “It was La Cité’s vision to have a complete Dante system — both audio and video — in the 360-degree Studio. Dante is the new wave with consoles, mics, and speakers all changing to this platform. Depending on the network, it can be much cheaper. So, the Dante connectivity coupled with its high sound quality made the Digital 6000 a perfect fit.”

Installed alongside The Studio’s Digital 6000 system was Sennheiser’s MobileConnect — the company’s system and app that streams audio content via Wi-Fi to smartphones. The MobileConnect smartphone hearing system app is ideal for use in universities where it provides students with personalized audio. Theaters also benefit from the system as it’s an ideal application for attendees using hearing aids. Since The Studio holds both conferences and plays performances, the MobileConnect system was a perfect fit for Roy and his team.

“MobileConnect is great because it offers a state-of-the-art audio experience and is easy to use for the end-user,” Roy said. “It really enhances the listening experience.”

Feedback eliminated
The Studio boasts a 252 feet of 360-degree video, and with close to 50 speakers installed to support the immersive audio-visual experience, Roy and his team were tasked with finding an audio system that would keep feedback to a minimum.

“With so many speakers in one space, you really need a system that can prevent feedback,” Roy explained. “The Studio features a d&b Soundscape system, two-line arrays and Renkus-Heinz ICONYX speakers placed behind the screens as well as speakers specifically for conferences. Finding an audio system that could eliminate feedback was important.”

A truly universal system
Because The Studio holds a variety of different events — from conferences to theater productions to live band performances — Roy needed a multi-purpose system that could deliver crystal-clear audio whatever the application.

“The Digital 6000 Series works great with guitars for live bands and because the space can be rented out for live performances, this was important,” Roy explained. “The Studio was a unique project because of the 360-degree aspect. We made sure to choose only the best system for this project to make the sound adaptable for whatever the space held, whether it was a conference or a play.”

Positive response
After using the system for a few months, Roy said La Cité’s staff have been blown away by the audio in the 360-degree Studio. “The sound in The Studio has far surpassed La Cité’s expectations,” Roy said. “Even the patrons that have attended a performance in the 360-degree studio are saying great things about the audio experience.”

Dobbs Stanford Corporation is recognized as one of the nation’s premier sales representatives of professional AV products in the United States, employing a team of experienced professionals.

“We are truly excited to be working along with Sennheiser, which has a longstanding heritage in professional AV products,” commented Fred Dobbs, owner and president, Dobbs Stanford. “Our mission will be to ensure that professional AV integrators in this region have an exceptional, enjoyable and profitable experience selling Sennheiser technologies to their clients.”

“After being impressed by the professionalism and drive of Dobbs Stanford I am delighted that they have agreed to represent Sennheiser in this important territory,” said Simon Holley, Vice President, Sales & Marketing, Pro Audio Solutions, Sennheiser. “I very much look forward to working closely with the Dobbs Stanford team and seeing our market share continue to grow.” 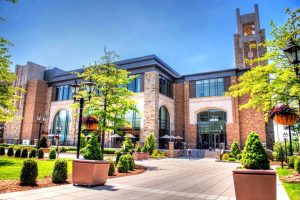 St. John’s University
St. John’s University, a post-secondary research university with 21,346 full and part-time students and five campus locations around the world, is an academically rigorous institution and a founding member of college sports’ famous Big East Conference. With its primary campus located in Queens, New York, St. John’s offers more than 100 bachelor, master, and doctoral degree programs as well as professional certificates. Recently, the University began standardizing the technology within its classrooms, conference rooms, and meeting spaces and settled on Sennheiser’s TeamConnect Ceiling as its primary audio-conferencing solution.

With an international student body and dynamic faculty that are pushing the boundaries of modern post-secondary education, St. John’s primary goal in implementing Sennheiser’s TeamConnect Ceiling conferencing solution was to provide greater flexibility for its faculty, while delivering the best possible communications experience: “When we look at an AV solution, it is meant to facilitate communication, whether inside or outside of the classroom,” says Eric Alvarado, Director of Academic Technology, St. John’s University. “Teaching is at the point where the traditional walls of a classroom are no longer a limitation; so, our spaces have to perform and be flexible.“

The university began a comprehensive upgrade of its classroom technology in 2014, realizing that some of the equipment was dated and that a new, cohesive standard was required. The team proceeded to evaluate the technology needs of each of the five schools of the University, and created a journalized classroom standard with the intent of applying and replicating this standard in each classroom. The new system would need to accommodate the wide-ranging needs of the faculty, and provide the ability to be remotely monitored, managed and measured.

Starting from a known position
Before settling on the TeamConnect Ceiling solution, St. John’s had already been utilizing Sennheiser wireless microphones across its campus. “We started installing the wireless mics in Manhattan around 2013 and we probably have well over 300 wireless microphones from Sennheiser at this point,” explains Salvatore Frucci, Audiovisual Systems Engineer, St. John’s University. “I met our Sennheiser sales representative, Tom Conte, at InfoComm in 2015 and we set up time to demo the TeamConnect Ceiling system, and it was quite impressive. This was the catalyst that started the process of us installing them here on the campus.

“The great thing about TeamConnect is that it really follows your voice around the room with the beamforming technology,” Frucci continues. “This feature caught our attention pretty quick, and as we started deploying them, the difference in intelligibility was night and day.” Currently, St. John’s has TeamConnect Ceiling units in four locations: its St. Augustine Faculty Development Classroom has two of them in one of its larger spaces, and three other units are located in conference rooms across the University’s main campus in Queens.

Getting smart with TeamConnect Ceiling
The technology team at St. John’s appreciates TeamConnect Ceiling not only for its performance and reliability, but for its ease of installation and ‘plug and play’ operation. “It only uses one microphone output into your DSP, so as far as the installation, you are basically just dropping in a 2’ x 2’ tile into the ceiling,” explains Frucci. “There is only one wire running back into your equipment rack, and one wire going into your sound system. Many other products on the market consume up to 8-16 inputs on your interface. This makes configuration easier and also saves rack space.” Once it is installed, the software guides the user through the set-up process. “You do minimal configuration and it really works out of the box,” says Frucci.

Perhaps most importantly, the unit is simple to use for the faculty. On entering the room, they turn the system on and it is fully operational. “With the TeamConnect Ceiling in our rooms, our faculty can focus on delivering content and it picks up everything. If there is a question asked in the back of the room, the professor doesn’t have to repeat the question for the benefit of others who couldn’t hear it — because now everyone can hear it. That becomes key in recording lectures or in important review classes,” Frucci explains.

“We are using Control Cockpit to remotely check the battery levels of our microphones, as well as frequency placement of our wireless mics,” says Frucci. “We have 80 rooms in one building, so you have to be very careful with frequency assignments. Control Cockpit helps us manage this and ensure that all our frequencies are aligned so we don’t have any performance issues.”

With TeamConnect Ceiling up and running, and as the University explores possibilities of rolling it out in other locations, Sennheiser’s latest conferencing solution is helping St. John’s stay at the cutting edge of learning communication. “For us, the notion is that everything has to be consistent from classroom to classroom,” concludes Alvarado. “It makes the user experience more flexible and a lot easier. Also, the number of support calls have fallen off the table because it just works.”