ESPN Doubles Up Production Efforts for MLB in Omaha 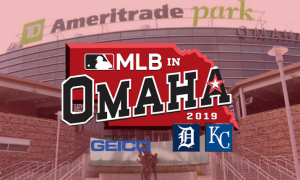 “From a remote-operations perspective, it just made perfect sense. Early on in discussions with production and the College World Series management/ops team, as well as the timing and nature of the event, it was clear that the MLB game would mesh very nicely with the set schedule,” says Paul Horrell, remote operations manager, MLB, ESPN. “For that reason, we looked to adjust the truck and crew schedule to accommodate the MLB game needs while minimizing impact to the College World Series prep. Our College World Series remote-operations team members that were already assigned [to the tournament] took the lead throughout.”

Two-in-One: Meshing a Pair of Productions

With two major events clashing, ESPN has deployed nearly 150 onsite staffers to facilitate game coverage and studio programming. The network needed to bolster their infrastructure in order to accommodate two productions in a short-time.

“With the synergy between having a regular-season MLB game and the Men’s College World Series in the same venue just days apart, we have been able to add a few extra facilities to the standard MLB broadcasts,” says Dick Mullen, operations manager, ESPN. “We’ll be using NEP ND7 for both events at TD Ameritrade, with over 30 cameras utilized in the broadcasts.”

Comprising more than two dozen cameras, the complement includes a Sony HDC-4800 with HFR and super-slow-motion at 960 fps. On the audio side, ESPN placed an on-field mic on Kansas City Royals lead-off hitter and right fielder Whit Merrifield. With the venue being only a 3½-hour drive from Kaufmann Stadium in Missouri, a wave of Royals fans behind the outfield wall had some fun with their fan favorite.

With 1,423 miles between Bristol, CT, and the onsite compound, ESPN leveraged a file-transfer system that bridged the distance.

“With [NEP’s] ND7, we had a full REMNAS [remote near-access storage] file-transfer system,” says Horrell. “We also arranged for fiber connectivity this year for both the MLB game and the College World Series.”

The studio was also a reliable source during the first couple of innings. During a brief truck outage, ESPN made a quick adjustment by displaying whip-around coverage of other MLB games in progress. With the help of the TD Ameritrade Park staff, ESPN used the feeds of the in-venue videoboard cameras and provided audio commentary via in-studio talent. After the truck regained power, the on-air broadcast continued as normal.

“No one likes when mechanical failures happen, and we regret we went off the air,” says NEP U.S. President Glen Levine. “I’m really proud that our field- and engineering-support staff immediately jumped on the problem and worked together to bypass the failed regulator to recover and get us back on the air as quickly as we could.”

For the broadcast, Horrell and his team tapped a graphics setup that has become customary for all MLB on ESPN productions.

“Specifically for the MLB game, we implemented our GREMI workflow,” he says. “[In addition,] we had Viz Graphics and EVS operators in Bristol integrated with the truck.”

The compound hosted a handful of onsite technicians and gear that handled the GREMI (graphics remote integration) aspect of the broadcast.

Bringing MLB to New Frontiers
The “hometown” Royals’ 7-3 victory over the Detroit Tigers isn’t ESPN’s only project with the MLB. As the league strengthens its relationships with entities like the NCAA, ESPN is the backbone of such operations.

“With the first-ever MLB game in Nebraska, especially in concert with the College World Series, it generates a whole new experience. [It’s] very similar to the MLB Little League Classic in Williamsport, PA, that MLB has introduced with Little League and ESPN in recent years,” says Horrell. “These efforts serve to capture the nature of the sport and [also] this particular event.”