The team at CBS Sports HQ must have been in a generous mood Thursday night, because the free streaming network delivered all the excitement from the NBA Draft live with a multi-location setup and expert analysis.

The channel’s core group of experts was gathered in Stamford, CT, and that’s where basketball insiders Hakem Dermish, Gary Parrish, and Matt Norlander offered their perspectives on every move. This team has been tracking NBA-bound players for years, so it was their moment. They were joined by 2006 NBA Coach of the Year and former NBA pro Avery Johnson, who knows what it takes for college talent to make it in the pros. 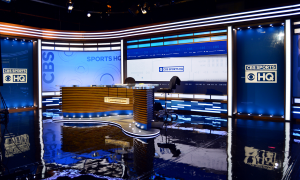 CBS Sports HQ had sets both onsite at Barclays Center and in Stamford, CT.

For onsite highlights, CBS Sports HQ turned to Evan Daniels, who was at Barclays Center in Brooklyn, and Bill Reiter, Reid Forgrave, and Tim Doyle, who all reported remotely.

CBS Sports has covered the NBA Draft for years, but, this time, live video was more important than ever. Text-based offerings like draft trackers, push alerts, and messages on a variety of social platforms were still a major part of the 360-degree strategy, but live video was a bigger element.

Doing the homework was a differentiator for CBS Sports. Partner site 247Sports.com (owned by CBS Interactive) tracks draft prospects starting at high school, so CBS insiders were able to draw on that data, getting feedback from GMs and league personnel about how players might translate to the NBA. Using CBS’s SportsLine algorithms, which have a strong history of predicting how teams will finish the season, CBS Sports HQ offered updated projections and futures analyses for each team as the night went on.

It didn’t take an insider to know that Zion Williamson was the subject of huge interest and that he stands to be a game-changer for the entire league. So CBS Sports put special focus on him, giving a lot of airtime to analysis of his deal with the New Orleans Pelicans, as well as to reactions to the news.

As soon as players are drafted, fans want to know everything about them, especially when they’re foreign players whose names aren’t yet known in the U.S. That’s why CBS Sports HQ prepped its analysts to fill in those gaps, explaining the strengths of the players and what they’re likely able to deliver to the teams that drafted them.

CBS Sports HQ’s true competition is itself and what it did last year. In the case of the NBA Draft, that means creating an even bigger experience for viewers.

“This will be the biggest year of coverage we’ll have done yet: just the range and scope of talent that we’ll bring in, having someone at Barclays, having our new Stamford studio lit up, and again trying to cover it from every way, from the preps to the pros,” said Jeff Gerttula, EVP/GM, CBS Sports Digital, prior to the event. “We have done a lot of video coverage in the last five, six years, but, even before that, our Draft tracker and our prospect analysis was a big focus for us.”

It looks like the effort paid off: both the number of viewers that CBS Sports HQ served and the time spent per viewer more than doubled compared with its 2018 Draft coverage. Viewers were up 171%; time spent rose by 133%.

Regular viewers know that CBS Sports HQ keeps coverage focused on the game, no matter what the game is. There are no extracurricular diversions here. For the NBA Draft, that meant offering detailed examinations of player strengths and how those could impact their teams and then providing team projections. The platform prides itself on tuning out the noise and focusing on the on-court or on-field action.

Although CBS Sports is available on multiple platforms, connected TV is where it sees the most growth.

“Our coverage,” he continued, “is freely available without cable or a subscription, so we know there’s a segment of fans who really like that. We’re playing into that. We’re trying to feed into that connected-TV experience and create innovative products for that audience and stay ahead of it.”