Twitter grabbed the attention of many in the content-creation game last week with the announcement of its new live-video–editing and –distribution tool, LiveCut. The cloud-based web application allows quick editing and sharing of video highlights of a live stream occurring from one’s own Twitter account.

It’s a move that the social-media giant has been chatting about since acquiring a similar technology in SnappyTV back in 2014. It was in 2017, however, that Twitter actively spoke about shutting down Snappy and introducing its own replacement. 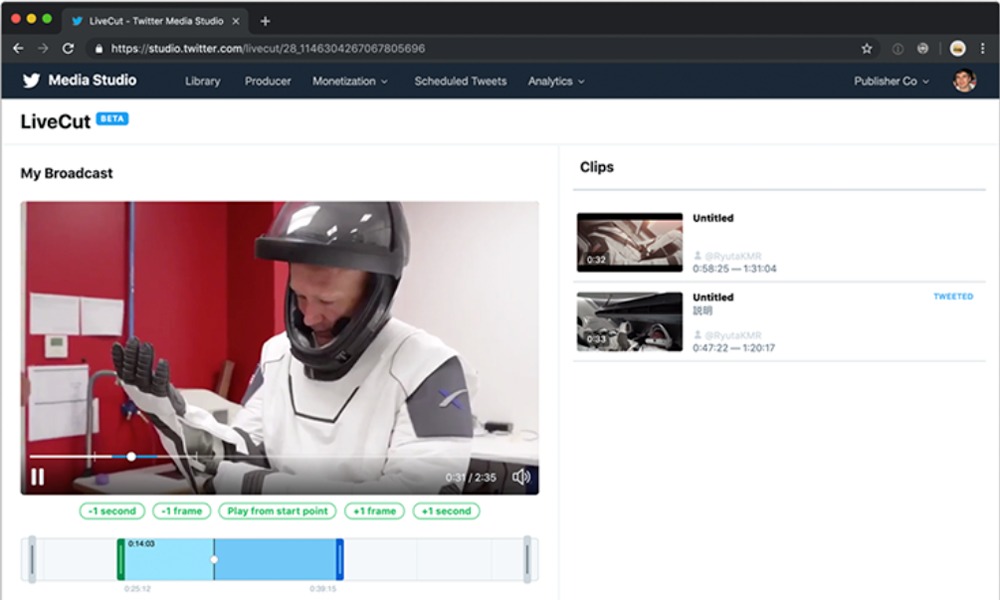 Last week, Twitter introduced LiveCut, a web-based application for editing of highlight clips from a live stream on the social platform.

Now that time has come. So, what does the move mean for sports-video content creators?

At first glance, users will find a video clipper very similar to that of SnappyTV but one baked seamlessly into a more comprehensive video ecosystem offered by Twitter, known as Media Studio. For that reason, Twitter Product Manager Kevin Cohen, who is overseeing LiveCut, recommends it not be considered simply a like-for-like replacement of SnappyTV.

“I think LiveCut brings a lot more to the table in comparison to SnappyTV,” he says. “All of your broadcasts [in Media Studio] are going to be available to be clipped in LiveCut, which is very different from SnappyTV, where you needed to send a stream to Twitter and another stream to SnappyTV in order to clip from it. That was too much of a burden, especially for groups like [sports teams], who in their postgame press conferences needed to do two streams at once. We’re bringing that functionality, and I think that’s going to be really beneficial for partners.”

The usability of LiveCut sticks to the roots of what made SnappyTV popular with digital and social-video content distributors: its no-frills UX was easy to learn (or teach), and it’s free. Those factors became very obvious to the design team as they worked through user research with partners who were heavy users of SnappyTV. Sure, Twitter could have loaded LiveCut up with a world of new features, but much of the user feedback received indicated that clients wanted them to keep it simple.

Using LiveCut, as with SnappyTV, is fairly straightforward. You can set an in and an out on your live timeline, add in some metadata (such as a title and short description), compose your tweet, and quickly publish a video to your account. “We wanted to honor some of those design principals such that there was some familiarity with clipping in this new product,” says Cohen.

It’s the integration within Twitter’s Media Studio where content distributors will find some new value to play around with. With LiveCut, users can live-clip any piece of video content that either is currently live or has been either posted to one’s Twitter account or captured using a Twitter-based means, like Twitter’s new camera or Periscope. LiveCut will also house all consumption metrics, like video views, time spent watching, completion rate for videos on an account.

“The integration of the whole thing, I think, is the game-changer,” says Cohen. “Media Studio really becomes that one-stop shop for all of your publishing needs across Twitter. Media Studio for a long time has been a great source for managing all of your content across Twitter for monetizing it and analyzing it. Over the last year or so and now with the introduction of LiveCut, we have really bolstered the efficacy of our live product within Media Studio, and we’ve started to feel the impact of that not just from sports partners but also those on the advertiser side who are becoming more and more content creators in and of themselves.”

Are there plans to expand on LiveCut and offer more tools and options for super-users, who might want to get more bang for their buck in their live clipping for Twitter? Sure. According to Cohen, this version of LiveCut is definitely a version 1.0, and Twitter believes deeply in the value the product brings to content creators of its platform. Investment in LiveCut will continue. Next iterations will depend on user feedback after a few months of use in the field.

“There were critical principles to the product that we heard from our partners on and learned from our usability sessions; we wanted LiveCut to be fast, simple, and free,” says Cohen. “We chose to invest in that as early as possible. Keeping in mind, we have super-users like big sports leagues and collegiate athletic departments that want the robust features and functionality, but we knew we needed to nail those principles off the bat, and that’s where we focused our attention at first with the understanding that we will continue to iterate on the product.”

Twitter also found it very important to release the product over the summer, most notably to allow its many collegiate-sports partners to get their hands on it prior to the start of the new athletics season in August. Also, although SnappyTV will be shutting down, it won’t go dark until the end of the calendar year.

“We wanted to ensure that our partners had a really long lead time in getting familiar with LiveCut and slowly transitioning over to using LiveCut from SnappyTV,” says Cohen. “I felt it was really important that we offer our partners around six months or so to have that opportunity to transition.”