Mediapro has been selected by the Paraguayan Football Association (AFP) as the company to implement VAR technology (Video Assistant Referee) in the country’s División de Honor for the next three seasons: 2020, 2021 and 2022. 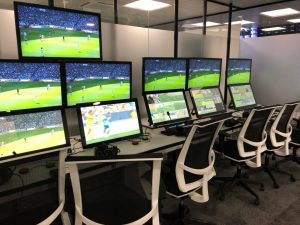 Furthermore, drawing on Mediapro’s extensive experience, the company will also be responsible for the training and education of referees and certifying stadiums in order for them to implement VAR systems from January 2020, to coincide with the start of the Torneo Apertura. It will follow a decentralized model with three VAR units being sent to the stadiums to provide video refereeing services to a total of 792 games.

This agreement with which the Executive Committee of the Paraguayan Football Association places its trust in Mediapro follows on from the group’s experience as providers of VAR in the Copa Libertadores and the Copa América, to implement the VAR technology in Paraguayan football for the first time.

The new deal sees the number of federations and countries who have trusted the Mediapro group as their official VAR provider continue to grow. The company currently offers its services to official league competitions in Portugal, Greece, Mexico, Chile, The United Arab Emirates, Morocco, Kuwait, Colombia, and Paraguay. Elsewhere, it also provides the video refereeing services for some of the biggest continental tournaments in the world, both at club and international level, including the aforementioned Copa América Brazil 2019, The African Cup of Nations in Egypt 2019 and the upcoming 2019 FIFA U-17 World Cup in Brazil.