Mic arrays designed for corporate uses are attached to the bottom of the scoreboard for NBA, NHL games

Some people might complain that sports has become too corporate, but in one recent instance, an audio system developed for corporate applications is making the sports sound experience a lot more vivid.

Scotiabank Arena in Toronto, home to the NBA’s Raptors and the NHL Maple Leafs, wanted to give its suites and club patrons a more intimate sonic experience during basketball and hockey games, by bringing more court and ice effects sounds into those areas. Those seats otherwise receive just the acoustical bowl and PA system sounds, and that audio can be attenuated somewhat due to glass and other structural elements. 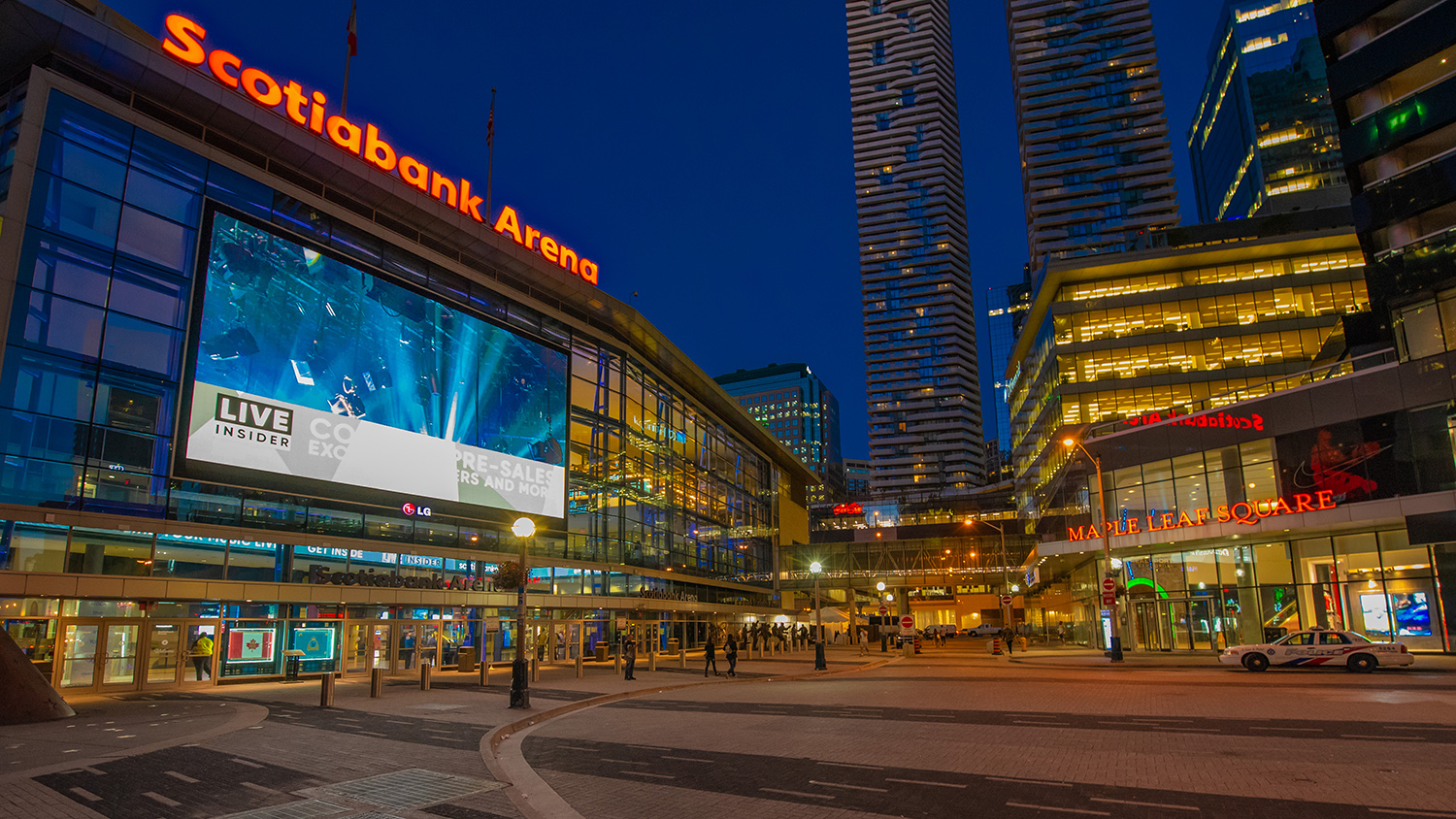 A design using an array of shotgun microphones was initially specified to pick up rink audio underneath the central scoreboard clock. However, Steve Svensson, senior field engineer at Westbury National, the AV systems integrator that has designed and installed some of the existing audio systems in the venue, proposed an alternate design using a Shure MXA910 ceiling array microphone system, an array of eight highly directional transducers he’d installed before in dozens of boardrooms and other corporate meeting spaces. Working with senior audio engineer Courtney Ross, who also supervises venue technology operations, Westbury National did a test with one MXA910 array affixed to the bottom of the scoreboard (along with a pair of shotguns, for comparison), 42 feet above and at a 45-degree angle to a powered speaker on the court floor playing back some pre-recorded dialog audio.

“We A/B-ed the MXA and the shotguns and the result was excellent,” he recalls. “The [MXA’s] pickup from the floor was tight and very clear, and with a reduced level of unwanted ambient sound from the venue versus the shotguns.”

However, the microphone array had another advantage. “The array’s ability to be aimed at a target using a browser interface instead of [manual] adjustment was the initial argument for the Shure array versus conventional shotguns,” he explains. “I programmed the array’s pickup pattern into presets and DSP tunings that are customized to fit the needs of each sports application and recalled directly from the DSP system’s control screen. The alternative would have been using a scissor lift to manually adjust the shotgun mics for each type of sport for each game.”

As a result of the test, a pair of Shure MXA 910s was installed on the bottom of the scoreboard last spring, in time for the overlapping postseason play of both the Toronto Raptors and the Toronto Maple Leafs. It’s part of a planned technical and architectural renovation that includes a new 61-by-35-foot main video screen, 40% larger than the one it’s replacing, as well as a new pedestrian bridge, described by venue owner Maple Leaf Sports & Entertainment as a “reimagination” of the venue, which opened in 1999.

Added To The Broadcast

Svensson says that Scotiabank Arena staffers reported being able to hear a substantial difference in the nature of the sound being routed to the suites and the club, calling it “more intimate and present,” he says. But those qualities also made the audio a good added component for the broadcast audio, so a feed from the two Shure arrays is also sent to the venue’s broadcast matrix, where the effects sounds could be added the televised audio submixes. As with the in-venue sound, Svensson says the reports he got back from the A1s who used it were decidedly positive.

He says the plan is to continue to fine-tune the ceiling-array microphones underneath the scoreboard, using the Harman/BSS SoundWeb London BLU-Link DSP to tailor the frequency range to better focus on key effects elements, such as bringing out the bounce sound of the ball for NBA games, which is often overshadowed by the constant squeaking of players’ shoes. And if the opportunity arises, he says he’d advocate for using this made-for-corporate-audio-applications microphone array in sports venues in the future, as it’s proving itself able to bring the kinds of effects audio television viewers have come to expect into every corner of the venue, while also giving the broadcast audio mixer another useful tool.

“It just really adds a entire new dimension to the sounds from the court and the ice,” says Svensson.