ACC Network Launch Day: With Buy-In From ESPN and All 15 Schools, Newest College Sports Network Is Poised for Success

“Hang on, I just got to put down the paper bag I’ve been breathing into.”

Even for an industry veteran like ESPN Senior Coordinating Producer Amy Rosenfeld, this feeling never goes away.

With the network since 2007, Rosenfeld has worked her fair share of major events, network launches, and property debuts, but, as the long-awaited and highly anticipated ACC Network kicks off on Thursday at 7 p.m. ET, the butterflies will be just as intense as on her first day on the job. 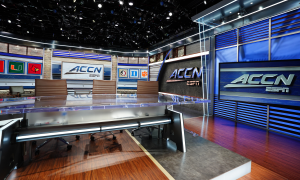 After years of preparations, the ACC Network launches on Thursday at 7 p.m. ET.

“We are feeling really, really lucky to be able to be part of something that not a lot of people get to do,” says Rosenfeld, whose career encompassed work on numerous Olympics, FIFA World Cups, X Games, and much more. “We’re going to put a lot of energy into Aug. 22, and, hopefully, we are going to put on a really robust, interesting, and exciting show. What we’ve tried to emphasize to everyone, though, is [that] we better have a little left in the tank because, as far as I’m aware, we’re still on the air on Aug. 23 and Aug. 24 and in September and in October and in November.”

To say that this day has been a long time coming would be an understatement. For more than three years, the Atlantic Coast Conference’s 15 member institutions have been expanding staffs, campaigning for funding (even in front of the government in their state capitals), remodeling their venues, and building multimillion-dollar broadcast facilities all to be a part of what promises to be the most technologically comprehensive and advanced college-sports television network to date.

It has been complete buy-in, from the brass at ESPN to athletic directors across the ACC map, that has helped set up this network for success on its opening day.

“This is not blowing smoke here: the support at ESPN, I’ll tell you, [has] that same feel like when we did [FIFA] World Cups,” says Rosenfeld. “The company is all in. One of the great benefits of being in Bristol is the access to the people, not just the infrastructure. That’s where I take a lot of relief and joy in that we couldn’t be in a better place and have a better support structure.”

She and ESPN Director, Remote Production Operations, Rex Arends (who has now worked on three of the college network launches: besides this one, Big Ten Network in 2007 and SEC Network in 2015) have served as ESPN liaison to all the schools. “I mean there was a time where Rex and I were traveling around to the schools and were calling it the ‘IF Network’ because there was not even a contract signed,” she says. “But we wanted to start having conversations with them about what this would look and feel like if we were to launch the ACC Network.”

A Path Different From the SEC Network’s
ESPN has, of course, fought through this forest before, launching the University of Texas’s Longhorn Network in August 2011 and, more broadly, the wildly successful SEC Network in 2015.

Another key executive, Stephanie Druly, EVP, event and studio production, ESPN, has led the charge on all three network debuts. However, to say the ACC Network is simply a cut-and-paste of the SEC template would be a gross underestimation of this project. The ACC Network has benefited from nearly a decade’s worth of learning how to prepare and, most important, maintain a sports network of this scope.

Prior to the SEC Network launch, sure, each campus bolstered its onsite production facilities substantially, but a large amount of the focus went into acquiring equipment and preparing the schools for what was largely expected to be streamed productions exclusively. Quickly, those school-produced live events were being relied on to fill out the SEC Network linear schedule and were even finding their way onto other networks in the ESPN family.

As ESPN prepared the ACC schools this time around, its team had the foresight to spend a good 18 months training the staffs on the art, philosophy, and execution of live sports television.

“It was something that we really, frankly, didn’t have the ability to do when we launched the SEC Network,” says Aronowitz. “When we launched the SEC Network, a lot of us came on board shortly before the network launched. The school piece was meant to be a digital play. We didn’t really think through the process of mentoring and educating and supporting the schools on that level. So the four-plus years of experience that we’ve [attained with] the SEC Network taught us how we needed to ramp up for the ACC Network.” 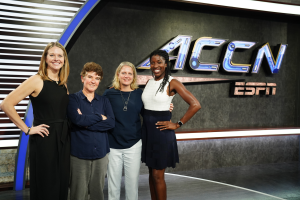 On top of that, many of the 15 ACC Network institutions are already seasoned pros at producing live events from their studios for ESPN. Over the past 18 months, more than 120 games produced by the staffs and facilities of the ACC schools have aired on linear ESPN networks.

A huge factor in the ACC Network’s successful lead-up to its debut has been the emphasis on people. All of the school’s 15 athletic directors, in addition to budgeting for facilities, signed off on the expansion of their content-creation, technical, and engineering staffs to support the year-round efforts.

“[That’s], arguably, the biggest difference from other ventures that we have embarked on at ESPN,” says Aronowitz. “The administrations have bought into the idea that they need the manpower to support the volume. There has been a lot of really talented hires recently at a lot of these schools that are going to be able to take on the load that the ACC Network will present. They all buy into what the goal is. So [we’re] very excited about the production facilities but even more excited about the personalities and the personnel that each school has hired to support the ACC Network.”

That staff expansion is notable in its size. Rosenfeld and Aronowitz weren’t shy about discussing the reality of staff burnout on a project like this. The hundreds and hundreds of live events produced requires lots of people working many hours to make all of them possible for viewers to enjoy.

“It’s very realistic,” says Aronowitz, “and it’s, honestly, a concern that we have had and have been very vocal about with the administrators on campus from the very beginning. We lived it in the other conferences, and we have seen the burnout factor. We’ve seen what it’s like to go through an entire academic year and get to the spring and you’re just exhausted because you’ve already done a hundred events and you’re still responsible for all of your videoboard [shows], the athletic website, and all of the other school video-production needs. The ACC administrations certainly have heard our concerns about that for them and their people and have, I believe, staffed appropriately, in most instances, to combat the volume.”

ESPN’s End of the Bargain
Although each of the schools has lived up to the large responsibility involved in this project, ESPN’s internal team has delivered on its end of the bargain, developing a brand-new and unique graphics package, a full ACC Network-dedicated studio on its Bristol, CT, campus, and new music and animations and offering production and operations training and support to the schools.

Another huge piece in establishing the ACC Network is making it just that: a network. ESPN has laid out an all-fiber infrastructure that connects not only all the sports venues on campus to each school’s centralized control room but a network that connects all the schools to all major ESPN facilities and to each other. On top of that has been placed a robust cloud-based network within which all 15 of the schools can exchange content and important templates with each other and receive important updates from the ESPN mothership.

“The server is a game-changer,” says Rosenfeld. “That’s something that we had put on the top of the wish list and got tremendous support from our superiors at ESPN that this will expedite the transfer of content, graphics, music, animations, rules, everything. [It] eliminates the need to call an assignment desk and book a feed and all of those things. What’s great is, the schools can operate between themselves, with content sharing separate from ESPN; they can partner with each other, and they don’t need to use ESPN as this way station to facilitate those transfers. That’s a really big win.”

ESPN will continue to handle production of many high-profile conference sports events throughout the year. The network will still roll up 53-ft. expando production trucks to produce significant football and basketball games airing on ESPN networks outside of ACCN. However, don’t be surprised if the day comes when these school-built facilities become home to more and more productions that air on ESPN networks. For example, ESPN produced a Duke basketball game (which rated over a 1.0) from Blue Devil Network’s control room last winter, and many baseball and softball Super Regionals were broadcast directly from others. Even prior to launch, the conference networks have proved their ability.