Live From the US Open: Gearhouse Broadcast Serves Up Tech for Multiple Clients

Automated production for coverage of outer courts is key

Gearhouse Broadcast is once again supporting ESPN’s efforts (and those of others) at the US Open. The biggest advances at this year’s tournament technically have been centered on ACES, the automated production area that handles the outer courts. The nine teams that handled those courts were moved to a second floor that had been added to the production facility, providing voiceover booths, a second audio room, and increased media-management capabilities that gave a lot more feeds to those teams. 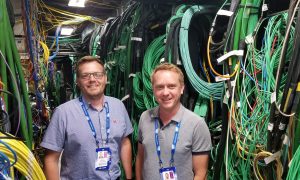 “External beauty cameras were added as well as Hawkeye line-calling,” says Gearhouse Broadcast Managing Director Ed Tischler. “ESPN was very conscious that the high percentage of their output that is produced from the outer courts has production values that are as high as possible.”

Arthur Ashe Stadium and Louis Armstrong Stadium also received a technology refresh this year. Sony HDC-4300 cameras, Sony P43 cameras, and Panasonic AW-UE70 PTZ cameras have been deployed in both. According to Tischler, the other big change this year was the move to Grass Valley Maverick and Kahuna production switchers, laying the groundwork for a technical plant that can meet the unique needs of ESPN’s domestic broadcast, the world-feed team, and the unilateral rightsholders onsite.

“Those switchers will help with any future move to an IP world, where multiple program cuts can be done without having to commit to a single format because FormatFusion can do multiple outputs and formats,” he explains. “Everyone can choose what they want to do as the facility will be format-agnostic and forward-looking.”

The US Open is a multi-client universe for Gearhouse, which also provides the technical backbone for Wowow, Eurosport, and Prime; the last is streaming the US Open in the UK.