As the Spring 2020 semester kicks off, students at Indiana University (IU) will get hands-on professional-network experience that can’t be replicated in a classroom or learned from a textbook. On Friday, Jan. 24, through CBS Sports’ Experiences division, the university’s production team will not only speak to industry stalwarts but will also be involved in a live, on-campus taping of We Need To Talk.

“Sports television has absolutely exploded, and now there are tremendous opportunities,” says Emilie Deutsch, VP, original programming and features, CBS Sports. “It’ll be great to be able to share our experience and come into contact with young, innovative minds who will one day be the future of our industry.”

Unique Opportunity: How CBS Sports Linked Up With Indiana University

When the concept was devised by CBS Sports in late November, the broadcaster needed an appropriate location for the first stop on its university tour. Discussions of potential spots indicated a university that CBS has a lot of history with. In addition, the programming team will use the show as a nice teaser for Indiana men’s basketball’s marquee matchup with No. 17 University of Maryland on Sunday, Jan. 26 at 1 p.m. ET. 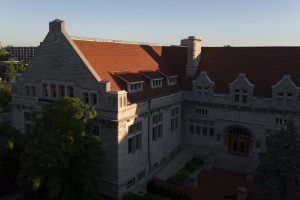 “Indiana has a fabulous studio and a great video department. Several of the people that I work with on a regular basis — like shooters, editors, and production assistants — have come from IU. We have a long relationship with them and Jay Kincaid [director, facilities and technology, Indiana University], who is also one of our directors. For a pilot, this seemed like the perfect place to go.”

On the university side, the administration wanted Kincaid and production students at the institution’s Media School to have an integral role of the show’s on-campus taping. And the university also wanted other facets of the university to join in on the initiative and spread the word.

“It was really important to get heavy involvement from [students], so we also have a large social-media and marketing team to promote this and help students become aware that this is going on,” says Chuck Carney, director, media relations, Indiana University. “The [Media School] faculty is really connected with people in the industry, so this event tied into that.” 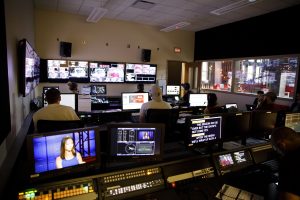 Inside Franklin Hall, the IU video-production staff is mostly composed of students.

The event not only helps CBS Sports produce a show outside the normal confines of its home studio, but it also gives Indiana a chance to flaunt the strengths and skills of its hardworking undergraduates.

“A lot of these students know about production because they get to work in a studio and within the Media School,” adds Carney. “They’re getting real-life experience every day at IU, and, because of that, they’re getting hired by companies to do production.”

Cultivation of the industry’s next generation of professionals will be evident in multiple breakout sessions with the show’s on-air team and creative leaders.

“We have a mentoring session that we’ve organized with students and a lot of CBS personnel from different departments — like marketing, programming, and PR — that will sit down with the students in the morning,” says Deutsch. “We will aso have students following our producer, Amy Salmanson, and director, Suzanne Smith, throughout the day in the control room.” 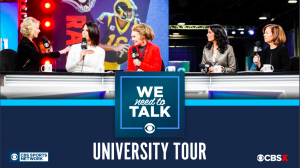 Moments like these clearly indicate the progress that is going on in the industry. At Indiana, the event’s ethos perfectly aligns with the Media School’s core values of providing equality to anyone who is interested in professions in sports television.

“The program in the Media School emphasizes opportunities for women,” notes Carney, “so it’s huge for all of our students but particularly for women in sports broadcasting. Lesley has clearly been a leader; for our students to hear from her and other anchors who have achieved success, it’s a great way to see where things are now and to lay out the potential potholes in the road and potential things to look out for.”

The Show’s Rundown: More Than a Campus Visit and a Show
Although the show hits the airwaves on Friday, the actual work started at the beginning of this week. It’s only fitting that content creation was started by a Hoosier heading back to his former stomping grounds.

“We have a former Indiana student named Mitch Fee, who will be out there early to shoot scenic shots of campus,” says Deutsch. “We’ll also shoot a behind-the-scenes sizzle reel to to use to promote this concept.” 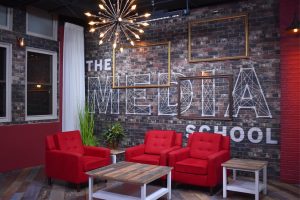 The Media School at IU will host conversations with executives from different departments at CBS.

The network will deploy students in a variety of roles for the live show. For audio, a student will serve as an A2 audio engineer. Next to the set, another will fill the role of stage manager. In the control room, other individuals will facilitate graphics, operate the robotic camera, and monitor playback feeds.

The learning experience doesn’t include only those who are putting in the work. For other interested students in attendance, the day’s schedule will be jam-packed. On the show, the crowd will have a chance to hear a taped conversation between Visser and Dallas Mavericks owner and Indiana Class of 1981 graduate Mark Cuban. Other familiar Hoosiers who will join the show live are the school’s head football coach Tom Allen and two-time Olympic gold-medal winner and IU alum Lilly King.

Besides an opportunity to network with industry notables and work on a live television show, a whole other side of the day will give students a chance to listen to a live conversation with Visser and Class of 1971 graduate Angelo Pizzo, screenwriter and producer of a film close to the hearts of all who attend the university, Hoosiers.

Honoring the Past by Aiding the Future
In a year dedicated to celebrating the institution’s 200th birthday, CBS is using another important anniversary to convey the message of this high-profile show to the viewing masses.

“The point of this event is to get the word of We Need To Talk out there, especially in 2020 since this is the 100th anniversary of women’s suffrage,” says Deutsch. “It’s a perfect time to focus on women in sports and expand the reach of the show.”

And with these two significant dates occurring together, there’s no better time to help the future of sports-video production.

“The networking [aspect] is really valuable,” says Carney. “That’s where [students] will be able to sit down, meet face to face, and let these professionals know who they are and what they’re about. That’s the key to finding your role and moving up in the business.”