In the territory nestled between Illinois and Ohio, the game of basketball has become synonymous with the folks who live there. Whether it’s the cinematic classic Hoosiers, the blue-collar story of Larry Legend, or the candy-cane–striped warmups worn by the ballers in Bloomington, Indianans love their hoops. Similar to Fox Sports North’s Hockey Day Minnesota, Fox Sports Indiana’s 27-hour-long Basketball Day Indiana this weekend will include four high school games, two Indiana Pacers games, and nods to the state’s storied basketball past. 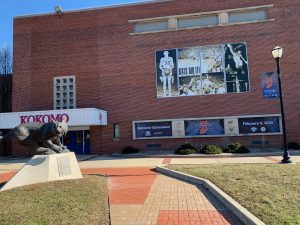 The statewide Basketball Day Indiana will be centralized in Memorial Gym in Kokomo.

Since the event’s ethos is to treasure the past and harness the future of the sport in Indiana, Fox Sports Indiana went back to the state’s roots and decided to host the basketball-centric festival in Memorial Gym, a 70-year-old structure that sits 60 miles north of Indianapolis in the town of Kokomo. The scene will be perfect for opportunities in storytelling and playing toward nostalgia, but the aged structure comes with a set of unique challenges.

“It’s not cabled for television, and there’s no sure power available, so we’re bringing in our own,” says Mago. “And while it seats 5,200, it’s a relatively tight building. The architecture of the building limits your size and camera angles.”

To establish a stable connection, the network is relying on a production workflow that comes with a set of redundancies. The plan is to also provide live updates from other sites where basketball games are taking place. 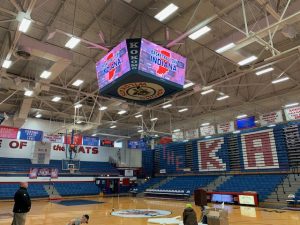 The 70-year-old Memorial Gym presents a unique set of production and logistical challenges.

“Our primary feed from Kokomo will be by satellite, but IP will serve as the backup feed from Memorial Gym and from Bankers Life Fieldhouse [where the Pacers play],” he explains. “We’ve also installed a big Ethernet conduit, so we’ll be connected via IP from Bloomington, where we’ll have reports from the Indiana-Purdue game.”

As for pregame content, Fox Sports Indiana will accommodate an edition of Basketball Ball Day Live, starting at 10 a.m. on a congested Saturday. When you pack a pregame show inside an already cluttered high school gymnasium, it’s necessary to do a bit of rearranging.

“We’re building a set behind one of the baselines with an LED wall,” says Mago. ”To do that, a small section of bleachers will have to be pushed back.”

The quaint Memorial Gym will house a wealth of technological firepower on Saturday. To top off the 14 cameras in this year’s complement, above-the-rim cameras will be hoisted behind each basket’s backboard for unique perspectives on the action. 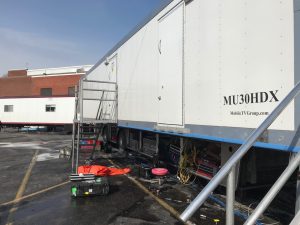 Mobile TV Group’s 30HDX is parked outside of Memorial Gym as the broadcast’s backbone.

“We’re renting two full systems that are the same kind that we use in an NBA game,” notes Mago. “They’ll be used for both live and replay.”

In addition to the 14 cameras used for the game and the LED wall used for the pregame show, a jib camera will make an appearance during the day’s events as well.

At the helm, Mobile TV Group’s 30HDX mobile unit will have its hands full for the games in Kokomo. As the broadcast’s backbone, approximately 65 onsite staffers will facilitate both the pregame telecast and the four games that will take place at Memorial Gym.

A Long Day and Night: 27 Hours of All Things Indiana Basketball
Twenty-seven hours is a lot of time to fill. Fox Sports will be throwing the kitchen sink at this behemoth of an initiative, from throwback telecasts to an exhibition game between two community pillars.

“It’s just going to be a very long day of live television since we’ll be on the air in Kokomo from 10 a.m. to 7 p.m. ET,” says Mago. “We’ve produced quite a few features to run between games, and we’re editing down classic high school games to fill the overnight hours. In addition, there will also be a Kokomo police vs. fire exhibition game on Friday night.” 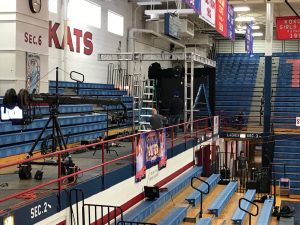 A jib camera will make an appearance alongside two above-the-rim systems.

Most professional teams in the league don’t participate in games on consecutive nights, let alone playing both at home. For this special occasion, the Pacers will play back-to-back home games, and the Fox Sports Indiana live telecast from Bankers Life Fieldhouse will offer content produced from the high school games.

“We’ll show highlights of the game [between the Kokomo Police vs. Fire Departments] during our Pacers telecast Friday night,” Mago adds. “It’s unusual to have back-to-back home games, but it presents a great opportunity to start the Basketball Day celebration early.”

Last year’s event focused on basketball’s expansive outreach throughout the entire state. With more than 273 high schools hosting games on Saturday, the power of social media will once again connect towns as far north as South Bend and as far south as Rockport.

“We’ve sent Basketball Day banners to all of the high schools throughout the state that are hosting home games this weekend,” says Mago. “We’re encouraging them to post photos to social media with the hashtag #BasketballDayIndiana and show some of those on-air.” 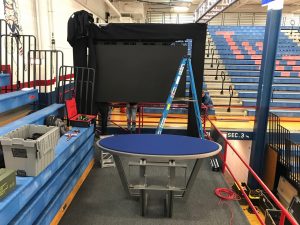 Fox Sports Indiana is constructing a studio set behind one of the baselines.

Love & Basketball: Fox Sports Ignites Citizens’ Passion for the Game
For fans across the state, the annual event is an opportunity to reflect on their connection to basketball and to those who have had the chance to play it. For Fox Sports Indiana, it’s a chance to show gratitude to the sport that has helped define what it means to be a Hoosier and to salute the viewers who tune in every day.

“With Kokomo serving as the host city for Basketball Day, the history of Memorial Gymnasium and enthusiasm of this community make it an ideal setting,” says Mago. “It has been great to make Basketball Day a statewide event.”