HPA Tech Retreat: ABC, AWS, Diversified, and Game Creek on the Opportunities and Challenges of Moving to IP

Eliminating proprietary hardware, speeding innovation, and shifting to the cloud are some of the benefits

Although video has been distributed over IP on the internet for decades, professional-production and -distribution infrastructure is still dominated by traditional baseband technologies. However, moving to IP promises an array of benefits, including shifting away from proprietary hardware, accelerating innovation and upgrade cycles, and transitioning on-premises infrastructure to the cloud. At the HPA Tech Retreat’s opening day of TR-X sessions, technology execs from ABC News, Amazon Web Services, Diversified, and Game Creek Video discussed the evolution of video-distribution infrastructure to IP and how IP broadcast facilities and organizations are deploying IP-based workflows.

Each speaker on the panel – which was moderated by Mike Cronk, Grass Valley’s VP of Core Technology  and Chairman of AIMS (Alliance for IP Media Solutions) – offered a prime example of how their respective organizations are blazing the trail for IP-based and cloud-based media workflows: Disney/ABC will be opening a new IP-based facility in 2024, Game Creek Video has several IP-based trucks on the road (one of which served Fox Sports’ Super Bowl LIV production), AWS is working with Fox Corp. on a cloud-based production/delivery platform, and Diversified served as integrator on WarnerMedia’s new IP-based CNN facility.

Disney plans to shift its New York operations (ABC HQ, WABC News, offices, production facilities and studios) to a new, totally IP-based facility in Manhattan’s Hudson Square neighborhood — set to open in 2024. In the meantime, the company is integrating IP-based solutions at its Upper West Side facility. 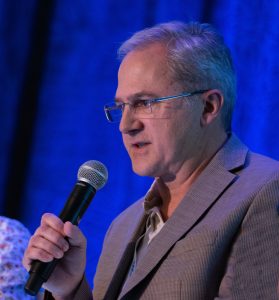 On transitioning to IP: “At the Upper West Side [facility], we have about a dozen SDI routers within our plant now that we’re slowly replacing with video over IP. Obviously, one of the things you get in video over IP is scale. When you have SDI, you really can’t do anything much bigger than 1152×1152. We are now replacing the [older routers] and [transitioning] to an Evertz EXE [router] that is slowly [growing] Right now, it’s about 2800×2800 and getting bigger as it goes along.”

On the timeline for the new Hudson Square IP-based facility: “The big news is that we’re building a new facility in lower Manhattan. … The timeline is key; it’s not often you get a timeline of this [length]. We started this planning a year or two ago, and we’re looking for occupancy in mid 2024. That means you have to do the build in 2023, and you have to make the engineering decisions by 2022. That gives us a few years to plan out what we want to do in the new facility, and you don’t get to do that quite often.”

On how IP infrastructure can enable cloud-based workflows: “Essentially, the concept is, if you have an on-prem facility, how can you set that up to use the cloud to move into an off-prem environment? And then how does orchestration and resources and security go around all that? The on-prem facility will be all [SMPTE ST] 2110 with PTP and multicast, but how do you move that into the cloud? Those are the conversations we’re trying to foster, and that’s why we’re talking to people like [AWS] and a lot of other people we might not have normally talked to in the past.”

Game Creek Video has rolled out more than a half dozen IP-based mobile units and recently worked with Fox Sports to produce Super Bowl LIV in 1080p HDR (upconverted to 4K HDR for distribution) using an IP-based truck. 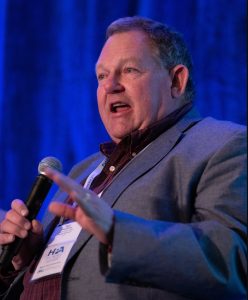 On why the company is transitioning its trucks to IP: “The main reason we ended up going with [IP] was because of the amount of monitors and feeds we had. There were just so many. We built the main [NFL on Fox] truck [Encore] in 2015, and we now have put five trucks with Lawo 2110 [IP router with an Arista switch] on the road in the last six months. The amount of monitors required means that you just can’t do it in baseband.”

On the Super Bowl LIV production: “We didn’t do full IP [at Super Bowl LIV]. The primary truck was using Evertz [IP routing], and that was where everything went through, but the secondary truck was still baseband, and, on the follow trucks, we were doing SMPTE ST 2110. So we had a combination of everything coming together connected via fiber.”

On the challenges of moving to IP: “It also comes down to profitability and being able to get the job done and not having failure. You can’t have failure whether it’s the Super Bowl or on a small fishing show. There are so many things you have to deal with [for IP]: everything from cooling to power to space to noise. … But I believe it’s the right way to go.”

Fox Heads to the Cloud With AWS

AWS recently inked a multiyear deal with Fox Corp. to create a new cloud-based media-production/delivery platform that will distribute content to MVPDs, affiliate stations, and OTT providers (marking the first time that a single platform will be used to deliver both traditional broadcast and direct-to-consumer streaming services). 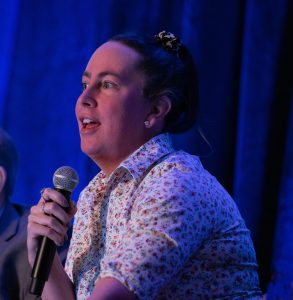 Clare Southey, Specialist Solutions Architect, AWS
On the Fox deal: “Fox is planning to move its entire broadcast infrastructure to the cloud quickly, and it’s partnering with AWS to do that using a software-based workflow. Fox is looking to move everything — live production, encoding, multiplexing, and their editing workflows — to the cloud.”

On Fox’s using the first AWS Local Zone within its operations to enable single-digit millisecond latency: “[Fox has] also selected AWS Local Zone, which will allow them to have low-latency connections, and AWS has agreed to deliver a regional extension in Los Angeles with low latency for visual effects and desktop editing. AWS is also delivering statistical multiplexing with our live-encoding platform, which has been a significant win as well. And we will continue to talk to other customers about broadcast.”

On the advantages of moving broadcast workflows to the cloud: “For me, the value proposition here isn’t so much networking. Rather, it’s software-defined video workflows. The network is just an enabler in my mind. What people really want is the ability to experiment with content. Customers come to us wanting to experiment with a new show, or they have a [switcher], and they wish they had another M/E. With software-defined workflows, those abilities are unlocked for them. While the network is important, it is, ultimately, just an enabler to those software-defined workflows.”

Diversified served has served as systems integrator for more than two dozen IP-based facility projects, including WarnerMedia’s new CNN broadcast center at 30 Hudson Yards in New York City, which is completely based on the SMPTE ST 2110 IP networking standard. 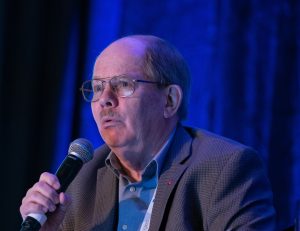 Karl Paulsen, CTO, Diversified
On why WarnerMedia/CNN elected to base its new facility on IP infrastructure: “Bob Hesskamp [EVP, engineering, WarnerMedia] said they did not want a facility to go online and that, the day it went online, it could be out of date or obsolete. So that was really their major choice in going in the direction of IP.”

On when to make the jump to IP: “The big questions we get are when should we do this? Is now the right time? How long is it going to take to build? And I usually go back and say, when PCs first started out, we asked the same questions in the early ’80’s: when is a good time to buy a computer? Well, you could keep waiting and waiting, and you still wouldn’t own a computer today. You’re being driven into this just by the nature of the way that technology is moving.”

On where the industry stands currently in the transition timeline from baseband to IP: “From a timeline perspective, … we are somewhere still in the early, innovators stage of this development. Our first projects were done in 2016, and now we’re at the point, as the ecosystems are maturing and continuing, we’re starting to develop and perfect best practices. How far do we take this? Is the ecosystem going in the right direction? Is enough of the standards in place to do a fluid complete system immediately? I think we’re there. But, if you look at SDI, the standard was first written in 1985, and here we are today and still making improvements in that.”

On lessons learned from IP-based–facility buildouts: “One of the lessons we’ve learned about [IP projects] was to think about the workflow first and design it second. IP allows much greater flexibility than SDI ever did. And you can forget most of what you’re used to doing with SDI, because IP opens up a whole lot larger and greater thought processes than before. From the infrastructure perspective, IP supports the goal of future expansion, so build it accordingly. Allow it to grow. Don’t underestimate how much fiber you’re going to use. Pull in at least 50% more fiber [than you need immediately] … during the construction phase.”