Legends Behind the Lens: Garrett Brown 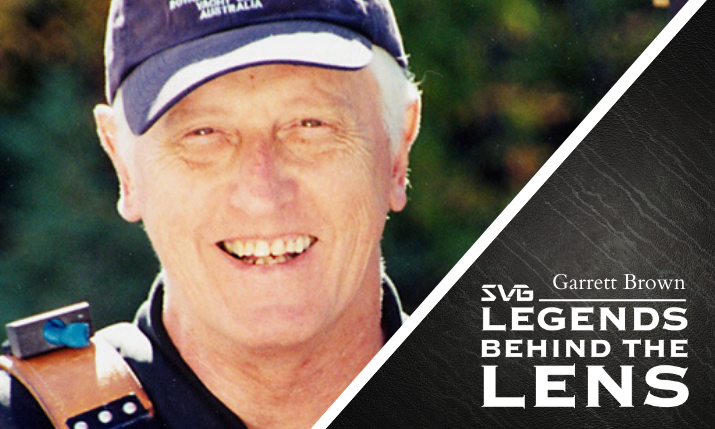 Steadicam. Divecam. Skycam. If you’ve seen a sports event on TV or a movie that features ultra-smooth camera work, the odds are pretty high that the production crew is making use of one of Garrett Brown’s inventions.

Born April 6, 1942, in Long Branch, NJ, Brown revolutionized TV and movie production in the mid 1970s with Steadicam, a camera-mounting system that allowed the camera to seemingly float in front of the cameraperson. Free of the bumps and jitters of human motion, Steadicam opened up an entirely new type of camera shot and changed sports coverage forever.

The original inspiration for the Steadicam was a recognition of what Brown calls the “fundamental absurdity” of an 800-lb. camera dolly (many of Brown’s inventions were fueled by the “Alpha Wave Express” of creativity while asleep at 4 a.m.).

“[An 800-lb. dolly] is so unwieldy and clumsy,” he recalls. “And there was 30 ft. of rail that had to be laid down. So a lot of the things that followed related to the viewpoint [of that absurdity].”

When Brown set about designing the original Steadicam, he had specific goals in mind to replace the cumbersome dolly with a lightweight handheld system to make the camera more inert; find the camera’s center of gravity and isolate the gimble at that spot; support the camera in a way that allowed it to freely move laterally and vertically; and find a way to allow the operator to be able to see what was in the viewfinder without needing to place their eye on the viewfinder in the interest of safety and moving the camera around.

“That was the basis of the patent,” recalls Brown. “Once I made my way to Hollywood [in 1974], it created a sensation.”

By the end of 1975, the unit had become so popular that it was being used simultaneously on three movies: Rocky, Marathon Man, and Bound for Glory. During the next few years, Brown would work on dozens of movies, including The Shining and Return of the Jedi, for which he shot the speeder-bike chase scenes.

“I walked through the real Redwood Forest in a very straight line at less than one frame per second, but, when it was played back, it appeared as if I was moving at 100 mph.” — Garrett Brown

Both Rocky and Marathon Man were a fitting start for a product that would transform sports coverage. “I originally thought of its use in running shots and imagined it being used along the sidelines in sports, chasing athletes all over the world,” says Brown. “But that took years to happen.”

In fact, it was while chatting with Merlin Olson during a project that the idea of sports coverage really took off, literally. “We were discussing how great it would be to be able to get a helicopter down close without the noise and multiple decapitations,” says Brown. The idea for Skycam was born.

“Skycam came along in 1983 and sat on the back burner until 1984 when it shot games galore,” says Brown. “The Orange Bowl that year was one of the best football games shot in decades, thanks to the Skycam.”

In 1985, Skycam made its most famous early appearance at the Live Aid concert in Philadelphia. “Unfortunately, we ran out of dough,” he recalls, “and the original single rig couldn’t keep the factory alive. So it disappeared for a while.”

In 1996, however, it was reborn during NBC’s launch of the XFL, proving that even short-lived leagues can have a long legacy.

Around the same time, Brown also became involved with the Olympic Games, creating Divecam to Swimcam and more. All of those developments transformed coverage, bringing viewers closer than ever to the competition and athletes. More important, they made it easier for broadcasters to give viewers a sense of the speed and power exhibited by athletes around the globe.

One of Brown’s favorite applications occurred at the sculling and rowing events in Beijing when the Skycam unit zipped back and forth above the athletes, providing a view that previously was available only to seagulls.

Today, Brown continues to invent. “I have never been more productive, and I know how to invent things more easily than I used to,” he says. “I love the moving camera, and, when the lens is moving in conjunction with the athletes, it gives the image a wallop. And when we get to 3D, that will be another layer of icing on the cake.”