The league collaborated with Dome Productions and Defacto Entertainment

Having been forced to postpone its 2020 season due to the coronavirus pandemic, the NBA 2K League returns to the virtual hardcourt tonight. Although the action won’t take place in a new Manhattan studio as planned, all 23 teams will be competing online, thanks to a unique remote-production workflow developed by the league and its production partners Defacto Entertainment and Dome Productions. 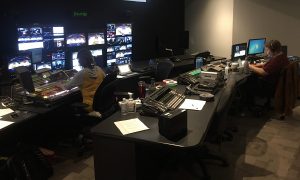 At Dome’s NOC in Toronto, a six-person socially distanced crew — including the technical director and graphics operator here — work in four rooms with no more than two people per room.

“From a production standpoint, we left our offices [in mid March] knowing that we needed to build a strategy and have a solution ready should the league decide to launch the season remotely,” says Matt Arden, head of content and media, NBA 2K League. “We started thinking about it right away, and the team was able to come up with some pretty amazing and innovative solutions in just six weeks or so. I couldn’t be more proud of our team and the insanely hard work they’ve put in to get this done.”

Remote production is nothing new to the NBA 2K League, which deployed at-home workflows for the NBA 2KL Three for All Showdown exhibition tournament last month and the league’s APAC Invitational in January. However, after experiencing firsthand the bandwidth challenges created by producing live broadcasts using the public internet during the Three for All Showdown, Arden was looking for a more robust central production hub and remote-production systems for the launch of the 2020 season.

“The [Three for All Showdown] was a great learning opportunity for us just to see what was happening in the marketplace and what some of the challenges were,” he observes. “We quickly discovered that there was a disparate array of connection issues depending on where you are located geographically. And, with NBA 2K League, you’re talking about 23 teams in 20 states and two countries. So we wanted a solution that was very robust and also would be very plug-and-play.” 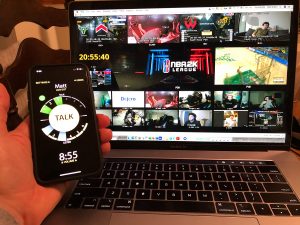 To executive-produce the NBA 2K League broadcasts, Matt Arden uses a multiviewer on his laptop and a Unity cloud-based intercom app on his cellphone at his home in New York.

With that in mind, the league teamed up with Defacto and Dome to create 25 flypacks: one for each of the 23 teams and one each for casters Scott Cole and Jamie “DirK” Diaz Ruiz. These flypacks send live game feeds to Dome Productions’ Network Operations Centre (NOC) at Rogers Centre in Toronto, which serves as the hub for this production.

“From the outset of our transition from a traditional studio broadcast in NYC to our remote-production model, the goal was always to find a middle ground between a typical REMI production and a completely cloud-based solution,” says Defacto Entertainment Director, Production, Adam Poel. “For the scale and flexibility that 2K League requires, a strong technical foundation was an early priority. Through our partnership with Dome, we leveraged the established connectivity of their existing CER [central equipment room] infrastructure at their Toronto facility, while tying in remote crew facilities across North America.”

The Flypacks: Serving the Teams and the Casters at Home

The flypacks — which allow every team to feed a gameplay iso, camera feed, and audio to Dome’s NOC — had to be set up by the teams themselves since the league was unable to send out technicians to install them. The teams were provided a custom manual with photos showing how to set up each kit, and, once the teams received the kits, Dome technicians talked them through the setup on a video call.

“The workflow we have gone with on this project is as streamlined and user-friendly as we could make it without sacrificing quality,” says Dome Productions Mobile Engineering Technician Bryan Bosley. “We had to put together small fly kits that are simple enough for anyone to set up, as we do not have any TV techs onsite with the 25 kits.”

The flypacks comprise a Marshall POV camera, a Decimator MD-HX to capture and crossconvert gameplay, and a mix of Dejero transmitters and Haivision encoders. The league is using TeamSpeak software for audio and comms. The gameplay feed passes through the MD-HX to create an embedded HD-SDI signal, which is sent to Toronto on one of the flypack’s encoders; the POV camera plugs directly into the other encoder. At the NOC, signals are received on Dejero receivers and Haivision decoders.

The Production Hub: Dome’s NOC at the Center of It All
According to Dome Broadcast Engineering Tech Shane Hunt, the company is uniquely positioned for this type of project: its NOC is networked with various international broadcast fiber carriers, such as The Switch, Century Link, AT&T, GTT, LTN, Encompass, Bell, and Rogers. This project also relies heavily on the internet for both incoming and outgoing feeds, which Dome is prepared for with fully redundant diverse internet carriers and redundant network infrastructure.

“We wanted a true brick-and-mortar, fiber-laden control hub for this,” says Arden. “It was really important for us to have a really firm backend to this, and [Dome’s NOC] just happens to be the largest switching hub for live sports and events in Canada. Having that facility as our master control gives us a ton of confidence. It’s also ideally suited for scalability for any remote production, so it provides a ton of options down the road. Since our flypacks have been a bit of an experiment, it has been nice to have this as a concrete, well-proven backend.”

At the NOC, Dome has redundant business-grade internet connections with plenty of bandwidth, but it has little to no control over internet connections and available bandwidth for the remote team locations. Many of the flypacks are deployed out of players’ respective homes with residential internet that is susceptible to congestion at peak times of usage. As a result, Dome is taking advantage of its existing Dejero partnership and Haivision products to improve performance. During a broadcast, Dome’s engineering and NOC teams monitor the incoming-video-feed statistics for any anomalies and make adjustments if necessary.

The outbound-transmission plan is equally ambitious, with a number of on and off broadcast feeds fed to both digital and linear platforms across North America and Europe. Today, it was announced that ESPN2 will be carrying NBA 2K League coverage in the U.S. and Sportsnet will pick it up in Canada. In addition, several RSNs and international partners have signed on to distribute live 2K League games.

Crew and Comms: Practicing Social Distancing While Staying Connected
The multi-pronged production team consists of a small crew at Dome’s NOC following social-distancing guidelines, Poel’s Defacto production team in Vancouver, and the NBA 2K League team (Arden and multiple producer/editors) scattered across the New York area. Leveraging an SRT workflow across the inbound and outbound signals allows the entire crew to stay within 1-2 seconds of latency. 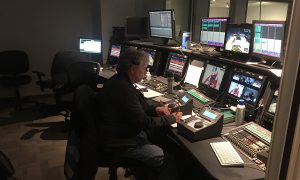 The Toronto NOC houses a total of six people — a technical director, graphics operator, A1 for audio, EVS replay op, assistant director, and engineer — working in four rooms with no more than two people per room.

Dome receives many feeds for each show day, and they are passed over to the Suite One control room. On top of the inbound feeds, Dome is managing in PC video sources, PC audio sources, eight record/four playback channels of EVS, and two channels of ChyronHego Mosaic graphics. The production is using a Unity virtual intercom system to tie in to Dome’s RTS comms system so that the PCR crew use normal key panels.

The NBA 2K League is also using a virtual set, provided by LiveCGI, with internal monitors featuring NDI feeds inserted at the Suite One control room.

“The workflow for our PCR team is very close to what we are accustomed to on a REMI-style show, other than not having a production team sitting beside them,” says Bosley.

Says Chris Mitchell, senior account manager, client solutions, Dome Productions, “Dome Productions has always strived to lead the industry with new technology and innovation. Every new challenge provides us with the opportunity to not only be creative but help redefine the evolving standards of the industry we work within. We’re very proud of the partnerships and technical solutions that have brought such an amazing product to our NBA2K fans.”

Eye on the Future: Sustainable Model Moving Forward
Although the league was forced to come up with the production workflow for this season on an extremely tight timeline, one of Arden’s and Poel’s chief priorities was to create a sustainable workflow that could be used for the long haul. 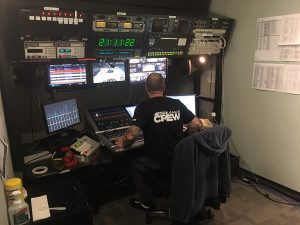 Dome takes the audio embedded on the POV cameras for each caster and passes it through the Calrec Brio audio console.

“The goal,” says Poel, “was always to approach the challenge of converting the 2K League to a remote-production model in a way that wasn’t just a temporary solution but was truly a new paradigm for production that mixed the stability and reliability of a [central control room] with the new workflows that allow remote crew, players, or talent to be integrated as the needs of the production scaled. Many of the production workflows we’re refining and iterating on now will continue to be utilized even after social-distancing restrictions are lifted. While born out of necessity, the learnings we’re actively putting into practice will set a new standard for how both our organizations approach production in the future.”

Although the next-gen technology has been integral to bringing back live NBA 2K League action, Arden acknowledges that the job wouldn’t have been possible without the hard work of his team.

“There is a lot of amazing technology out there right now,” he points out, “but, at the end of the day, I’m most proud of our team for coming up with this [workflow] during incredibly unique and stressful times. We’ve been experimenting with things that are unproven up to this point, and the calm and professionalism and execution by the team has been incredible to watch.”

Week 1 of the 2020 NBA 2K League regular season tips off tonight at 7 p.m. ET. All 23 NBA 2K League teams will participate in regular-season gameplay with at least six weeks of remote gameplay from their respective markets. Matches will air live on ESPN platforms, Sportsnet (Canada), Twitch, and YouTube.