Working from home, the franchise pressed reset on its video workflows to serve fans in new ways

When the NHL truncated its regular season in mid March as a result of the COVID-19 outbreak, not much was expected from the New Jersey Devils. The team sat in last place in the Metropolitan Division with only a handful of games left on the schedule. It would have been particularly easy to roll over, write off the year, and move on to offseason planning. But that’s not how this franchise’s internal video-production and content teams roll. 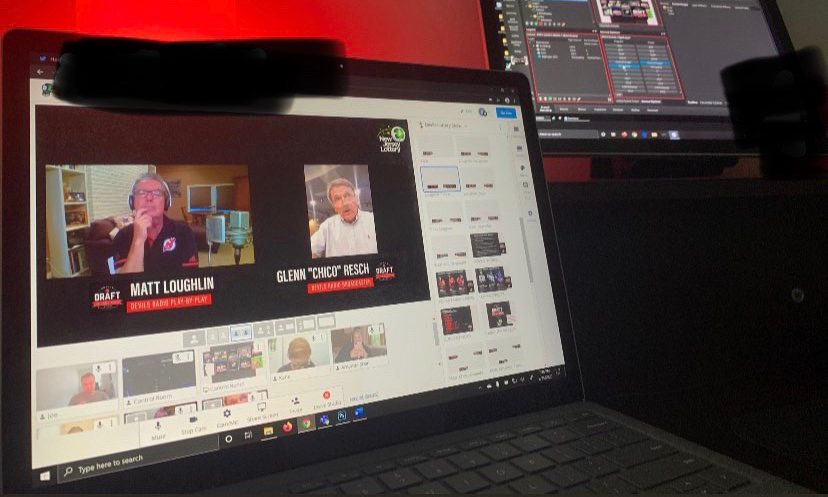 Live video programming for the New Jersey Devils’ digital and social platforms is produced using technology set up in the home of Senior Manager, Scoreboard and Live Production, Joe Kuchie.

The team, which is owned by Harris Blitzer Sports & Entertainment (HBSE), quickly turned around a brand-new content calendar designed to both entertain fans and offer value to corporate partners, all powered by a new work-from-home production model.

“At the Devils, we try to prepare for the unexpected,” says Chris Wescott, manager, content, New Jersey Devils. “In this digital world, we have the ability to go remote pretty much on command. It was relatively easy for us.”

Conveniently, the company had begun researching and planning for a more-remote office workflow for the future. According to Jillian Frechette, SVP, marketing, New Jersey Devils and Newark’s Prudential Center, that work had begun even before the coronavirus appeared on the country’s radar.

The technological onus in setting the franchise up for success fell to Devils Senior Manager, Scoreboard and Live Production, Joe Kuchie and his team. Unable to work from either the club’s new digital content studio or the Prudential Center’s in-venue control room, a shift to an actual “at-home” model needed to happen quickly.

“There have been so many advancements in technology over the last couple of months,” says Kuchie. “Vendors are coming out with new ways to engage with fans, and, while it’s great to have now, when things go into the ‘new normal,’ there’s no reason we won’t be able to use this technology moving forward.”

While the club has turned around a slew of intriguing and engaging video content over the past few months, two pillars of live content have proved praise-worthy: a live show surrounding the NHL Draft Lottery and a series of NHL 20 streams re-creating the live game experience.

‘Anything Can Happen’ on Draft Lottery Night

For a team like the Devils and others across the NHL who wouldn’t be involved in the league’s restart (the puck is now slated to drop on Aug. 1), the announcement of the NFL Draft Lottery on June 26 was the first big hockey moment on the schedule since mid March. It immediately became the focus of the club’s content-creation and sponsor-obligation efforts.

“We have a philosophy at the Devils that we’re big on our hockey moments,” says Frechette. “We want to celebrate our hockey moments; we want to amplify them. [The] Draft Lottery, for a lot of teams, is just another day on the calendar, but, for us, it was a really big deal, and we wanted to set the stage for what we hope to deliver when [the NHL] Draft rolls around in the fall.”

The Devils’ efforts on Draft Lottery night included a 30-minute preshow exclusive for premium fans who are members of the team’s “The Black and Red” club. That preshow offered interviews with famous alums like Martin Brodeur and “Chico” Resch, as well as 2019’s first-overall Draft pick Jack Hughes. At 8 p.m. ET, the show went live across all platforms: Facebook, Twitter, YouTube, and the team’s website and mobile app.

According to HBSE, the show — which was fittingly sponsored by the New Jersey Lottery — garnered more than 1.4 million social impressions and more than 17,000 live viewers across all platforms. An additional 1,000+ viewers took part in an exclusive members-only live pre-event show. All in all, the Devils were tops among all lottery-eligible clubs in social-brand mentions the night of the Lottery, and the production registered an 86% positivity score on HBSE’s social-listening analytics tools.

“In a time of so much uncertainty, to have that certainty with a hockey moment and an event for us was refreshing. It was go time, let’s make the best of it. Joe’s team and our content team worked hand in hand on multiple ideas before settling on a collaborative effort that was going to be unlike anything NHL teams were doing at the time.”

To pull it off, Kuchie and his production team leveraging a live-video infrastructure built specifically for the club’s new work-from-home mandate; a workflow, mind you, that leverages very little of the Devils’ control room at Prudential Center.

The show was produced through StreamYard’s StreamYard Studio product, which allowed Kuchie to have full control over the broadcast center, be able to switch in a live environment, and add custom backgrounds and sponsor branding, all while maintaining open communication with hosts live on-air and guests preparing to join the broadcast.

Hosts Matt Loughlin, Amanda Stein, and Wescott, as well as any guests that appeared on-air, received a private link via StreamYard that ushered them into a virtual studio, where Kuchie could approve their video and audio outputs before placing them in the live show. On the way out, StreamYard also produced custom RTMP links to allow broadcast of the show on all Devils digital and social channels, including Facebook, Twitter, YouTube, the team’s website, and its mobile app.

“It was very convenient for me,” says Kuchie, “because I was managing all the content in real time right in front of me, rather than going to different sources or different inputs or outputs from our room.”

He was able to use his Newark studio’s resources for interactive elements in the broadcast, including a “fan wall” featuring a collage of video screens of fans reacting to the Draft Lottery (powered by Vixi and The Famous Group), trivia, and a Skee-ball–themed competition run via the club’s relationship with Xcite Interactive (which typically powers many of the interactive fall games that appear on the venue’s centerhung videoboard during a game).

Naturally, while Kuchie was doing much of the producing and live TD work from his at-home setup, the show was a production that involved virtually every internal department of the Devils and featured the support of the video team, including Katie Arsenault, Alex Cattano, Ellie Carlson, Greg Cirrone, Doug Gordon, Blaine Sayers, Marc Ciampa, Ben Broder, and Vanessa Van Bergen.

“They had the bravery to try it and the talent to pull it off,” praises Frechette. “But it’s that synergy and those connections that they had as colleagues prior to leaving the building that are quite important.”

More Than Just a (Video) Game

When the NHL season pause took effect, the Devils made a quick transition to a new content plan to accompany its work-from-home workflow. Wescott notes that his team had a fairly robust content calendar set up within 48 hours.

The effort focused on finishing the regularly scheduled Devils season through a series of simulations on EA Sports-produced videogame NHL 20.

It’s a content strategy widely deployed by various teams and regional sports networks to offer live content on social media during the pandemic, but the Devils went above and beyond to take this viewing experience to the next level.

Wescott points out that the team wanted to do more than just stream a videogame feed to Twitch. Its goal was to re-create the entire in-arena experience from the play on the ice to the videoboard interstitials and other points of direct engagement with fans.

So, instead of going live, Wescott simulated the game on a PlayStation 4, recording the video on the system’s internal server. From there, the full video file was sent off for editing. Kuchie and his team sliced and diced the game to include intros, sponsor elements, and interactive moments with fans (including a T-shirt toss, with fans encouraged to share videos of themselves “catching a t-shirt”; selected fans received shirts compliments of the team). The completed game file was also sent to Loughlin, the team’s radio play-by-play announcer. After watching the video, he recorded his commentary to be layered on top of the game.

By the end of the week-long process, the entire project was polished up, and, at the regularly scheduled game time, the video was sent through OBS (Open Broadcaster Software) and Wowza Streaming Engine to push the content to multiple live environments, including YouTube, Twitch, Facebook, Twitter, the team’s website (njd.tv), and the team’s mobile app. 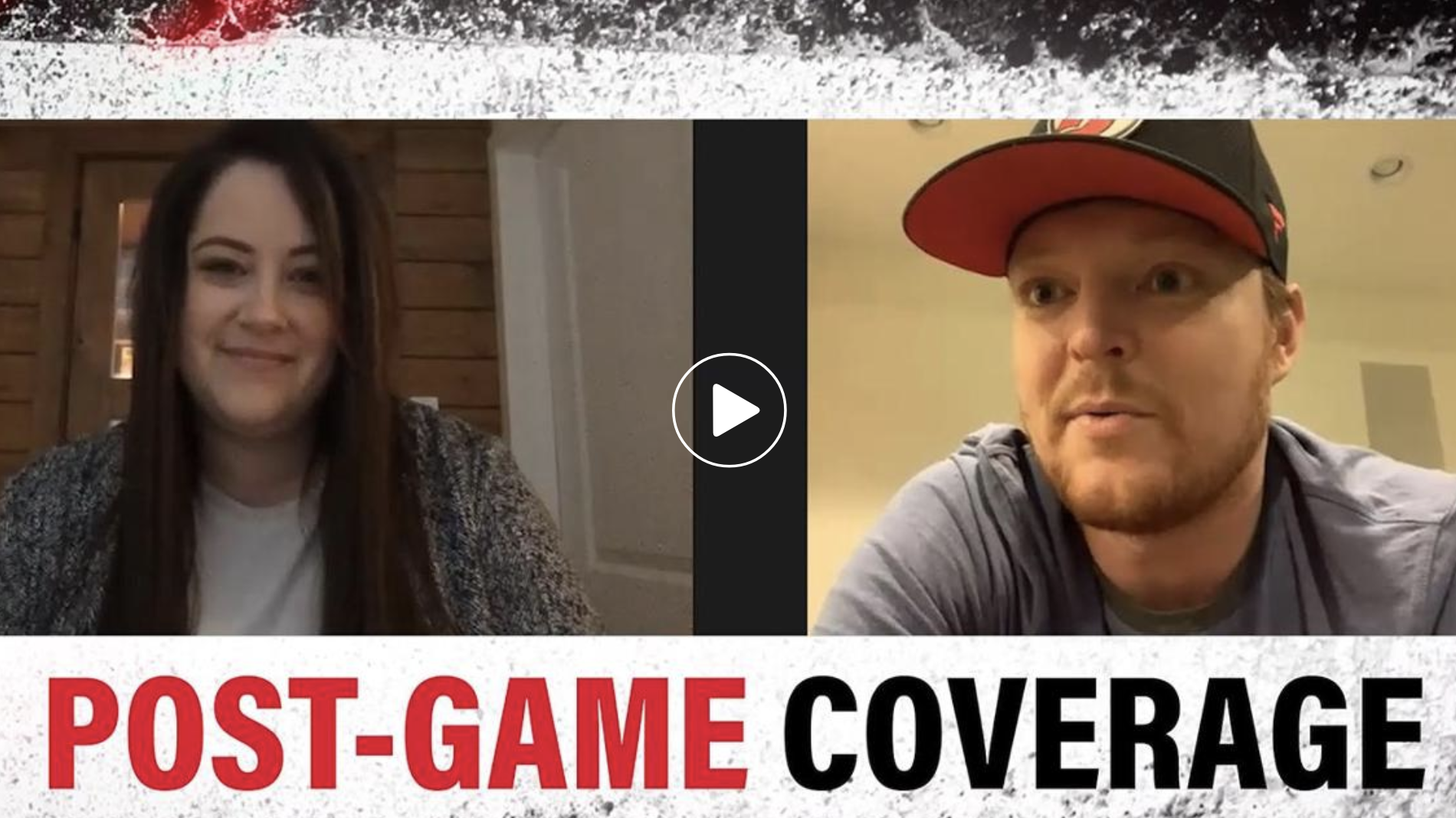 The streams were also supported by coverage across the team’s social channels and website, which treated the streams as if they were real games and offered Zoom-based postgame interviews with players who “performed well” in the simulations. One particularly popular interview was with goalie Cory Schneider following a win in which he logged stats possible only in a videogame: a whopping 98 saves.

At the completion of the regular season, those game streams had notched 40,000-60,000 live views across the team’s various social-media platforms alone. The most successful was a game vs. the Philadelphia Flyers that attracted more than 60,000 live viewers and tacked on nearly 2,000 more who watched post-event in VOD.

Once the season was complete, the series was rescheduled as a weekly Saturday show and repackaged to re-create classic games from the Devils’ past or to pit decades’ all-time teams (for example, the 1990s’ Devils vs. the 2010s’ Devils. Fans were offered the chance to vote on the matchups they wanted to see.

The now weekly stream has not only become popular appointment viewing for fans but has become valuable real estate for honoring sponsor obligations that might have been lost with the cancellation of the regular season. Investors Bank is the titling sponsor for the series, and the streams feature breaks similar to ones that fans might see on the videoboard at a game, including the Investors Bank Coin Shuffle and the Delta Dental Floss Cam.

“Rather than take preexisting B-roll that we previously had from past games,” says Kuchie, “we asked fans to actually send in their flossing, and we put a compilation together for the stream. It’s the little things like that, where we constantly have brainstorm meetings just to say, “Okay, what’s next? What’s the next thing that we’re going to do to really engage our fans?? It’s not just watching a videogame stream; we want to make it feel like some experience that they would be missing out on.”

What’s the ‘New Normal’?
As for the overall impact going forward, virtually everyone in sports is looking forward to the day when fans can be welcomed back to events with zero restrictions. For many on the Devils’ internal staff, though, even that day won’t mean the end of many of the successful projects taken on in the digital world as a result of this pandemic.

“Content doesn’t have a singular must-work-from-here location,” notes Westcott. “We’ve put on a live show from our living rooms, involving multiple assets, multiple departments, fan interaction, exclusivity to our biggest fans, our season-ticket holders. I think, for us moving forward, there are no excuses in terms of what we can pull off from afar. If news happens and we don’t have direct access to our studio, we have the ability to go remote at least in some way with unique and innovative coverage.”

Adds Frechette, “I don’t think there’s that much that we’re going to walk away from that we’ve experimented with during this pause. I think, when fans have the ability to customize their content, it’s really well-received, and they love it. I think that’s just an extra layer that we’ll keep driving with even when our players return to the building and games return to the Prudential Center.”