The MLS Is Back Tournament is in full swing, with matches having started on July 8 and running through the Aug. 11 Final, all at the ESPN Wide World of Sports Complex at the Walt Disney World Resort in Orlando. What sets this series apart — and marking a milestone for pro soccer in general — is the extensive amount of audio that ESPN is collecting. With more than 30 microphones across three pitches, wireless shotguns on cameras, and Q5X remote-controlled transmitters buried in the fields just under the nap of the grass, this string of games is shaping up to be the most miked-up soccer series ever on television.

According to ESPN Remote Operations Specialist Kevin Cleary, who is supervising the audio, this level of sound capture is due to ESPN’s opting not to add artificial crowd noise to the broadcast, and the empty stands around the pitches allow clean sound capture from virtually any point on the pitch. The relative quiet around the fields allows vast amounts of sound to be picked up without players’ being miked, which isn’t allowed by MLS and, in any event, would be precluded by COVID-19 protocols, which don’t allow A2s to interact directly with players, coaches, or officials. 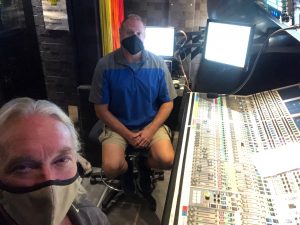 “When I was brought on this project in May, the decision had already been made that we were not going to pump in [artificial] crowd noise,” says Cleary. “As a result, we’re able to hear an enormous amount of interaction between players and teams and officials on the field, more than we’ve ever heard for soccer before. We’re constantly picking up conversations between players and coaches and officials. If you’re a fan of soccer, you’ve never heard it like this. If you’re relatively new to it, you’re blown away by the level of interaction you can hear without the sound of crowds covering that up.”

In addition to the mics around and on the field, live coach interviews are being conducted through coaches’ headsets with announcers in ESPN’s facility in Bristol, CT, while the coaches are on the hydration breaks mandated by the league because of the area’s high heat and humidity.

ESPN is using a modified REMI (remote-integration) model for the MLS Is Back Tournament, with the production teams onsite responsible for creating a line-cut with replays, virtual graphics, and basic audio mixes. The teams are housed in F&F Productions’ GTX-19A/GTX-17 B mobile units for the duration of the tournament, with backup by GTX 16 A/B in case weather delays force simultaneous matches.

A1s Andy Bartley and Florian Brown are mixing audio onsite. The feeds are sent to Bristol and passed on to the other broadcasters, which add live-call announcers and other elements from their home facilities.

The clean feed is backhauled to the production facility of each game’s broadcaster: ESPN is host broadcaster for all 54 match broadcasts, feeding Fox Sports in Los Angeles and Univision in Miami for the U.S. and TSN in Toronto. Line graphics, promotional items, preproduced features, studio segments, and other content (including, on Fox and Univision, artificial crowd sounds) are integrated into the telecasts prior to distribution.

Fox Sports announced July 10 that its broadcast coverage of the MLS Is Back Tournament will feature artificial crowd noise, as did Univision/TUDN. All of Fox’s televised games of the quarantined tournament at the ESPN Wide World of Sports complex will feature artificial crowd noise, which fans can opt out of when watching online or via the Fox Sports app.

Cleary likes the au naturel approach to soccer sound: “I was seriously shocked at how genuine and true to the sport the sound we’re getting is. It’s making a soccer fan out of me.” Many viewers apparently agree.