Collaboration yields a world feed for national networks and RSNs

The NBA Summer League has historically been a competition where NBA teams can try out different players and the league can try out different broadcast and digital technologies and workflows. It also provided a blueprint for what is happening this summer: the NBA season has resumed at the Wide World of Sports (WWoS) facility in Orlando, and the NBA, ESPN, Turner Sports, and the regional sports networks have collaborated on a massive 200,000-sq.-ft. production facility and completely new approaches to NBA production.

With 35 robotic cameras across the WWoS campus, the league can cover the action safely.

“Some days, I wake up in Orlando and think I am at the Summer League,” says Steve Hellmuth, EVP, media operations and rechnology, NBA Entertainment. “The Summer League was where we tested the railcam with ESPN and Turner, and now it is here, and it has been spectacular.”

TV-production innovation is what the NAB restart has been all about. The goal is to produce a top-quality product with a minimal team to minimize the risk of COVID-19 infections and spread. Collaboration among hundreds of people onsite has been the difference, and Hellmuth says the work done with  Eddie Okuno, senior remote production operations specialist, ESPN, and Chris Brown, VP, sports production technology, Turner Sports, is indicative of the collaboration.

“At the Summer League,” says Hellmuth, “we experimented with a courtside robotic camera, and Eddie and Chris talked it through for WWoS and came up with the idea for a robotic camera on an arm on the side of the backboard that looks through the glass and can go above the glass.” 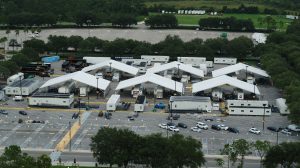 He notes a “frictionless” interview position as another innovation being deployed in the NBA bubble. The goal was to figure out a way for players to simply walk off the court and up to a camera and be interviewed without the need for in-person human interaction.

“The engineers at NEP worked on the idea,” Hellmuth explains. “The player walks up and [and is given] a return of the actual video and audio of the announcer in the studio via the NBA HSAN. The player can see the talent, listen to the question, and then look into the camera to answer it.”

Although it sounds simple in concept, Hellmuth says, it required a lot of rehearsal so that the audio mixer can raise and lower the appropriate audio channel. Mounted on the camera is a shotgun mic so the player doesn’t have to touch anything. There is also no need to put on a headset or IFB. NBA Broadcasting lead Paul Benedict is in the green zone with the players and has been working directly on the implementation. 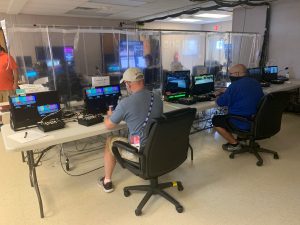 The robotics control room at the NBA Production Center

NBA Entertainment has installed 35 robotic cameras across the Wide World of Sports campus and operates a robotic farm where all of those cameras are controlled. The cameras are used to cover everything from interviews at the practice facilities (again, frictionless) as well as capturing practices.

“The coaches let us know when the practices are open,” says Hellmuth. “We also have to let them easily see when the cameras are on. If the camera’s on and audio is working, there is a green light; if the light is red, the camera is completely shut down. We also turn the camera away from the court.”

The biggest challenge, he notes, is that the NBA’s technical operations center in Secaucus, NJ, was not designed to support the needs of 22 regional sports networks at once.

The required social distancing increases the challenge. “We’re doing extensive testing for everyone in Secaucus and keeping people in their work cells so they don’t wander,” Hellmuth adds.

Key to the entire effort at WWoS is creation of a world feed. With every game designated RSN only, national network plus RSN, or national network exclusive, it made sense to make the signals available to the RSNs remotely and have ESPN and Turner crews produce the games. 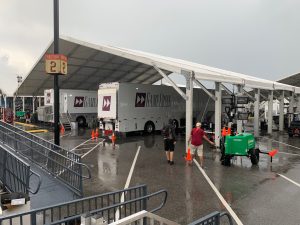 Canopies over the trucks in the compound not only protect from the elements but also allow air-conditioning to be more efficient by lowering the temperature inside.

“The RSNs are also busy restarting baseball and hockey as well,” Hellmuth points out. “We’ve been fortunate that we have had regular communication with Jon Slobotkin [SVP, content and live programming, NBC Sports Regional Networks] and Mike Connelly [SVP/EP, Fox Sports Regional Networks]. And Howie Singer, director for MSG Networks, is also onsite and understands exactly what the RSNs need. He has gone out of his way to make sure they get everything, from pregame arrivals to scenic and warm-ups.”

Hellmuth played a big part in enhancing the audio by placing more than 30 microphones in the floor. He has experimented with putting microphones in the hardwood in the past, but the green site at the WWoS provided the opportunity to do it properly.

“The court provides a lot of unique sounds,” notes Hellmuth. “I gave [mixer] Dave Grundtvig a call and talked to him about it. He’ll give me credit for initiating the thing, but he and NBA Technical Manager Alex Berman really did it.”

With the mic plan in place, Hellmuth says, the A1s in all the trucks worked hard to figure out how best to mix the audio. 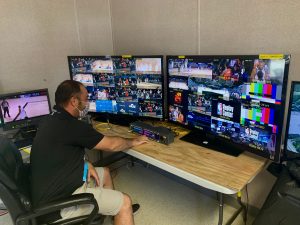 “The A1s for Turner and ESPN worked with each other and us to arrive at what a proper mix should sound like off what is basically a brand-new sound stage,” he says. “It was a lot of trial and error.”

The scrimmages prior to resumption of regular-season games made all the difference to Hellmuth and the team. “We needed to balance all of the elements, like the brightness of the LED boards, the lighting,” he explains. “That’s really what we have been doing for the past month.”

He gives a shout-out to NEP and Evertz for operation of a 545×545 Evertz Magnum router that plays a critical role in robotic-camera control. NBA Senior Technical Managers Dave Barry and Nik Georgiev extended the Magnum control system and integrated the routing switcher in Orlando with the Evertz routing system in Secaucus.

“The routers are all talking to each other, and we can route the RSNs anything they want,” Hellmuth says. “Dan Grainge [president, NEP U.S. Specialty Capture] has been amazing with the robotics and railcam. We kept improving the railcam on the fly during the scrimmages, and now its operation is smooth and seamless.”

“We listen, watch, and learn and push feedback as we continue to try to improve,” he says. “And we will keep trying to improve right up until the Finals. There’s no reason not to improve until the NBA crowns a champion in October.”