It has been an eventful two weeks for NBC Sports Group’s production team for Notre Dame football, kicking off the Fighting Irish season. After producing the team’s opener against Duke remotely for the first time from NBC’s Broadcast Center in Stamford, CT, NBC partnered with Fighting Irish Media (FIM) and Notre Dame Studios (NDS) to produce the Week 2 home game against South Florida out of the on-campus control room in South Bend.

“Regardless of where we are, I just feel so lucky to be able to be covering football right now,” says NBC Sports Coordinating Producer Rob Hyland. “If you asked me back in June if I thought we’d be covering football this fall, I thought there was no chance. The very fact that we’re covering an incredible game at a storied venue, I feel really fortunate.”

Week 1: Back Home in Stamford 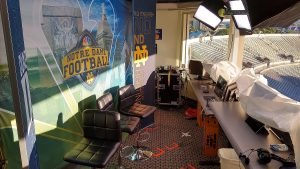 During Notre Dame’s opener on Sept. 12, NBC backhauled roughly 20 camera feeds and audio from Notre Dame Stadium to Stamford, where Hyland and his team produced the broadcast. Hyland, director Pierre Moossa, and key members of the team were located in a mobile unit that was pulled up to the Stamford facility, while several crew members — including graphics and scorebug operators and the halftime-show producer — worked from locations inside the building.

“Everyone was socially distanced, and I’ll admit it was hard,” says Hyland, “but it worked out really well.”

Week 2: On Campus in South Bend 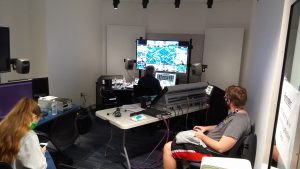 Notre Dame students are an essential part of the NBC Sports’ coverage of Fighting Irish football.

The Peacock’s Notre Dame production team found itself in unfamiliar territory once again last Saturday, taking over Production Control Room 2 inside the Martin Media Center to produce the second game of the season. NBC traveled five crew members — including Hyland, Moossa, the associate director, and the replay producer — plus talent to South Bend. The remaining NBC crew – including graphics ops, the scorebug, and the SMT 1st & Ten Line — were in Stamford. 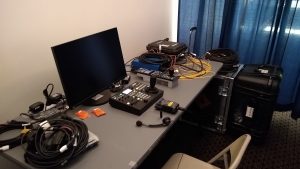 “I think we used just about every bit of equipment we have to get this show done,” says Rinehart. “But it wouldn’t have happened without the efforts of Mike Sill and Shawn DeWeerd of our engineering staff.” 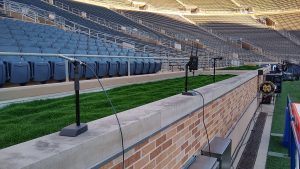 Microphone management on the field was aided by Notre Dame students.

FIM and NDS have produced the Blue–Gold game for NBC and many Notre Dame hockey games, but this was the first time they have partnered with the broadcaster for an in-season Notre Dame football game.

“The Notre Dame Studios team turned on a dime to deliver all of the broadcast needs from a facility, equipment, and engineering perspective,” Rob Kelly, senior associate athletic director, media and brand, and Fighting Irish Media lead, told NDWorks. “They set the stage —literally and figuratively — for the FIM team to partner with the NBC broadcast crew to get the game out to millions of viewers. We take it for granted sometimes, but the fruit of the university value of teamwork was on full display this weekend.”

Looking Ahead: 1080p HDR Returns Along With COVID-19 challenges

When Notre Dame’s slate of ACC matchups kicks off at home against Florida State on Oct. 10, NBC’s team plans to be back in the familiar confines of NEP ND6 mobile unit (its usual 1080p HDR truck, which was working NBC’s U.S. Open show at Winged Foot last weekend). With ND6 returning, NBC will produce all remaining Irish home games in 1080p HDR  and Dolby Atmos surround sound, as it has done since 2018 (telecasts have been upconverted to 4K HDR on DirecTV and Comcast). 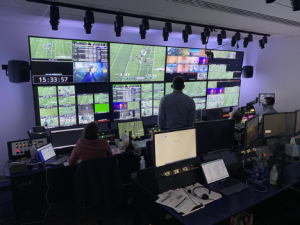 NBC plans to deploy roughly 20 total cameras for its game coverage this year, including a SkyCam system, three super-slo-mos (two at the low-end-zone position, one at a reverse 50-yard line), POVs in the tunnels, a jib, a sideline cart, and an aerial shot. Hyland says that NBC’s camera-coverage philosophy has not been dramatically altered by increased COVID-19 health protocols, with the exception of handheld-camera operators.

“The sideline area for each team is much wider, so there is less access. Your handheld [operator] can’t walk behind the bench and plug back in as the offense is moving a certain direction. He or she has to unplug, then walk through the stands, and then replug. Everything’s just a little clunkier, but we’ve figured out how to get things done.”

Audio has also been a greater challenge without parabolic microphones on the field. “Our parab mics are in the stands now, so that has changed things a bit,” says Hyland. “I think our audio team has done a great job of picking up sound with what we have, but it’s not quite as intimate as we’re used to from a sound perspective.”

As many other production leaders have lamented, the lack of face-to-face communication is perhaps the biggest challenge. Instead of in-person camera meetings with 60-80 members of the production and engineering teams before each Saturday telecast, such meetings must now be done virtually – as are all production meetings with the coaches and players.

“The process of producing and communicating is certainly more of a challenge,” Hyland explains. “You can’t just walk into the tape area and talk to the replay producer and tell them to build a replay package; you have to either email that individual or jump on a [Microsoft] Teams call. Everything is a little bit more of a challenge than it was a year ago, but we’re all adjusting, and I think the entire crew feel really lucky just to be doing football right now.”