The extended experience blurs line between physical and virtual worlds

The most surreal League of Legends esports season in the game’s 10-year history comes to a close this Saturday when Damwon Gaming takes on Suning in the 2020 League of Legends World Championship Final. Although the majority of the season was relegated to online competition due to the pandemic, LoL Worlds 2020 has taken place in person in Shanghai and was broadcast live over the last few weeks, offering a state-of-the-art “extended reality” (XR) experience created by Riot Games, POSSIBLE, and Lux Machina that merges the physical and virtual worlds.

“[XR] lets us do this in a way where we can create this dynamic and interesting environment and produce something that is unlike any other live event,” Nick Troop, executive producer, Worlds 2020, said. “When we’ve hosted events in stadiums and arenas all over the world, there’s this moment of being present. When people walk into the building, they know they’re at Worlds. We wanted to create that exact same sensation this year, just in a different way.” 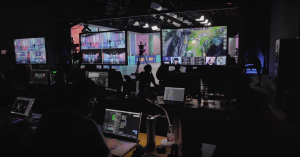 Having released Lol’s Elder Dragon character virtually via AR inside Beijing’s Bird’s Nest stadium in 2017, 2018, and 2019, Riot has upped the ante for its use of mixed reality each year. That has continued with Worlds 2020 this month with the XR stage in Shanghai, which Riot calls the most elaborate mixed-reality stage in the world.

Inside the Worlds 2020 Stage: Blazing the XR Trail for Live Events 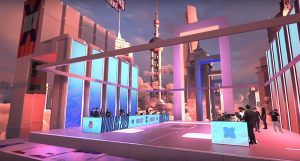 The studio features LED screens surrounding the two competing teams and uses AR to create a virtual world around the stage.

The studio features a myriad LED screens surrounding the two competing teams and uses augmented reality to create a 360-degree virtual world for live competitions. The production relies on an ultra-advanced network environment and hardware system developed by Lux Machina that renders images in real time at a 32K resolution and 60 fps. The 2020 League of Legends Esports World Championship is the first-ever live multicamera production using this technology.

Deploying more than 40 technicians and artists, Riot Games has assembled one of the largest XR teams in the world. The broadcasts are co-produced and art-directed by POSSIBLE Productions, which has used AR and XR to help bring MTV VMAs, Super Bowl halftime shows, and the 2018 and 2019 LoL World Championships to life.

The screens integrated into the stage render at a whopping 32K resolution, and all the primary cameras are tracked so that data is mapped to the LED screens on stage. In addition to the LEDs, Riot and POSSIBLE use AR to create an extended 360 environment surrounding the stage.

“We scenically extend it with augmented reality to make it look like the set goes on forever,” said Michael Figge, co-founder/creative director, POSSIBLE. “So sometimes you’ll see a camera person aiming their camera into the ground or aiming it back towards where our technical front of house is. And that’s because there’s actually a 360 world that’s built out around the stage where, in any direction you point your camera, there’s something to be shot.” 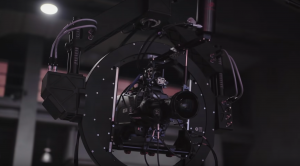 All the primary cameras are tracked so that data is mapped to the LED screens on stage.

The Riot Games production team has access to two projected camera perspectives at any given moment, allowing them to cut between multiple shots within the virtual environment as they would in a real-world show.

“What it means for the audience at home is, this is the same kind of show that they’ve always been able to enjoy,” said Troop, “just done in an exciting new medium and in a way that really brings Worlds to life.”

In addition, the XR environment allows the production team to integrate elements of the show in new ways. 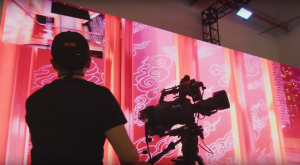 The Riot Games production team has access to two projected camera perspectives at any given moment.

“As we thought about how to deploy the XR environment within the context of our show,” he added, “it became clear that we could integrate pieces of what’s happening within the competition in a way that has historically been a little bit less successful. Replays and other things keep the audience in the game when something interesting may be happening within the environment and actually have both things happen at once.”

Each year, Worlds travels to a new locale and embraces the gaming culture in that destination. However, given the very unusual circumstances for this year’s edition, Riot elected to emphasize the global reach of LoL and use the XR environment to showcase a variety of locations.

“A really interesting thing about Worlds is that it’s known as a touring competition,” said Figge. “The mixed-reality and XR stage allows us to bring those locations to us. We wanted to give some foundational basis so that the players could actually feel the changes as we travel through different cities. Then we also extend that experience for an audience to see that we can do things that wouldn’t even be possible [in a real-world environment].”

The Final: A Live Audience at Pudong Football Stadium 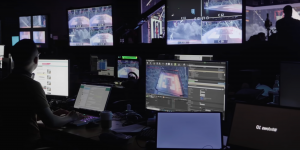 The jib and other cameras are fully integrated with the XR system.

Tomorrow, the Worlds 2020 Final hits Shanghai Pudong Soccer Stadium with a socially distanced crowd of 6,000+ inside the venue and millions more watching online, making it the largest in-person esports event since the pandemic began. With Worlds averaging more than 1 million concurrent viewers heading into the Final, Riot expects viewership numbers to break 2019’s record 21.8 million average-minute audience (AMA) and 44 million concurrent viewers. The action kicks off with the Opening Ceremony at 5 a.m. ET on Oct. 31 on LoLEsports.com, Twitch, and YouTube.

“Coming into Worlds 2020, it’s a decade of competitive League of Legends,” Troop pointed out. “It’s an incredible amount of legacy that we needed to honor. We’re extraordinarily blessed to have a passionate fan base that has enough trust in us to be good stewards of the sport.”

Stay tuned to SVG for a look inside Riot Games’ production workflows for the LoL Worlds 2020 Final broadcast after this weekend’s event.