If you’re looking for a history-making moment in sports production, look no further than this weekend’s The Players Championship from TPC Sawgrass in Ponte Vedra Beach, FL. It’s shaping up to be the largest golf production ever for a single weekend event.

“This will be the most coverage of any golf tournament ever, and, with 154 players, we will have 52 groups,” says Mike Raimondo, senior director, media asset management and broadcast innovation, PGA TOUR, noting that 120 cameras will be on the course to cover the groups. “We scrambled a little bit to make sure that we had everything covered and all the technical resources, but we didn’t cut back on any of that kind of stuff. We just had to tweak our hardware a little bit to make that work.” 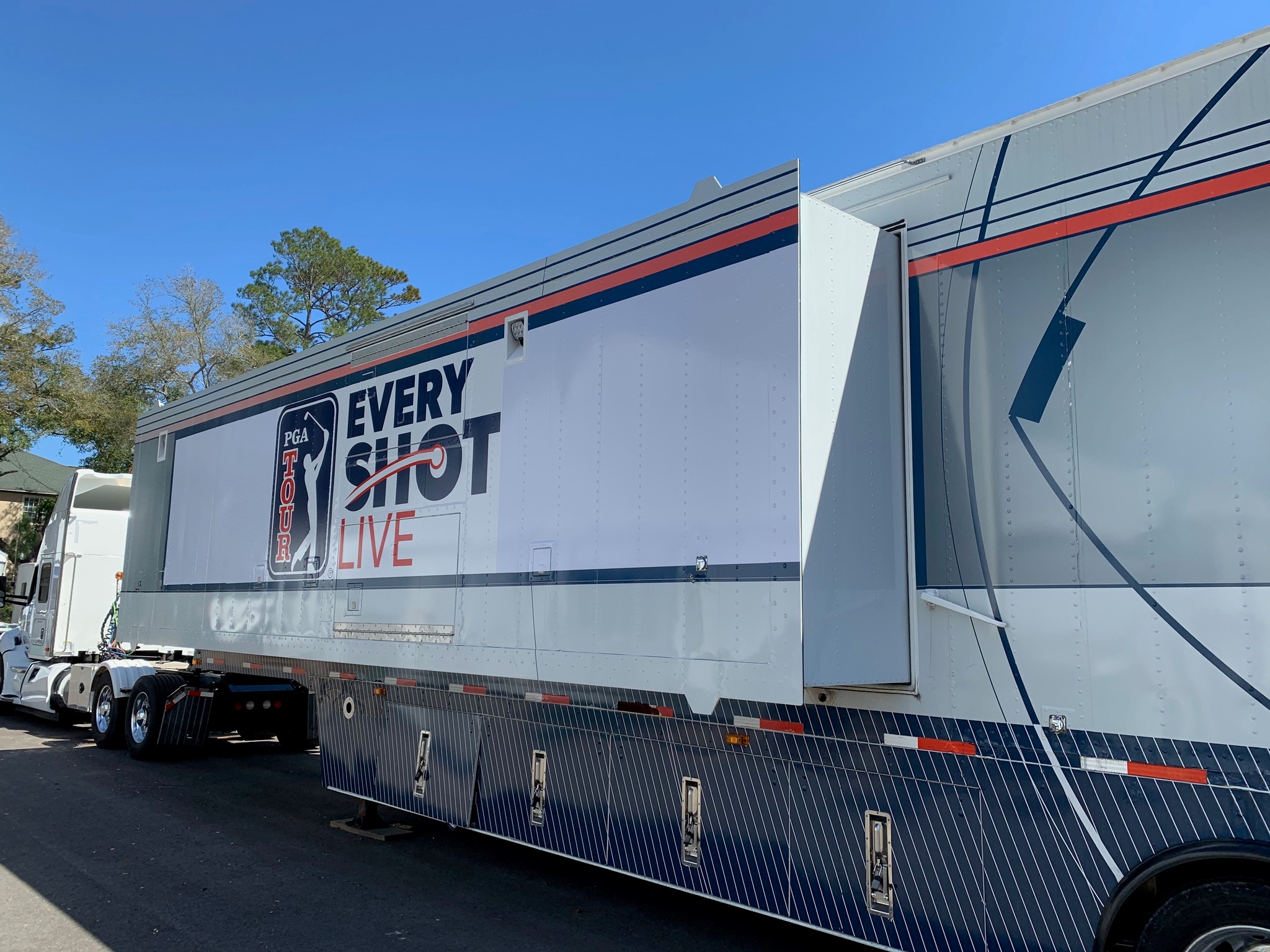 PGA TOUR Entertainment’s Every Shot Live will be produced in the compound at TPC Sawgrass but most of the production will be done in the UK.

PGA TOUR Entertainment will show every shot live (approximately 750 hours). Layer in 240 hours of additional content, and NBC Sports and Golf Channel will have wall-to-wall coverage, a cornucopia of more than 1,000 hours of live coverage.

“From a live perspective, we are back to normal as far as staffing, and we didn’t cut any corners,” says Greg Hopfe, VP/executive producer, PGA TOUR Entertainment. “We have spread people out more to make sure people are safe.”

From a content perspective, says Dave Dukes, senior director, technical operations, PGA TOUR Entertainment, the viewer will have plenty to choose from. “It’s full on, and we will obviously be able to do it for more than the one day we had last year.”

The production of Every Shot Live begins in NEP Supershooter CBS B, C, and D units in the compound, but it extends thousands of miles away. As was done last year, each group will be produced by a team of Hawk-Eye operators located at Hawk-Eye headquarters in Basingstoke, UK.

According to Dukes, the Hawk-Eye interface allows the operator to simply hit a button to switch all the camera feeds from one hole to the next. Every hole has a minimum of three static cameras available to the production teams, in addition to the camera feeds that NBC and Golf Channel use for coverage. As was done last year, those offsite professionals will be looking at proxies of the high-resolution material that never leaves the TPC Sawgrass compound. 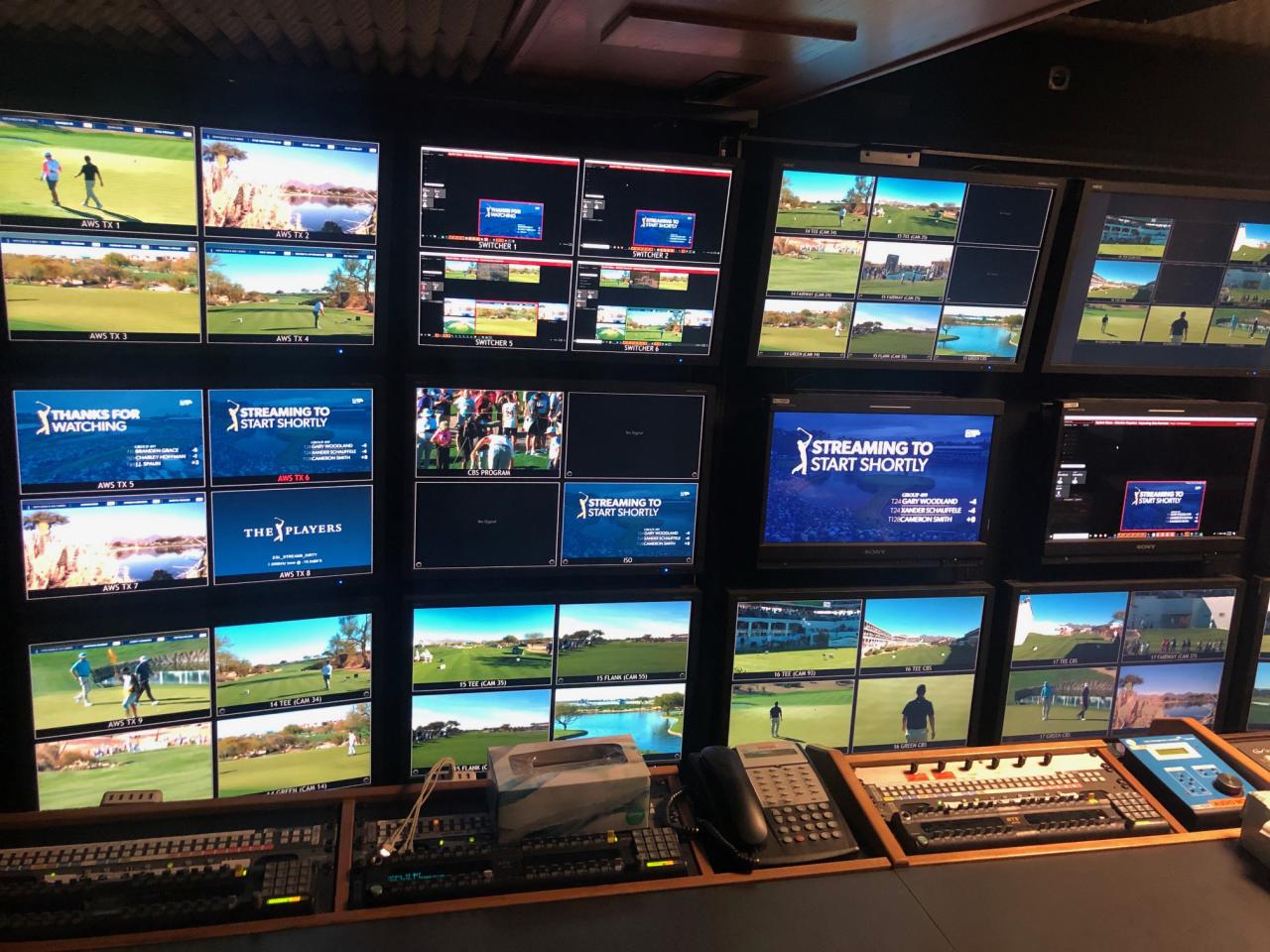 The front-bench area in the compound where Every Shot Live will be produced.

Shotlink data was also incorporated with each feed, along with hole flyovers and trace.

“On course, the live-camera and audio guys work the same as last year, but the entire production is done offsite,” says Raimondo. “The only people onsite will be the technical people who make sure the equipment is up, running, and connected properly.”

One step taken this year to lessen the number of people onsite is that all nine Trackman operators who were onsite last year will operate out of Trackman headquarters in Phoenix. Both the Hawk-Eye and Trackman teams will be tied into the compound via circuits from The Switch, which will be tied into the D unit (three video shaders will also be in the D unit).

“On the transmission side, every single piece of Every Shot Live goes straight into AWS,” says Raimondo. “There are 52 streams into AWS Media Connect, and, from there, it gets distributed domestically and internationally.

“Last year,” he continues, “we just did 24 streams for 24 groups in the morning, and then the same streams would be used for the afternoon groups. But there were too many close calls from an overlap standpoint, and, in 2019, 11 groups overlapped. We kind of lucked out last year and didn’t want to take the chance this year. Now we have a dedicated stream per group.”

Domestically, those streams will be available via NBC Sports Gold. Seven international-rights partners are taking either a handful or all of the streams.

Another improvement over last year is that bandwidth has been reduced because all the streams go to AWS rather than multiple locations.

Adds Dukes, “On the international side, using AWS allows us a lot of flexibility to service our international partners in various ways. Some won’t take all 52 streams, and the nice thing about having all of it in Media Connect is that we can streamline the process of delivering individual streams to partners.”

According to Raimondo, partners that use AWS Media Connect can simply be given access by PGA TOUR Entertainment and can take what they need.

“If they want something in a specific format,” he explains, “we can spin it off and get them what they need. And then there are others who don’t have Media Connect, and we basically are their CDN spun up in an AWS cloud. They put the URLs on their website or app, and the flexibility seems to be endless. No matter what our partners asked for, we can accommodate it.”

The efforts this week enable PGA TOUR Entertainment to continue to add more value to the rights by making it easier for international-rights holders to give golf fans in their country the content they want most.

“They ask for specific players or groups,” says Raimondo, “and we are going to start seeing more localizing of content.”

AWS is also able to bring more efficiency to non-live workflows for highlights and speed rounds. “We send the streams through our AI engine,” Raimondo explains, “and WSC Sports automatically creates all of the highlights for us as it clips every shot and distributes them to our platform. That allows us to create a speed round for each golfer as soon as their round is over. By the end of Thursday, we will basically have 154 speed rounds, and our international partners have asked for those as well.” 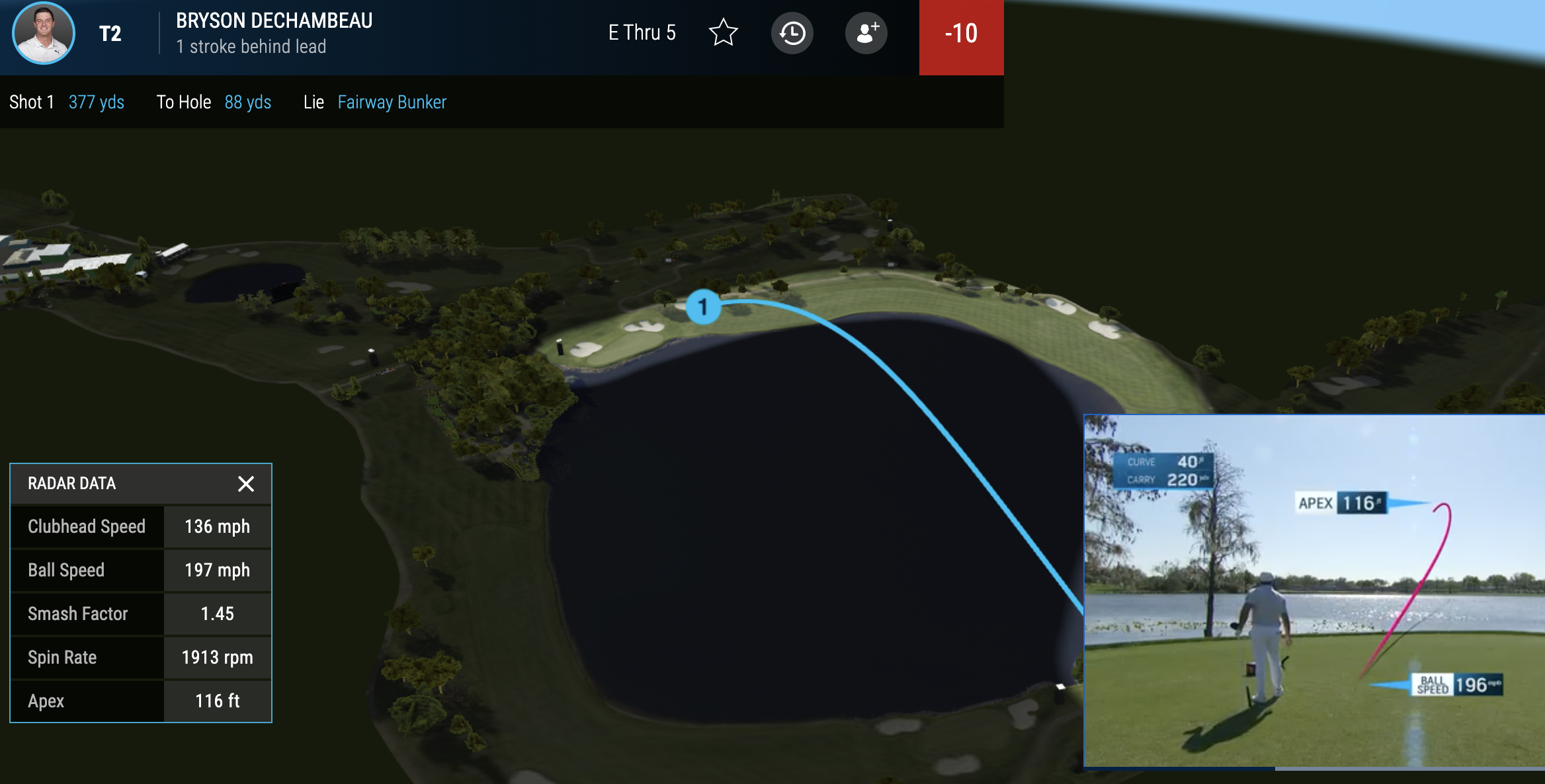 The PGA TOURCast platform is where all the innovation comes together: video clips of each shot are assembled with a graphical representation of each hole and 3D trails of each shot. The first step is to choose a hole, which brings up a 3D representation of it, and the user can fly around it virtually. A player is selected via dropdown menu listing each of the shots. When the user clicks on a shot icon, a video window pops up to show the shot, and tracking data indicates where the shot went on the 3D graphical representation of the hole. Club-head speed, ball speed, smash factor, spin rate, and apex are also displayed.

“We ingest every stream, the AI cuts it, and then we layer it into our TOURCast 3D product,” says Eric Hanson, senior director, digital product development, PGA TOUR. “The cool thing about it is, there’s no people running it: it’s all automated on the backend. By the end of the tournament, we will have over 32,000 clips automatically put into TOURCast.”

Hanson notes that the clips are probably the biggest source of content consumption on PGATour.com and the app.

“There are guys at the bottom of the leaderboard who get a decent amount of video views,” he explains. “There’s a long-tail effect because there are so many players [in whom interest may be small] but, if you combine that interest, you get a large amount of interest across the fan base.”

Hanson cites Norway’s Victor Hovland as a prime example of the kind of player whose popularity back home justifies all the efforts around personalization and localization.

“They may be small names on the PGA TOUR, but they are really big names in their home country,” Hanson notes. “People follow them shot by shot and will consume as much content as we give them. It’s great for us because they are super-dedicated.”

More than ever, technology is transforming PGA TOUR Entertainment, opening up new ways for rightsholders to get incremental value out of those rights, new ways for its own teams to repurpose content easily, and much more.

“Not only do we have live content,” says Raimondo, “but we have instant access to all content, so every one of our content creators can go into the system and clip anything they want.”

For a sport that traditionally has been just about the hardest to broadcast because of all the simultaneous play, nirvana, for golf fans in particular, has arrived.

“That will be used for the featured groups and will lessen the amount of people at the course,” says Hopfe. “That is an example of how we thought about things for social distancing.”

Also produced will be a Shotlink data channel, which layers in performance data about how a player typically does in a given situation, and a Launch Pad channel from the 14th hole exclusive to DirecTV.

“[The former is] an instruction-based channel where we use super-slo-mo cameras and a crane with an SMT graphics grid so our analysts can break down the swing,” says Hopfe. “It’s very much for the instructional geek.”

PGA TOUR Entertainment will also create a 22-hour world feed out of its St. Augustine facility.

“We do that every week for the tour,” says Hopfe. “The team will bring in the NBC feed and add over 100 shots a day during the commercial breaks. We have 10 NBC cameras coming into the building, so we can record what we will show when NBC goes to break. We can replay a significant number of shots to fill the breaks.”

The efforts at The Players Championship are a very strong indication of the opportunities that lie ahead with respect to sports production and distribution. The biggest obstacle to a “bigger” show has often been things like compound space and travel budget, and decentralized production removes those barriers. And using the cloud for distribution enables the PGA TOUR Entertainment team to more easily give rightsholders exactly what they want, ultimately increasing the value of the rights for current and future rightsholders.

“Every Shot Live will continue to scale,” adds Raimondo, “and the cost will end up going down. The goal for us is to grow naturally from one event to — eventually, as technology improves and the cost goes down — more events.”