As a tier one esports organization with teams competing in League of Legends European Championship (LEC), Overwatch League (OWL), Call of Duty League (CDL), and others, Misfits Gaming Group’s media-production team is constantly churning out fresh content to serve the fans.

Last year, Misfits Gaming announced the opening of its new 18.000-sq.-ft. corporate headquarters in Boca Raton, FL. Although the pandemic has forced many on the Misfits media-production team to continue to work remotely, the Boca Raton office is equipped with a brand-new fully equipped production studio complete with Blackmagic Ursa Mini 4.6K and Sony A7iii cameras, as well as a Maverick 2 Pro drone.

With the LEC and CDL season in full swing and OWL set to kick off next week, Misfits continues to ramp up its production operation to serve its hundreds of thousands of fans and subscribers across YouTube, Twitch, and social platforms.

SVG sat down with Misfits Gaming Group President, Media and Branding, Ella Pravetz, who oversees a team of 15+ creatives from production to social media and design across three brands: Misfits Gaming (LEC), Florida Mutineers (CDL), and Florida Mayhem (OWL). Pravetz discussed the Misfits content-creation ecosystem, how her content strategy varies from one social/digital platform to another, her belief in the “YouTube trickle-down theory,” how to engage with players and tell their stories authentically, and what the mainstream media-production industry can learn from the esports sector. 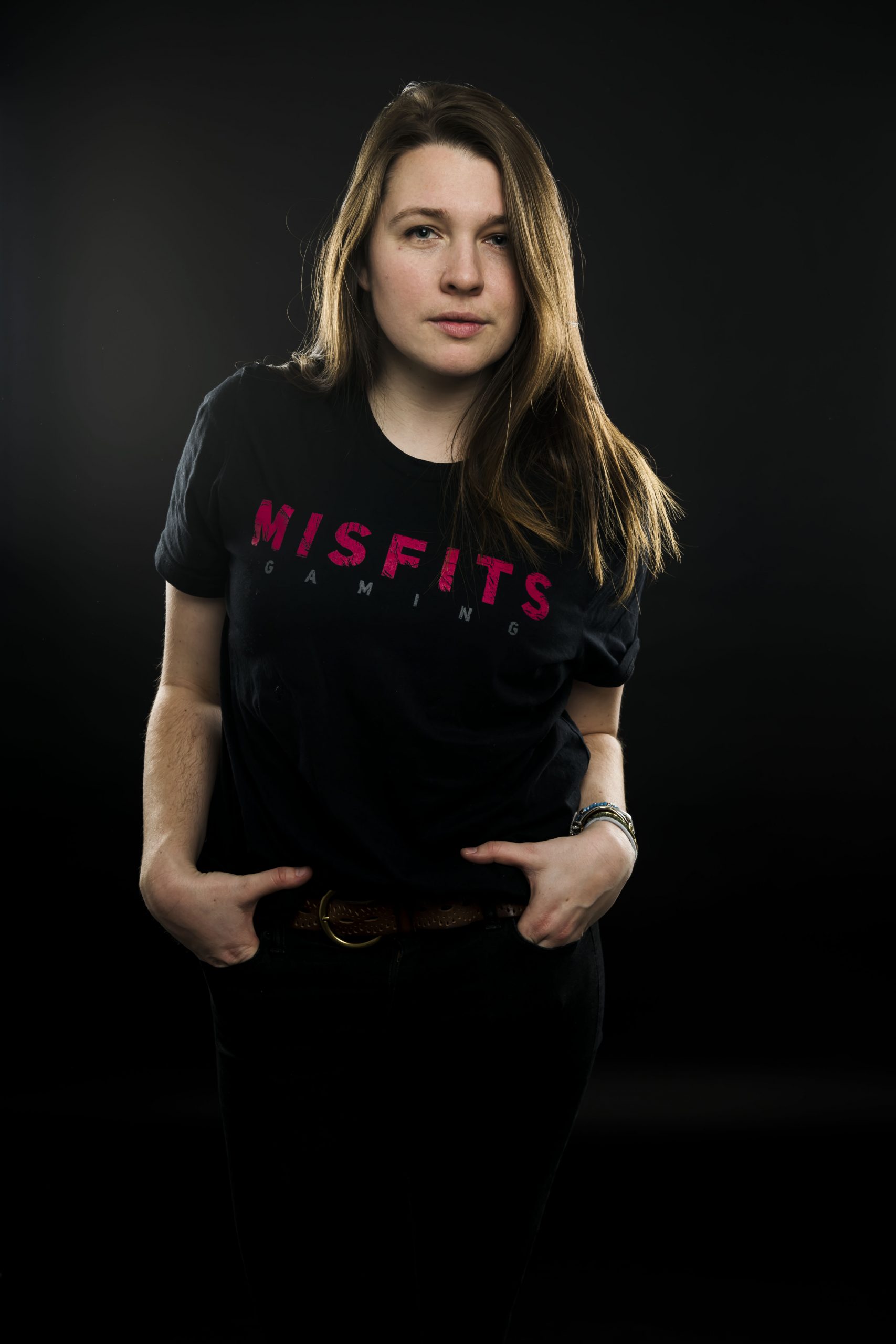 Misfits Gaming Group’s Ella Pravetz: “If you create really strong long-form content and different series on YouTube, that can fuel a lot of the social [platforms].”

Tell us a bit about your production operation and how it has evolved since your arrival.

Misfits was founded in 2016 with the [League of Legends EUW Challenger Series] team, and I joined in 2017. Back then, I was one of the first creative people hired on the European side, and we didn’t have a studio; we just stayed in the gaming house and covered the team. We’ve grown a lot in just the last four years.

[Previously], half of us were in Berlin covering League of Legends, and half of us were in L.A. covering Overwatch League. I eventually took over the role of overseeing all the different brands and creative teams and was [tasked with] how to create the infrastructure for that. Since then, within my department, we’ve created a design team, a social-media team, a production team, and a postproduction team.

[In 2020], we created our headquarters in [Boca Raton], which is where we are based now. Things have been in flux a bit with COVID, as our needs have changed and most of my team is now working remotely. I’m one of the only people [onsite] in Florida for any needs we have. But our new office is starting to open up, and we’re moving in more equipment and furniture. We have a new studio space that I’m currently working out of and putting together the equipment room. It’s still in the really early stages, but we’re already seeing a lot more efficiency compared with the past.

How do you create and distribute content differently for the various social and streaming platforms?

I personally believe in the YouTube trickle-down theory: if you create really strong long-form content and a variety of different series on YouTube, that can fuel a lot of the social [platforms] and other areas. YouTube is one of the best tools we have in terms of searchability and engaging new audiences.

If you do a great long-form series, the memes and segments that we make in those series will often become the content you see on social. So those long-form series can give you micro-content for everything else. 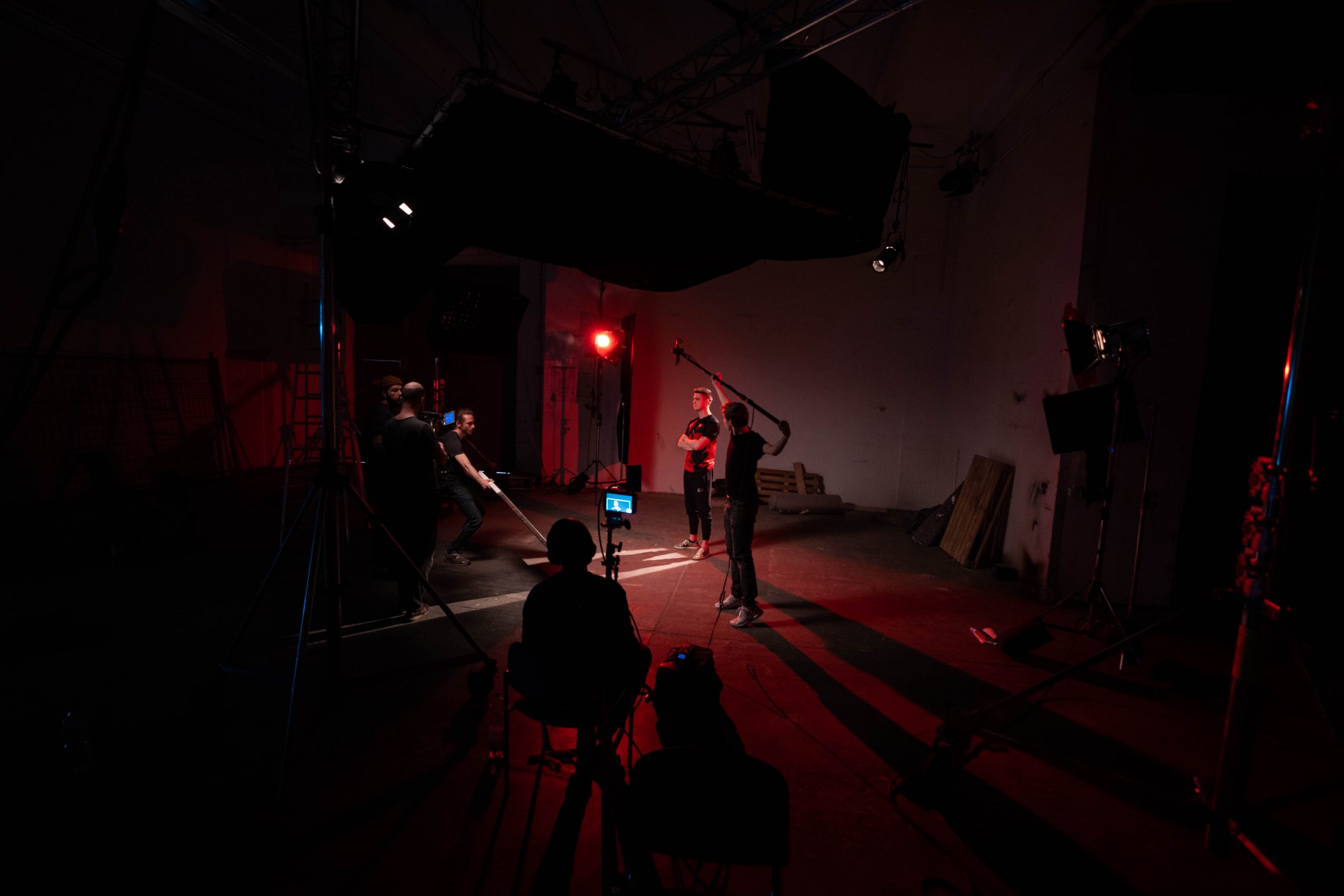 But getting to the point where you can fully do that is very hard, because each YouTube channel should probably have five to seven 10-minute pieces come out every week on top of smaller features. Multiply that by our different channels [for Misfits Gaming, Mayhem, and Mutineers], and that starts to add up fast. That takes a lot of time and investment.

How can you maximize your time and investment to get the most eyeballs possible without breaking the budget?
I believe, if you really want to be successful on YouTube, you have to categorize your content by how people engage with it.

First, there are people who engage by browsing. That translates to [creating] click-worthy titles or thumbnails that show this is a compelling story or segment so you want to click on it.

Second, there is the searchable [audience]: people [who] are literally searching for something specific. We have to think about what people are searching for within esports, and often that is [educational] content that show you how to improve gameplay, teaches really good lessons, and shows trends that are happening today.

And the last [category] is content for fans and subscribers. What do people who already know [esports] care about? That might be recapping the LEC [match] or focusing on what players they already love are doing. It’s more celebrity-type content [serving] people who are already emotionally attached.

Our team comes up with different concepts based on those different audience categories. What are the click-worthy topics or searchable terms for each audience? And we come up with concepts for different series and either develop them ourselves or work with our partnerships’ teams to try to get them branded and paid for.

How do you engage players from your teams and showcase their personalities within the content you create?
I’ve focused a lot on this and direct the majority of the player stories that we do. Coming from a directing background, I’m really focused on telling their story. I tend to know or have personal relationships with a lot of them because I work directly with the team and I’m pretty outgoing. So I will hear a kernel of a good story from someone and then just chase it. 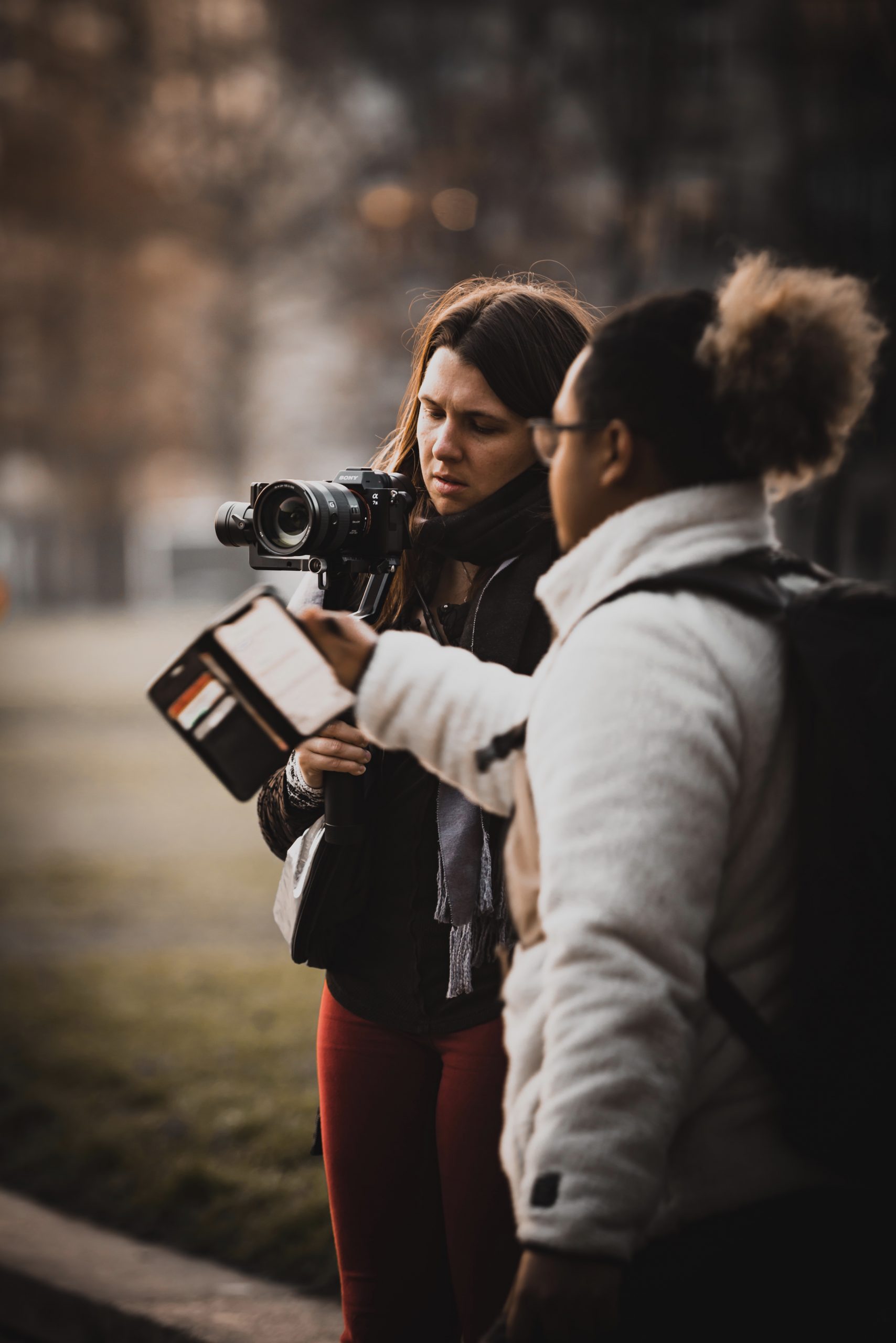 I always start by building their trust and telling them that anything they want off the record is off the record. Then we sit down in a more casual setting and just talk about their history and who they are.

That’s always what I’m chasing. Is it because their brain is a little different or they’re a little bit more obsessive because they were going through something in their personal life? For example, one player — Rekkles from Fnatic [where I was before Misfits] — was trying to be a professional soccer player, but he broke his leg, and gaming was his way of coping.

I find that one trait, dig into it, and then build a story around the real human element. Usually, there’s such a personal relationship that we have built that they really trust me. And I always involve them very heavily in the process of what we can show and what we don’t show. With that trust, you’re usually able to tell very authentic, vulnerable stories.

You mention the authenticity factor, which is key in the gaming and esports world and also extremely hard to achieve. How do you engage with this audience on an authentic level?
When you spend a lot of time on the internet like our audience does, watching a lot of independently produced [content], you know what authentic feels like, and, if something doesn’t feel right, you’re going to be able to tell that pretty quickly. I think the way to achieve authenticity is simply to tell the truth. You can, of course, omit certain things, but just don’t tell them something that’s not true. It’s that simple. 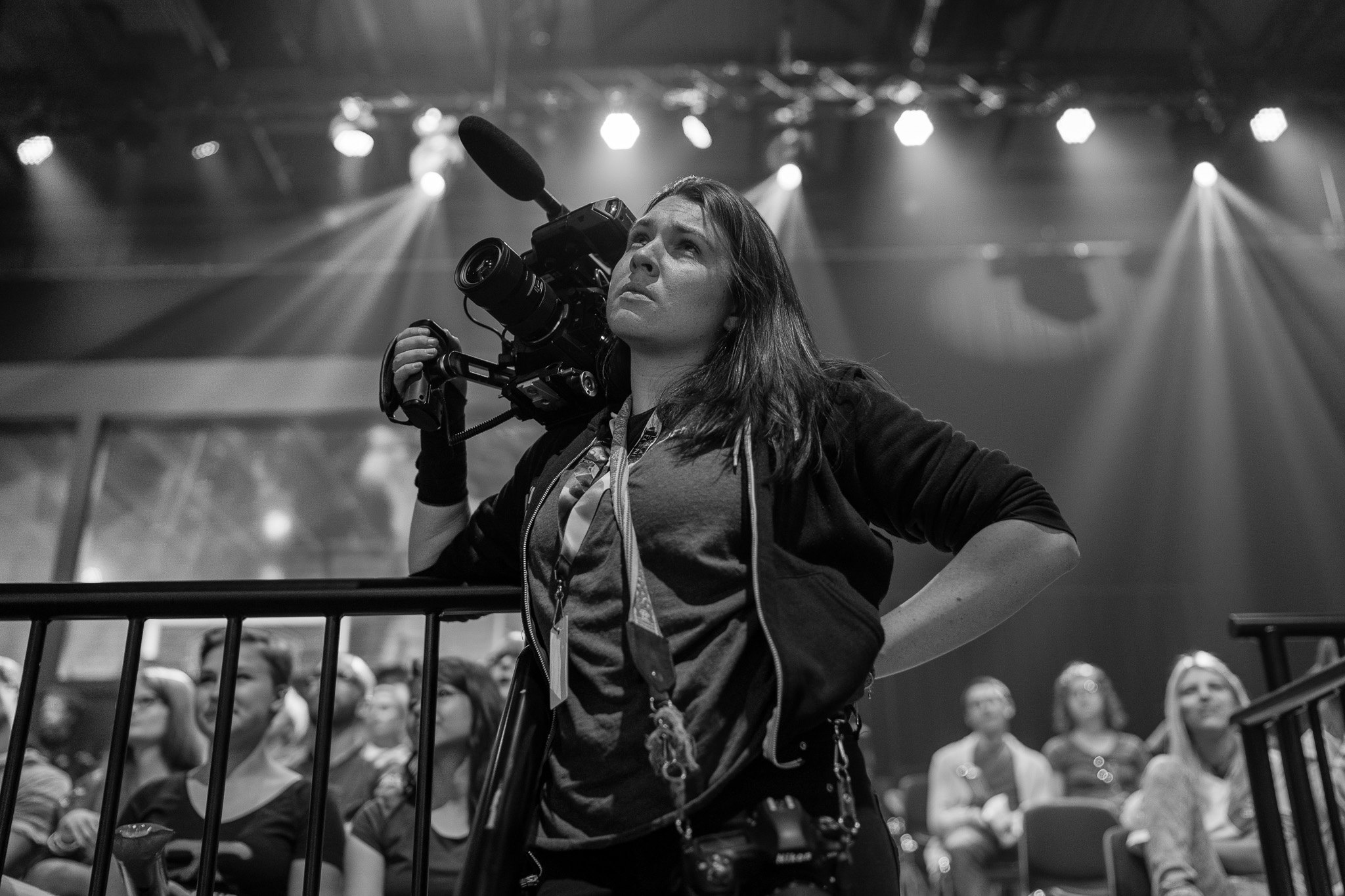 I also always try to lean into finding the humor in things, and I think our audience really enjoys that. I’ve done things like make fun of the way players tie their shoes, and people love that because it’s relatable and humanizing. I think there’s a time and place for things that are more formal and hype-ish, such as a preseason hype video. That’s where you can have a lot of big lighting and effects. But, ultimately, I think authenticity comes down to telling the truth, having a sense of humor, and treating your audience with respect.

What can the larger video-production community, especially sports-media organizations, learn from esports content creators like Misfits?
I think there’s a lot to be learned from both sides, actually. We both can benefit from listening to each other. We could definitely improve on our organization. We don’t have the same structure and planning [as larger media companies], so there’s a lot of expectations that one person can do everything in the grass-roots esports world. A lot of [esports organizations] struggle with understanding all the different roles and the different elements that go into a large project. We could definitely improve on that.

As for what they can learn from esports, I think those larger companies could focus more on the authenticity and the content itself, rather than the formality and bureaucracy of production. We tend to be a bit more guerilla and just do what whatever we need to do to get the point across. You don’t need to throw a 30K budget at a simple interview video to achieve what you’re looking for. I think the scrappiness and lack of hierarchy in a lot of esports allow us to mobilize a lot faster and, as a result, the speed at which a lot of people work in esports is pretty incredible compared with the [larger media industry].