Unlike past ESPN efforts, this was a standalone production with dedicated truck and crew 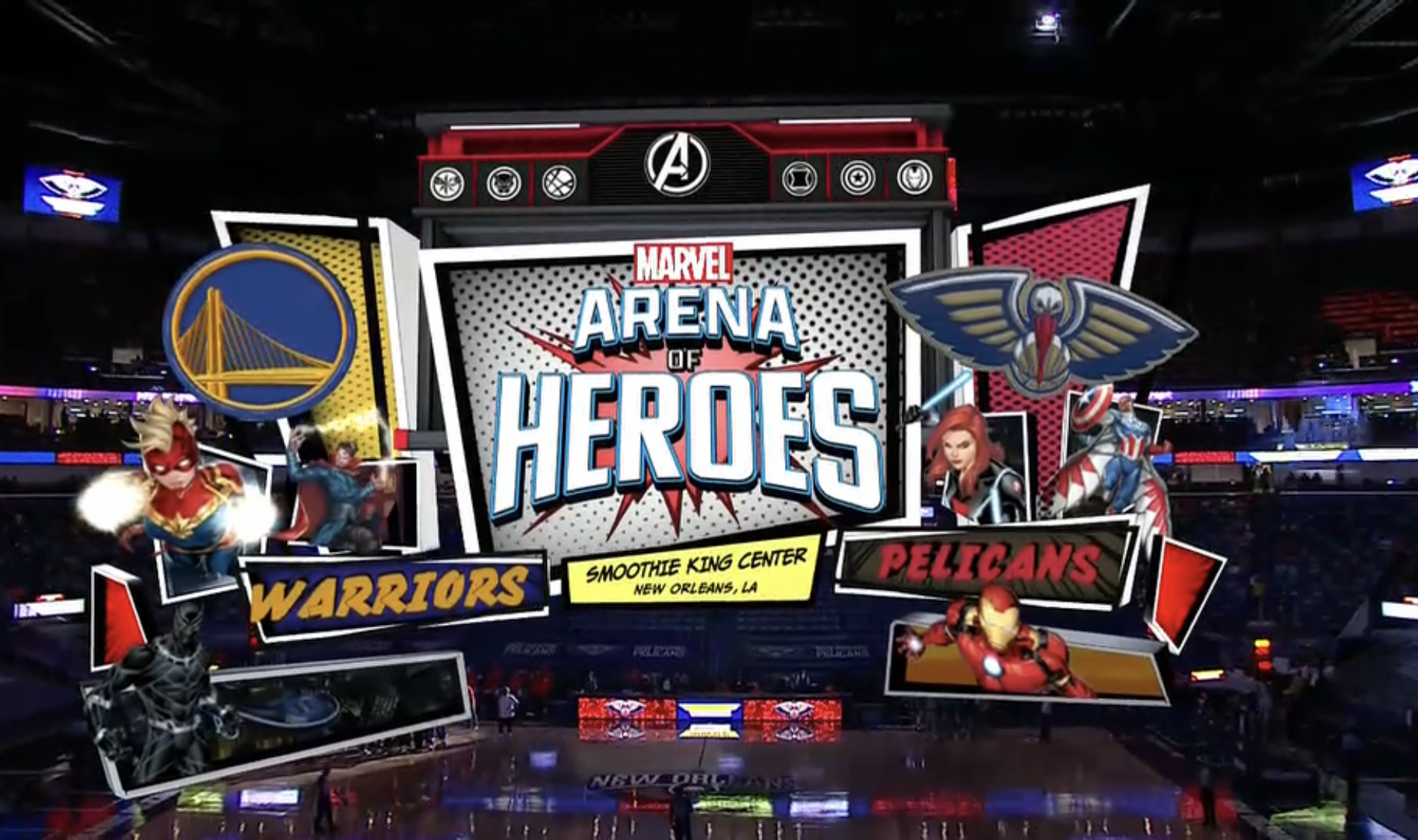 The Marvel-centric broadcast — carried on ESPN2, ESPN+, and ESPN Deportes alongside the traditional broadcast on ESPN — follows ESPN’s MegaCast efforts and marks its latest attempt to appeal to demos outside the traditional sports fanbase. However, unlike most of the past efforts, the Marvel’s Arena of Heroes NBA show was a full side-by-side production alongside the main broadcast production, with its own truck and crew onsite at Smoothie King Center in New Orleans. 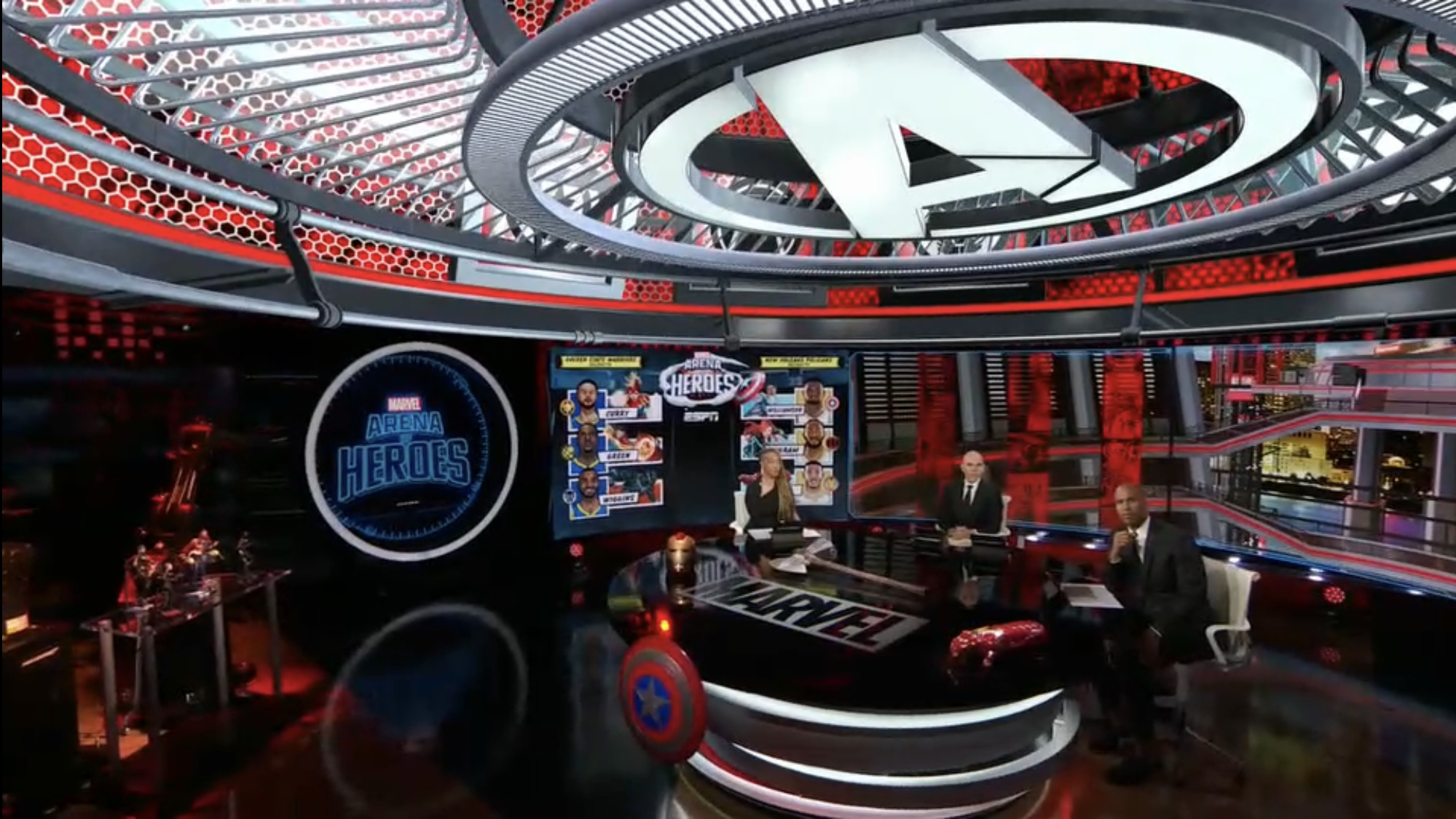 ESPN transformed Studio Z into a Marvel-themed set for the broadcast.

“This is a bit of a departure from [ESPN’s MegaCast and other alternative presentations]: as big a show as the main telecast vs. what we normally would do with MegaCast and other [alternative presentations], which is to add to the existing resources and present it in a different way,” ESPN Senior Coordinating Producer Ed Placey said before last night’s game. “This is a true side-by-side production, so it’s a very different undertaking and required a very different mindset.”

At the top of the broadcast, ESPN’s pregame show set the scene from the Marvel-themed set in Bristol: the Avengers are looking to recruit a new member for their team from the NBA elite and are observing the battle between the Warriors and the Pelicans, focusing on three star players from each team (the Warriors’ Stephen Curry, Draymond Green, and Andrew Wiggins and the Pelicans’ Zion Williamson, Grandon Ingram, and Lonzo Ball).

Each of these players gained Marvel Hero points during the game (based on points, rebounds, assists, steals, and blocks, as well as missed field goals, free throws, or turnovers plus 10 points for the winning team), and the player with the most Marvel Hero points — which ended up being Draymond Green — was crowned Marvel’s first Champion. 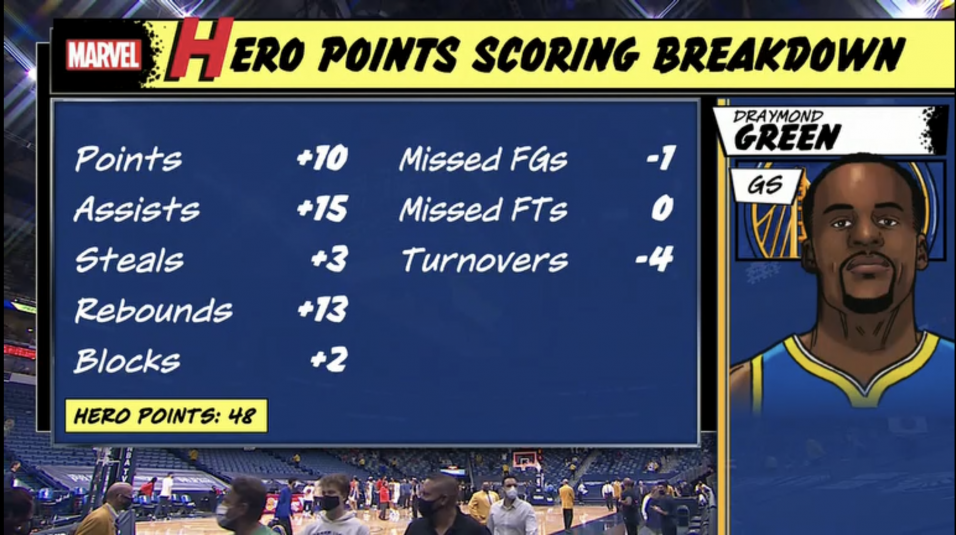 ESPN’s Creative Studio group created the look and feel of the broadcast, working alongside the Marvel Creative Team and technology providers SMT, Second Spectrum, and Girraphic. Among the highlights were comic-book–style insert graphics and scorebug; player- and shot-tracking graphics; Marvel-themed animations overlaid on the basket at each made field goal; and other augmented-reality elements, including a viewing deck above the floor where the Avengers (as 3D virtual renderings) monitored the action on the court. 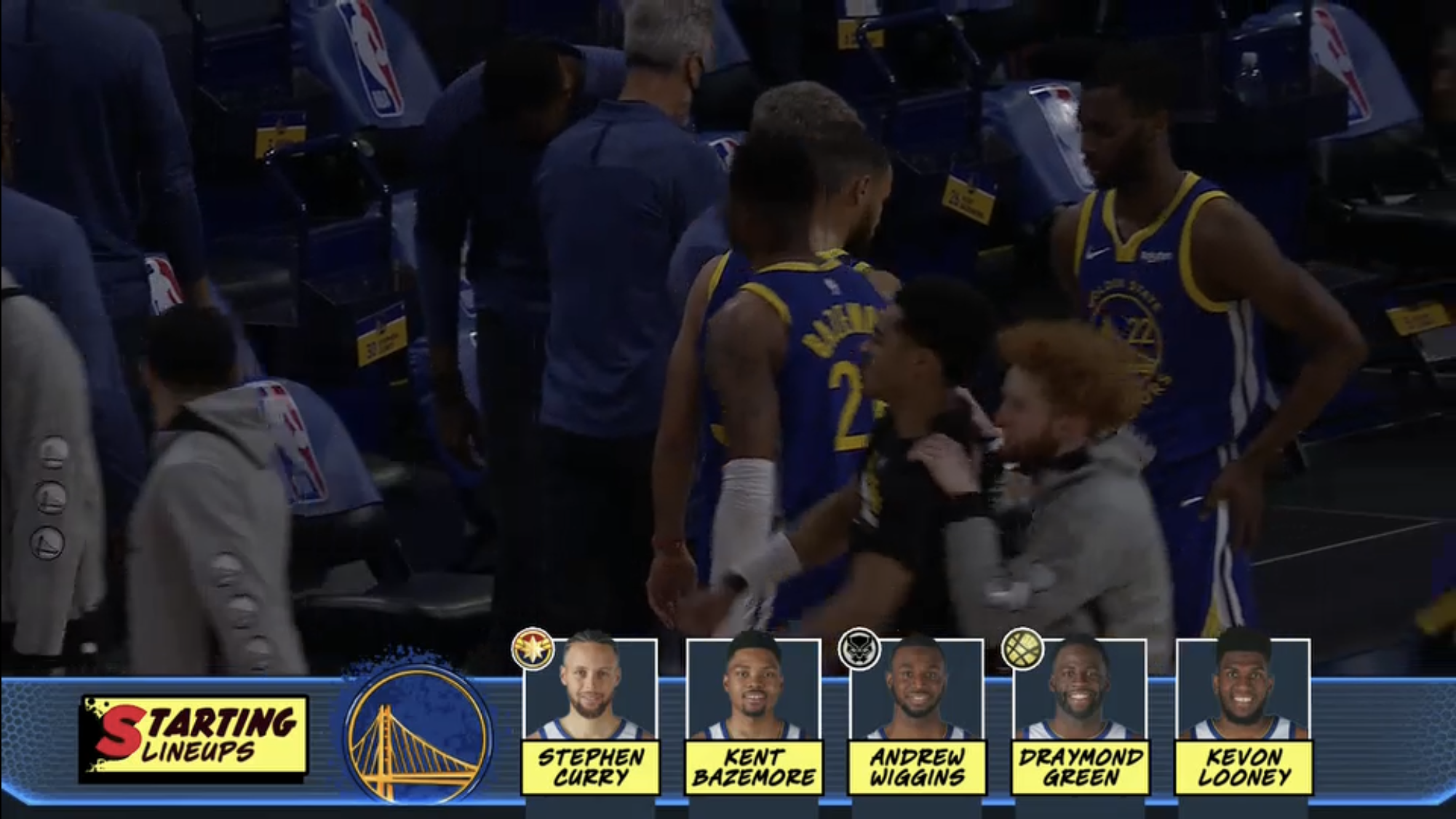 All insert graphics were given a new comic-book–style look for the alternative presentation.

“Our amazing ESPN Creative Studio group built everything,” says Placey, “and the Marvel Creative Team worked side by side with us, providing the assets, giving feedback, and guiding us every step of the way. It has been a wonderful collaboration between ESPN and Marvel, and we couldn’t be happier with it. It has taken our previous projects and stepped [them] up to a new level.”

ESPN rolled out NEP EN3 mobile production unit and a dedicated crew in New Orleans (graphics operators were located in Bristol) to produce the Marvel broadcast. The production controlled its own complement of nine cameras (including the Above the Rim robos), shared eight other camera feeds from main telecast and the six cameras provided to both shows by the arena. 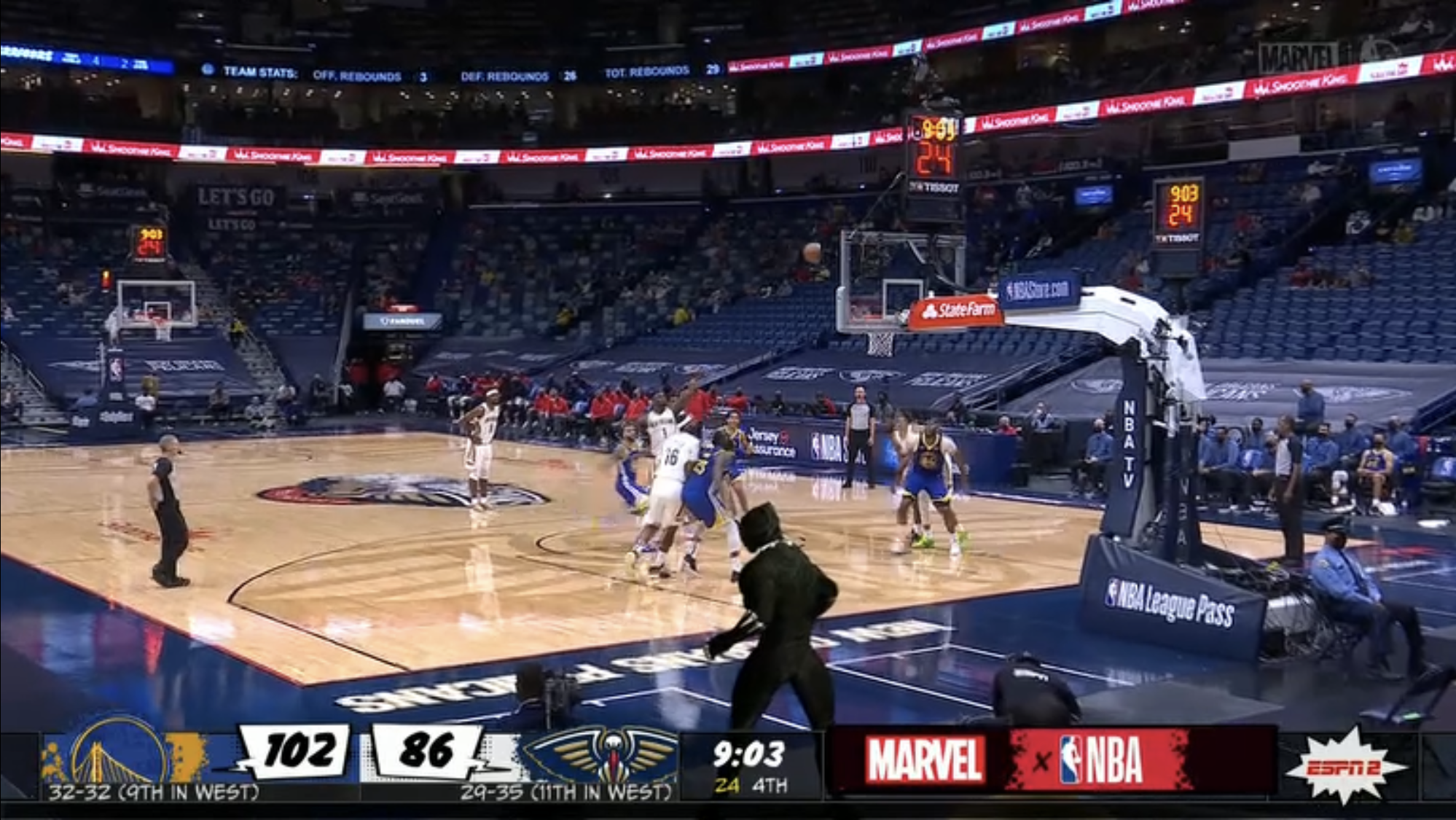 The production team set up a low corner camera to serve this angle featuring 3D virtual animations of Marvel characters like Black Panther.

“This is a true side-by-side, so we’re down in New Orleans with our own truck separate from the game truck,” says Placey. “We’re sharing a few of the main game cameras for a replays. But we control all the cameras that we’re cutting for the Marvel telecast. The other cameras are just to make sure we have additional replay angles so nothing gets missed on either show.” 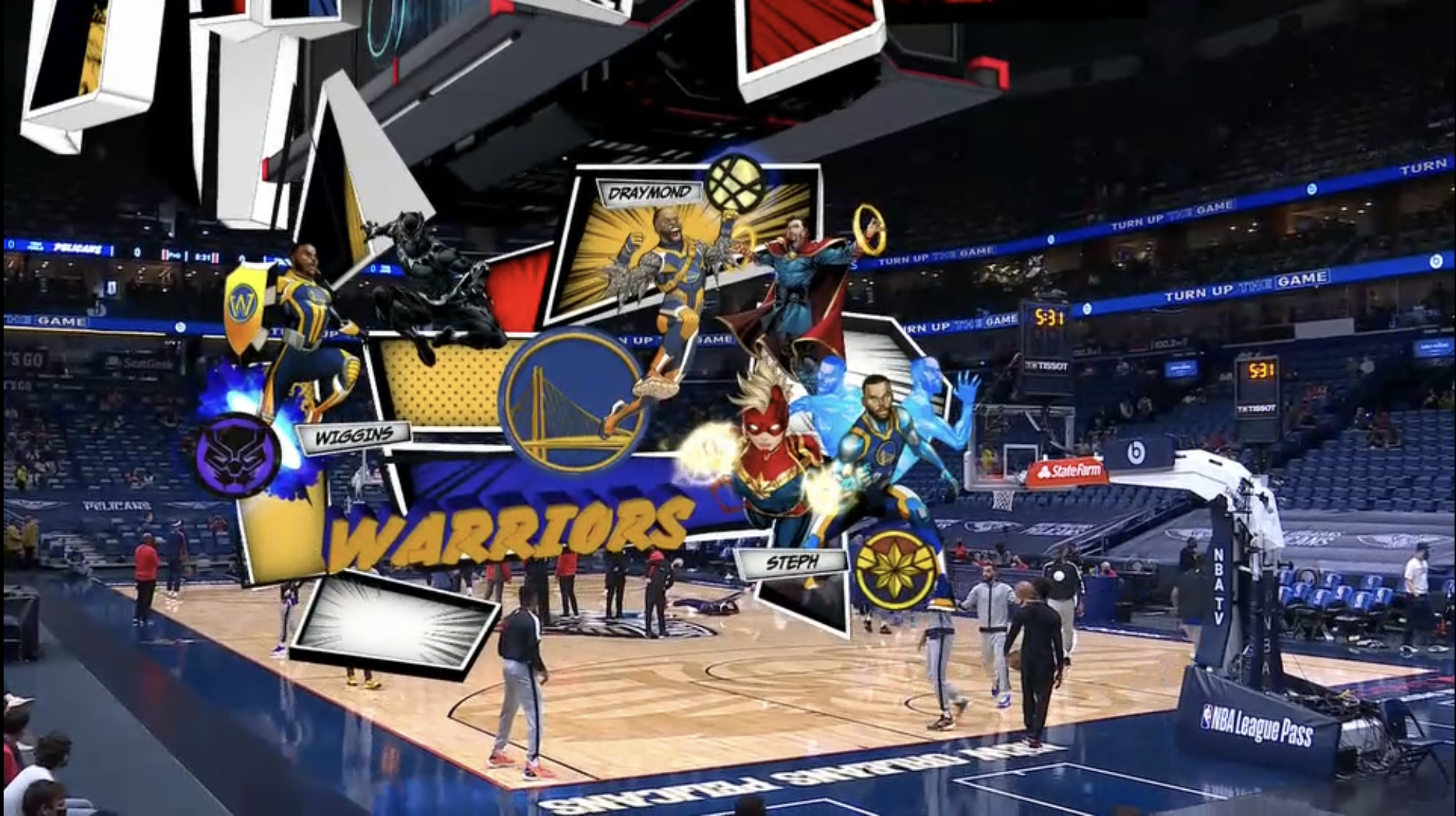 AR elements were featured heavily in the Marvel-centric broadcast.

On Sunday, ESPN brought a local team into the Smoothie King Center to conduct a thorough rehearsal for the Arena of Heroes broadcast. After months of development, this was the first time hundreds of Marvel-centric elements were integrated into a live game. ESPN Monday Night Football director Phil Dean and Sunday Night Baseball director Doug Holmes were at the front bench. 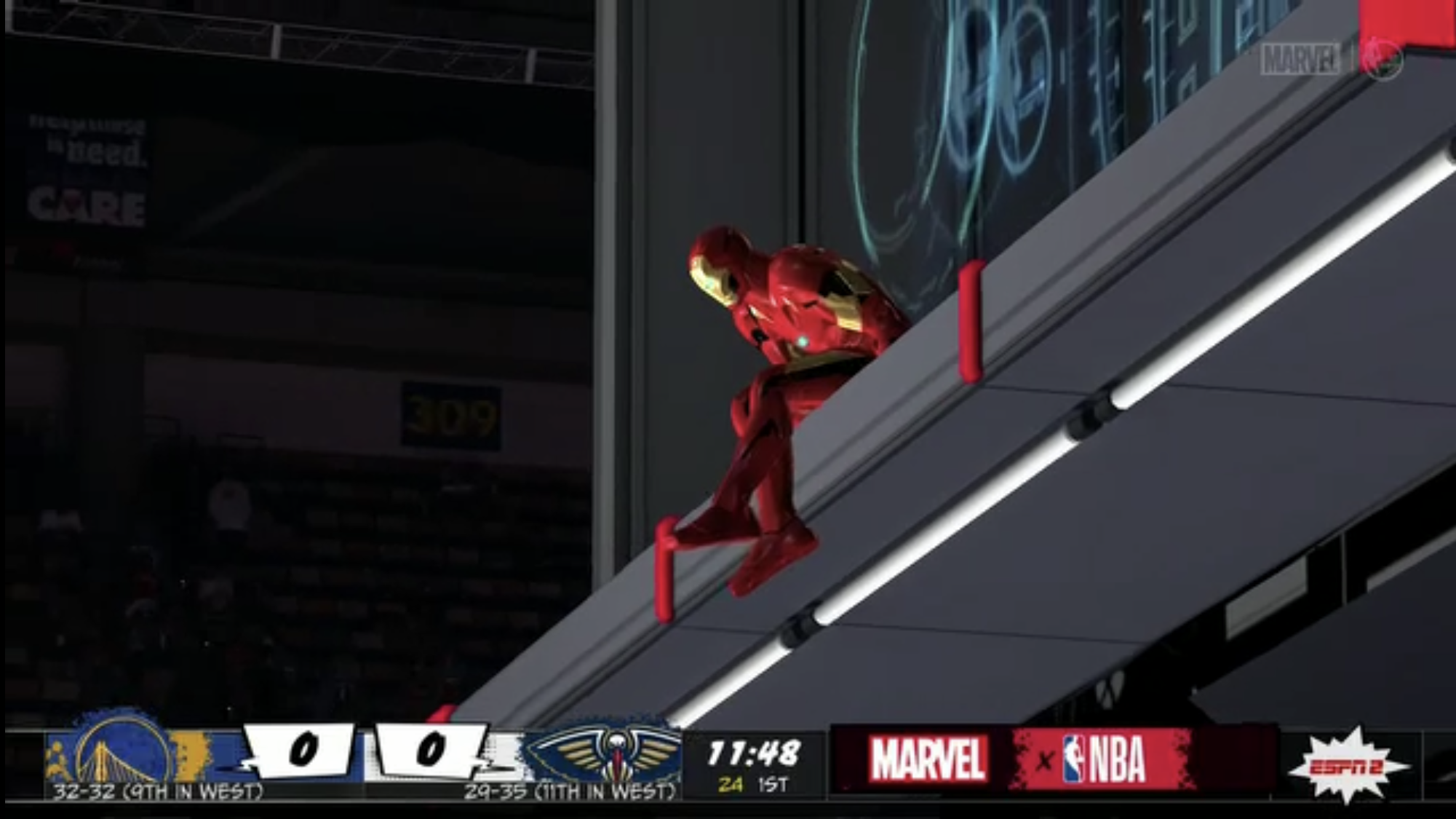 A 3D virtual rendering of Iron Man looks on from the watch deck above the floor.

Placey notes that this was significantly different from ESPN’s previous alternative-presentation productions — such as MegaCasts for the CFP National Championship Game and last season’s NFL Wild Card Game or the recent NBA Daily Wager Special — which used primarily a clean feed from the main show.

“On the other broadcasts,” he says, “including the NFL Wild Card and the National Championship MegaCast, we made it a point to make sure that nothing was taking away the primary focus on the main ESPN telecast; everything was supplementary. But this strikes more of that equal balance and gives us a great opportunity to stretch our creative muscle.”

Graphics Is the Axis on Which the Broadcast Spins

The driving engine for the Arena of Heroes broadcast was the custom-designed graphics package created by ESPN’s Creative Studio group. Marvel’s Creative Team provided all the necessary assets to Director, Creative Operations, ESPN Creative Studio Scott Lodge and his team, which built hundreds of inserts and animations for the broadcast. 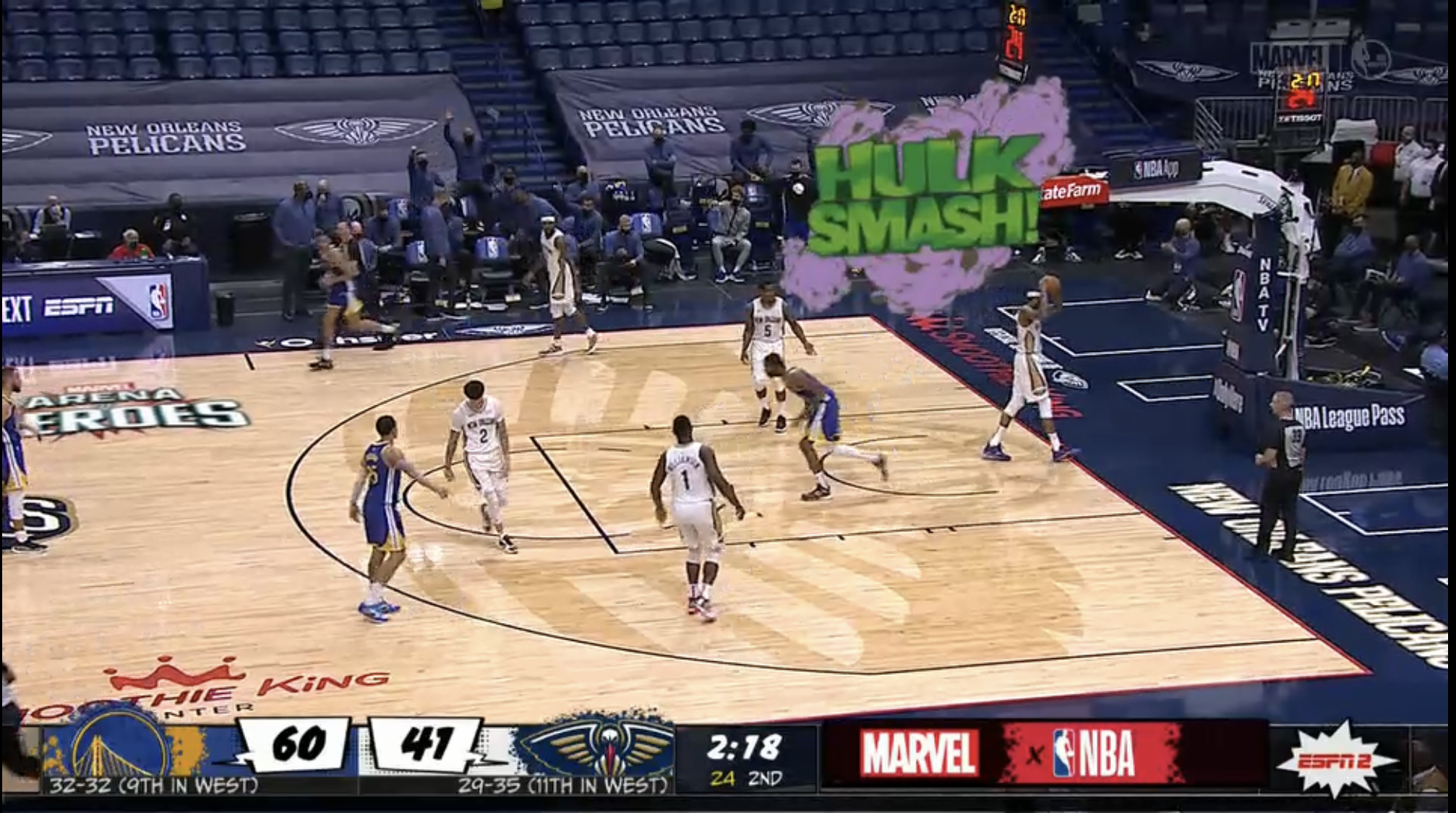 Character-driven animations were overlaid on the basket after made field goals.

The scorebug, which was based on the existing NBA on ESPN bug, displayed the game score at all times on the left and incorporated the Hero Points Leaderboard on the right (along with animations of Marvel characters). 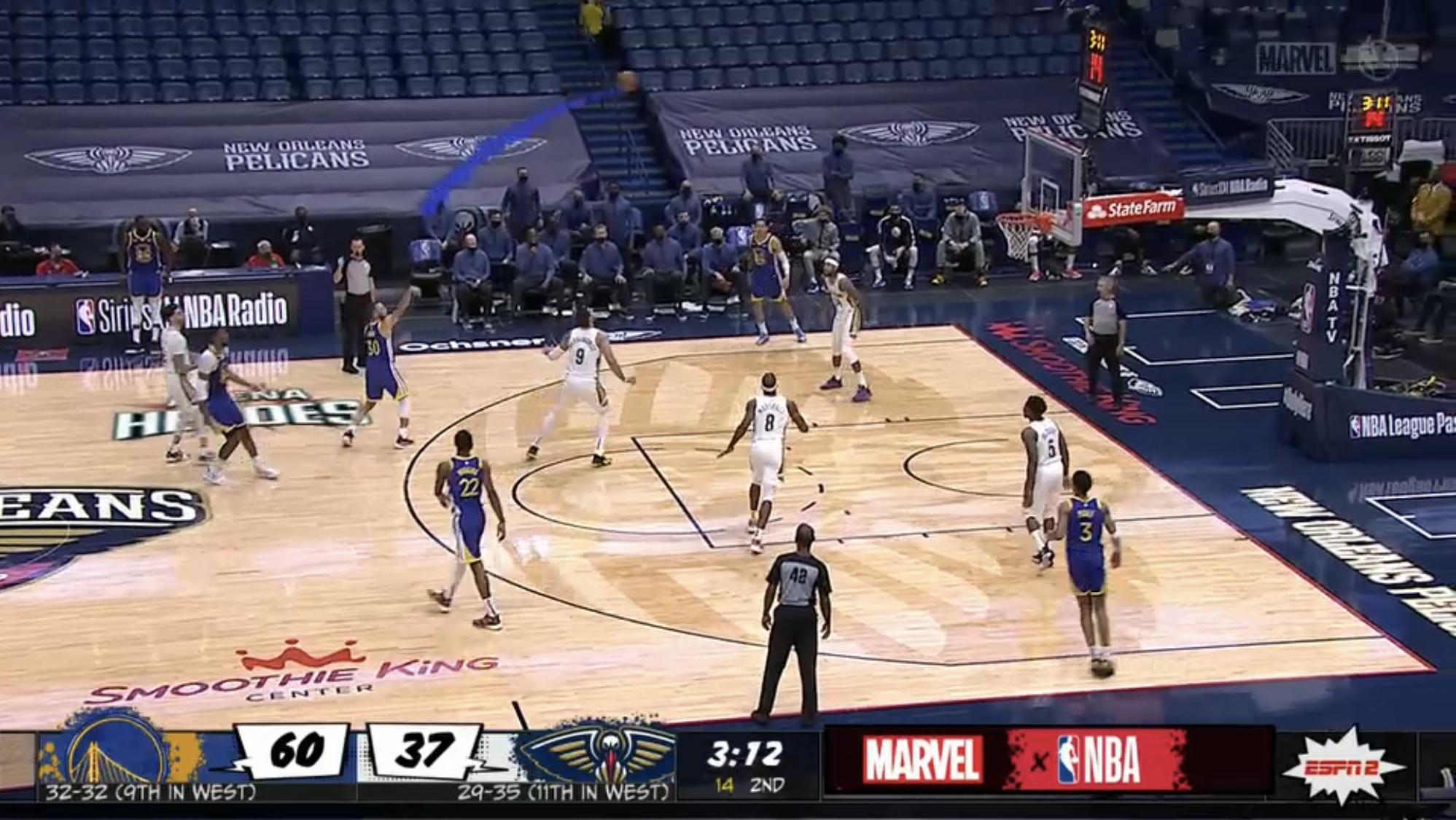 The broadcast included shot-trail graphics throughout.

“We based the entire graphic look on the shape and essence of the current NBA look but Marvelized it so it has more of a comic-book theme,” says Placey. “The layouts are similar to our NBA look, but the colors, geometry, and font styles speak to Marvel. Plus, we have integrated a lot of character visuals throughout [the presentation].” 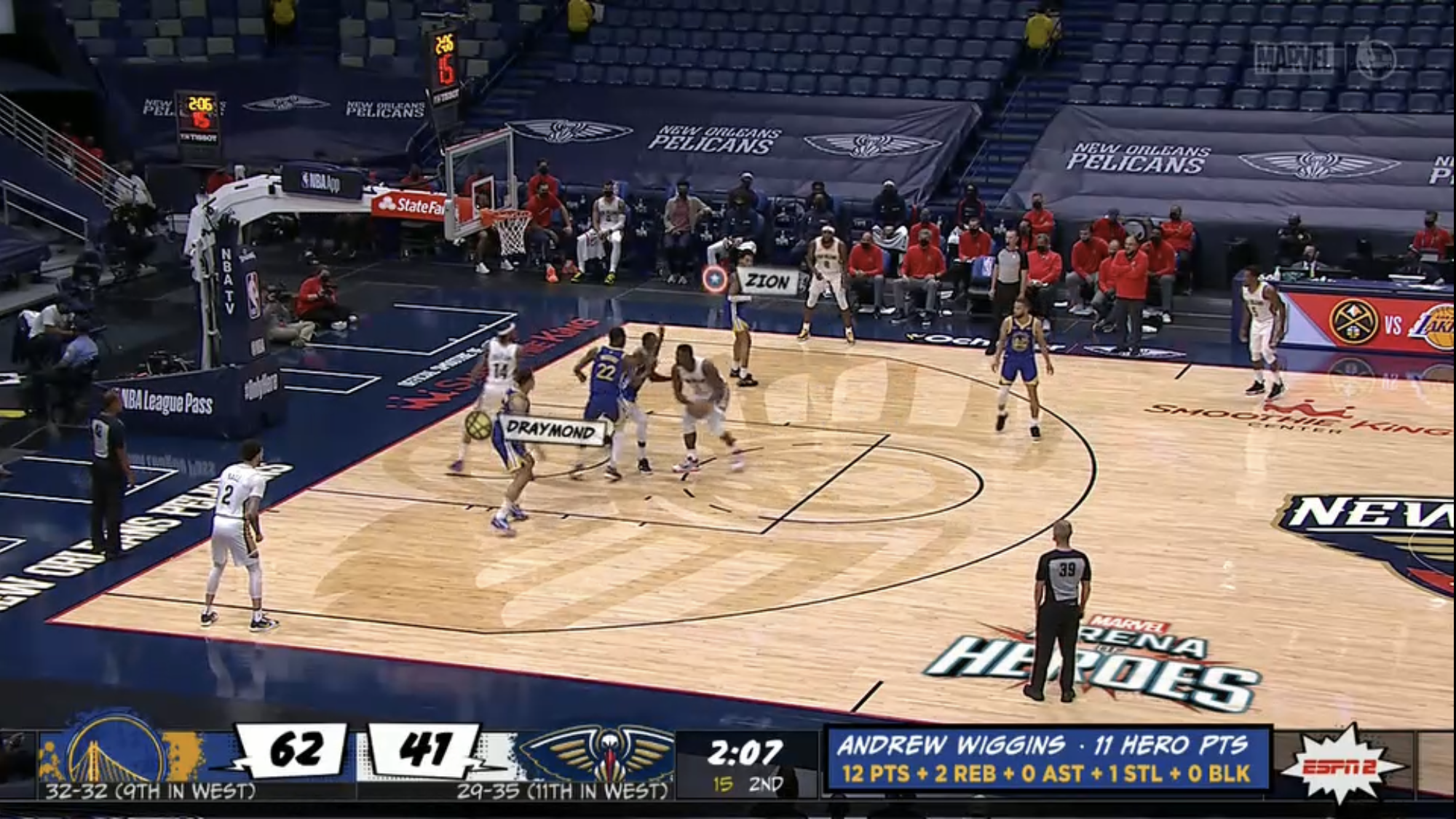 ESPN worked with SMT and Second Spectrum to create pointer graphics showing each of the six players, shot-trail graphics, and graphic overlays featuring Avenger and other character-specific logos when a shot was made. In addition, Girraphic provided multi-camera AR graphics throughout the broadcast (including 3D character animations of the Avengers on the court and also watching the action from the virtual watch deck overhanging the court), allowing ESPN to cut around to the same virtual scene from multiple cameras. 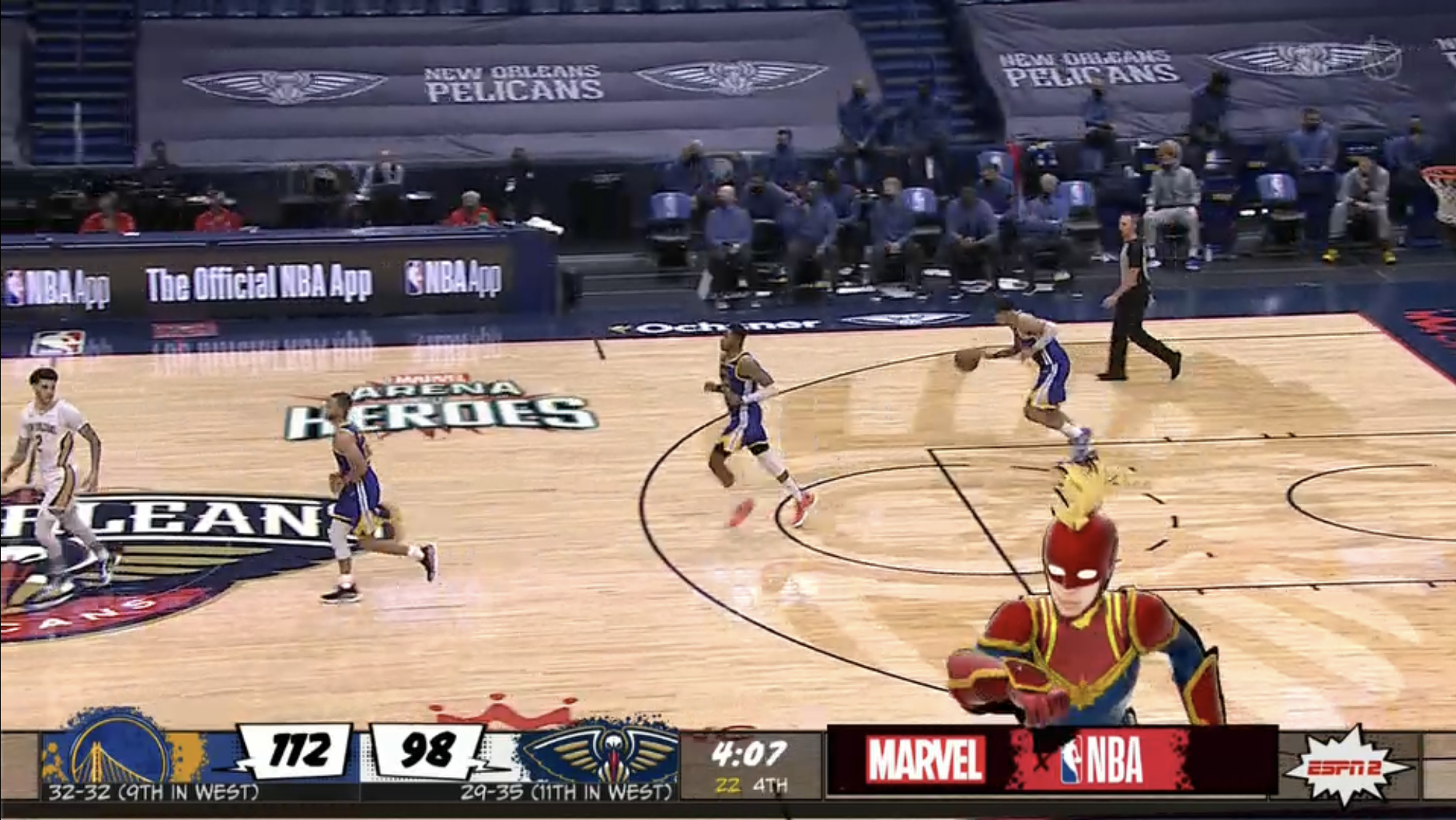 Marvel characters like Captain Marvel were integrated into the scorebug throughout the broadcast.

“We’ve done all of these things on other projects, but it has all come together here,” notes Placey. “This is the first telecast where we’re taking multiple versions of the virtual technologies we’ve used individually on other shows and bringing them together so they can complement and play off each other.”

On the music side, ESPN deployed a mix of its standard NBA on ESPN theme and the Avengers theme music.

ESPN commentators Ryan Ruocco and Richard Jefferson joined Marvel expert Angélique Roché to call the game and host pregame/halftime shows remotely from a fully customized Marvel-themed set in Studio Z in Bristol. According to Placey, the studio was modeled after the Avengers headquarters building and leans into the “Tony Stark technology look.” In addition to LED monitors displaying Marvel-themed content, the studio featured plenty of AR elements to reinforce the high-tech Stark Industries aesthetic. 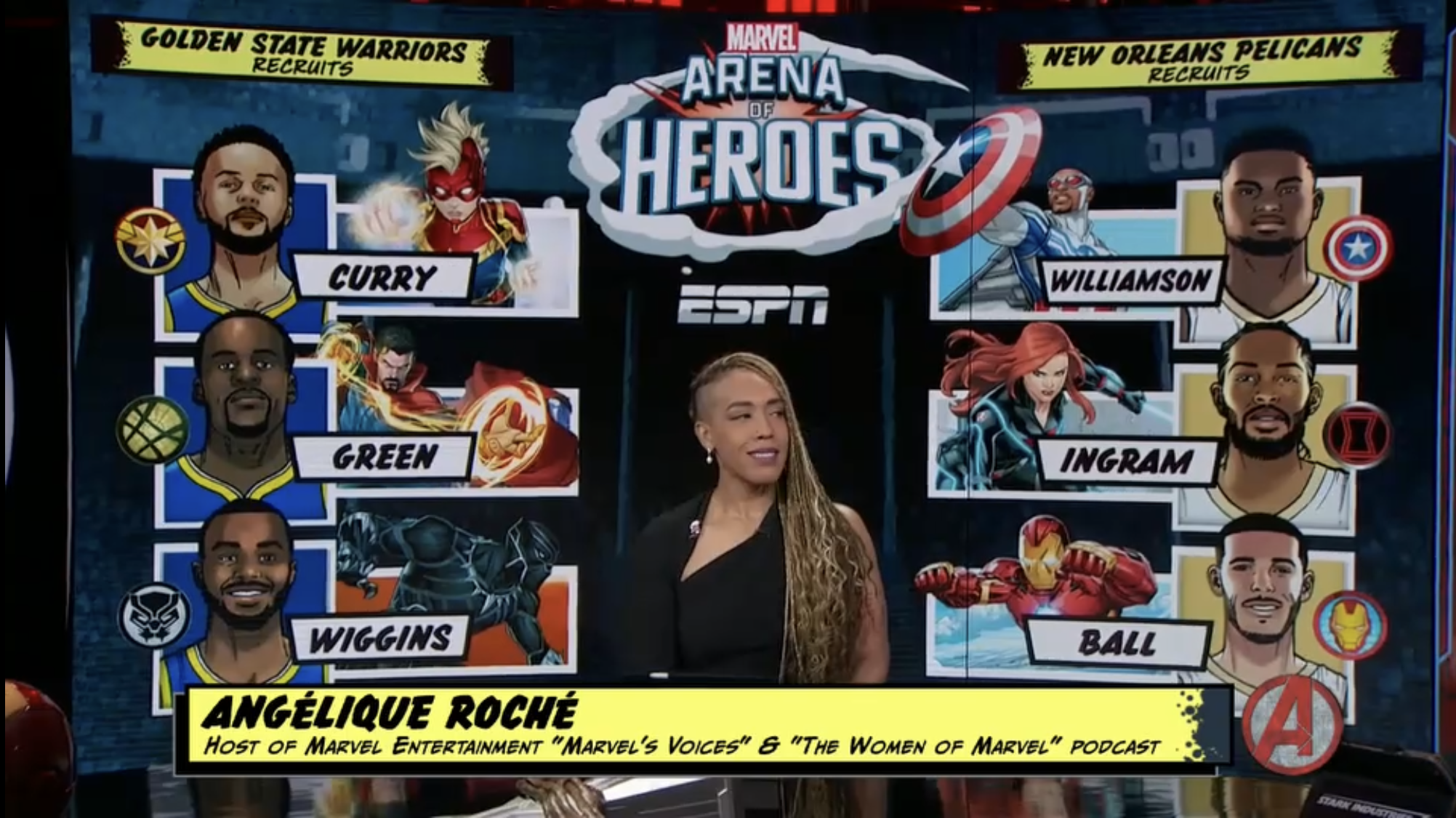 “We certainly had the option of bringing them here to New Orleans,” says Placey, “but we quickly realized that we could do a much more impressive visual job from one of our virtual studios with augmented-reality visuals if we kept that in Bristol and took advantage of all the resources there, rather than trying to build something in a socially distant, space-limited arena.” 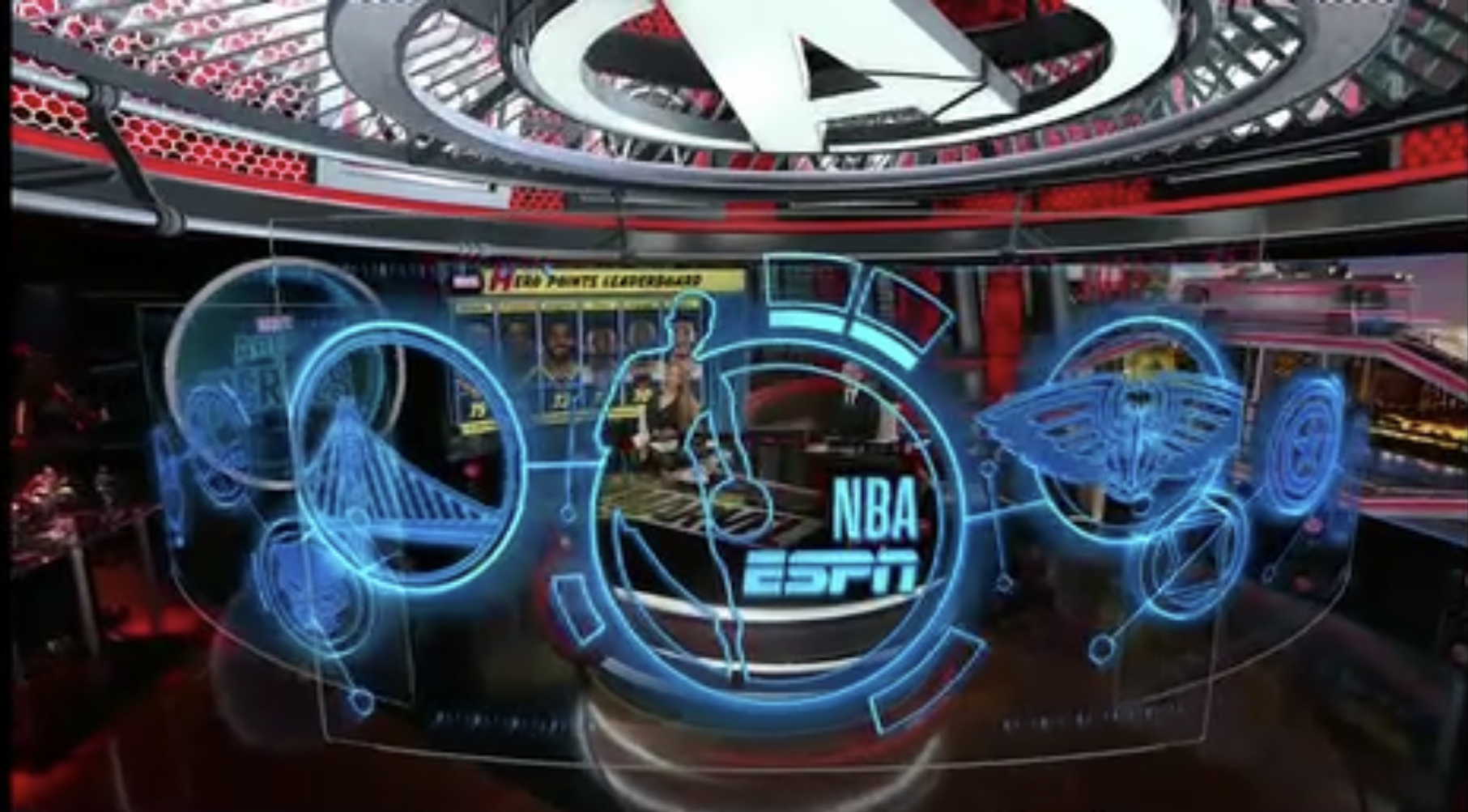 Looking Ahead: More on Alternative Presentations on the Horizon?

With the first-ever Marvel Arena of Heroes NBA broadcast in the books, Placey is looking forward to seeing what the gains from this broadcast could mean for future alternative presentations.

“We got the best of the best in terms of our Creative Studio team, producer and director, and crew and were able to create something that I think is [different] from anything that has been done before,” he says. “This was a challenge to us to make [the broadcast] stand out in a way that would make people sit up and take notice. We’re excited for that and what it could mean moving forward.” 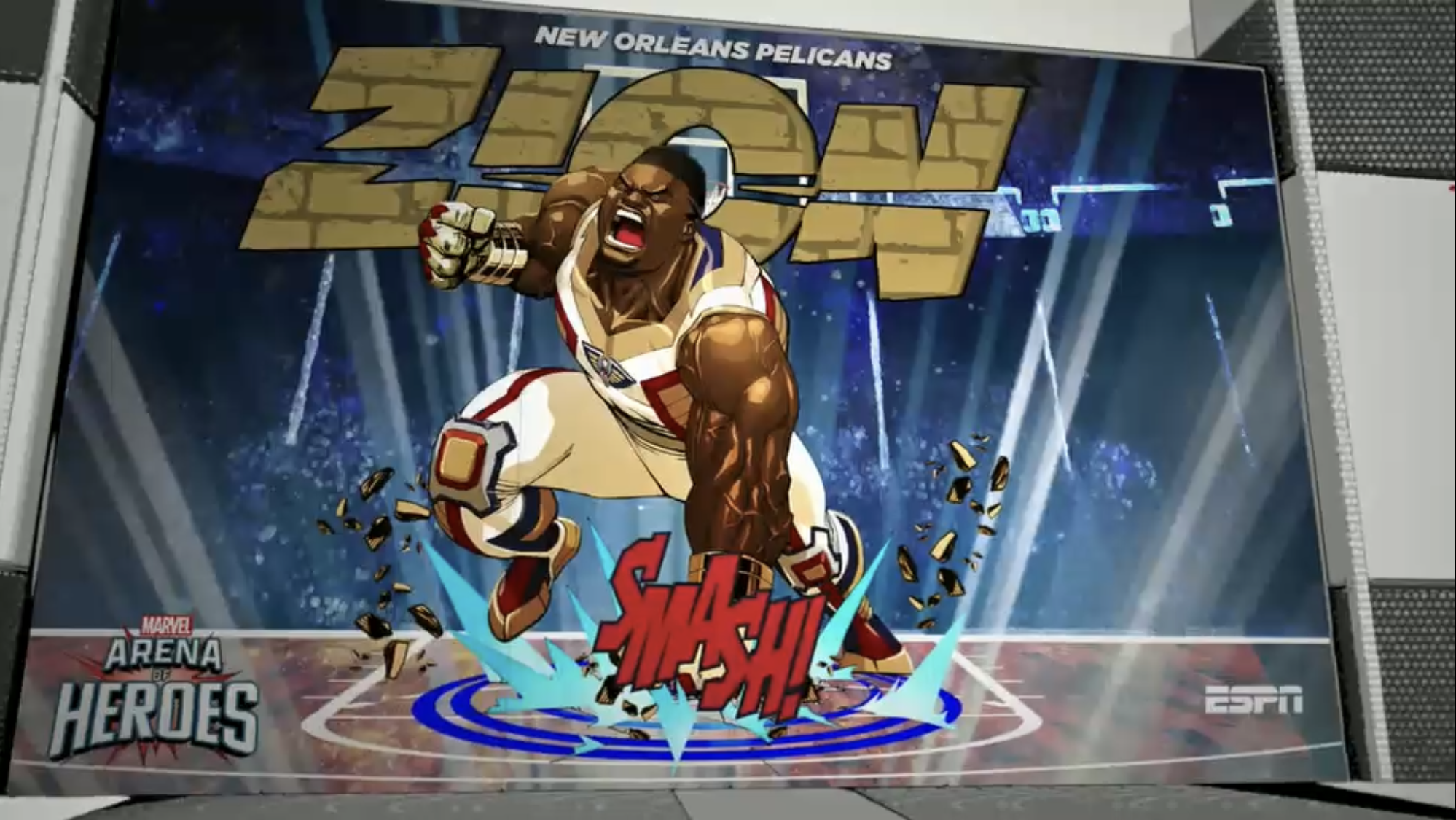 ESPN created animations for each of the six players competing in the Arena of Heroes.