For the first time in its 130-year history, the French Open has gone night-owl. Stade Roland Garros is hosting night sessions at this year’s tournament, and Tennis Channel is bringing all seven nights of evening matches to U.S. audiences as part of its 340 hours of TV coverage during the 15-day event.

With the new night sessions starting at 9 p.m. locally/3 p.m. ET, most days feature at least 10 hours of live matches from the start of play at 5 a.m. ET through the last match on the schedule. The evening sessions mean longer days than ever for the production team at Roland Garros — something Tennis Channels’ crew is accustomed to given its grueling year-round schedule. 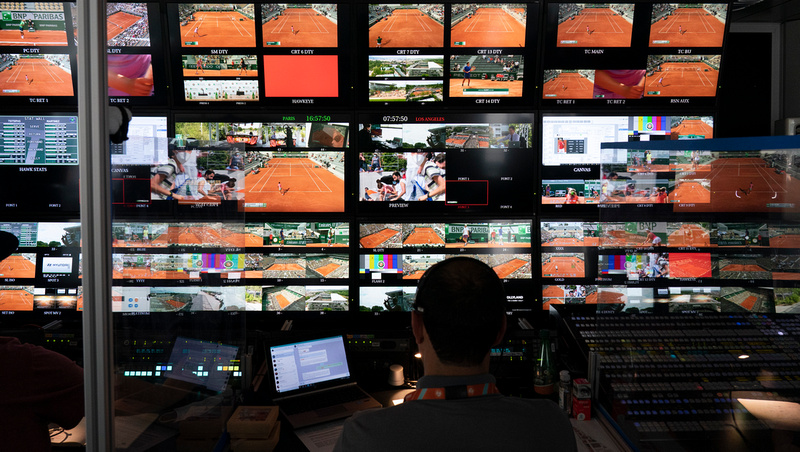 “Roland Garros is our Super Bowl, but, in reality, the event represents Weeks 21 and 22,” says Bob Whyley, SVP, production/executive producer, Tennis Channel. “Every week, we produce 12-16 hours of live tennis with studio shows. It’s very natural for us to go long and late.”

Tennis Channel is currently in the midst of delivering 140 hours of live matches (plus another 90-plus hours of encore replays) along with daily news-and-analysis show Tennis Channel Live at Roland Garros. In addition, streaming service Tennis Channel Plus is offering live feeds from 16 courts (approximately 600 matches), and fans can access roughly 1,500 streamed hours of live play via the service (including court coverage, press conferences, and iso cameras). 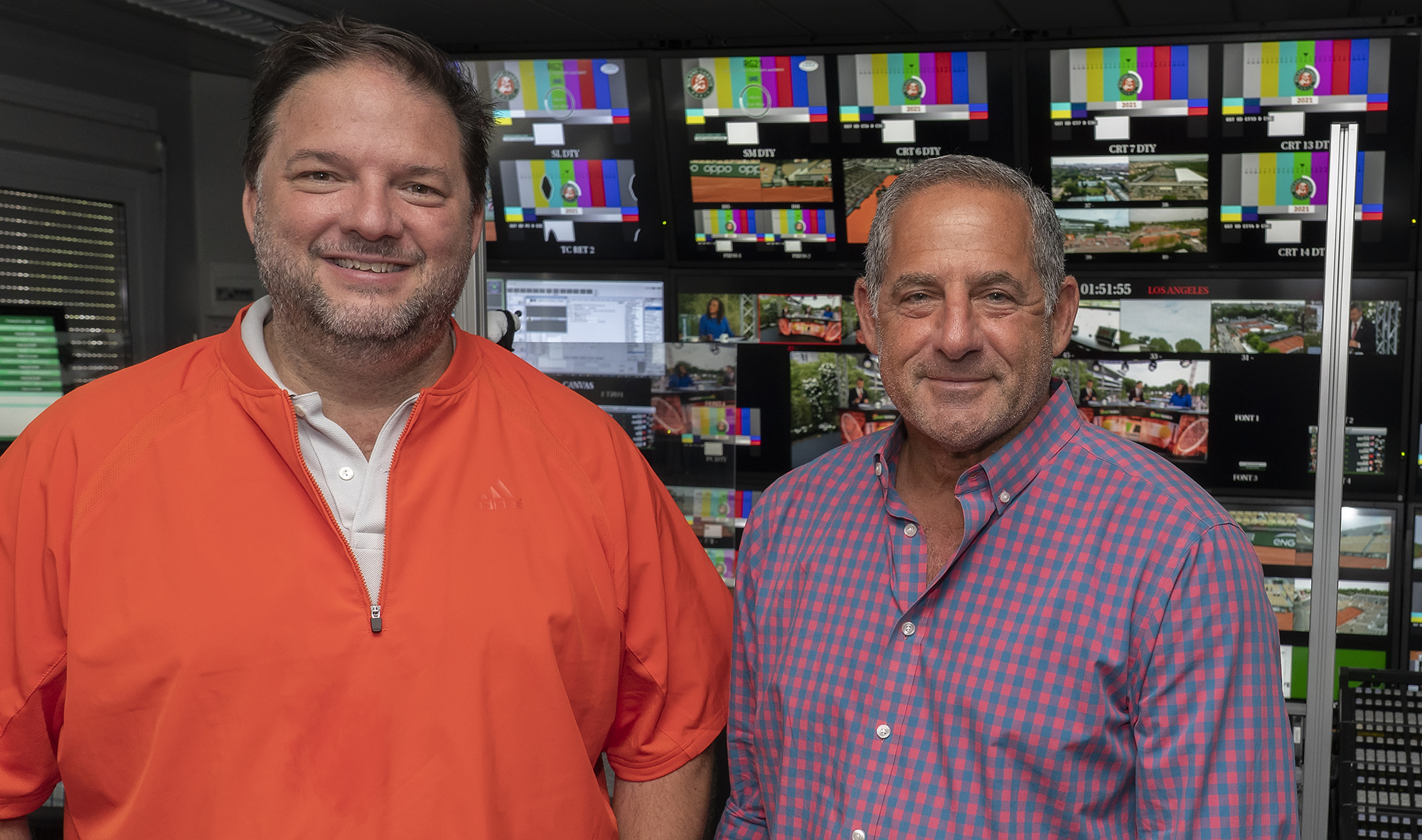 After splitting its crew between Paris and its new Exposition Blvd. facility in Los Angeles last year, roughly 75% of the production team is onsite this year at Roland Garros, including all commentators. In terms of safety protocols, Executive Director, Remote Ops, Rob Flores set out a strict set of health and safety guidelines in October, and Tennis Channel continues to follow them seven months later.

“As Dudley Moore said in Arthur, ‘Feels great,’” Whyley says about being back onsite. “Paris and Roland Garros is our second home. There is a sense of normalcy, and that’s a good thing.”

Tennis Channel has once again tapped long-time partner PRG to engineer and maintain its technical infrastructure at Roland Garros. 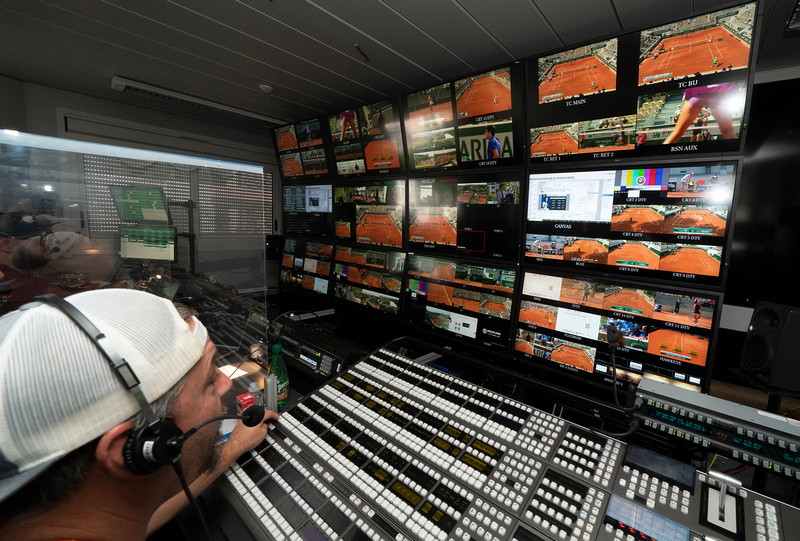 About 75% of the Tennis Channel crew is onsite in Paris this year.

“PRG’s build-out this year has been flawless,” says Whyley. “[That] needs to be said [because it’s] not easy to have a facility this size in Paris, [since] the country just opened back up on May 15.”

Although a larger crew is onsite, the Exposition Blvd. facility continues to play a major role in Tennis Channel’s French Open operation. In addition to housing all postproduction and editing, the L.A. facility is also being used to produce French Open feeds for the newly rebranded Bally Sports regional networks (owned by Tennis Channel parent Sinclair Broadcast Group). Throughout the first nine days of the tournament, the RSNs have access to an exclusive feed of second-court matches in Paris (8 a.m.-noon ET), produced at the Exposition Blvd. facility. 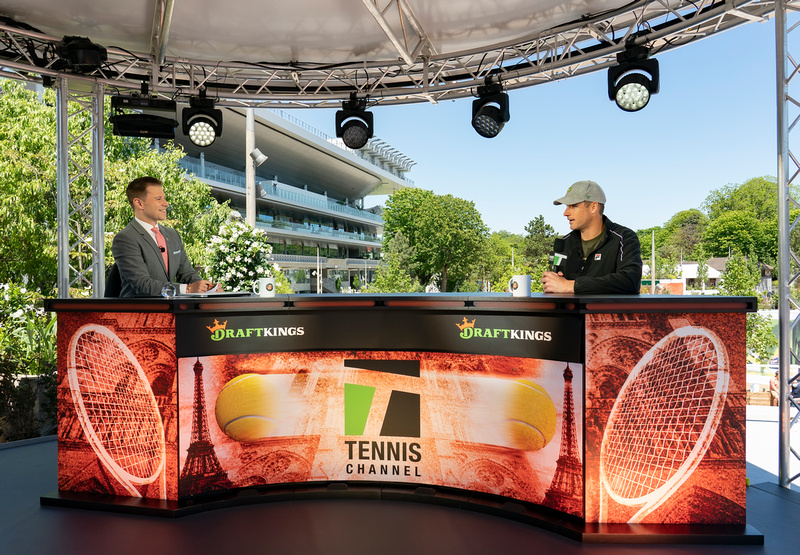 Tennis Channel is also delivering first-ball-to-last 4K coverage for all center-court matches from Philippe Chatrier throughout the tournament.

Tennis Channel brought a handful of toys to Paris, including a new multi-camera set and a new gimbal stabilizer on its roving RF camera rig. The new set serves as home to Tennis Channel Live at Roland Garros hosted by Steve Weissman, Jon Wertheim, and Chanda Rubin, and the new gimbal-stabilized RF rig provides Tennis Channel with shots from throughout the Roland Garros grounds.

“We are excited about our brand-new set right in the heart of Jardin des Mousquetaires, where we recap the big stories of the day and then set up the marquee night match-up,” says Whyley. “And we’re having fun with our new gimbal stabilizer with our RF rig”