The 2020 UEFA European Football Championship was always going to be a challenge. 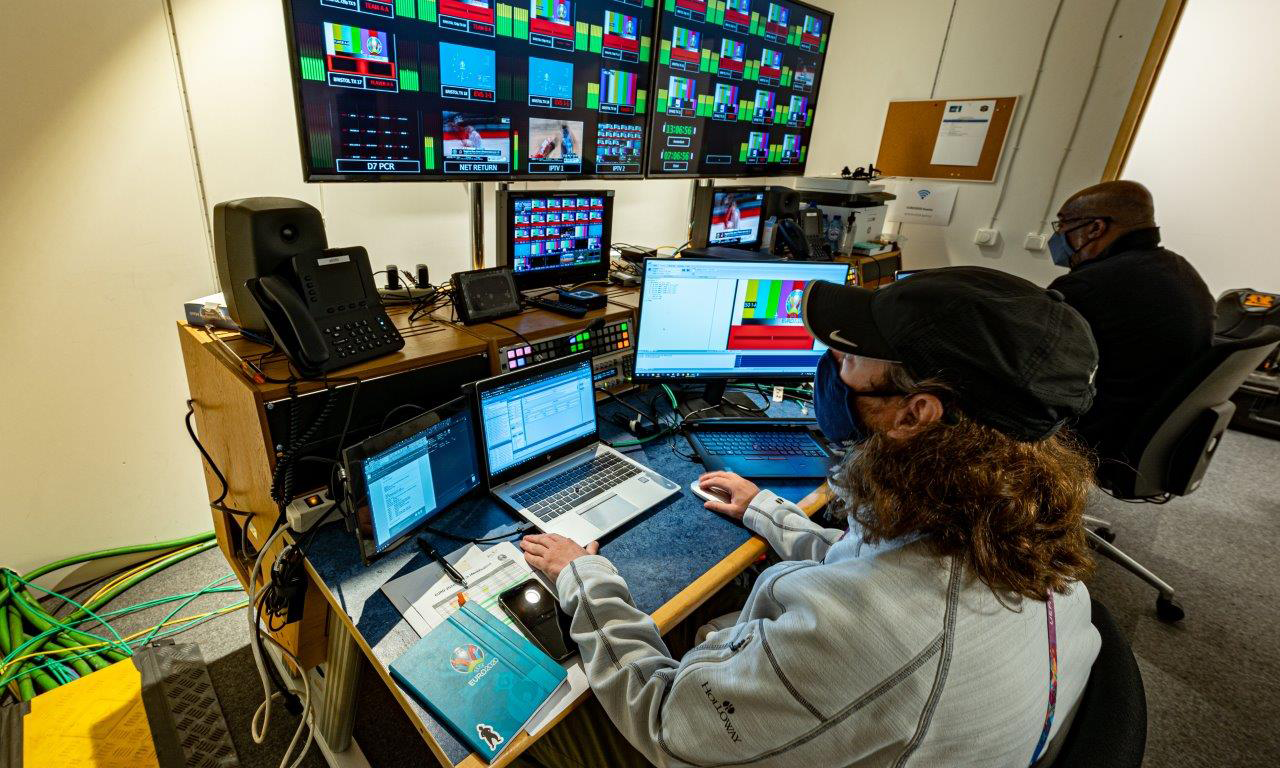 With much of ESPN’s production efforts housed in Bristol, an ESPN contingent, headed by Senior Remote Operations Specialist Claude Phipps (back right), is providing critical support at the Euro 2020 IBC at the Expo Center in Haarlemmermeer, Netherlands. (Photo: ESPN)

Long before COVID-19 ravaged the globe and postponed the world’s largest soccer tournament this side of the World Cup, the 2020 edition of the EUROs were primed to be the most ambitious in its 60+-year history.

For the first time, there wouldn’t be a single host city. Instead, there would be 11 stadiums in 11 host cities ranging from Seville, Spain, to Baku, Azerbaijan.

In 2014, UEFA decided to make the 2020 edition of the Euros a transcontinental affair. Since then, Brussels fell out of the running due to an inability to complete its primary stadium, the event was postponed a full 12 months by the pandemic, and numerous host cities have been shuffled because of continued COVID-related spikes and restrictions.

Long story short, an event for which broadcasters seemed to have sufficient time to plan for has taken a lengthy list of twist and turns. Now, four days into the tournament, ESPN (the U.S. broadcast-rights holder) is finding its footing in delivering the month-long, 51-match mega event, deploying a strong studio presence at its home campus in Bristol, CT; limited onsite crews at the IBC in the Expo Center in Haarlemmermeer (just outside Amsterdam); and additional operational spaces in London.

“As a company,” says John La Chance, director, remote operations, Euros campaign, ESPN, “we’ve been set up for major live remote productions since the onsite of the pandemic in order to provide highly safe work environments. Originally, we had a more significant number of U.S.-based personnel projected to work out of the IBC; it was the smart and sensible decision by our collective team to establish less of a travel commitment and keep many key positions stateside.”

At the IBC, the heart of the tournament’s broadcast activities for UEFA’s host match broadcaster and the numerous domestic rightholders across the globe, ESPN is hosting its central distribution point for all audio, video, and data signals transmitted from each of the match venues to Bristol. 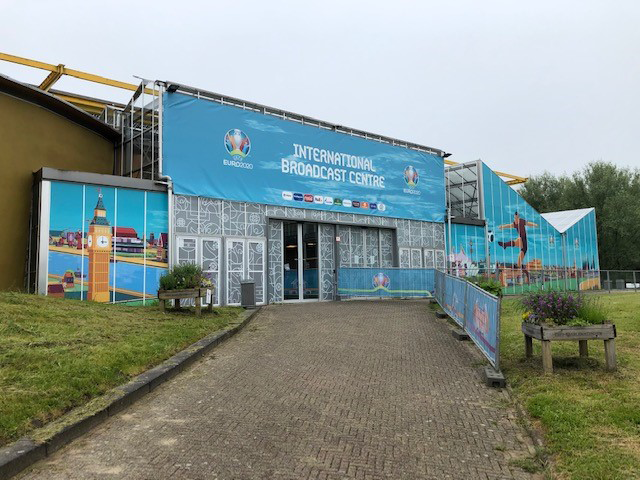 UEFA is hosting the Euro 2020 IBC at The Expo Center in Haarlemmermeer, just outside Amsterdam. (Photo: ESPN)

“It’s a massive amount of connectivity to ingest, service, then convert to our appropriate format standards prior to safely migrating all those signals back to Bristol for final integration into ESPN’s telecast line-up via dedicated/redundant MPEG4 circuits,” says La Chance.

ESPN Senior Remote Operations Specialist Claude Phipps is among the leadership team at the IBC for ESPN. A veteran of the network’s global soccer operations, he is jokingly described by ESPN VP, Production, Amy Rosenfeld as the “mayor of the IBC.” He is executing much of the network’s complex remote-operations plan and serves as a key liaison between ESPN and UEFA as well as with numerous other rightsholders from across the globe.

A major feature of UEFA’s IBC operations this year includes what the organization is calling “The Hive.” A massive EVS-based server system and media-asset–management system, The Hive is a repository of thousands of hours of content for this year’s edition of the Euros, as well as an archive of the event’s history accessible remotely by all rightsholders.

Says Ristine, “To facilitate access and availability to The Hive content (as well as match content gathered via EVS XT servers at the IBC), we have built a robust content-management and file-transfer workflow to transcode content into the proper format and deliver to Bristol quickly.”

He adds that the network has producers in Bristol using remote EVS IP Directors to browse clips and initiate the transfer. It essentially automates ESPN’s deployment of the system at the IBC.

“The server-based media-asset–system opportunities for this tournament have grown and grown,” says La Chance. “We’ve built a rather robust remote file-transfer platform to allow ample choice for the talented production team back in Bristol to select from.”

The collective team in country will be extremely busy, overseeing off-tube commentary facilities in London’s IMG Studios in addition to the expected 2,000 hours of “packaged” content to be produced through the IBC. Total production — all feeds, additional programming, all raw material — is expected to exceed 3,500 hours.

In addition to all the support at the IBC and in Bristol, ESPN has set up additional operational facilities in London as part of its backup protocols.

According to La Chance, who is working from the London facility, ESPN’s tech team has “architected a complete turnkey remote workflow, which will allow the continued support of all those audio/video/data signals stemming through the IBC operation from an in-country control room (located at the crew hotel) in the event of a temporary shutdown due to COVID or unforeseen challenges at the IBC.”

The workflow includes extending ESPN’s network for operational and production support and, in addition, extends all of Gravity Media’s monitoring and quality-control–network support.

ESPN’s coverage of the 2020 UEFA European Football Championship continues Tuesday with Hungary-Portugal at noon ET and France-Germany at 3 p.m., both on ESPN. The final is scheduled for Sunday, July 11 at 3 p.m. on ESPN.