Since debuting in 2009, MLB Network’s broadcast center in Secaucus, NJ, has served as the home of the MLB Draft. After a trying year that saw the league’s inaugural virtual Draft, MLB Network is celebrating the first-ever production of this event during All-Star festivities within a packed onsite production truck, remote workflows from multiple control rooms at headquarters, and remote video feeds from individuals who are enjoying this noteworthy achievement away from Denver’s Bellco Theatre.

“We’ve been going on surveys every year for the past six to seven years in anticipation of one day doing this onsite,” says Susan Stone, SVP, operations and engineering, MLB Network. “We’re really thrilled that we can finally see the fruits of everybody’s labor. We think it’s a great opportunity to further showcase this event.” 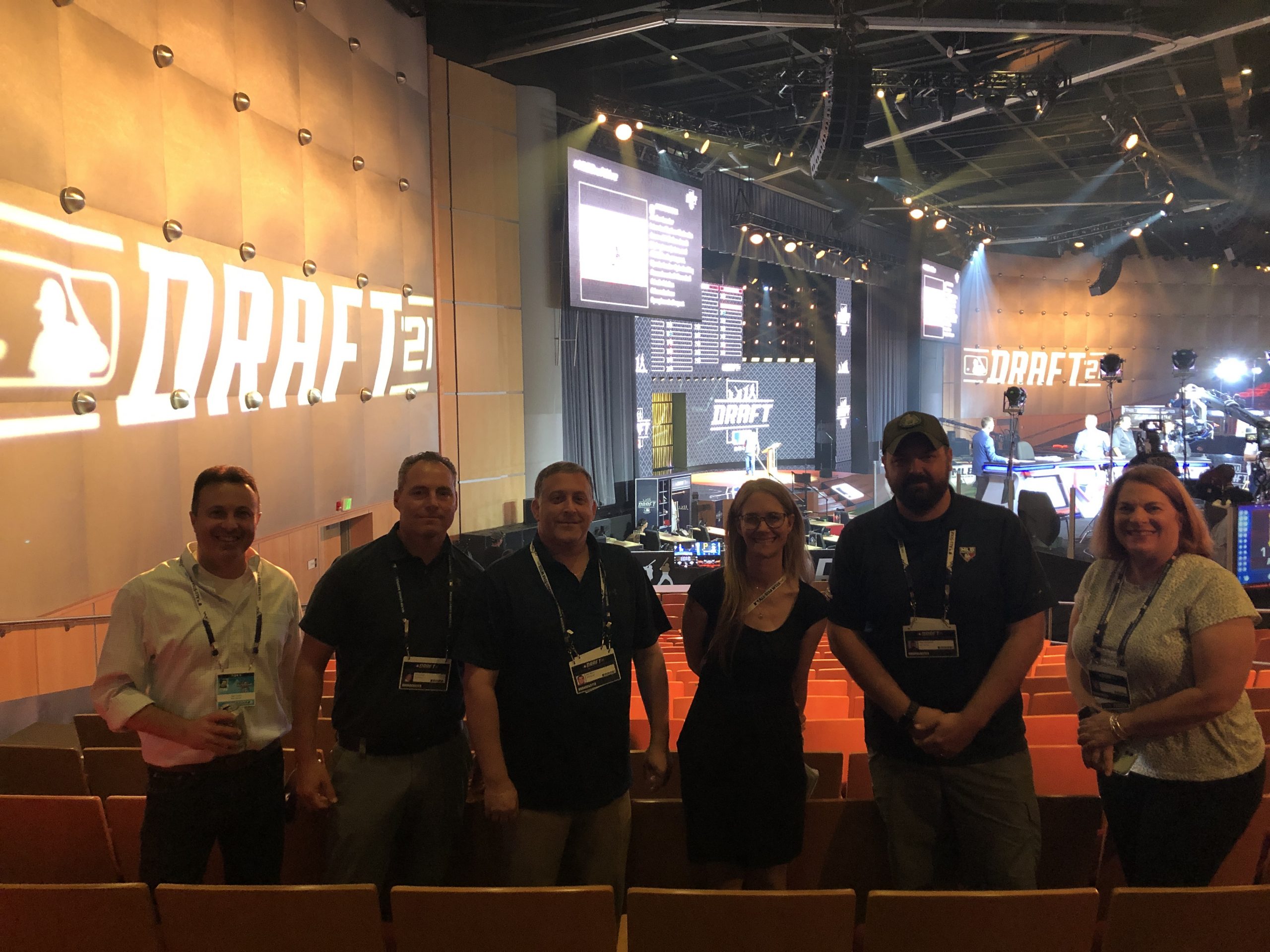 From the onset, this event was originally slated to be held in Atlanta, but, when the league decided to move away from Atlanta in favor of Colorado’s biggest city, the team began finalizing plans for the move. Onsite surveys were conducted in Denver as recent as May and June of this year to understand the current layout. Located about a mile from Coors Field inside the Colorado Convention Center, the Bellco Theatre will house the introduction of the next great wave of professional baseball talent to fans around the nation.

Outside the Colorado Convention Center, MLB Network’s onsite crew will be working out of the A and B units of Game Creek Video’s Glory production truck. This team will control the 10-camera show (two hard cameras, two jibs, two RF handhelds, and a quartet of Marshall POVs). For Days 2 and 3, when the Draft moves to the nearby Rally Hotel, Game Creek Video’s Nitro will play a vital part.

Lumen Vyvx is the trusted transmission services provider for this year’s Draft at the Bellco Theatre, The company will also provide the transmission of Monday’s Home Run Derby and Tuesday’s All-Star Game.

Although a lot of headlines will focus on the efforts of Stone and company in Denver, the crews working in New Jersey will be more than busy, facilitating a handful of resources for the linear broadcast. From a logistical standpoint, some of these video assets would be an extremely heavy lift to reconstruct onsite in Colorado.

“We’ll be going back to New Jersey for remote player cams, graphics packages, player rollouts, and other elements like that,” says Jason Hedgcock, senior director, remote technical operations, MLB Network. “All of those things is a firepower that’s hard to replicate [onsite], so it’ll help our show quite a bit.” 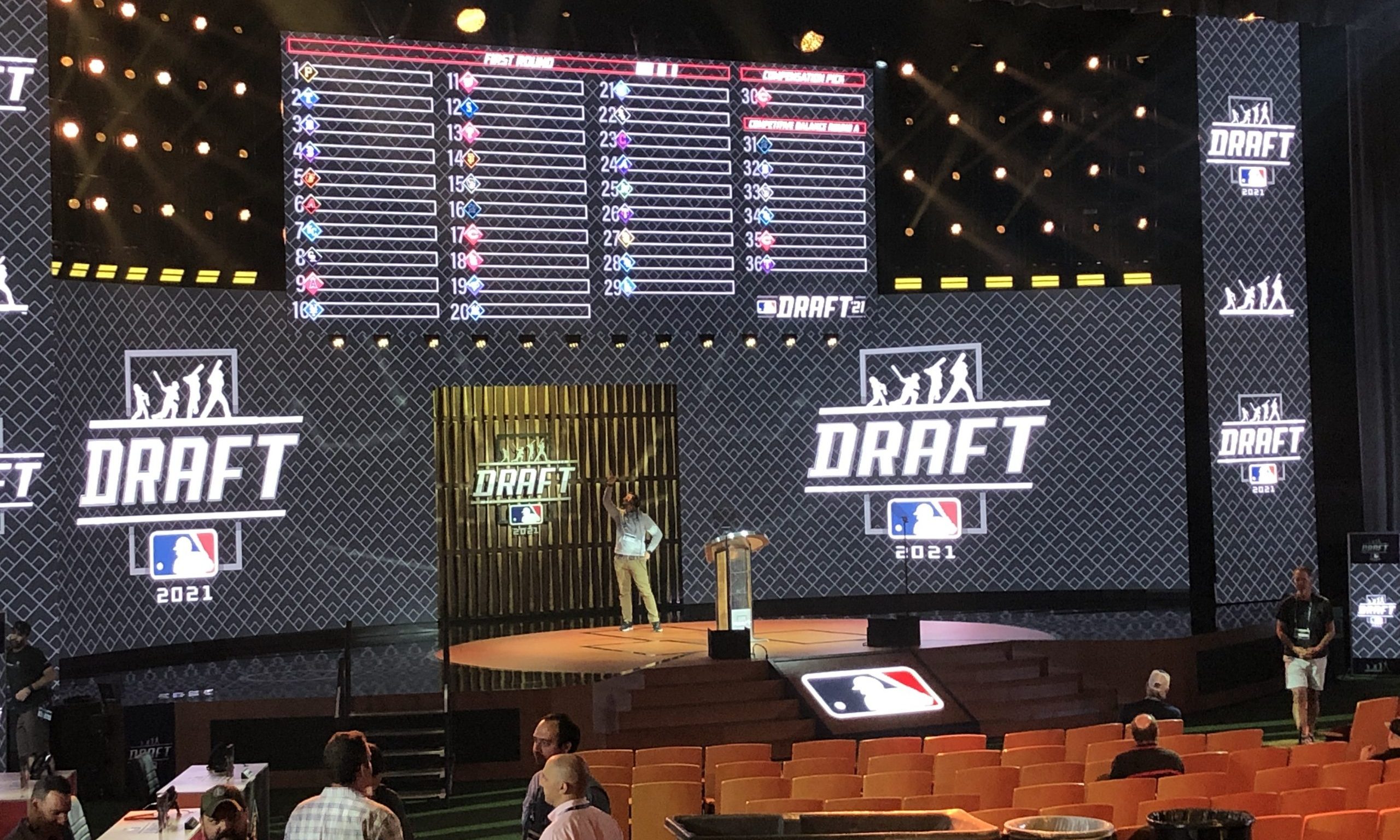 The main stage for the 2021 MLB Draft

The most familiar aspect coming from New Jersey will be the remote feeds deployed during the completely remote show last year. BitFire Networks will once again provide 45 camera feeds, including 15 prospects from their respective locations and general managers and other executives in the war rooms of all 30 clubs. These remote feeds and video from six of MLB Network’s cameras will also be given to ESPN’s onsite production of the Draft.

“We worked with them last year for the virtual Draft and had a really good experience,” adds Stone. “It was great because it led into the season during the pandemic, where we had to partner more closely with all of the other broadcasters.”

In addition to the Nitro truck, the crew in Secaucus will be the main cog in the effort for Days 2 and 3.

“Day 2 and 3 will be a direct REMI: we’ll send back cameras with individual mic sources,” Hedgcock explains. “[The offsite team] will use one of the overdrive rooms in New Jersey to composite that show.” 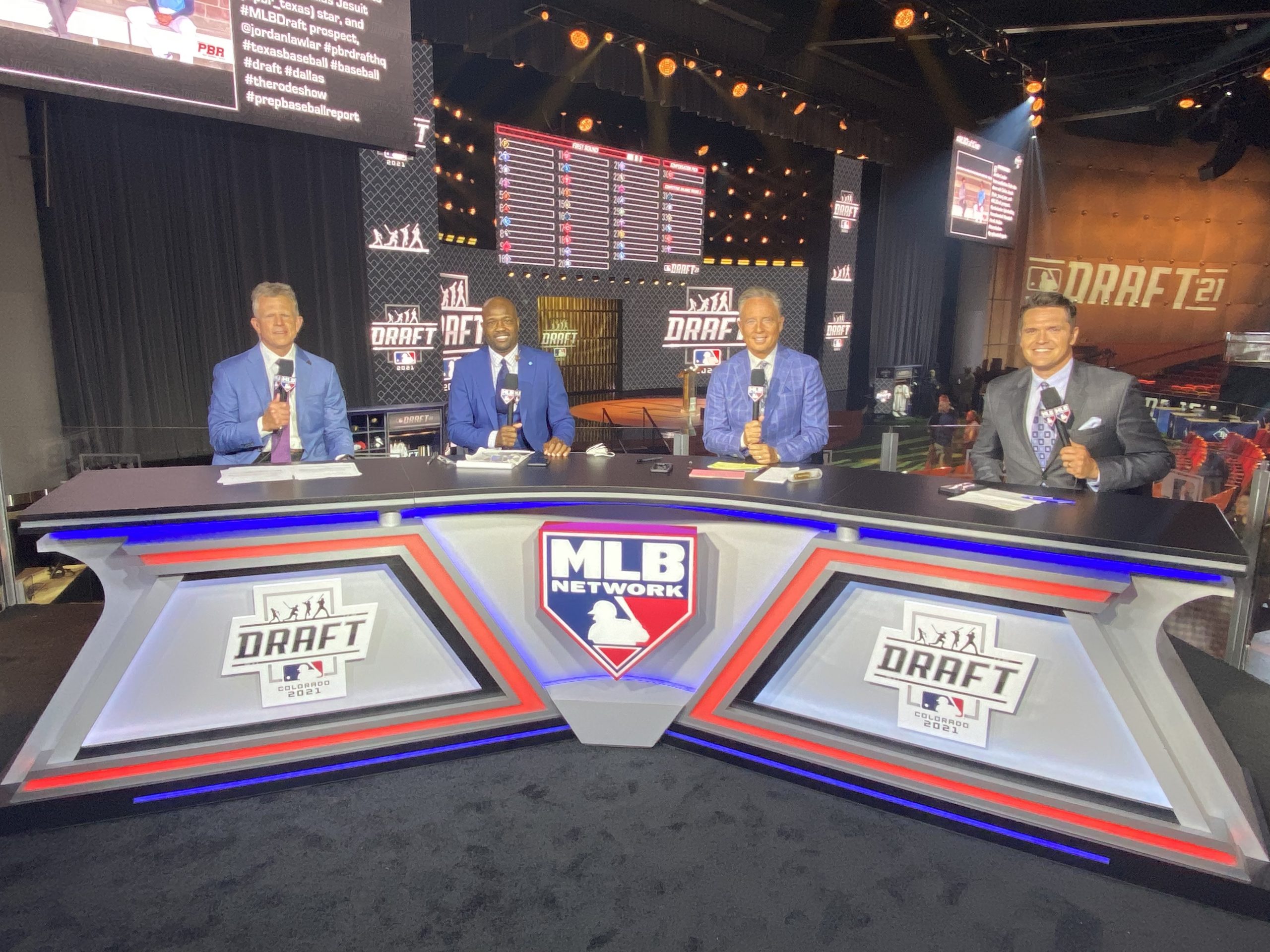 For the MLB Draft, MLB Network will have a studio set inside the Bellco Theatre.

With a bigger footprint inside Bellco Theatre, MLB Network and the league constructed an attractive physical stage, allowing the draftees in attendance to experience this unforgettable moment with Commissioner Rob Manfred. Similar to last year, this i