It’s been an awfully busy week for the National Hockey League.

First it was Tuesday night’s first-of-its-kind standalone live broadcast of the Expansion Draft for the league’s newest franchise: the Seattle Kraken. Now, this weekend, clear across the country in Secaucus, New Jersey at the broadcast facilities of the NHL Network, it’s on to the 2021 NHL Draft. 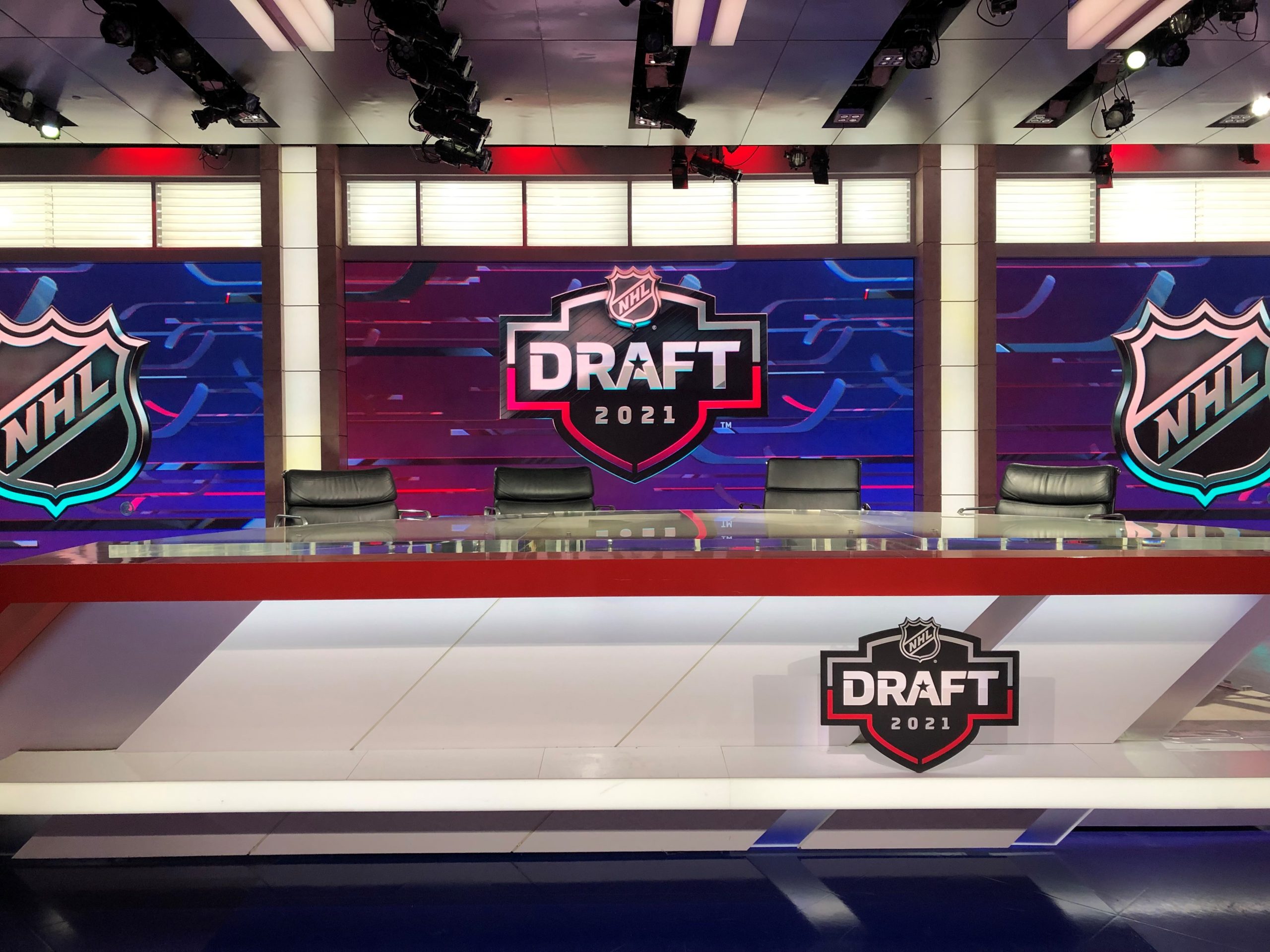 So much for the “offseason.”

Round 1 is Friday beginning at 8 p.m. ET airing on ESPN2 in the United States and Sportsnet, SN NOW, and TVA Sports across Canada. Rounds 2-7 pick back up on Saturday at 11 a.m. ET on NHL Network in the US and Sportsnet and SN NOW in Canada.

This NHL Draft is perhaps one of the most challenging and comprehensive events that the joint production/operations team at NHL Network and MLB Network haven taken on. Not only will three studios supported by four control rooms be fired up for the two days of live programming, but more than 100 live video feeds will be funneling into the facility and on to air from the 32 team headquarters, 45 player prospects homes, and other sources.

On the air, the production will also reflect the changing face of the league’s American television market. Talent from ESPN, Sportsnet, and NHL Network itself will all anchor the show in a collaborative production that all broadcast networks will carry.

“It’s a very different take on the Draft versus where we were last year,” says Eric Eisenberg, VP, Programming and Operations for MLB Network and NHL Network. “Last year we were producing a world feed on Day 1 that the broadcast partners were able to utilize and change. This year we are working together with everyone to create one broadcast which has, in some respects, changed how we are doing things but has engaged our production team even more to be involved in the creative side.”

For the second consecutive year, BitFire Networks is being utilized to manage all of those external feeds. The vendor has shipped servers to all 32 team headquarters and is offering up its browser-based FireBridge solution that makes it easy for NHL Network to send links to prospects that leverage the cameras within the smartphone or laptop of the players’ choosing.

These are all elements that the production and operations crews at MLB Network and NHL Network were more than up to the task for a year ago. There was plenty of uncertainty traveling into uncharted waters when MLB Network hosted its first fully virtual event with last year’s MLB Draft and last year’s NHL Draft was the first time they utilized the Bitfire Networks workflow. This year, after many months of proving out these methods, there’s a whole new level of confidence going into this weekend.

“There was a level of terror into the first [virtual MLB] Draft that we did in 2020,” admits Susan Stone, SVP, Operations & Engineering at MLB Network. “We had incredible support at the time from MLB technical services department so that every event that we did gave us more confidence. We’re in a place now where we know what to expect, we know what the best practices are, and we’re ready to go out and deliver the best product that we can.”

“Our confidence level is way higher than last year,” agrees Steve Mayer, the NHL’s Senior EVP and Chief Content Officer. “We’ve done a Draft, a Draft Lottery, and hundreds of shows, both internally at the NHL and at NHL Network, with this virtual equipment. We’ve seen it evolve and seen it look pretty good.”

Much of that confidence comes from the comprehensive work put in by members of the MLB Network/NHL Network team like Vice President, Engineering & IT Jake Soto; Director, Studio Engineering Curt Bose; Director, Studio Operations Michael Herbert; Manager, Studio Technical Operations Tony Giner to tie up and test out all of the various feeds and delivery mechanisms.

In addition – as anyone who has worked on a Draft of any kind will tell you – so much of the success of a live draft broadcast comes in the weeks- and months-worth of work building b-roll video and graphics packages. The edit team of Senior Director, Production & Strategic Planning Will Cope, Manager Matt Ciancimino, and Segment Producer Mike Dello Stritto has churned out a load of on and off the ice content to prepare the on-air crew and front bench for as many possible Draft Dat scenarios. And it’s critical to the overall storytelling process.

“Unlike other some other sports, a lot of our fans don’t know these players,” says Mayer. “We know that. For some, this is the first time they are going to see or hear highlights of their guy. When somebody does get drafted, what can we tell the audience about this player and what are those nuggets that they will take away? We push our PR team to find those bits of information that will bring these kids to life.”

On the NHL side, the network folks also praised the league’s VP, Arena and Event Operations Dan O’Neill for keeping the overall the overall project on point.

“Dan is a great partner,” says Stone. “He is so detailed and organized. He keeps us all on track and focused. Everything is so much easier when you have a partner like that to work with.”

After these back-to-back years of “virtual” drafts, the NHL has ambitions of returning to live arenas as soon as next year. In 2022, the event is slated to be hosted at the Bell Center in Montreal. Despite the successes of the past two years, it’ll be a return to normalcy that many involved in the production will welcome with open arms

“It is way easier to build an amazing set with ten LED screens, and sell tickets, merchandise, and food in an arena and know that you are going to get a great show than doing it this way,” laughs Mayer. “There’s so many feeds coming in and it’s so much technically to be on top of. This is a big production when you think of the amount of cameras and feeds. We’ve all been in a place where if something doesn’t work, we’ll figure it out. If for some reason a feed goes down, we’ll announce a picks and we’ll be just fine. We’re super confident that we’re going to have a really great show. The team at NHL/MLB Network is just amazing.”

There are, however, elements of this style of draft that the NHL Network and MLB Network crew will actually miss when things return to live arenas in 2022.

“This [workflow] is taking us inside the homes of the players,” says Eisenberg. “It’s not them sitting in the arena. It’s their homes with their family and friends around them. You get to see the natural joy and celebration of the hard work. It’s been cool to be brought behind the curtain and the technology allows the viewers to benefit from seeing that. That’s what sports is all about: its emotion, it’s passion. I think that part is very cool.”