In a famous scene at the end of the film Field of Dreams, as Kevin Costner’s Ray Kinsella plays a long-awaited game of catch with his late father, the audience is flown above the field to reveal a long ribbon of car headlights. Cars full of people coming to watch the spirits of baseball’s greats play on the freshly built diamond in Eastern Iowa.

“People will come, Ray. They will most certainly come.” 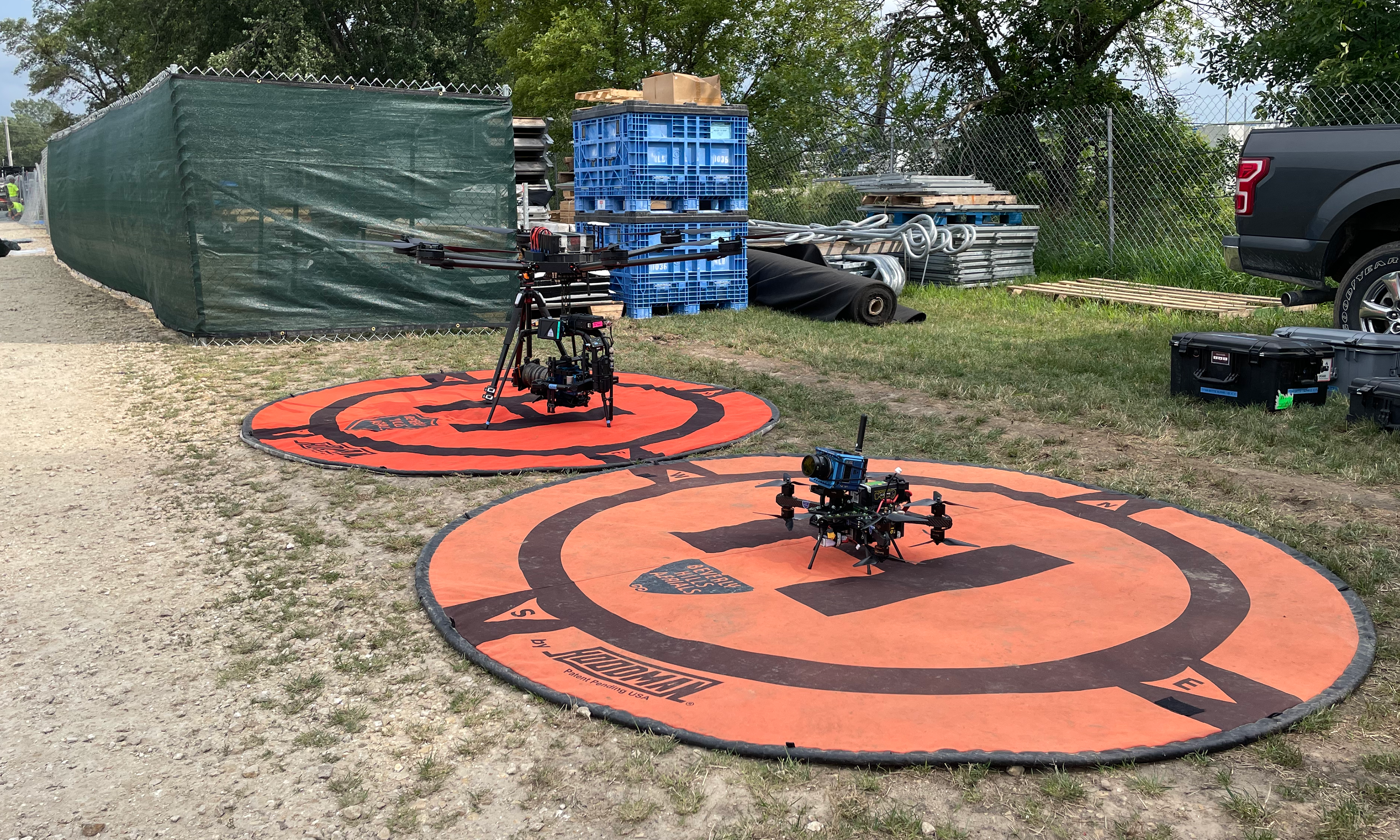 Beverly Hills Aerials is deploying both a large heavy-lift drone (left) and a smaller, faster FPV drone to deliver spectacular images from above for Thursday night’s broadcast of the MLB at Field of Dreams game on Fox.

To achieve that image in the summer of 1988, when the film was made, legendary cinematographer and camera operator John A. Stephens literally had to hang out the side of a helicopter flying above the scene in a high-stakes game of “you better get this shot.”

Fortunately, when Fox Sports broadcasts a Major League Baseball game from the site of the classic sports movie on Thursday evening, a camera operator won’t be put at risk in a death-defying stunt. Instead, the broadcaster is deploying contemporary technology — from drones to cabled aerial camera systems — to deliver images never seen on the live broadcast of a MLB game.

The operations and engineering teams at Fox Sports are thrilled by the addition of live drone coverage, a production enhancement they’ve never used on a live MLB game before.

“You can do things here that drones normally wouldn’t be able to do,” says Brad Cheney, VP, field operations and engineering, Fox Sports. “This isn’t Yankee Stadium; there’s nowhere to go at 161st Street. There are some definite wins here for us in having [these aerials].

“When you hark back to the movie,” he continues, “some shots they were able to do took so much time and effort. Now we have this technology — drones — that allows us to re-create that immediately and live.”

Three drones are available for the live game broadcast. Fox Sports is working with the team at Beverly Hills Aerials, which provides the technology and the pilots. The broadcaster has worked with BHA in the past on such events as the Daytona 500.

Two of the drones are heavy-lift models designed to fly slower and higher for more-graceful scene-setting shots. The third, an FPV drone, has a much smaller form factor and can travel at speeds of 80-99 mph.

“As a creative that wants to paint an image, you can’t use the same brush for every stroke,” says Michael Izquierdo, chief pilot, Beverly Hills Aerials, who has been flying FPV-style drones for about seven years. “It’s really nice to use both [types] based on what [the broadcaster] wants to get on-air. Each drone is its own special tool, and we are firm believers in always using the right tool for the shot.”

Since Fox is going for a cinematic feel, the team at Beverly Hills Aerials is using “cinema” cameras on its drones for the first time for live coverage of a sports event. All units are outfitted with RED KOMODO 6K cameras. Eight Beverly Hills Aerials staffers are in Dyersville, and Bryan Cheney also is serving as a pilot.

Another gorgeous aerial shot that viewers will see serves the critical role of connecting the field from the original movie to the stadium that MLB has constructed for the game between the Chicago White Sox and New York Yankees.

A two-point aerial camera system from FlyCam runs a staggering 1,429 ft. (about a quarter of a mile). Piloted by FlyCam co-founder J. Patrick Hally, the main rig carries a Sony P50 camera shooting in 4K and HDR. 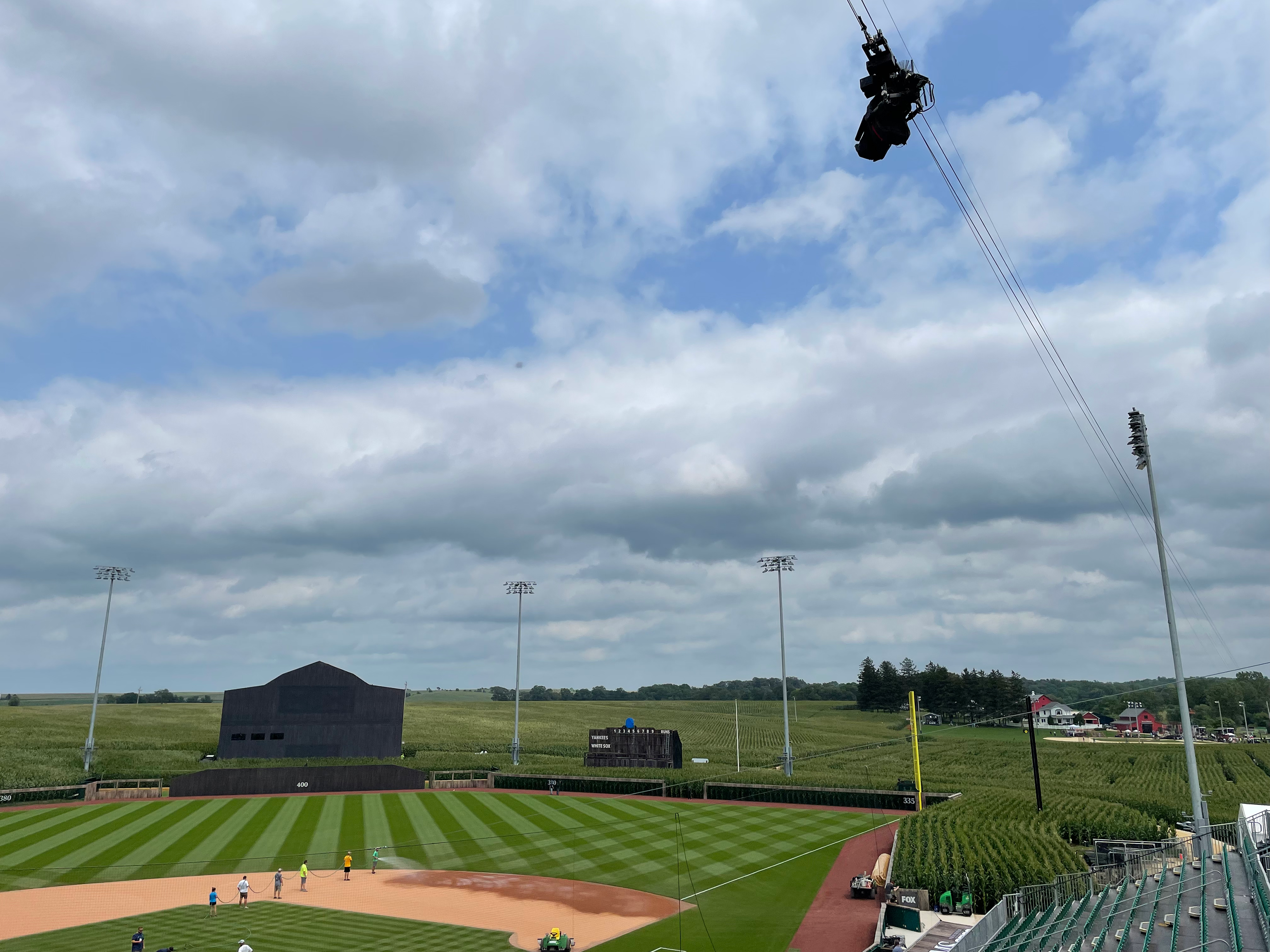 A two-point aerial camera system from FlyCam spans nearly a quarter of a mile to connect the new MLB field with the Field of Dreams movie site.

These aerial visuals are key to Fox Sports’ strategy for broadcasting this game. Since the goal is a classic, traditional feel in celebration of the film and the sport’s heritage, there was less of a desire to deploy futuristic graphics and elements. Super-high-resolution imagery from spectacular angles is the name of the game.

“If this was the All-Star Game or the postseason, you’d throw all the tech at it,” explains Michael Davies, SVP, field operations, Fox Sports. “That’s not this kind of game. We’re using the technology to make this seem more like a movie. We looked at tools that could help us make this a more dramatic event.”

There are plans for a fixed-winged aircraft to fly over the site if weather permits. The team at WingedVision is supporting that effort, and Sports Broadcasting Hall of Famer Bob Mikkelson is a part of the crew on board.