It will be a beautiful blend of the past and the future on Thursday night as Fox Sports delivers a special, 4K HDR live production of the MLB at Field of Dreams game between the New York Yankees and the Chicago White Sox (7 p.m. ET, Fox) from the famous Field of Dreams movie site in Dyersville, IA. 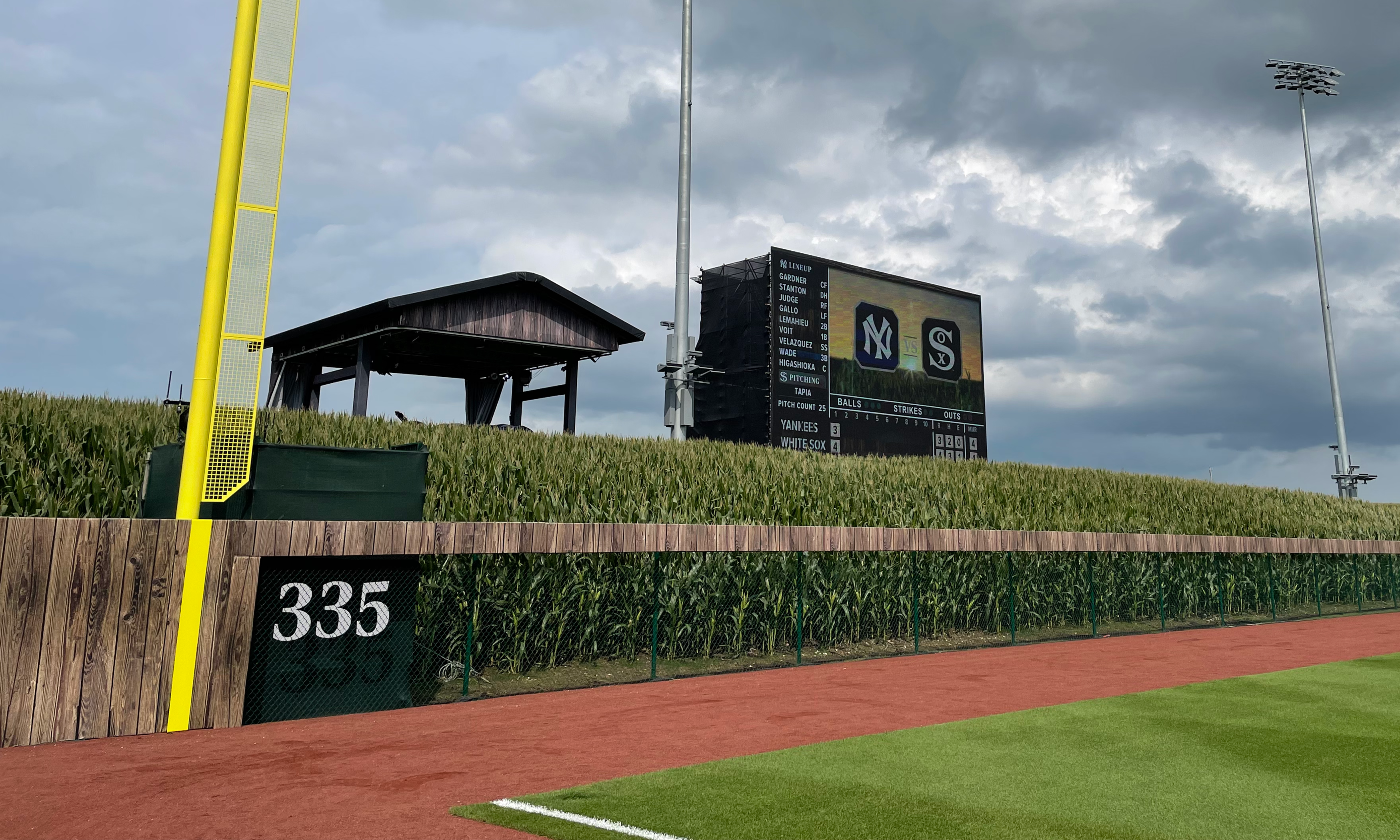 Fox Sports will broadcast the MLB at Field of Dreams game between the New York Yankees and the Chicago White Sox on Thursday evening.

At a new field constructed by Major League Baseball just for this game, Fox Sports has deployed a crew of more than 240 people and an arsenal of nearly 40 cameras, 50 microphones, and a commitment to deliver this game in a “cinematic” way that promises to make it quite different from a typical broadcast.

“Yes, it’s a baseball game, but it’s more than that,” says Michael Davies, SVP, field operations, Fox Sports. “We want to make this like a movie. So we’ll use cinematic techniques to tell the story. If there ever was a made-for-TV type of event, this is it.”

Fox brass acknowledges that this is a unique broadcast for them. The broadcaster has a legacy of deploying flashy, futuristic tech for a big project. However, for an event so steeped in legacy, folks like Davies; VP, Field Operations and Engineering Brad Cheney; Director, Field Operations, Francisco Contreras; and Lead Tech Producer Tom Lynch wanted to integrate technology that would deliver a classical feel, rather than a futuristic one. 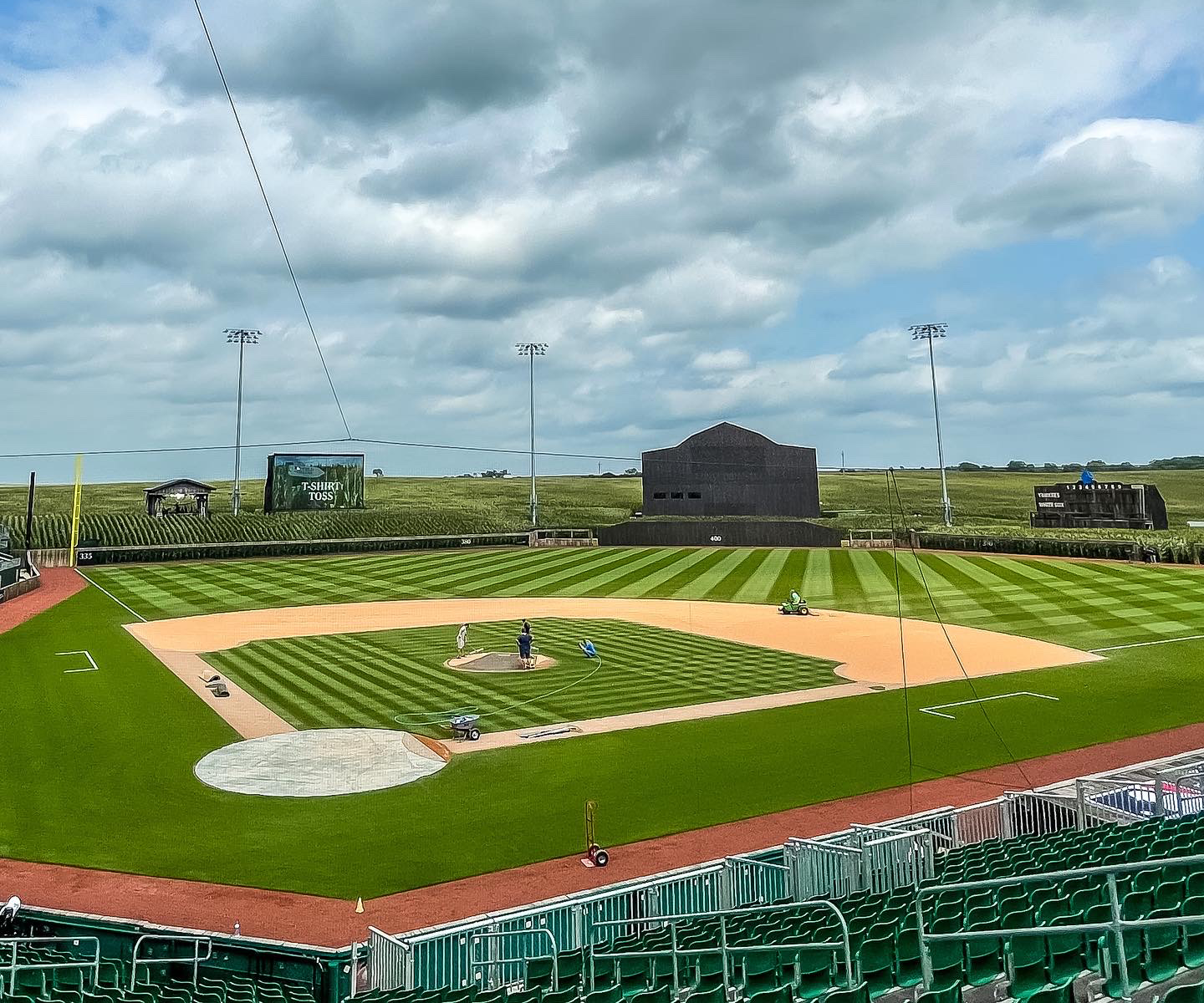 A total of 40 cameras and 50 microphones will cover the field built by Major League Baseball a quarter of a mile from the original Field of Dreams movie site.

“Normally, if this was the All-Star Game or the postseason, you’d throw all the tech at it,” says Davies. “That’s not this kind of game. We’re using the technology to make this seem more like a movie. We looked at tools that could help us make this a more dramatic event.”

Among those tools are drones (three supplied by Beverly Hills Aerials), a two-point FlyCam aerial camera system spanning the 1,429 ft. from the movie site to the MLB field, two shallow–depth-of-field Megalodons (each equipped with a mirrorless Sony A1 camera and transmitted to the truck by CP Communications), and a DirtCam buried just off the left-handed–batters box.

Also adding to the classic feel is an entirely new graphics package designed just for this event. Fox Sports EVP/Creative Director Gary Hartley and his team have created a package that doesn’t look at all like Fox’s usual MLB scorebug and insert graphics.

Although the game will be upconverted from 1080p HDR for delivery to homes in 4K HDR, the majority of the show will be captured by cameras shooting in 1080p, 4K, and even 6K (in the case of the drones provided by Beverly Hills Aerials). 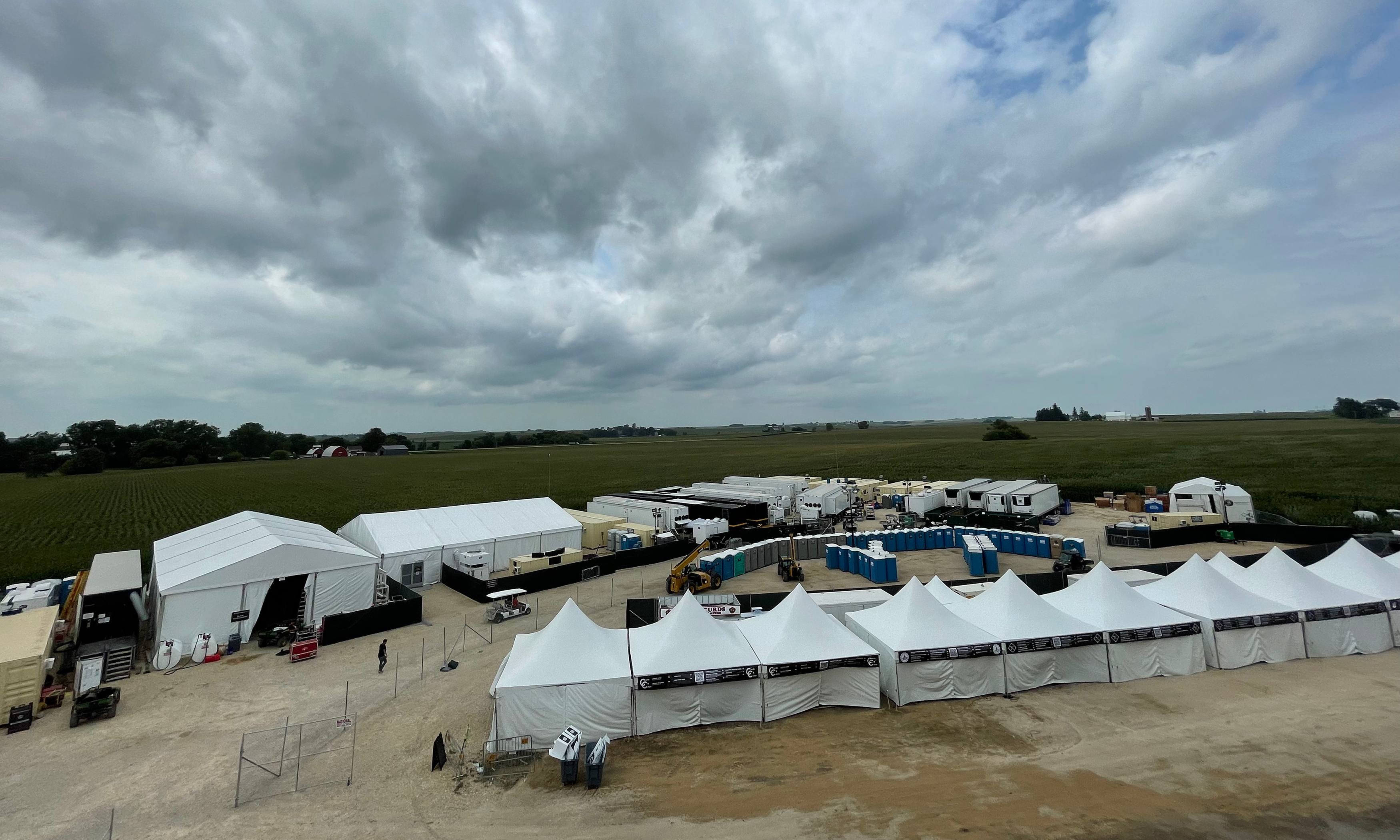 The production compound at the Dyersville site is anchored by Game Creek Video Encore and is located just off the third-base line of the MLB field.

Delivering in 4K HDR, Cheney explains, offers a cinematic look to begin with. “With the grass and the colors, you’re able to capture the contrast that 35mm film gives you. HDR gives you that same ability. I think that’s going to translate across, especially to the viewers watching at home on television. You’re going to capture the feeling of a movie with the crispness, the detail, and the contrast.”

To meet the challenge of this production, Fox Sports has brought in its top talent, including at the front bench of Game Creek Video’s four-truck Encore unit. The Emmy Award-winning tandem of Producer Pete Macheska, Director Matt Gangl, and Technical Director Paul Harveth is at the front bench. In addition, top A1 Joe Carpenter is overseeing the unique audio footprint.

Gangl joked to the Chicago Sun-Times that he lost track the number of times he has watched Field of Dreams in preparing for Thursday’s broadcast. He expects to direct the game in a much different way from his usual approach to a regular-season game. 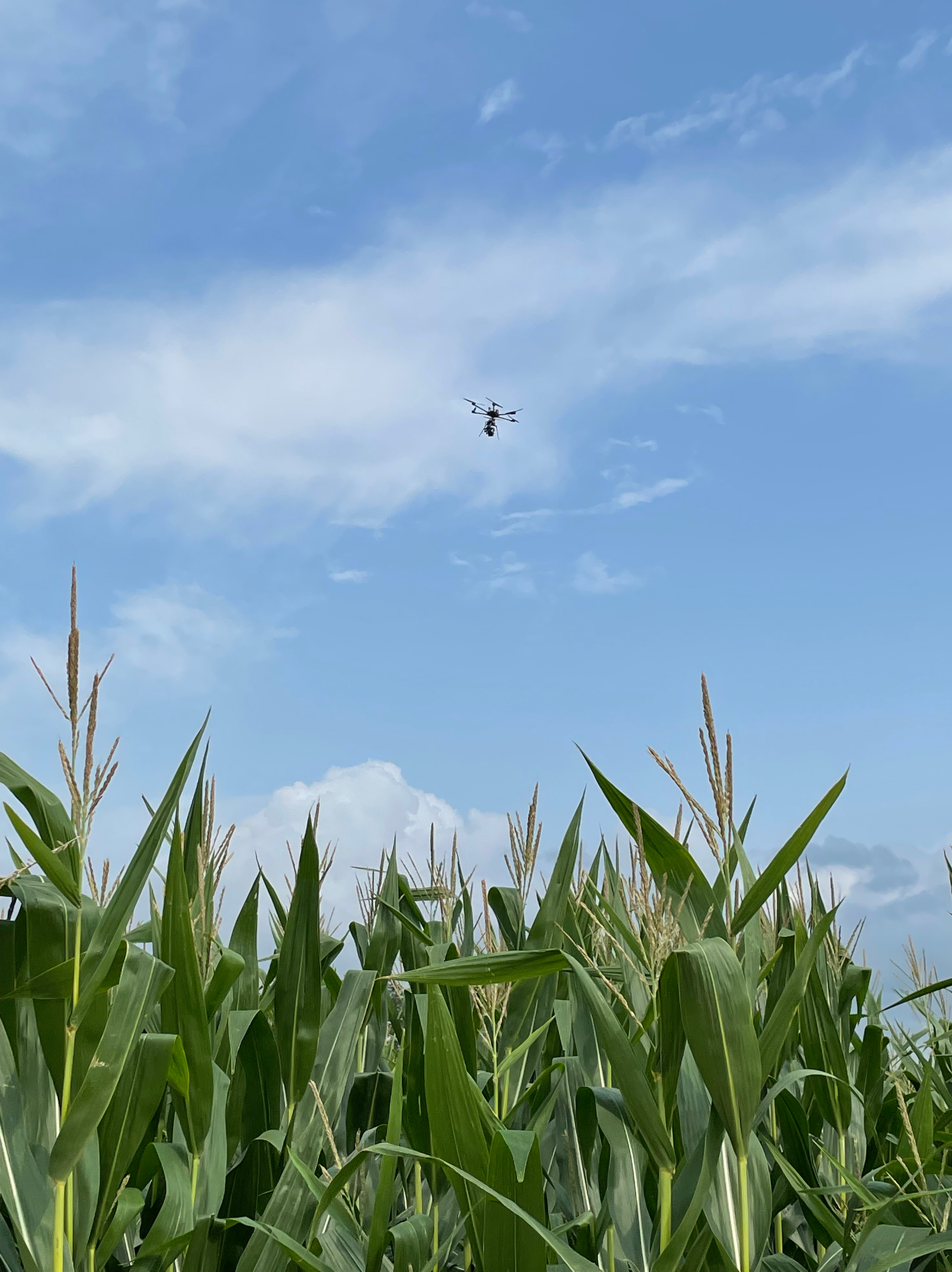 Drones and other aerial cameras will play a key role in the Field of Dreams broadcast.

“It is an interesting balance because everything we do as we move forward in sports television is advancing technology,” Gangl said to the Sun-Times. “More super-slow-mo, more big lens, higher-speed cameras. To me, it’s using those things in a way that is a little more cinematic than standard game coverage. As much as I love great tight shots, and we’ll find those emotion shots, I think there’s going to be a lot more resetting grander shots, sweeping motions, things that give us place and proximity of where this event is taking place.”

In addition, Cheney notes that he and Gangl took four trips to the Dyersville site over the past year and that, although production and operations teams plan together on a regular basis, there was a new level of creative collaboration for this project.

“We were able to find solutions together that each of us may not have thought up,” he says. “It’s a great process to be able to work together with Major League Baseball, walk into a place, say ‘This is what I want to do,’ and work together to find a way to make that happen.” 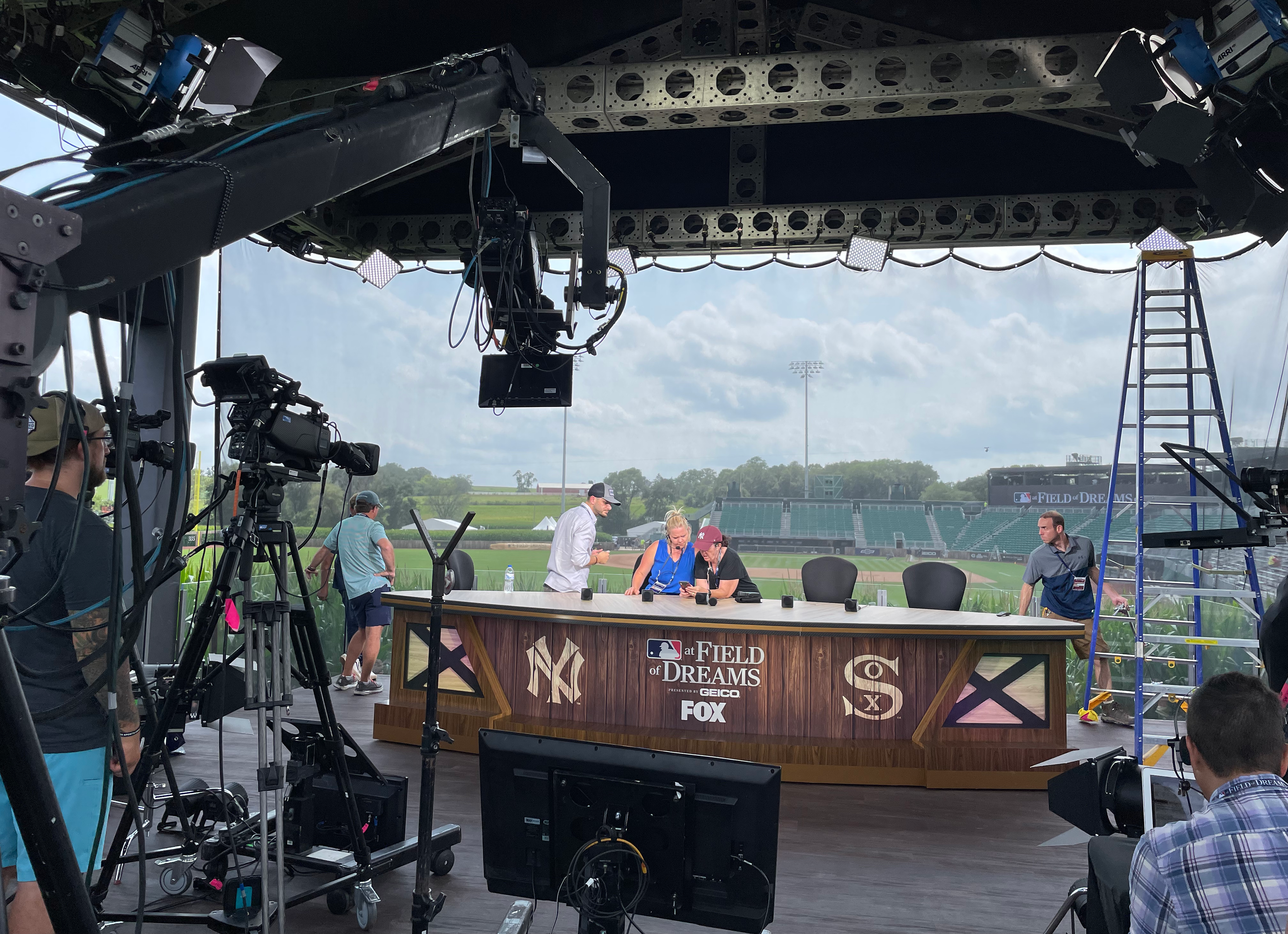 For pre/postgame coverage, Fox Sports has built a studio set positioned just over the left-field wall.

The studio team, headed by Fox Sports VP, Studio Operations, Rod Conti has delivered a design unique to this event. The pre/postgame set is located over the left-field wall amidst the stalks of corn. During the game, however, it will “aesthetically disappear.”

According to Conti, MLB wanted a clear outfield to add to the minimalist mystique of the game. To accomplish that, the studio set is wrapped in a drape that, when dropped, makes the set look like an inconspicuous wooden barn. The set was designed with support from Filmwerks, which has a team onsite assisting with the production.

Building this production structure at a location that had never hosted a major television broadcast was no small task. CAT Entertainment Services is powering the compound, and Fox and MLB worked with a local internet provider to bring a gigabit of high-speed internet to the site. That uplink was critical in allowing Fox’s The Vault in Los Angeles to contribute to the production, providing support for replay, playback, and graphics (studio and game).

For camera placement, Fox has deployed towers similar to those used in golf coverage. The desire to get higher above the stands, which are smaller than in standard MLB venues, invited some new ideas in terms of positioning. 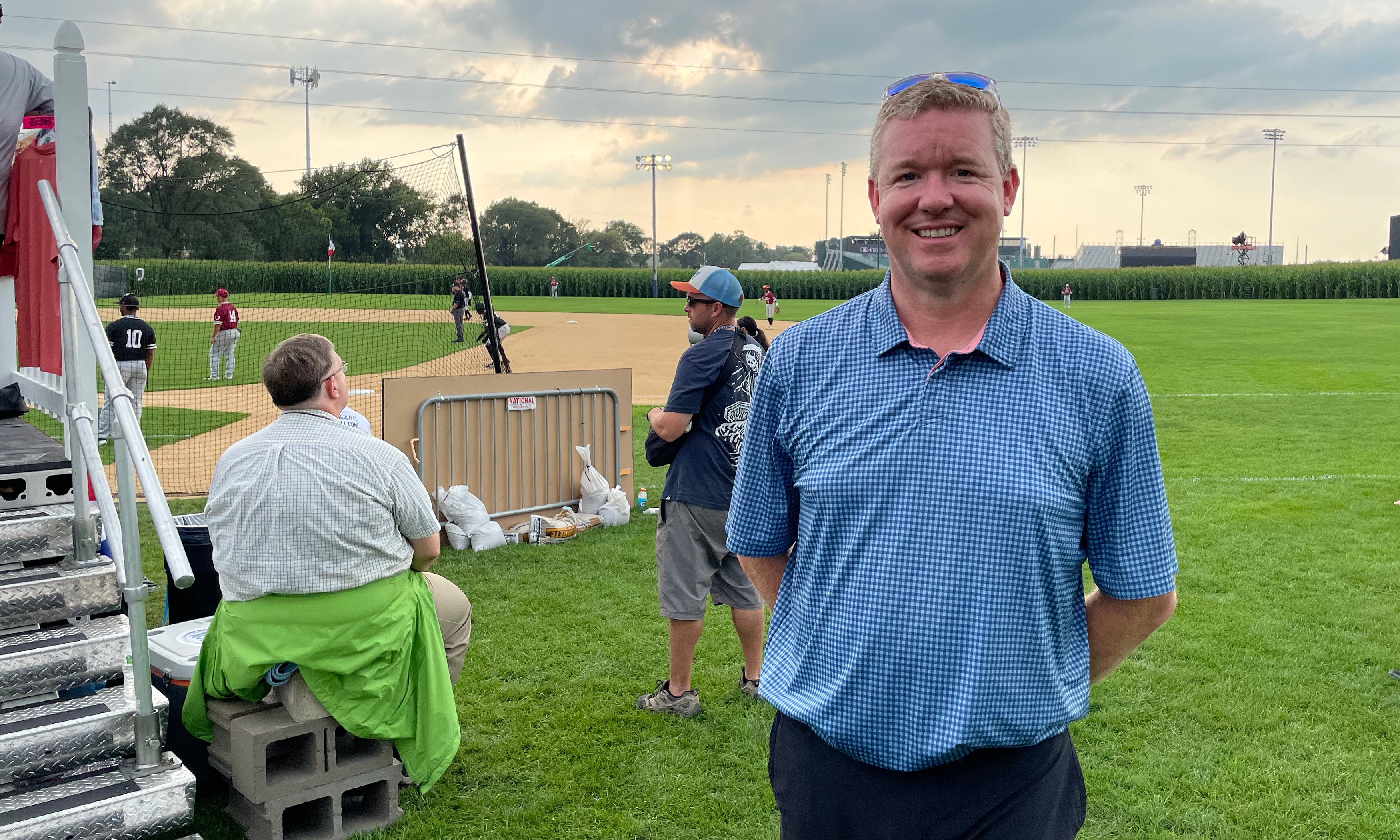 “In some ways,” says Davies, “the whole event seems kind of like a golf event. You’ve got the blank slate of a venue; you have the weather to deal with. Crew has long distances to travel in golf carts. I think we’ve gone to the well on a lot of things that we used to do with golf and utilized some of those techniques here, at least for the setup and some of the organization.”

For Cheney, the fact that a broadcast of this size and scope can be done in a place so “remote” is a testament to the work that went in to building this temporary baseball palace.

“It’s amazing,” he says, “to see how far we’ve come technologically that we’re in a field in Iowa 40 miles from any city, and we have a gig of high-speed internet to interconnect ourselves to our facility in Los Angeles. The things that people built during the pandemic are applicable here in how we are working. We’ve made extremely large leaps over the past five years.”