On the Pitch: NYCFC Tweaks In-Venue Show To Welcome Full-Capacity Crowds Back to Yankee Stadium

The past 12 months have been a whirlwind for Major League Soccer. After 2020’s MLS Is Back Tournament in the Orlando bubble and the teams’ eventual return to empty home stadiums, some clubs in the league are seeing attendance return to pre-pandemic levels. Much like At the Ballpark, On the Gridiron, On the Hardwood, and At the Rink, SVG’s On the Pitch takes you into the control room with in-venue crews to understand what their job is like before, during, and after the official’s whistle is blown.

Amongst the hustle and bustle of New York City in 2015, Major League Soccer planted its flag in the concrete jungle and brought New York City Football Club, its then-newest franchise, into the fray. Since then, the boys in sky blue have slowly captured the hearts of fans in the New York metropolitan area. This season, full crowds are back at Yankee Stadium, and the production team is pulling out all the stops to entertain them.

“We faced so many challenges over the last year,” says Steven Kocal, senior manager, match presentation, NYCFC. “It took us a bit longer to get back to Yankee Stadium, but, in the end, it helped us out.”

In summer 2020, MLS returned to action with the MLS Is Back Tournament at the ESPN Wide World of Sports bubble in Orlando. During the competition, Kocal and his crew were stationed at home and took in the elements of these productions. At the time, they weren’t sure when the regular season would resume but took advantage of a teaching moment for when games did eventually return to the Northeast. 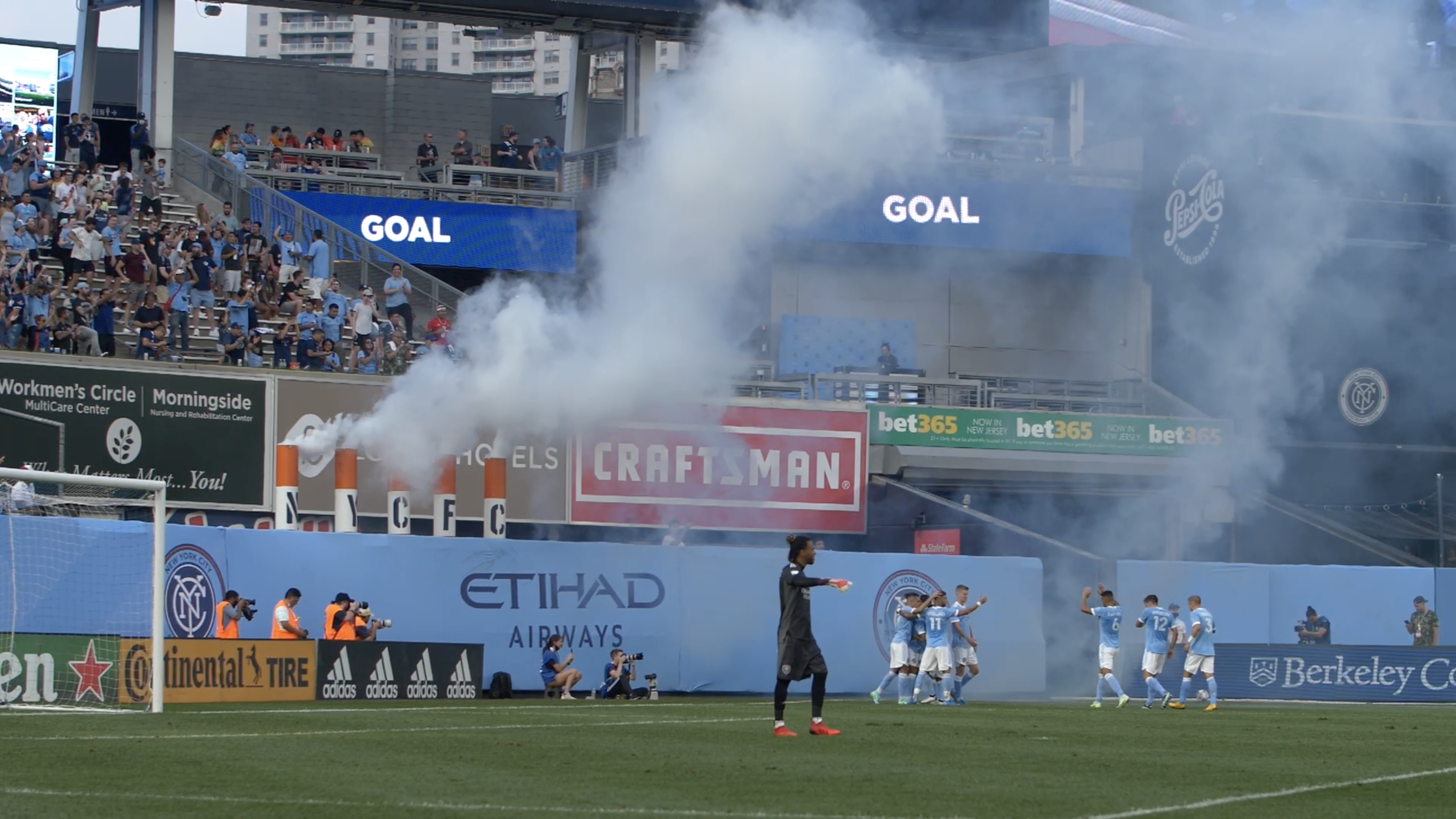 In-game activations, such as smoke after goals, are being played in front of fans again.

“We had the benefit of seeing what worked, what didn’t work, and what fans responded to well during those games,” he says. “It helped us out a lot on how we wanted to program our closed-door games from an entertainment perspective.”

When matches did come back, NYCFC played its home matches across the river in New Jersey at Red Bull Arena a few weeks after the conclusion of the bubble tournament. On Oct. 7, the match against D.C. United marked the first time the club and its staff played in the House That Jeter Built since Sept. 25, 2019.

Some MLS teams — Toronto FC and Orlando City SC, Real Salt Lake and Vancouver Whitecaps FC — have been working in tandem this season, but NYCFC’s partner has been by its side for six years. Working in a shared control room, the MLS club is aided by the scoreboard-operations and creative teams of the New York Yankees. In a season marked by the COVID pandemic, their workflows have been changed. 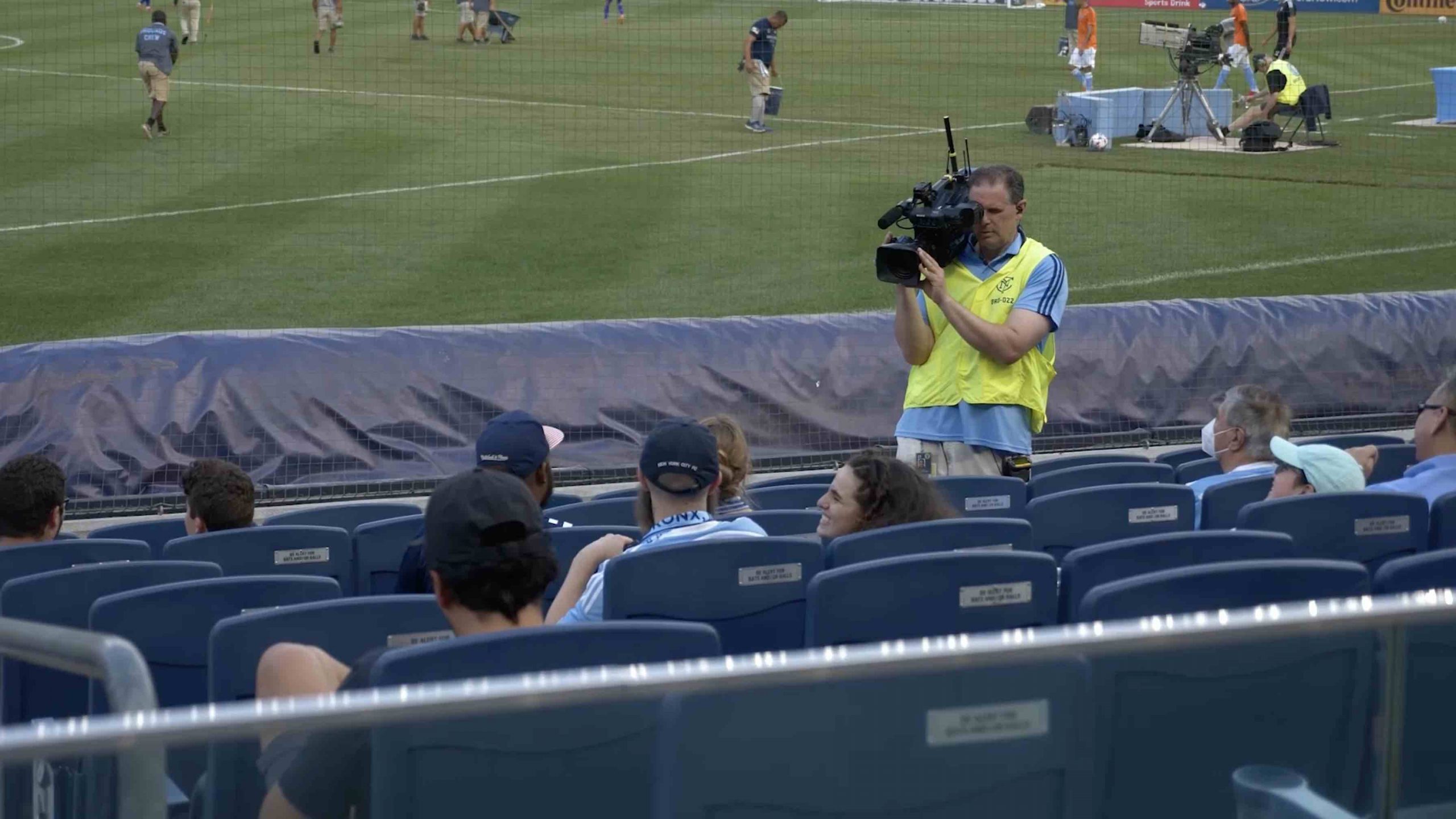 Wireless cameras are again being deployed in the lower bowl of Yankee Stadium.

“We have a really good relationship with them,” says Kocal. “Since we have simultaneous seasons, we’re in a unique situation where we don’t have as much access to the building as we would like. Sometimes, we’re having [the Yankees in-venue team] load content for us in the middle of one of their games.”

This extra wrinkle has called for NYCFC’s production team to work offsite in remote locations. For load-in, setup, and execution of the show, therefore, the pandemic didn’t much change the operation created years ago.

“We didn’t miss a beat since those systems and processes were [already] in place,” Kocal explains. “We’re in constant communication, but our past experience with them helped out a lot over the last year.”

A packed house is always welcome, but developing enough content to draw fans’ attention to the in-venue videoboard has been a challenge. At the beginning of the season, health and safety protocols didn’t permit producers and content creators to be in close contact with the players in a small room, and social media became a significant tool for showcasing the players and their personalities off the pitch. In other in-stadium content, a player would be stitched into a famous television show to play, for example, the role of a beloved character like Kramer in Seinfeld. 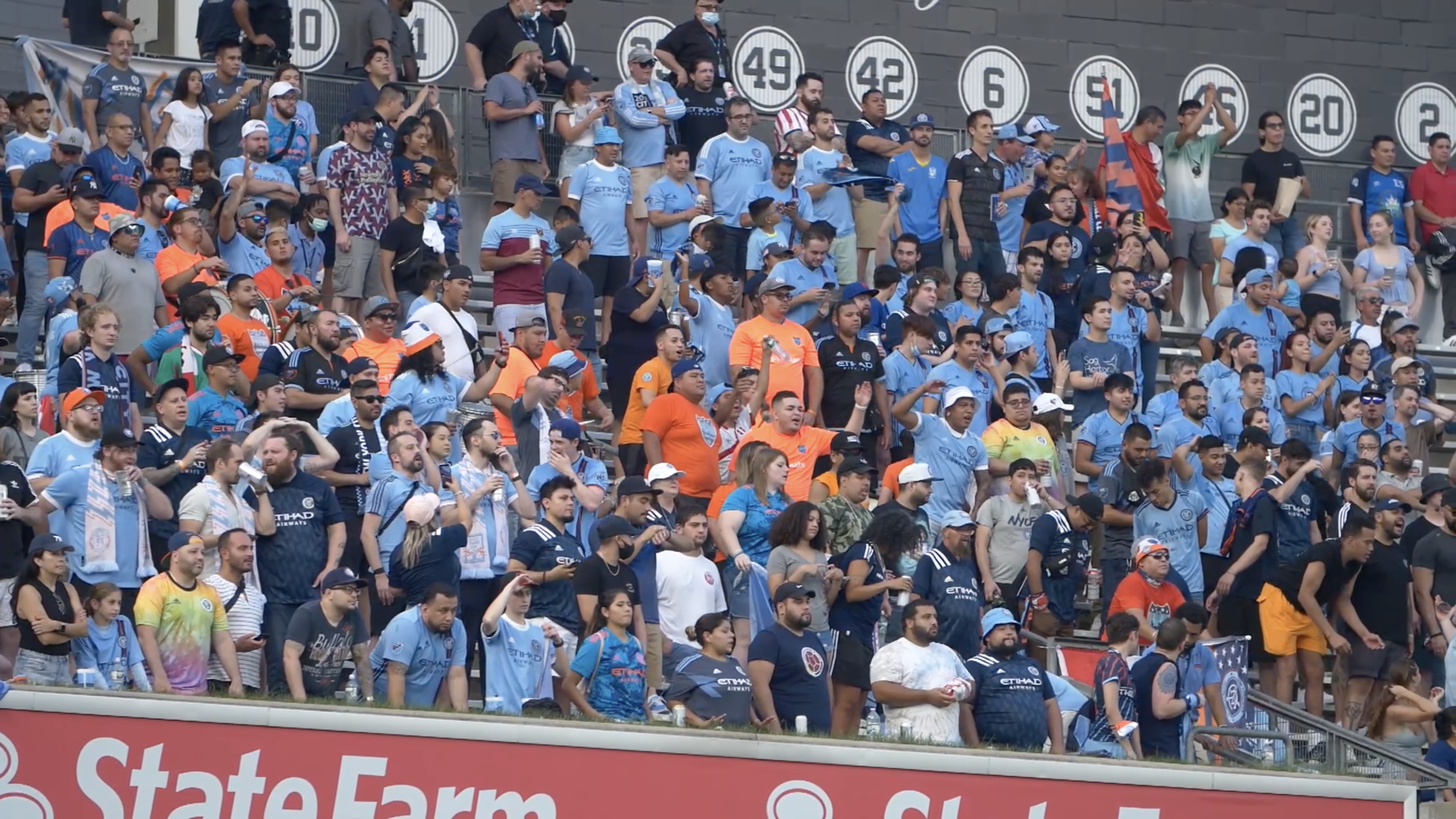 “One of our big priorities is to loosen things up and give our fans moments to laugh and enjoy themselves,” says Kocal. “We’ve pulled a lot of funny things that the players post on social media, run a lot of player features, and used the Reface app to mash up our players’ faces and drop them on characters from Dumb and Dumber and The Office.”

Now that the protocols have been loosened somewhat, the crew has more access to interact with the players. The content is as close to normal as possible, with in-person contests, Fan Cams, sponsorship activations, and more.

“[At first], we didn’t have our wireless cameras in the bowl for crowd shots, and our stadium MC wasn’t able to interact with fans face to face,” Kocal adds. “Going week to week with ever-changing restrictions and protocols has been tough, but now we’ve opened back up, and things are moving in the right direction.”

The Ones Who Get It Done: Shoutout to NYCFC’s Production Team 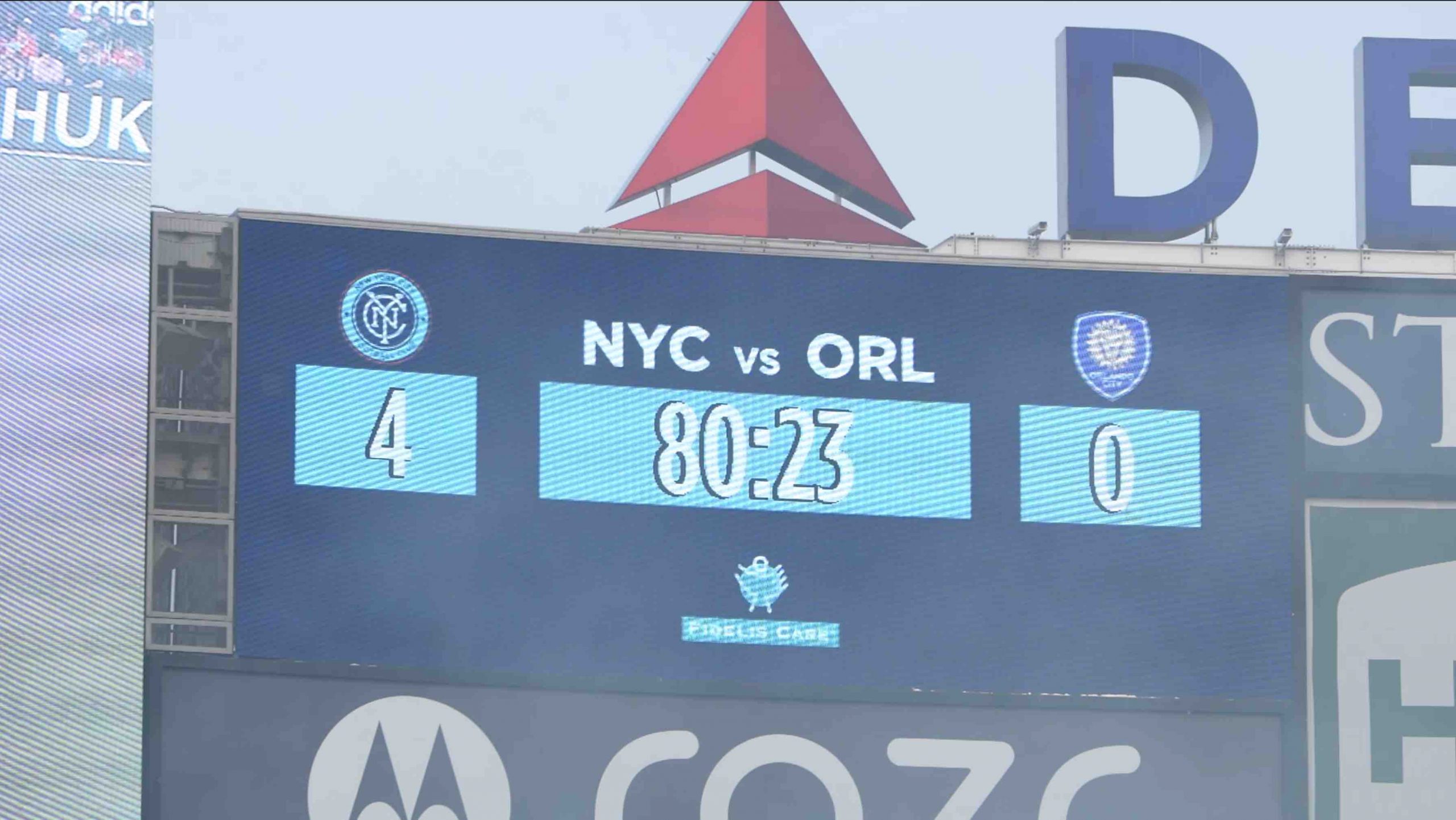 The club works closely with the New York Yankees to load content that runs on the videoboard.

With 11 teams in six professional leagues to follow, New Yorkers have almost constant cravings for live sports events and, now more than ever, are clamoring to head back to the ballpark, stadium, or arena. With determination and persistence, Kocal and his NYCFC colleagues are providing diehard fans the unique atmosphere that comes with a soccer match in the Big Apple.

“Our game-day staff has operated in multiple venues, dealt with testing on non-game days, and worked under all of these tough circumstances,” says Kocal. “They have been incredible over the last year with adapting to things on the fly.”