Live From the US Open: NEP’s Nick Romano on Collaborative Energy, Innovation of 2021

The 2021 US Open heads into its final weekend, and, for the NEP Group, it will close out an event for which more of its personnel than ever were onsite, overseeing world-feed operations, operations for selected rightsholders, Arthur Ashe digital boards, a virtual flash studio, and more. for NEP Engineering Manager Nick Romano, the event this year showed the power of teamwork, not only within the NEP family but beyond. 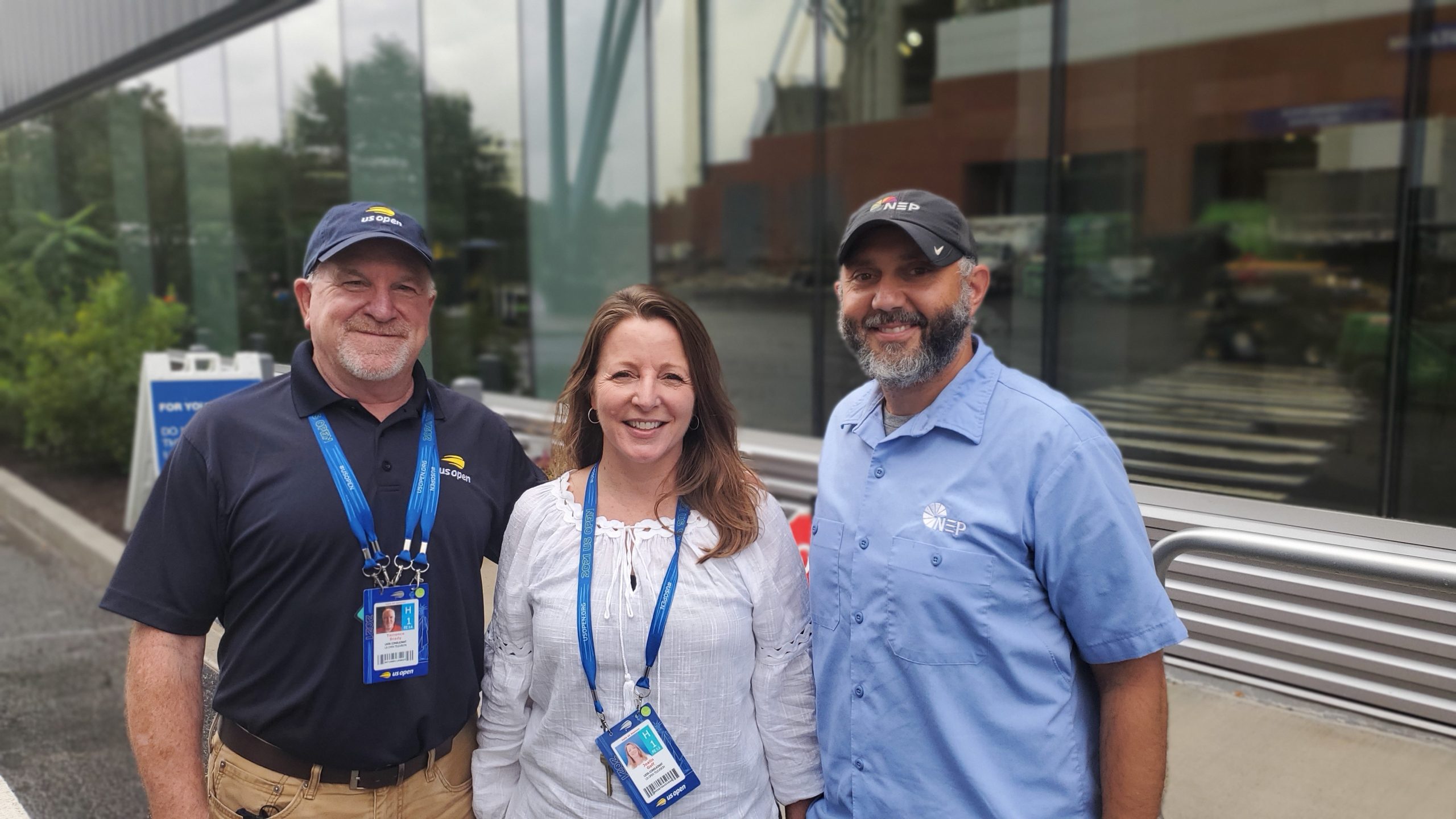 The US Open production effort is a multi-pronged one, with not only NEP but also Gravity Media, CP Communications, and others onsite working together.

“When we are onsite, we just make sure that everybody’s clients’ needs are met and the show goes as flawlessly as possible,” says Romano. “We’re working hand in hand with Gravity Media to put on a good show all the way around for the USTA, ESPN, and all the rightsholders. I’m just proud to be a part of the team that brings this together.”

The US Open compound is dominated by three core buildings: a two-story production facility home to ESPN’s domestic and core world-feed coverage, a second ESPN two-story building for production operations, and a two-story broadcast building that is home to the USTA, rightsholders, and more. The USTA compound does still have traditional production trucks playing key roles, most notably NEP’s Chromium and Nickel.

“We’ve used them for the world feed and the good part is they are 1080p- capable so, in subsequent years, when there is a need to go 1080p, they won’t need to change,” says Romano. “[Chromium is] a great truck, and the crew and operators [are familiar] it, so the world feed runs as efficiently as possible.”

ESPN’s interactive-TV service also is produced out of a truck, and, this year, those operations moved to NEP Supershooter 9.

“That truck is also 1080p, and it has a crew that is just as incredible,” says Romano. “The truck and we’ve gotten a lot of good results out of moving from NCP VIII. We have a had great run-through year of 1080i in the truck as we prepare for 1080p. The good part is that we’re ready for next year, whatever it is, and we have vetted the workflow.”

One of last year’s efforts that let the full NEP Group flex its muscles was the use of Creative Technologies to create a virtual flash interview room. With rightsholders unable to be onsite, the room allowed players to sit down for interviews in a green-screen environment with maximum safety.

“That was a huge hit last year, and the USTA wanted to bring that back,” says Romano. “We added a couple of small nuances for backup-streaming capability so that, if somebody couldn’t take the transmission the way it’s currently going out, we can give them a URL and pass along an SRT feed.”

Cincinnati-based Lightborn Communications knocked it out of the park, he adds, with work on the virtual graphics, which give rightsholders around the world a studio environment reflecting the US Open and New York City. It’s all part of an effort that has received positive feedback from everyone, he says.

“The players like it because it’s a controlled COVID-free environment with robotic cameras,” he notes. “They contact only one person, and that is the person putting on the IFB. There are no microphones, and the earbuds are disposable, so [Creative Technology Project Manager] Jeff Chenery and his team have done an amazing job every day.”

The US Open green-screen studio is a concept that Romano says could have applications across other types of events and at all levels. At the Open, it allows players to be interviewed by more media outlets more easily than ever, and there are plenty of other sports and other events where the goals are the same.

“This is a major world-class event, and we’re doing it at a world-class level,” Romano says. “But there is flexibility to change the level of production for multiple uses. I think we’re just at the tip of the iceberg. It would be perfect for things like press junkets, and I look forward to any opportunity that we can get involved in because this technology is sound. It’s an all-around great effort.”

In February 2020, NEP acquired Australia-based Mediatec and folded it into Creative Technology. Mediatec began providing in-venue digital signage behind the baselines at the US Open in 2019 so the acquisition in 2020 gave additional fuel to efforts that are transforming the Arthur Ashe fan experience.

“The product they use is absolutely amazing, and we do our best to work with everybody to get the best out of it,” says Romano. “It serves multiple purposes, but it just looks phenomenal and amazing. We look forward to more options as we move into the future and to show what NEP can do. It’s another example of just being at the tip of the iceberg.”

The NEP team at the US Open is a bit larger than last year’s, mostly because NEP is now handling technical needs for Wowow’s rightsholder needs.

“We provided the engineers and additional tech manager on board to help make sure that we were ready for them,” says Romano. “We wanted to make sure they were taken care of when they returned here for their first year in the new building.”

The use of internet streaming to deliver live broadcast-quality signals has given NEP Media Solutions a chance to play a role for the practice courts. Robotic cameras cover those courts, and the signals are available to rightsholders via SRT or Zixi streams.

The use of internet delivery as opposed to traditional video circuits does require some additional work up front. He says his crew works with rightsholders to determine the internet speeds available and to iron out the nuances of a new workflow.

One thing that has helped is that the USTA hired two former ESPN veterans who are very familiar with the US Open and the unique aspects of the event. He says that having Terry Brady and Joalin Goff on the USTA team made a difference.

“They were invaluable people as their knowledge of this event covers every angle,” he says. “I was very happy to see that they came on, and they’ve helped not only my NEP team but also the USTA, ESPN, and Gravity Media. It just gives a sense of comfort to know that they were able to step in and provide that help.”

Next year’s Open will see the building and the way the teams work evolve as they take on new challenges. The good news is that the permanent building and permanent fiber infrastructure will make things easier both next week and next year.

“The new building means less tear-down, and a lot of things like connectivity can be done before rightsholders even show up,” Romano points out. “We can hand them a list letting them know their transmission paths as soon as they arrive. In the past, not only did they have to search and find out where those signals originated but then they had to run all the cable and do those types of things. Now the connectivity, the power, and the HVAC are all right there for them.”

He is looking forward to refinements not only with the technology but also with the team, which has another year under its belt.

“The NEP team just keeps getting better as we refine what we do,” he says. “And the all-around US Open team did a phenomenal job of making sure that we were ready, people were safe, and we were able to put on a production. We came out of this the best you could possibly hope for because we were hit with everything, and I think everybody managed to navigate it pretty successfully. Having a great technical-management team with folks like Jimmy Grgurich, who tech-managed hockey for NBC, and Dan Johnson, who has worked on PGA events, helped our comfort level because we can all work on separate tasks and know they will get done.”